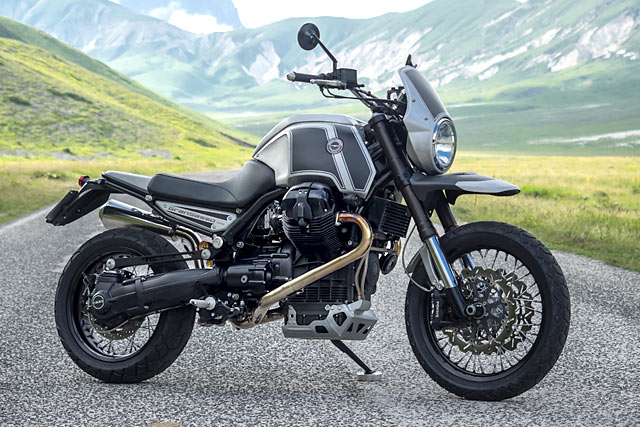 There’s no argument that Italy’s Officine Rossopuro do the best-looking Moto Guzzi customs on the scene. The head of the shop, Filippo Barbacane, never takes the easy route with his builds. He mixes and matches engines and final drive components, he crafts bodywork from scratch and the end result is always a show-stopper. And finally he’s decided to show us his own personal ride – a Moto Guzzi Stelvio two years in the making. 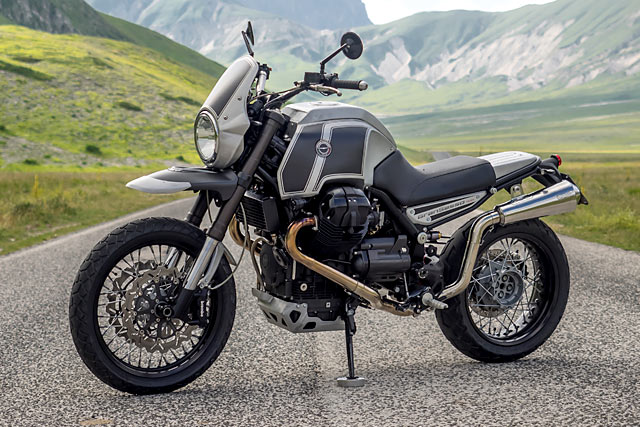 Well, I say it’s been two years in the making but Filippo has had the Stelvio in stock trim as a daily ride for a few years now. And he’s travelled all over Europe on the big adventure bike, amassing 100,000 trouble free kilometres. “It’s an exceptional bike,” he says, “But it had some things I wanted to change.” 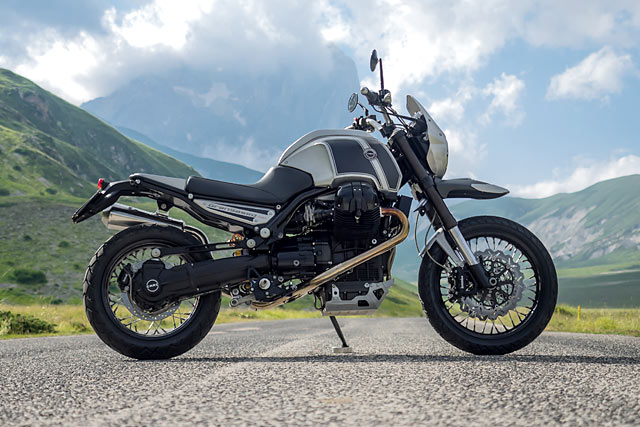 After 100,000kms of touring you’ll be as curious as I am to figure out what could be wrong with the Stelvio. “First of all is the weight,” he says. “I think it’s the most important thing about a motorcycle. I don’t care about horsepower. I’d prefer a light bike over a powerful one.” The second change would take more work than just trimming parts. “The newer 4 valve engine heats up and has a lot more mechanical noise and has many more parts that make it more complex and heavy.” 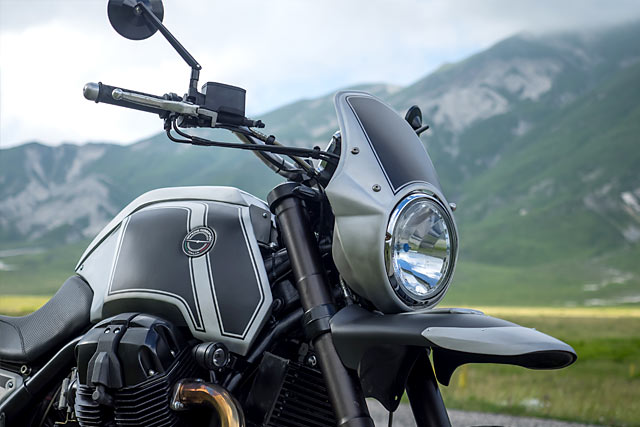 The solution? Swap the engine out for an older model. He mated a 2 valve engine to the standard Stelvio chassis to take advantage of, in his opinion, the best powerplant that Guzzi has offered. “It’s the best engine of all time,” he declares, “It’s a unique mix of mechanical and electrical simplicity. Without any modern trappings I don’t particularly like.”

“It’s the best engine of all time.” 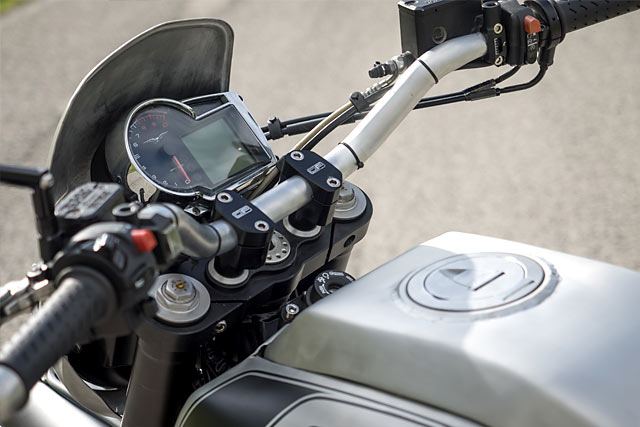 So with the idea for the ultimate Guzzi in his head and with the added incentive of the bike being a rolling advertisement as he travels the continent, he set to work. Firstly, he pulled out the grinder and removed all the unnecessary tabs and brackets. Next up was the rear subframe, which was altered to be removable and made from chrome molybdenum steel. 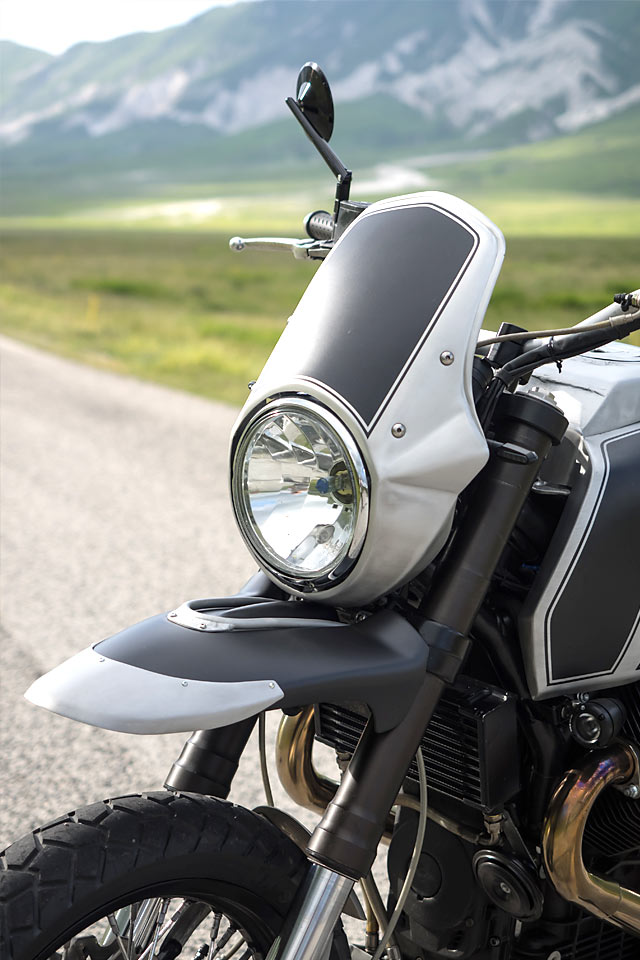 High quality suspension was also fitted – a 50mm Marzocchi shock at the rear and Extreme Tech fork internals at the front. The rims are Alpina tubeless models, running a 110/80/19 front and a 180/55/17 rear with the always-excellent TKC 70 tyres. With all that done Filippo had a rolling frame and a good idea of the stance when he started the bodywork, beginning with a long-distance fuel tank. 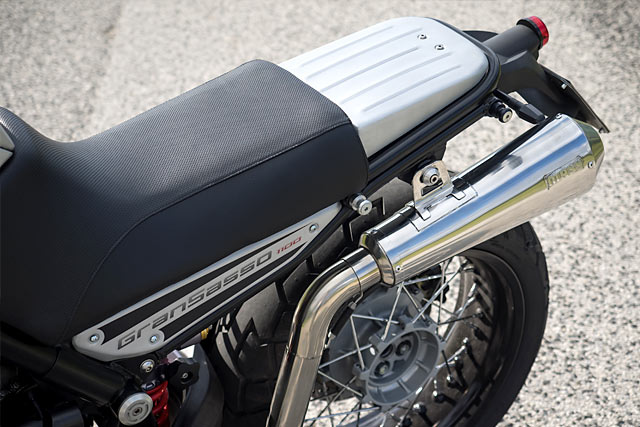 “I designed something functional and made just for me,” Filippo recalls. “I built a very large aluminium tank to take on long journeys.” But here is where a little bit of Filippo genius slips in. The gas tank is made up of a huge central section and removable side covers. So if the bike takes a dive they can be replaced easily and he can be on his merry way. 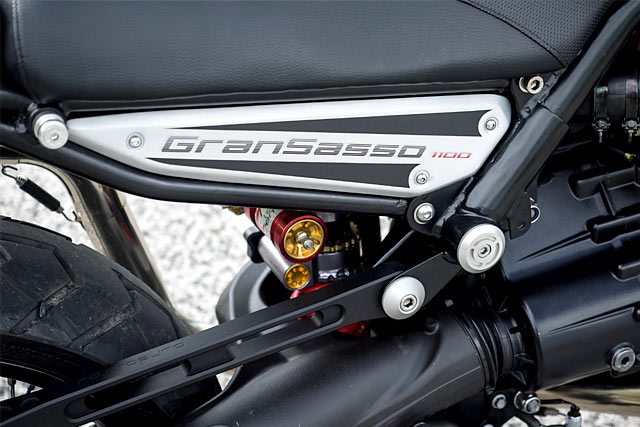 There’s other smatterings of practicality throughout the build that I love. Those covers can be replaced with carbon versions that hold tools and spare parts. The rear frame can be dismantled with an electrical system that is all connected to quick plugs. The seat is adjustable and in height and still has a quick release mechanism. The rear aluminium hump can be replaced with a passenger seat or a rear bag and there’s a rain suit and a tool kit hidden under the whole assembly. 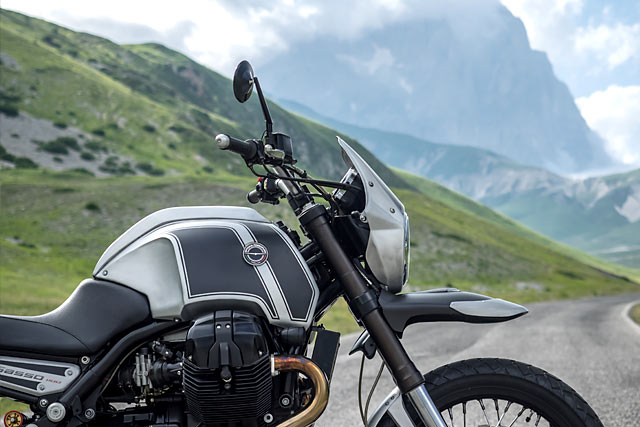 There’s plenty more. The fairing that can be replaced with a hard-wearing plexiglass model for longer trips. The traditional light bulb used instead of LED so it’s lighter and can be replaced easily. Two small LED spotlights. The front fender with an aluminium peak on it. The engine guards, the hand guards, the ability to take pannier brackets… it’s a bike that’s designed to be ridden. And ridden a lot.

There’s a whole heap more to this Guzzi than we have time to cover here. But suffice to say that it’s an exceptionally gorgeous and well-thought out bike that is a rarity on the custom scene. Filippo has outdone himself yet again. And most importantly, he loves it. “I’ve ridden hundreds of bikes,” he says, “but the feeling of riding the GranSasso is exceptional. It goes around curves perfectly and is now 70 kilos lighter than the standard model. It’s my ‘definitive’ motorcycle. Unless I have some other ‘definitive nightmare!” 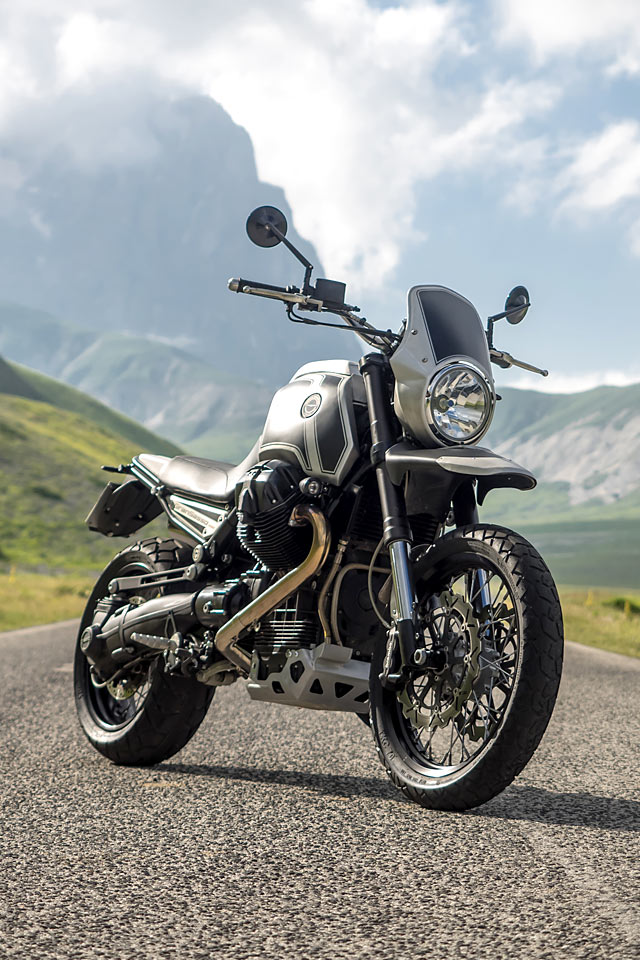