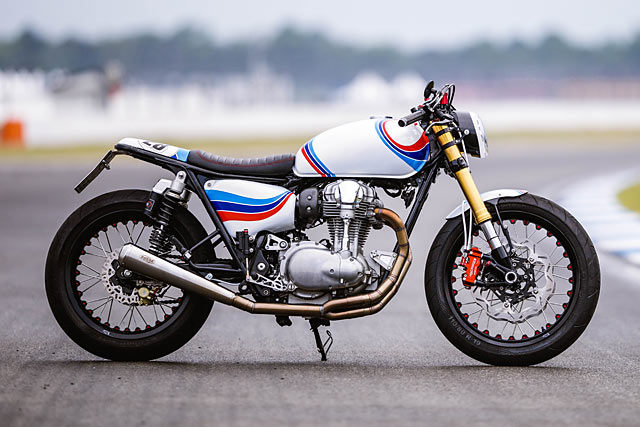 As modern retros go, Kawasaki hit the nail on the head with their re-imagining of the W series bikes from the ’60s. In fact, the ‘new’ W’s bevel driven twin cylinder engine is even more of a classic than the original. But as an overall package they’ve always needed a little more panache and nobody does it better than the W whisperer himself, Tom Thöring of Schlachtwerk. Fresh off the back of their insane W650 drag bike, the German shop returns with No. 28, a 2011 W800 and it’s perhaps their greatest street bike yet! 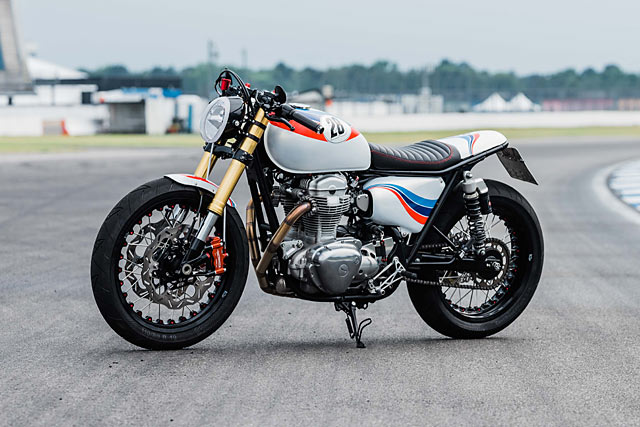 For most workshops that might simply be because they’ve only built a few of a certain model but Tommy makes his living building all kinds of brilliant W series machines. From cafe racers to scramblers and some classic vintage builds he refines the Kawasaki creation in the best possible way. But when a client told Tommy his daily W was a little dull, it was all the incentive he needed to create his finest example. “The guy owns a driving school, and is a racetrack instructor, so I think the W was a bit boring for him in the standard version. He wanted something special, with more performance, and something different, compared to my usually slimmer builds,” explains Tommy. 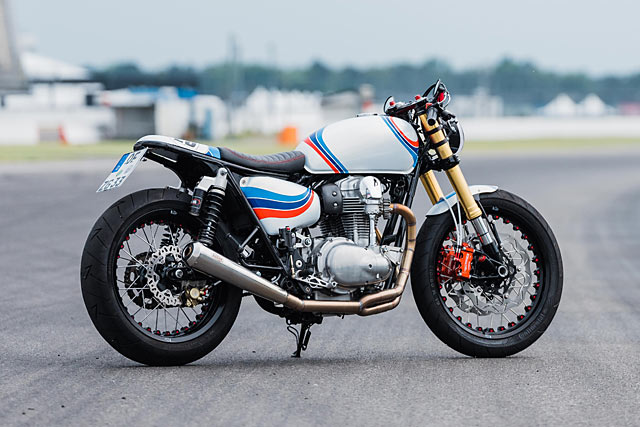 It all started when the client, clearly a keen biker, decided to turn his BMW S1000RR into a full on race bike. He had purchased a set of Ohlins forks and had the standard set spare “One of his question was: are you able to put these in my W800? I said yes, it’s not so easy, because of the wheels and brake, but its possible,” explains Tommy, the wheels already turning over in his mind. And fortunately there was no rush on the build, allowing time for the design to form organically and a collection of big dollar parts to be bought so that everything was ready when it came time to spin the spanners at Schlachtwerk. 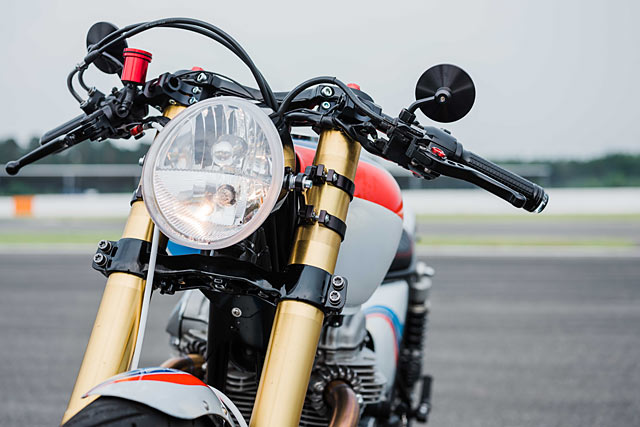 With the W stripped down the first task was working out how to fit the fully adjustable 46mm USD forks to the frame. There is the simple way and then there is the right way and Tommy wasn’t going to be cutting corners. With all the right pieces in place, some machining work taken care of and a new set of bearings it all slots together to create the ultimate front end. To balance things out the swingarm was fitted back up and measurements taken to send out to Wilbers to put together the rear shocks. They sent back a pair of custom-made twin shocks, with remote reservoirs and progressive rate springs; this W handles likes it’s on rails. 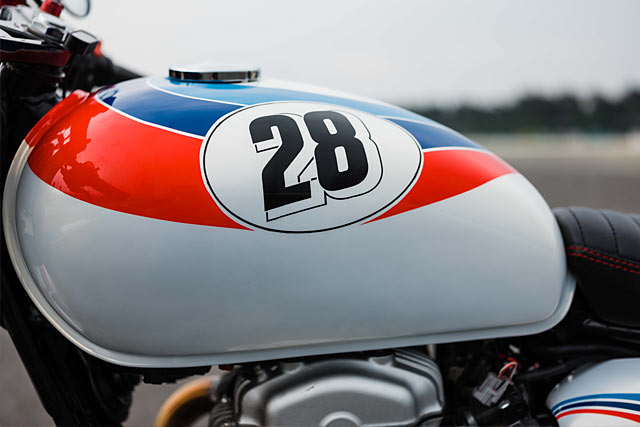 “I know (the Beringer Brakes) are overkill for a stock 48hp bike, but they are really nice.” 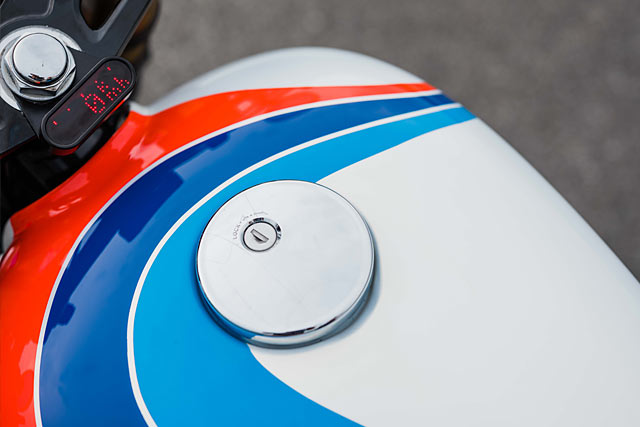 If there is a better W800 roller, I’ve never seen it and Tommy wanted to make sure the visuals lived up to the rest of the package. Based on the client’s instructions he fabricated a sleek tail cowl, with very little junk in the trunk compared to most cafe racer styled units. This means there isn’t a lot of room for battery or wiring storage but that’s been expertly rectified with a set of Schlachtwerk’s own side panels. With the fork conversion Tommy made a blade style fender and round bar struts to keep it tyre hugging. All the pieces have been given a stunning paint job with the crystal white complimented by the twin blue and red graphics. 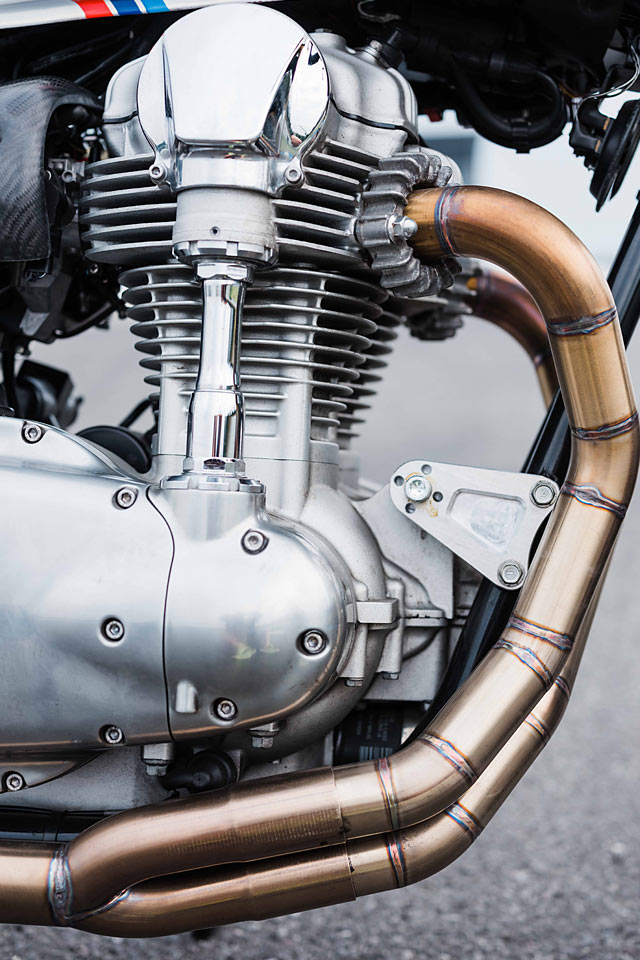 The nearly 800cc twin is no power monster but with the quality of the rest of the build Tommy wanted to add some extra ponies. With the airbox having been removed a pair of shielded cone filters feed the fire. But it’s always been on the exhaust side were Schlachtwerk shine and once again the 2 into 1 custom exhaust is a beauty. Picture perfect welds on the stainless steel system lead back to a rear can with an internal catalytic converter. Suddenly the small factory figure jumps from 48hp to a far more respectable 60hp and it all spins up much faster with a modified flywheel. 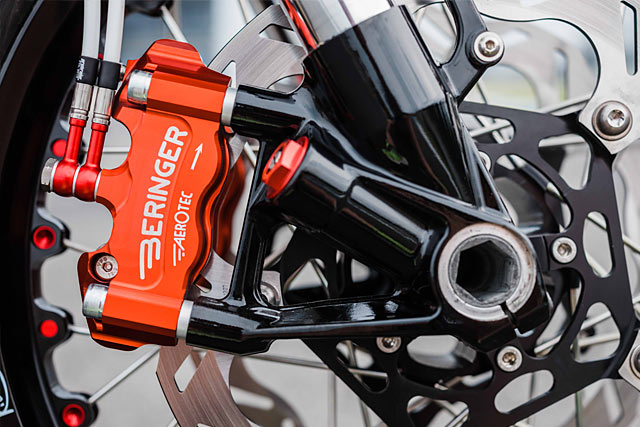 But the usability of the power and smooth running comes from a too often overlooked area of performance, but not when Tommy is concerned. A Power Commander is fitted so that the tuning, particularly the fuel map, can be fine-tuned to make the most of the breathing modifications. It’s all part of the total re-wire the bike has undergone with an m-Unit from Motogadget taking centre stage, joining the companies mini speedo and bar end indicators. While the rear indicators are tiny Kellermann Atto’s and the taillight has been perfectly frenched into the frame. 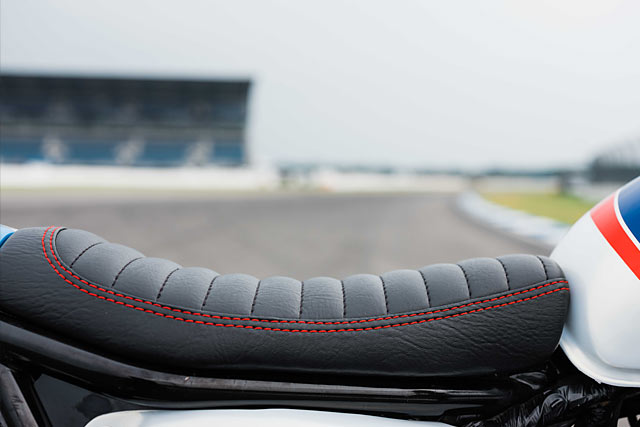 The modern headlight conversion transforms the front on look of the retro Kwaka with custom mounts pulling it hard up against the forks. The controls complete the incredible build with a set of LSL clip-ons giving the Magura HC1 master cylinder a place to call home. The rear brake conversion required the installation of a master cylinder and the rearsets that operate it and the gear changes are top shelf! Finishing the bike made this Schlachtwerk’s 28th full custom, which as luck would have it is also the client’s race number. It was the perfect end to the perfect build and with a W800 this sweet that BMW race bike might be collecting dust for a little while to come. 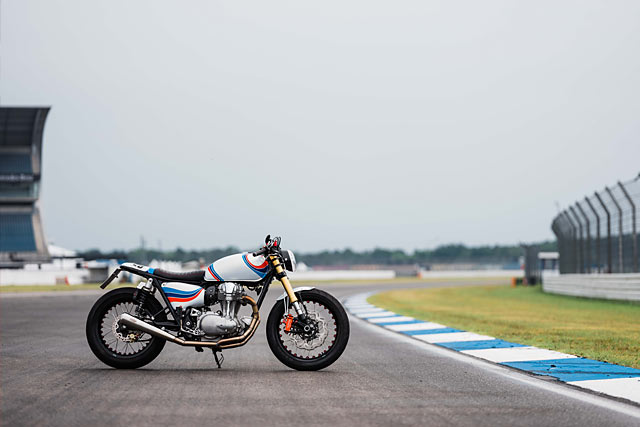