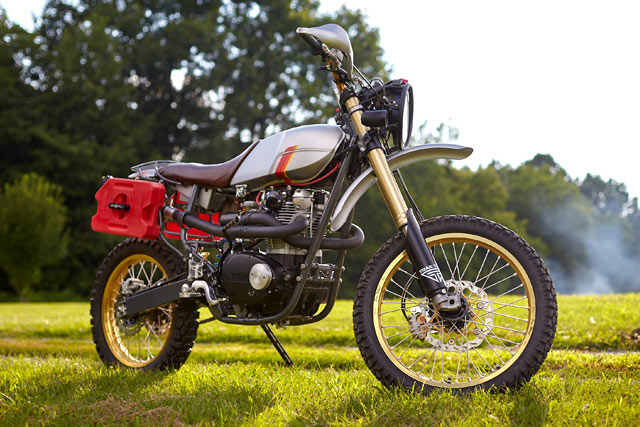 If it’s true that one’s destination is never a place, but always a new way of seeing things, then surely a trip to the Himalaya’s can lead to a vision where anything is possible. The Yamaha XS650 has been a mainstay of the custom motorcycle revival and even before they were being cafe’d they were being cut up and bobbed. But it took Kacey Elkins of Stanford, Kentucky, to adventure towards the world’s highest peak for us to finally see the mighty twin transformed in such a way. The Krossover Customs craftsman calls it #45 T.A.T Special, we say it’s the coolest XS650 Adventure bike we’ve ever seen. 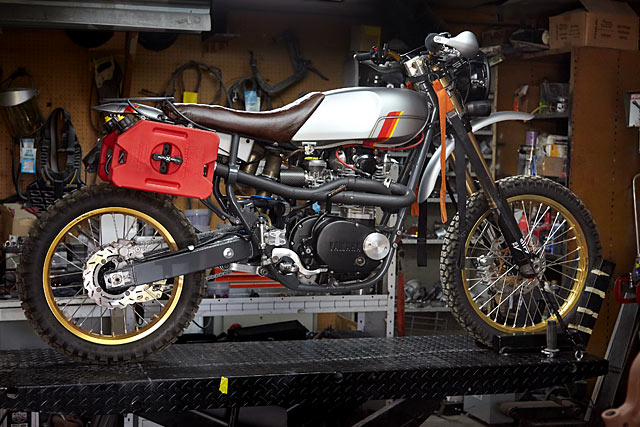 But as Kacey explains the journey to Dual Sport nirvana started well before he ventured over the ocean, “I had actually built this bike originally into a cafe bike a few years back for a good friend of mine with his help on a crazy four-day alcohol fuel weekend, surprisingly it went really well but after about a year he disassembled the entire bike to build something else then lost interest in it, then he called me and asked if I wanted the basket case bike and that was that.” 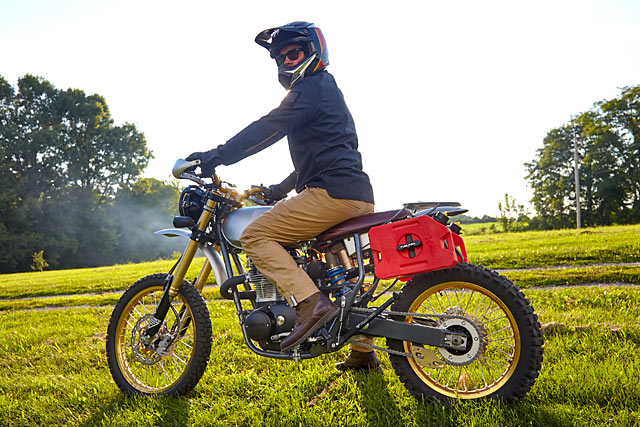 Pretty sure the smoke comes from the other end

Not yet sure how he’d transform the bike, a jaunt to the Fuel Cleveland show had Mr Elkins walking away as the lucky winner of a trip to ride in the Himalayas in Nepal with Himalayan Heroes USA and Old Bike Barn. It was here on this epic adventure across rivers and snow that he came up with the idea of building an old bike into a custom Adventure machine. With the end goal of being able to ride the TransAm Trail across the continental US of A. “If you don’t know the trail it’s around 5000 miles of dirt and gravel trails that goes coast to coast,” explains Kacey. 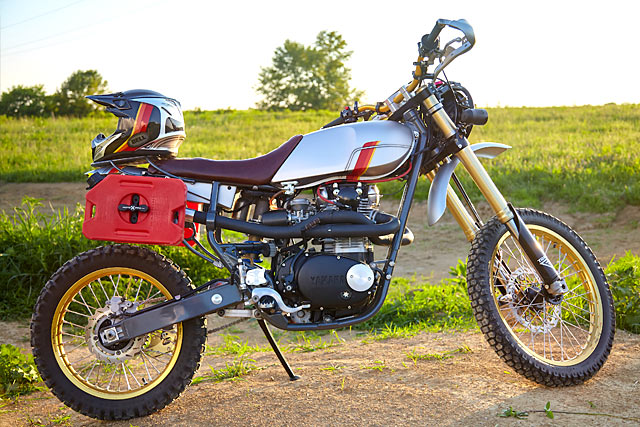 One thing he knew he needed for certain was plenty of suspension and a setup that could handle any and all terrain that he could throw at it. This meant the standard stuff in any guise just wouldn’t cut it and the first addition to the frame was a set of Honda CRF 450R forks. The big USD items with beefy forks give the bike the travel and dampening required, while the brake setup of a large single caliper and floating disc provide all the stopping power. A gold Pro Wheel gets the job laced to the Honda hub and it’s all wrapped up in an SR244 Dual Sport tyre.

“One thing he knew he needed was plenty of suspension and a setup that could handle any terrain.“ 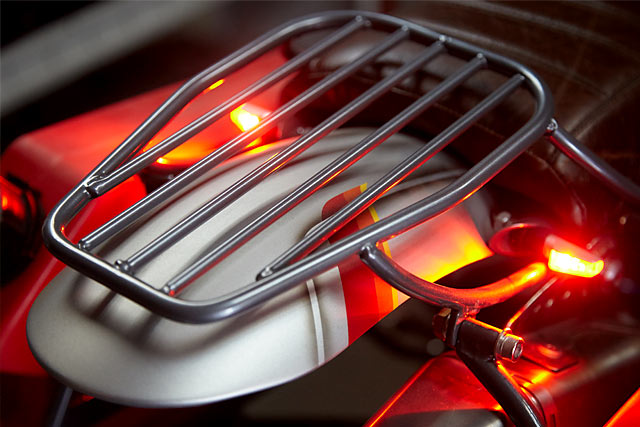 At the rear end the changes required a little more finessing with the decision made to ditch the standard swingarm and twin shock setup. Mated perfectly to the 1981 Yamaha frame is a modern dirt bike swing arm from a Honda CR250. Further modifications to the frame allow for the fitment of a 2017 Kawasaki KXF 450R Showa rear shock and the local parts yard had to be wondering what the hell was going on over at Krossover. The rear gets an 18in Pro wheel and SR244 tyre combination with a tusk rotor to finish it out. 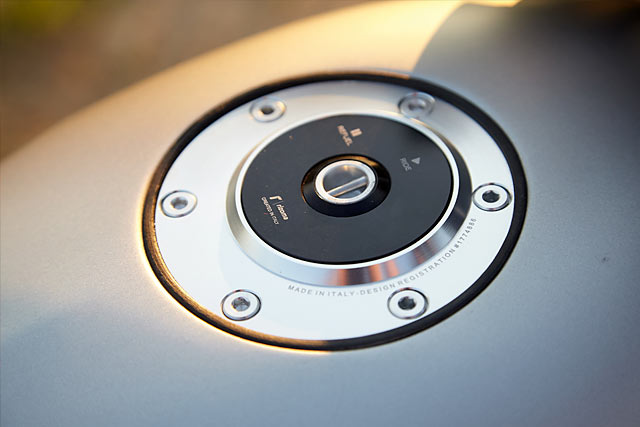 But while Kacey was making the changes to the frame for the suspension he was also modifying it for further form and function. On the right side that includes a clever loop in the lower subframe support that allows the custom 2 into 1 exhaust to quite literally pass through the frame as it ends under the seat with a dirt bike rear can. The rest of the glorious twin cylinder engine has been restored to absolute perfection; looking better than it ever did leaving the Yamaha factory floor with painted side covers, raw machined work and a new kick-starter with leather wrap. 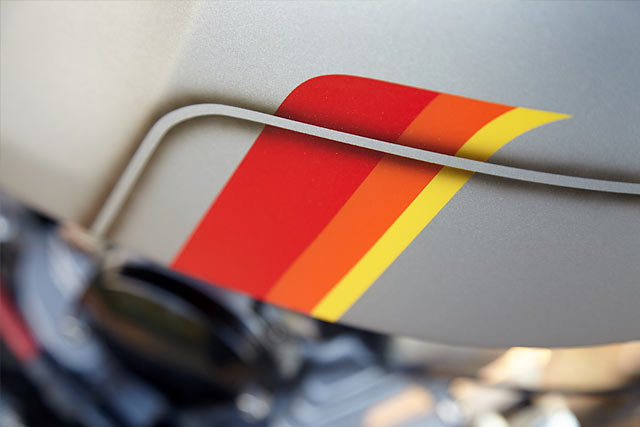 As you’d expect from the award-winning painter the tins are absolutely flawless with every line arrow straight and the colour laid down to perfection. Starting at the front a high-mounted rolled fender keeps the worst of the mud and muck off the air-cooled engine. The gas tank has been narrowed for the sleeker look before a trick Rizoma filler cap was fitted neatly in. At the rear the fender protrudes just far enough back while also merging seamlessly with the cover storing the electrics. 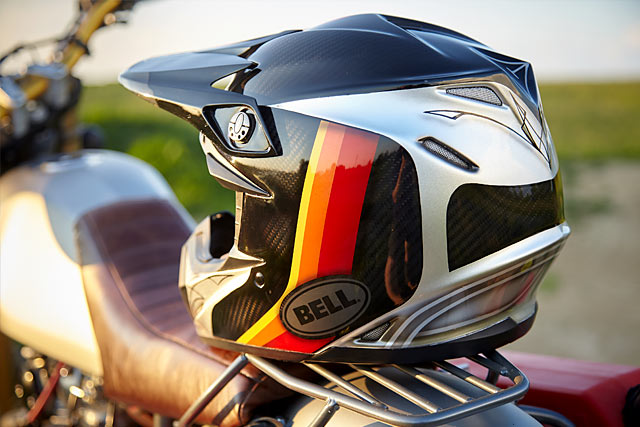 Sitting on the new subframe is a hand fabricated seat that is designed to have the dirt bike look while matching the bikes styling with its leather covering. Kacey also fabbed up the luggage rack providing plenty of capacity and also swinging the supports for the pair of Roto Pax fuel cells. They provide the extra range while a serious lighting package makes night-time riding a breeze, “I used Trail Tech for the headlight, fog lights and they’re awesome speedo that doubles as a GPS for the trail, I also used their kick stand,” says Kacey. 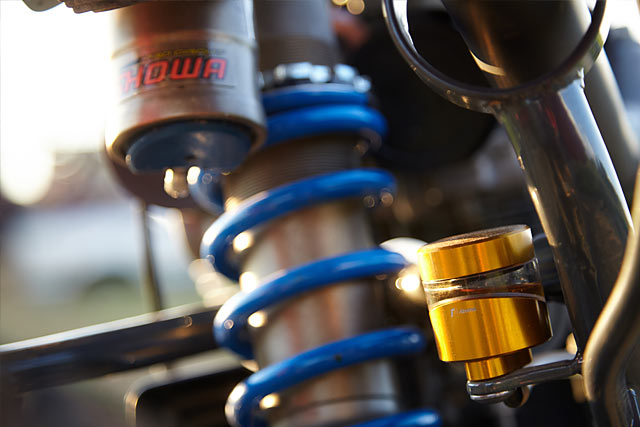 When only the best will do

Then it was time to dive back into the Rizoma parts catalogue for the bear trap foot pegs, turn signals and brake lights. A set of bark busters have been colour matched and the lethal spray gun spinner also tricked out his Bell helmet to match the bikes colour scheme. Before calling it done, plenty of time was spent getting the Yamaha’s suspension setup just right and dialled in. Now with the bike flawlessly finished its time to drink in its beauty one last time as the Krossover Customs #45 T.A.T Special is about to live a very hard life and Kacey can’t wait.“ I started with an idea and it turned out exactly like the bike I had in mind. Now it’s time to go beat it up on the trails!” 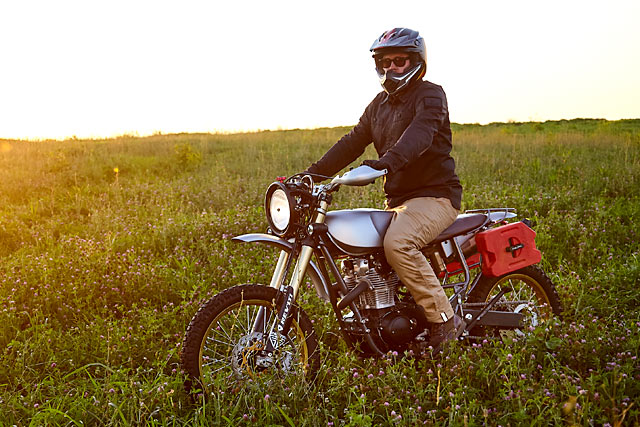