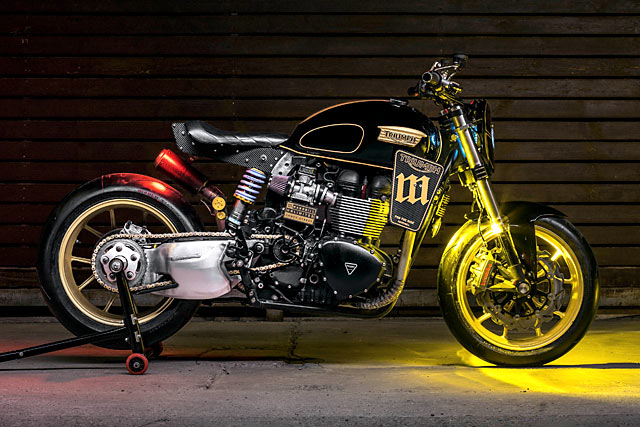 It is home to the 21st century’s most vibrant and powerful economy, with millions of high-tech products created there every single day. Yet China is also a land with a rich history, a remarkable culture many millennia old and Confucianism that has spread great wisdom to the world; so where else would you expect to find a bike builder that likes to take modern retro machines and give them a futuristic touch! Beijing’s best builder is back, as Luo Hao of Mandrill Garage transforms a traditional Triumph T100 into an out of this world Sci-Fi slaying racer he calls Power Street. 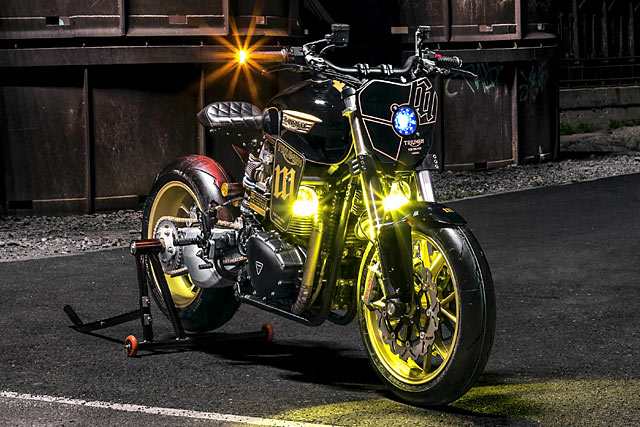 Things are booming in the custom motorcycle scene in China, even if much of it is not seen, Mandrill Garage is proof positive of the explosion in demand for good builders. Luo tells us the team spent the first half of the year working non-stop, have a workshop full of builds underway and are well and truly booked out for the rest of the year. And it’s Luo’s particular style of bike building that is bringing them through the door. “Now people like to customise bikes, some like to make modern bikes to retro. But I like on the other hand to make retro bikes have performance, make it more futuristic.” 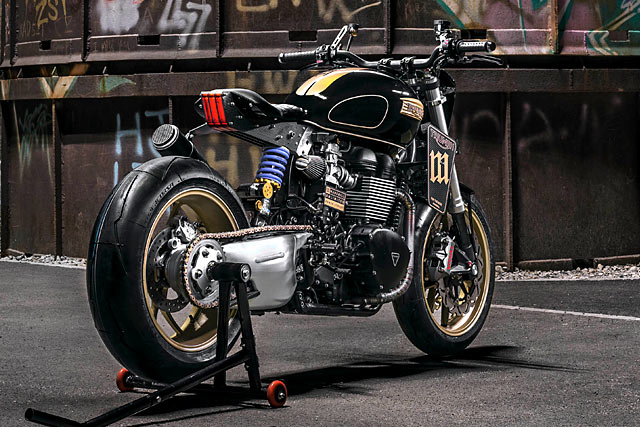 For this build his client brought him a very modern retro machine in the form of a 2014 Triumph T100, complete with spoked wheels, peashooter exhausts and plenty of old English charm. Just the sort of base Luo likes to give a futuristic touch too and he immediately got to work using his graphic design skills to sketch out a plan. “I kept the tank, because I wanted to keep something from the original.” But the rest of the bodywork would come in for a major overhaul and a variety of modern materials and techniques employed. 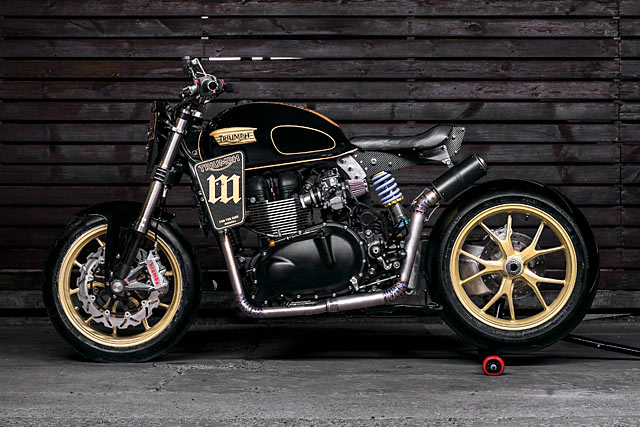 The front number board takes on a unique 3D appearance with inspiration drawn heavily from some of the Pikes Peak race bikes. That theme continues with the carbon fibre sideboards that funnel air in towards the engine, another technique used on bikes that race to the top of the mountain. Behind these is a pair of yellow lensed fog lights that join the LED headlight to provide perfect vision no matter the conditions. But the biggest change comes with the rear subframe, the entire back-end has been thrown aside and the swingarm ditched too. 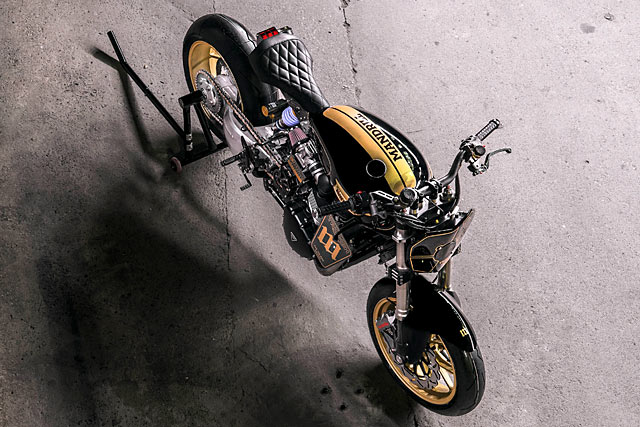 The replacement parts were all designed and modelled in CAD before the replacement subframe was made from carbon fibre and alloy. The billet machined alloy block provides the structural support and bolts through the rear hoop of the main frame. While individual pieces of cut carbon extend rearwards to provide the single leather seat a plaform and create a unique housing for the separate taillights to become one. Then the stunning paint work could be laid down with a deep glossy black joining the naturally finished carbon fibre, all of which pops thanks to the gold lines and logos. 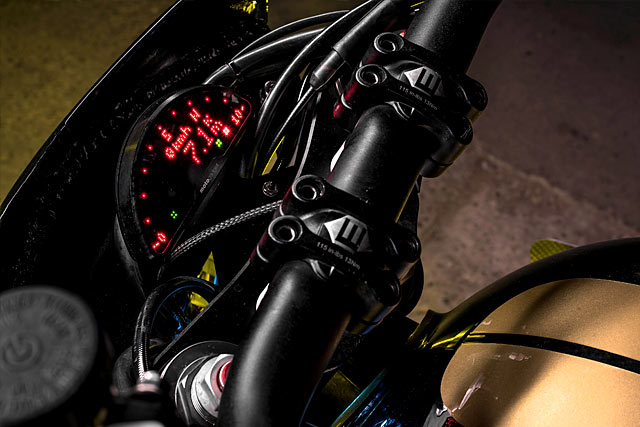 The racer’s new rear end features a stunning single sided swingarm from a Ducati 1098 with a big dollar Gears Racing shock controlling the show. Both front and rear share a set of gold Ducati wheels with the Showa forks also coming off a famous Italian sportsbike. But to allow them to fit the Triumph frame the Mandrill team engineered a set of one-off triple clamps that also ensures the geometry is spot on. Raidal mounted Brembo calipers make sure there will never be a lack of feel at the lever and the wave pattern discs are perfect for the look. While a set of Easton EXP bars and risers come from the motocross world to complete the upright stance.

“The new rear end features a stunning single sided swingarm from a Ducati 1098.” 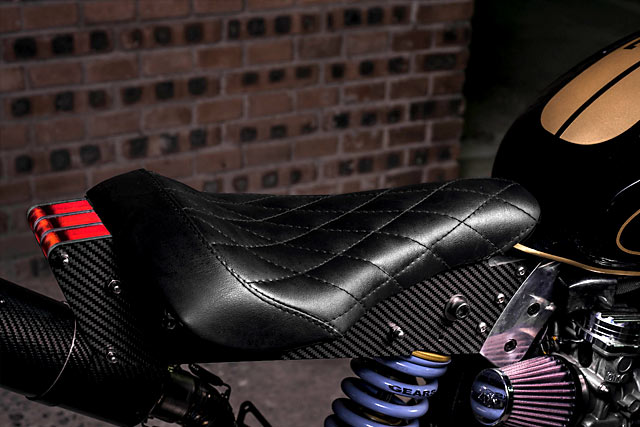 Providing the second element of true retro flavour is the ever-present Triumph parallel twin with 865cc gently throbbing between your knees. But although the power plant is a fitting piece for the modern meets classic combination the standard chrome exhaust with peashooters just wouldn’t do. Instead Luo has gone for the latest and greatest with a ridiculously lightweight system hand-built from titanium. All up with the GP inspired muffler the 2 into 1 arrangement weighs less than 4kg and looks a treat. To work with the new subframe a set of pod filters are squeezed in to replace the airbox. 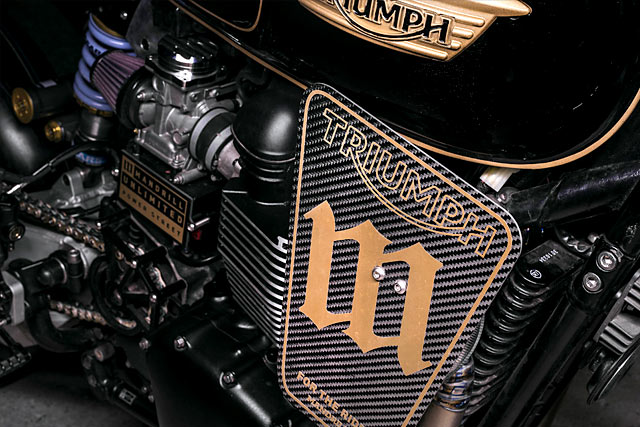 To get it all firing and with so much bodywork and seat area removed the bike has undergone a full rewire. All the work is of the highest quality with abrasion resistant sheathing throughout and starts up front with the brilliant Motogadget digital dash. While the bar end turn signals are also from the fine folks at Motogadget with one of their m-Units acting as the brains of the operation. Up on the bars are a pair of levers and fluid reservoirs from Brembo. Which gives away an interesting part of the build, a change to a hydraulically operated clutch for better feel and easier pull back at the lever. 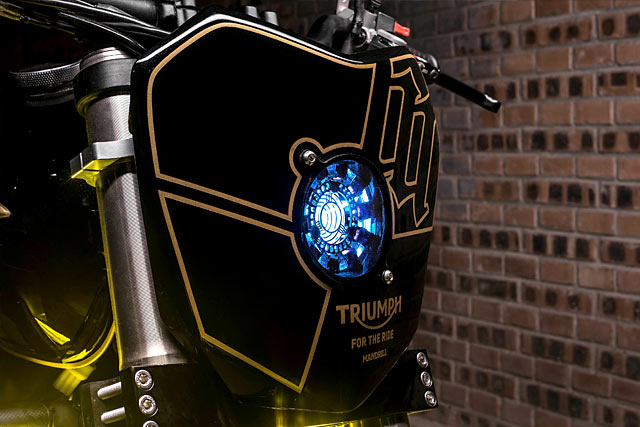 Knocking through the gears and making changes to the seat position for the rider a breeze are a set of fully adjustable rearsets that definitely add to the racer feel. While leaving no doubt about the inspiration is a set of Pirelli’s extra sticky Diablo SuperCorsa rubber. Now should Mandrill Garage wish to take Power Street across the ocean to tackle Pikes Peak they have a bike with all the fruit to have plenty of fun. But more likely this totally transformed Triumph will be found roaming the streets of Beijing late at night, looking for victims on which to prey and feasting on the unbelievers. 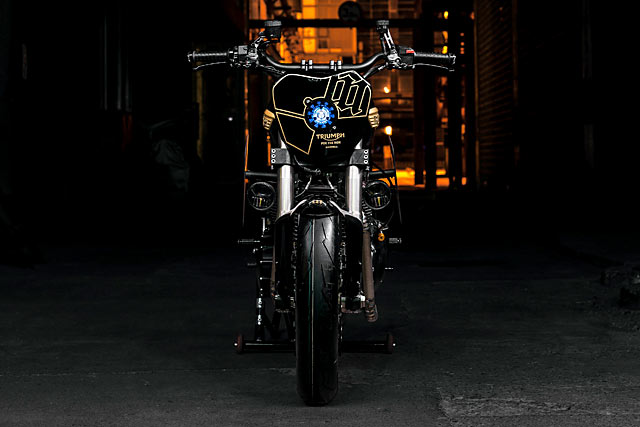