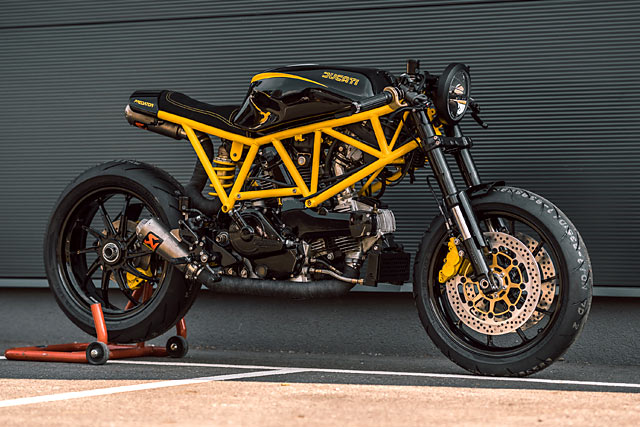 From Comedian John Cleese talking about the Monty Python writing process, to Axl Rose’s decade long attempt to make a single album, we’re often told that creativity takes time. But when you’re a custom motorcycle workshop without celebrity levels of cash to tide you over the job just has to get done. Seemingly with endless brilliant ideas running through his veins, David Widmann at Austria’s NCT Motorcycles has been turning out one hit after another. The teams latest is no exception, a beat up Ducati 750SS that’s now a svelte and stunning cafe racer. 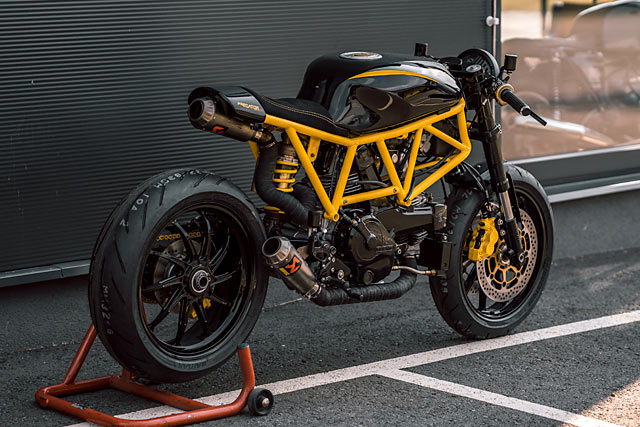 In the beautiful Eastern Alps of Austria, NCT Motorcycles are a small shop that has been producing an incredible number of amazing customs over recent years. Arguably one of Europe’s most prolific builder’s, David and his crew customise bikes of all sizes and styles and seem to be able to do it with an ease and efficiency that few others have mastered. This Ducati might have come into the shop in a sorry state but the NCT production line was in full swing and when it came its turn to go under the knife it was all hands on deck. 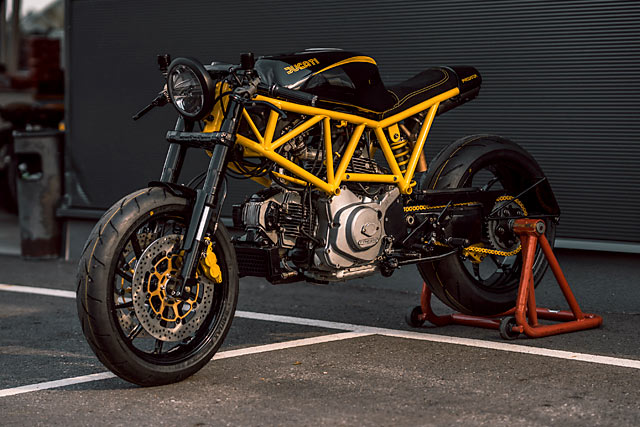 The ’90s Super Sport model was stripped of every last nut and bolt until just the signature Bologna trellis frame was left on bench. Having already come up with their plan of attack, the rear of the frame was cut back and simplified until just a single rail remained. With a special addition to the bike in the works, some new brackets were fabricated and welded on and extra bracing applied to increase overall strength and rigidity. Then it was out for powder coat where a hard-wearing layer of Ducati Yellow was applied. 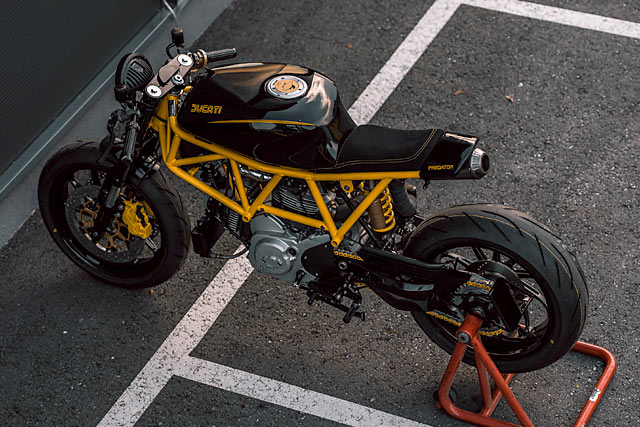 The rear end is where things get special with the factory box-section alloy swing arm being thrown aside. In its place goes a beautiful single sided unit from the similar vintage Ducati 748 middleweight superbike of the time. But it’s by no means a bolt on conversion, the fact the pivot runs through the rear of the engine casing was just one Ducati quirk that had to be overcome. But NCT has done a brilliant job, even managing to retain the progressive link that controls the Showa rear shock. 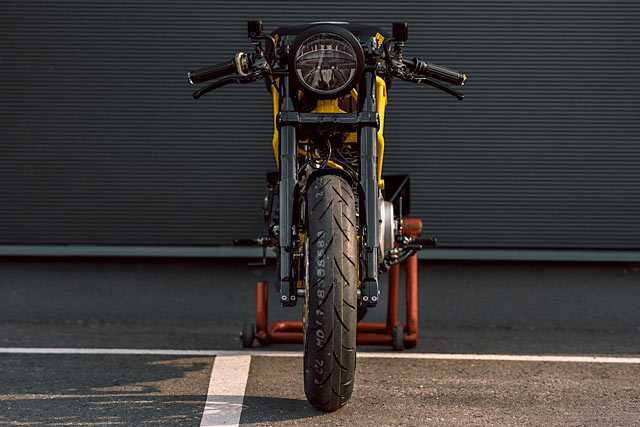 Keeping things tidy they’ve fabricated a small number plate holder that sits beside the rear wheel and the conversion also required a custom chain guard to keep the law happy. Just like the new rear end the factory USD forks have been powder coated black, with a rebuild ensuring both ends are working together to provide that sweet SS handling. The colour scheme had already been decided so while the black was being applied, the front Brembo calipers got their taste of eye-popping yellow and a new pair of drilled discs means she stops on the spot. 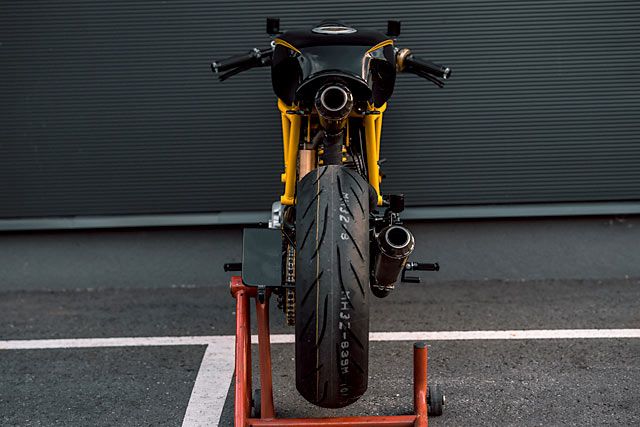 “Then it was into the paint booth to lay down the deep black with striking yellow making it really pop.”

Now it was over to the visual side of the equation and NCT have built a reputation on clean lines, flawless bodywork and perfect paint. To give the Super Sport a different look to the rest of the pack the familiar lines of the fuel tank have been changed ever so slightly with the tin work first pried open and the front end cut back and the rear being massaged. The tailpiece is flawless, simple and yet brilliantly made with the seat a mix of Alcantara and colour matched stitching. Then it was into the paint booth to lay down the deep black with striking yellow making it really pop, and retro logos that perfect finishing touch. 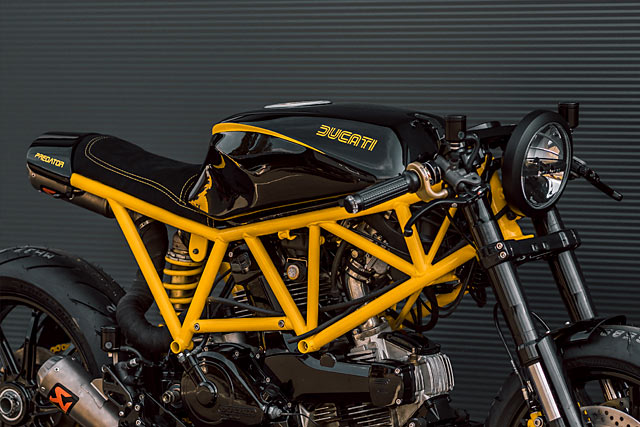 By modern standards the 748cc version of Ducati’s iconic air-cooled L-twin doesn’t make Panigale power, but they’ve got torque to burn and provide plenty of fun. Internally NCT opted to keep this one stock but its been given a thorough overhaul to make sure it runs like new. Next on the list was to dress it up, repainted belt covers and side cases give it a new lease on life. But its the hand-built exhaust that is the talking point; two individual pipes follow different paths but maintain equal length and finish out in GP style Akrapovic mufflers. 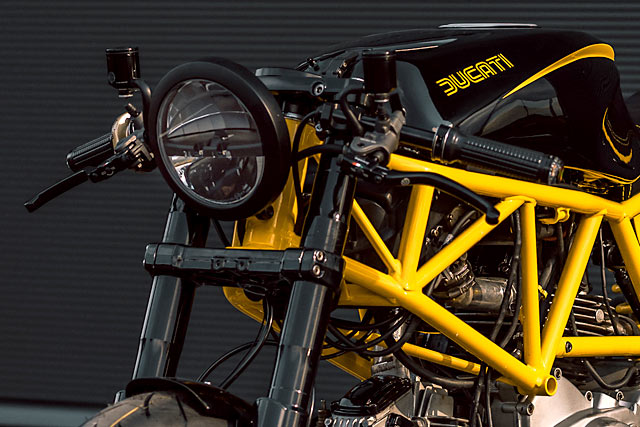 Electronics have come along way since the early ’90s and David was keen to take full advantage and bring the SS into 2018. “We have renewed the whole loom with a brand new m-Unit and a lithium battery that got hidden under the tank. The 750SS got a fresh Keyless Go function and an alarm system. The old handlebars got replaced by lower cafe racer items, which got a new m-Switch system and more high-quality Motogadget components in the way of the Speedometer.” While the modern take on the minimalist cafe racer look continues with the LED headlight. 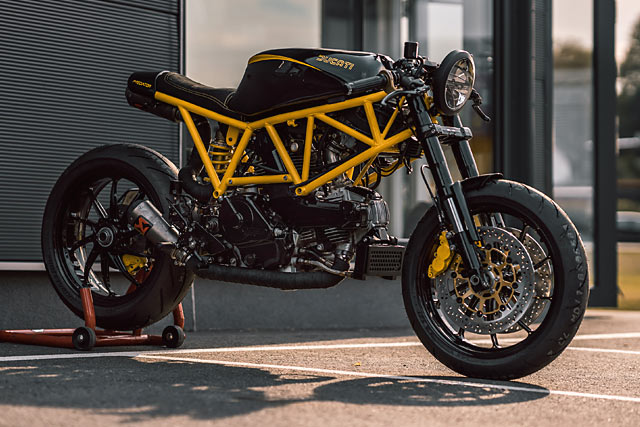 Taking some more parts from the Ducati catalogue meant a set of 1098 rearsets were selected and make for an aggressive riding position after plenty of milling and machining to get them to fit. Not wanting anything to disturb the colour scheme a new set of brake lines were ordered in black and then one special delivery arrived. A set of lightweight forged rims wrapped in sticky Bridgestone rubber complete the build and look super trick doing it. The NCT crew couldn’t be happier and their desire to deliver a genuinely sporty cafe racer with looks to burn ensure this hit factory has reached number one again! 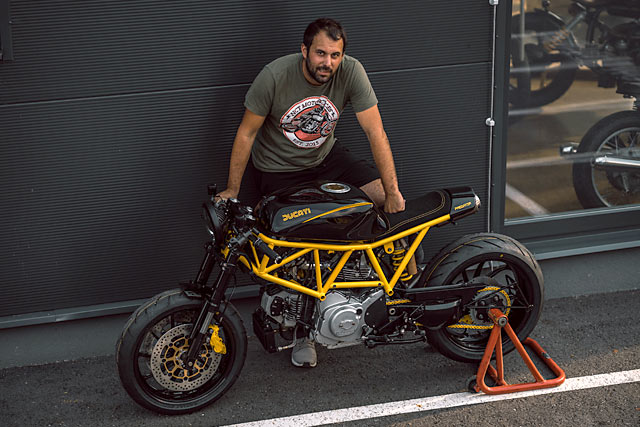