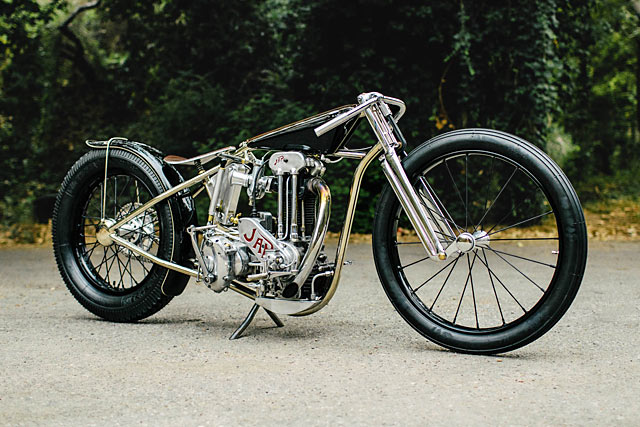 The truth is we’ve run out of superlatives to describe the motorcycle building genius that is LA’s Max Hazan. His creations are known the world over, museums count them among their most prized possessions and even the late great Anthony Bourdain spent time trying to understand what makes Max such a master of his craft. But in his latest work we get perhaps our greatest insight yet; from the vivid memories of a childhood Atlantic crossing comes the extraordinary Hazan Motorworks 1938 JAP 500. 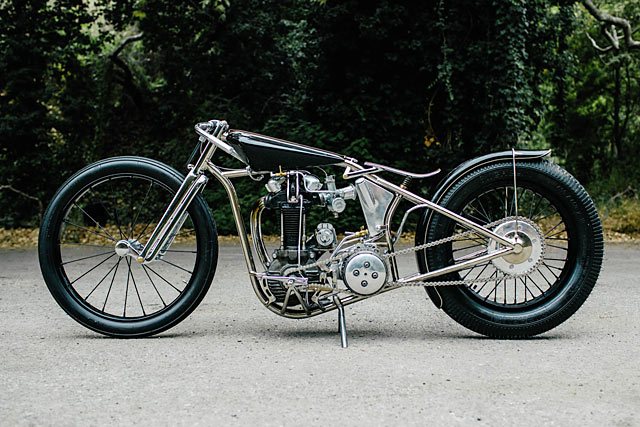 “I have been wanting to use a JAP engine for as long as I can remember. My parents went their separate ways when I was around three years old and I grew up splitting my time 50/50 between my Mother in England and my Father in New York. During the summers in Northern England, there was a local speedway track that we went to every Thursday night we could get a ride and although JAP wasn’t being raced anymore, I got my first whiff of methanol and castor oil,” Max remembers fondly. “There was a local speedway track that we went to every Thursday night…I got my first whiff of methanol and castor oil.”

Fast forward to 2018 and a client showed Max a picture of a 1940’s black race car he found in a book and said “I like the feel of this,” and left the project at that. Here, finally, was Max’s chance to create a build around the legendary JAP single cylinder engine. In the early half of the 20th century just about every British manufacturer had used one at some point and just as many were shipped overseas. Decades later and Max was on the hunt, “After a couple days of searching good old Southern California came through with a 1938 500cc race motor less than 40 minutes from my house.” 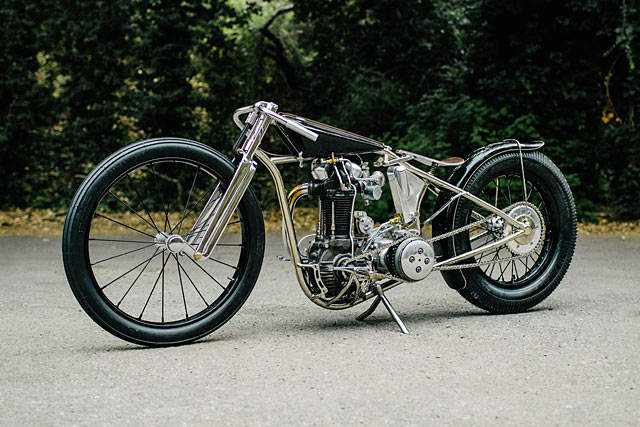 Back at his downtown LA workshop, Max began the design process in the way he always does: engine up on the bench, two wheels in place and then a rough sketch is commenced. In no more than an hour he had the layout down and the basic dimensions decided. his level of talent and the ease at which it comes is almost unfair. With alcohol slurping speedway bikes such a rich part of the JAP history, the decision was made to maintain the elegant simplicity they offer, with the engine as the centrepiece, but without just creating a race bike wannabe. 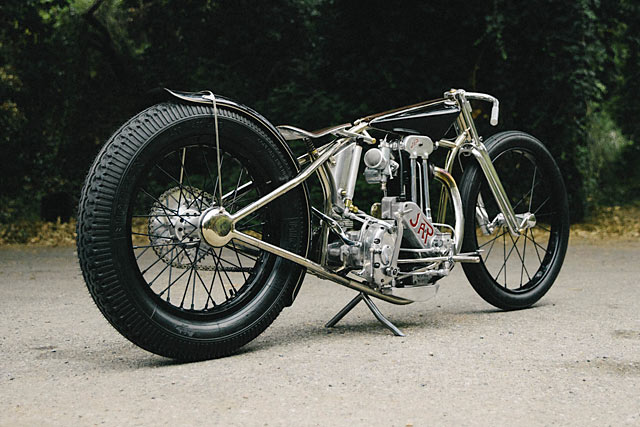 “The rear wheel is actually an MX wheel (KTM) with a modified hub and a clincher rim that I had to cut and re-weld to reduce the diameter from 24” to 23”. Apparently there was a shortage of 23″ clinchers so I had to get a little crafty. The front hub was just another random idea to clean things up too,” explains Max as nonchalantly as ever. The giant Firestone front tyre with chunky Michelin rear give an exaggerated Speedway appeal; a little tip of the cap to the engine without taking anything away from the overall design. The chassis itself is made from 0.125” 4130 Chromoly steel and as a standalone piece is a work of art in and of itself. 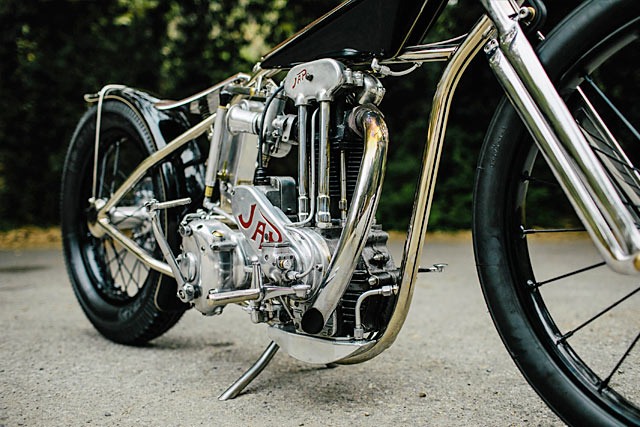 The front end is also predominantly solid Chromoly but as for how it’s sprung, I’ll leave that for Max to explain, “I have no idea where I got the idea for the front end but it uses a set of rubber straps as springs. I think I may have tested every rubber strap/band on the internet from all over the world but the perfect spring rate was actually found in a pair of $3.00 Husky tarp straps I came across at Home Depot after a month of searching. It works well and yes, there is a stop should there be any failure of the straps but with the length of the lever arms in the linkage; there is very little tension on the bands themselves.” 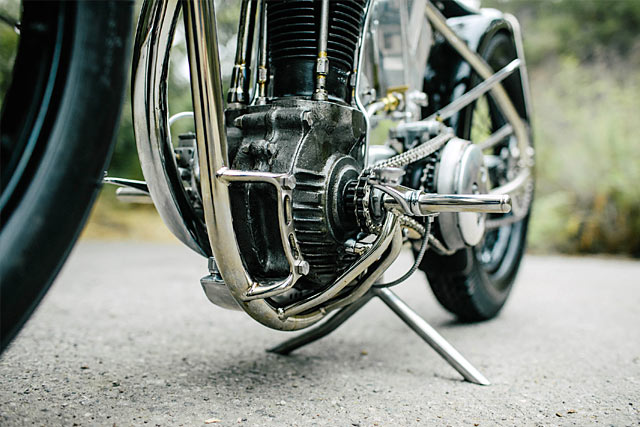 How’s that for a centre stand?

The centrepiece is of course the 497cc single cylinder JA Prestwich Industries engine, a mechanical masterpiece that Max displays in all its glory. Wanting to be able to keep the weight down and the lines clean, the fuel tank is just 1 gallon. This meant running it on alcohol was out of the question and as Max tells us, he wanted to be able to “fill it up at the pump.” Both the fuel tank and fender are made from a mix of 6061/5052 Aluminum. Their stunning lines and deep colour a combination of a nod to the classic British machines of old and Hazan’s signature brilliance. 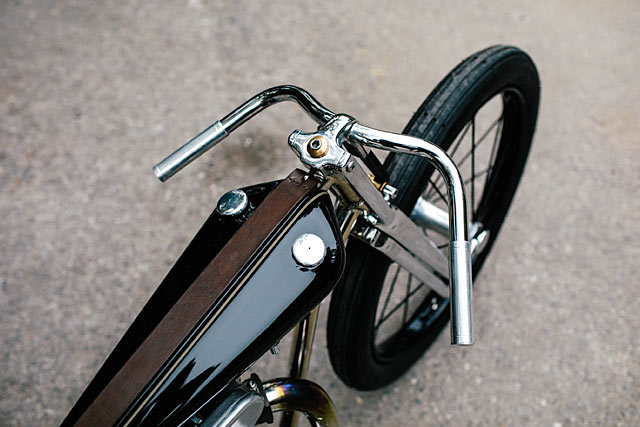 The lubrication is total loss on these vintage items and although Max experimented with a return system that he developed himself, he decided the relatively low oil consumption meant it was worth keeping things simple. There is an engaging appeal to hand pumping some more Castrol into the old girl from the stunning system that Max has handcrafted. “The transmission is a BSA A10 unit that I rotated 90 degrees, sealed and machined a carrier for a disc brake to be mounted on the countershaft behind the clutch. I tucked a Wildwood hydraulic caliper in there and the controls are hand shift, left-foot clutch, right-foot rear brake and an internal right-hand throttle.” Hazan explains. 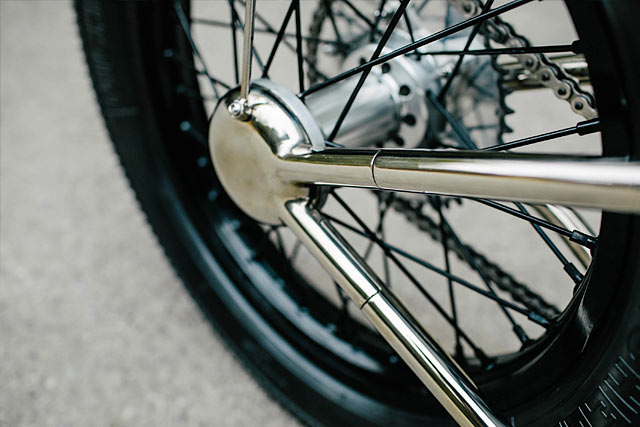 Any more minimal and it wouldn’t exist at all 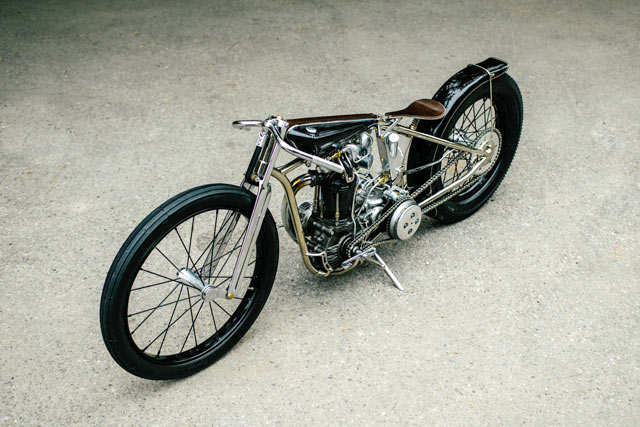 Adding to the old school charm is the full length leather strap down the tank and the matching piece on the seat, which is sprung to provide some rider relief from the hardtail. Everywhere you look is another example of Hazan’s mastery, it’s very easy to spend hours poring over every last incredible detail. Yet unlike most pieces of fine art, this vintage speedway powered, 203lb lightweight machine can take you on an adrenaline filled adventure like no other. “This is one of my all-time favourite bikes, to ride as well as to look at; once warm it’s a one kick bike and although ‘not quite’ street legal has a good amount of miles on it including riding in and winning The $25,000 Golden Bolt award this year here in LA.” A nice guy on a remarkable motorcycle, who just happens to be at the top of the game. Beautiful. 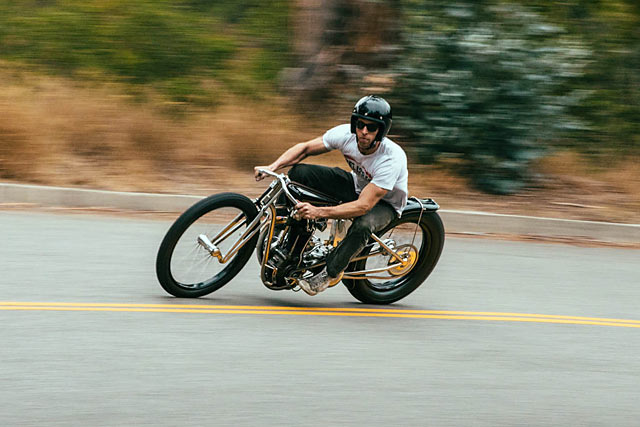