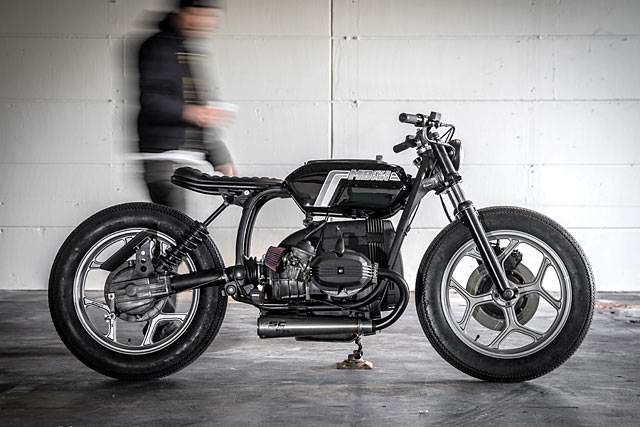 Think your relationship is pretty good? Chances are, you’ve got nothing on Heidelberg’s Martin and Melissa from MB Cycles. He builds rad bikes and she photographs them. He gives her a rad bike and she rides it. She likes it so much, she sends it to us to see what we think. And hey presto, Martin’s better half just got him a Pipeburn feature. Here’s their latest metallic offspring – a bouncing baby brat ‘87 BMW R80 with more than a few nice surprises. 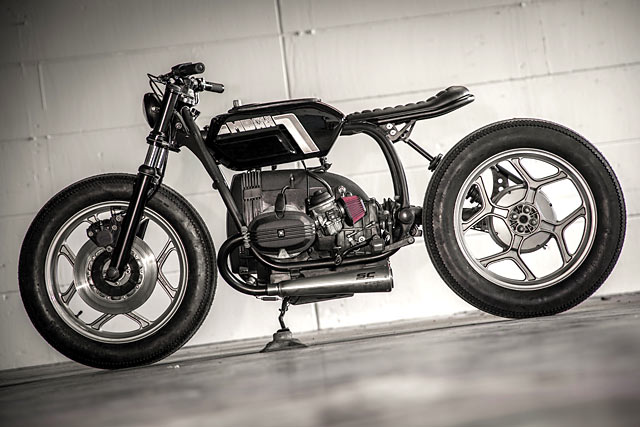 As a wunderkind, Martin thought it would be a good idea to steal his Mum’s bike and customise it by lengthening the front forks. At 13 he got his first moped. It was a gift and since he didn’t have the cash for petrol, he made it run with turpentine and whatever else he could find in the family garage. At 18 and with a new moto licence in his pocket, he dropped a bunch of cash on a fully customed Yamaha XT.

But in his 20s he somehow drifted away from two wheels and left his hometown of Miltenberg to move to Heidelberg. Living ‘hippie rough’ in an old bus, he worked at the Christmas markets every year for a couple of weeks to earn enough money for trips to Burma, Nepal, Thailand and India. During his travels in India, he constantly bumped into all sorts of cool customised Royal Enfields and became a little nostalgic for his two-wheeled teens. 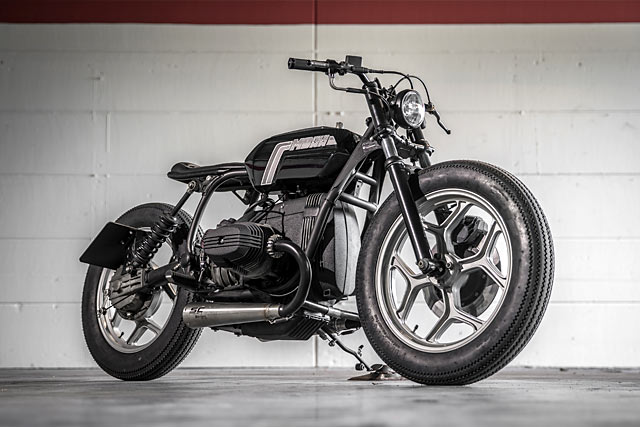 Then on his last trip to India (or more specifically, Rajasthan) he bought two Royal Enfields, rebuilt them with the help of some locals and exported them back to Germany where the Department of Employment was very interested as to how an unemployed biker was able to afford to be a motorcycle importer while also receiving government assistance. ‘Why yes Mr Government Bureaucrat, maybe registering my own import moto business would be a good idea’… 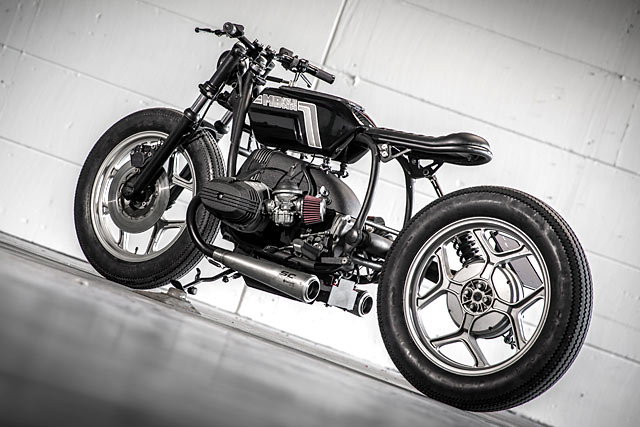 “It’s a small racer, meant for fun,” says Mel. “We bought it as a complete piece of garbage (except for the motor) from Martin’s friend at the local moto repair shop. It was abandoned somewhere in his huge garage; there was even hay sticking out of it. I was the inspiration, I guess. I wanted something small, light and easy to handle. Something to run errands or just visit the lake in the summer. Normally I ride a custom HD Sportster and since I am a wimp, it’s already quite heavy in certain situations.” 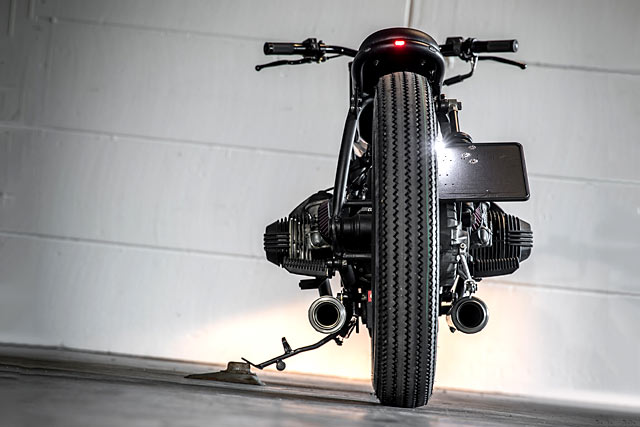 Originally it was a BMW R80 monolever from 1987, but not for long. Soon after it was rescued, the bike was totally ripped apart, including the frame, both wheels, forks and triple trees. Basically, everything was cactus and had to be replaced – something that neither Martin or Mel knew beforehand. “I started to build the rolling chassis,” says Marty, chiming in. “I shortened the front fork and cleaned it, then I tossed the original rear frame and replaced it with a handmade update which included the brake light and turn signals.” 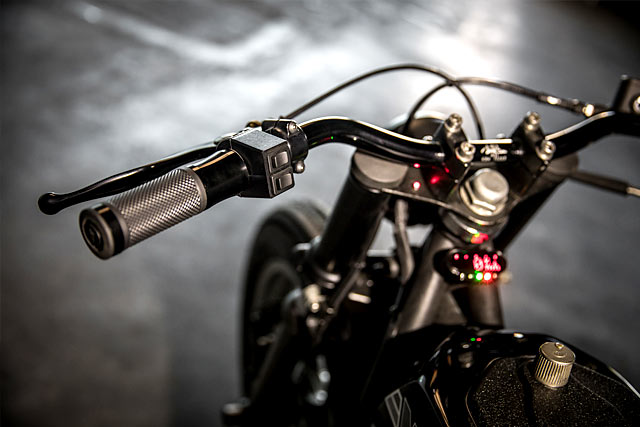 “It wasn’t easy to find a cool gas tank because nothing really fits on the BMW frame and of course I didn’t even think of using the original BMW item – it’s way too huge! Then at a swap meet I found this old KTM tank which of course didn’t fit on the frame at all, but I only used it as a shell and totally rebuilt the underside of it. The cool thing about the KTM tank is it has a small compartment to store things in.” Like all his bikes, this one definitely ticks the ‘less is more’ box. Everything that was not needed was removed or minimised – including the electrics that were hidden under the gas tank and inside the motor‘s covers. “Of course, it was damn hard to be so minimal and to hide things at the same time.”

“Then at a swap meet I found this old KTM tank…it has a small compartment to store things in.” 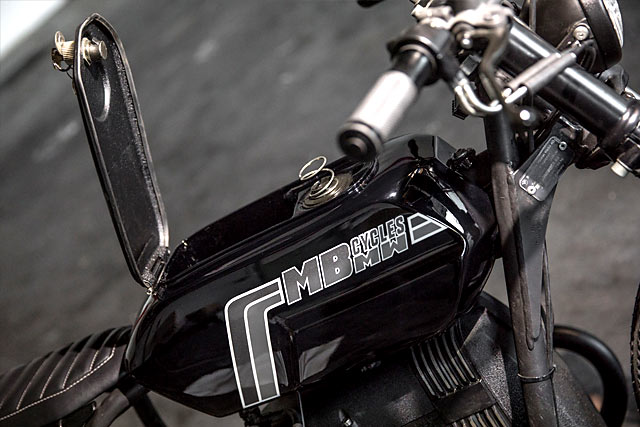 Marty also hid the new battery under the transmission; its case and the mufflers were prototypes from his buddy Markus Walz from Walzwerk Racing. The headers he made himself. “The most annoying aspect of the build was continuously finding new things that were broken and needed to be replaced,” he bemoans. Sounds a lot like an old girlfriend of mine. 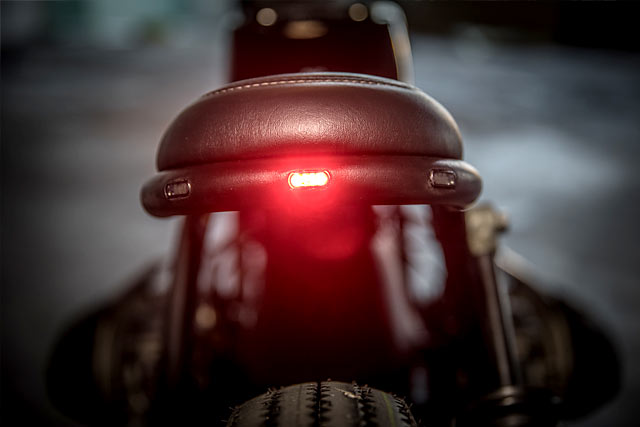 “What I like best about this bike is that it has a very racy look matched with a very sparse feel. It also feels like riding a very fast bicycle because of its new weight. Normally I focus on v-twin motors – mainly Harleys – but this was a favor for my girl.” And what a favour it was! 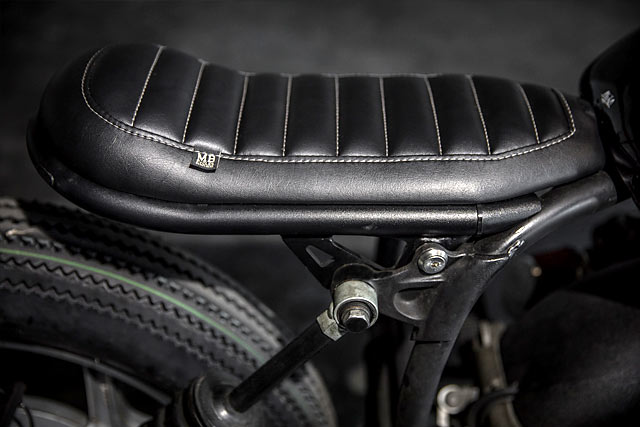