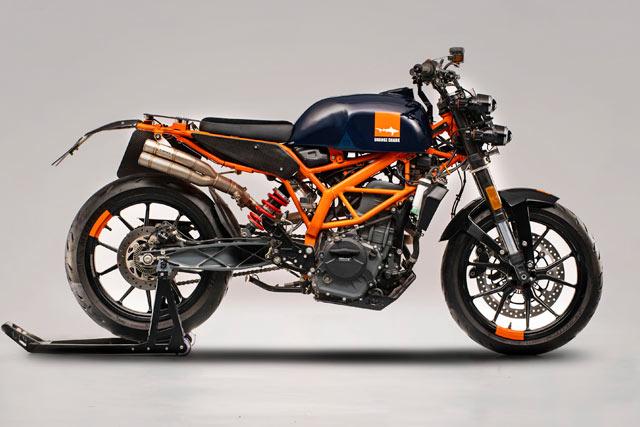 It’s taken a lot longer than we’d like, but there’s some cool custom bikes coming out of China. And with more money being thrown around in Beijing than at a bikie strip show there will be more. The custom bike scene will be huge there some day. And in the years to come the Beijing custom scene will look back at shops like Mandrill Garage and builds like their 2016 KTM Duke 390 dubbed the ‘Orange Shark’ as the bikes that broke new ground. 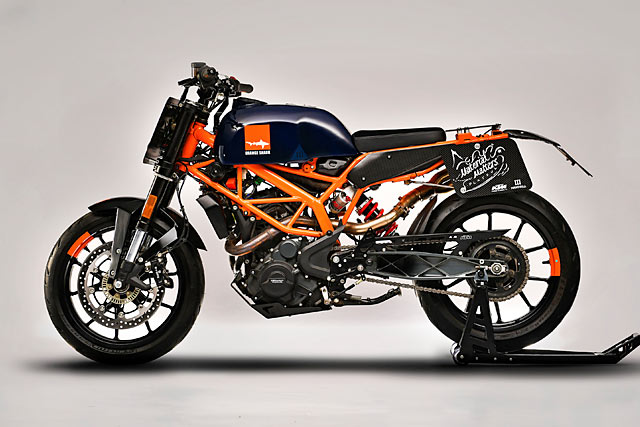 With rapid urbanisation there’s always a risk that China will skip a love of motorcycles and go straight for cars. But I’m we think that we’ll see more bikes like this. I love the little Duke 390 customs that have started to kick about. They’re lightweight, reliable and a shitload of fun to ride in stock trim – so why not use it as a base for a custom?

“With rapid urbanisation there’s always a risk that China will skip a love of motorcycles and go straight for cars.” 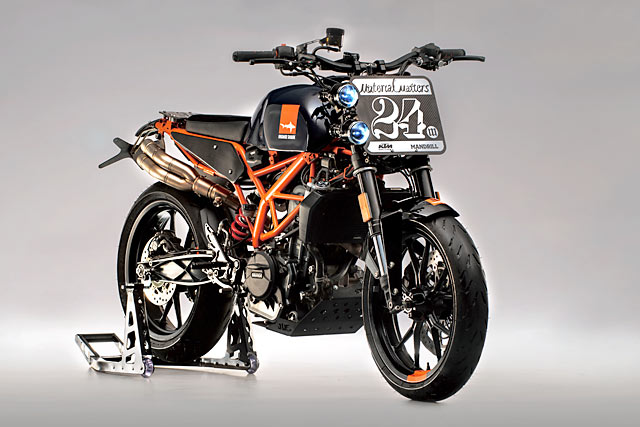 And that’s exactly what Mandrill’s client was thinking when she dropped the bike into their Beijing garage. “The KTM is a really good choice for a new rider and especially a female rider,” Mandrill’s Luo Hao states, “But everybody wants their bike to be individual. And anyway, the standard bike is too plastic”. 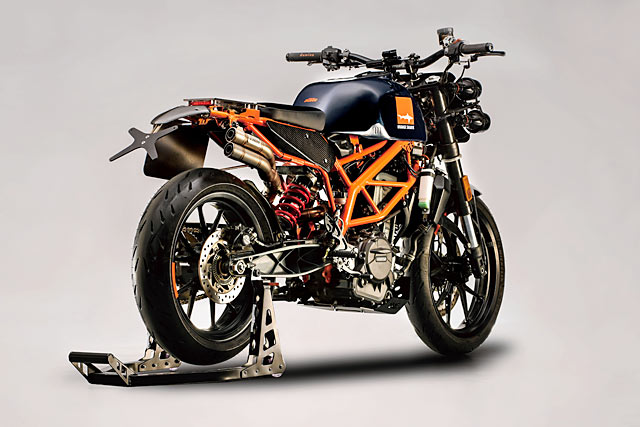 So the first thing Hao did was to remove all the plastic gunk. But he aimed to keep all the replacements lightweight. Because the owner wasn’t just going to be dodging cars, scooters and oblivious pedestrians on Beijing roads. “She is planning on taking it to the track,” Luo states, “so I wanted to make the bike… racier”. 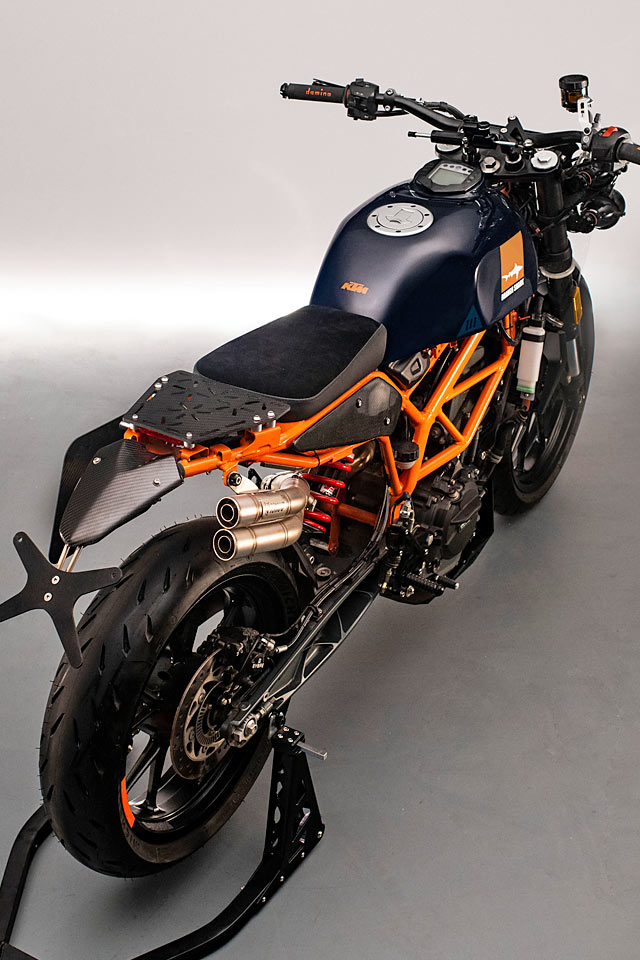 With that in mind Luo built a one-off aluminum fuel tank. To get the sizing just right he cut some foam in a dummy run, making sure it’d sit correctly and look proportionate before fabbing a complete tank up himself. It’s a damn good job – especially with the bulky plastic dashboard recessed neatly inside. 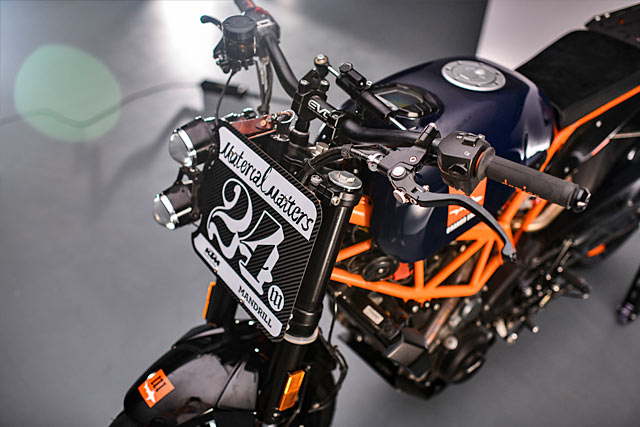 That was the hardest part for Luo to do. “Putting the dash on the tank took up a lot of space,” he says. “The original fuel pump is also really big – so it was quite difficult. In time I’m going to look for an aftermarket pump”. Hell, it looks just fine to me. But every inch of room for guzzoline helps when you’re using the bike as a daily commuter. 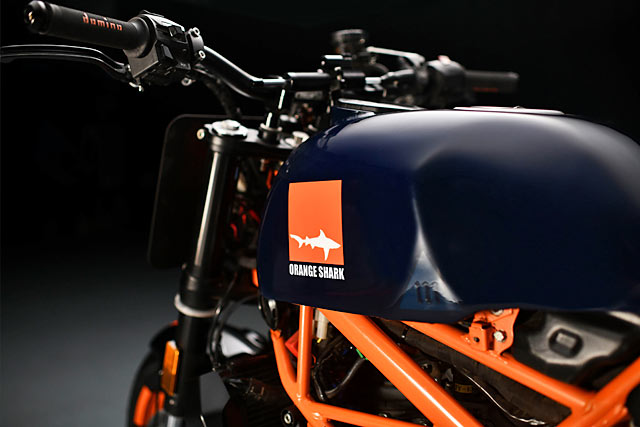 But does it come in any other flavours?

At the back end, Luo cut and altered the subframe, lowering the angle to make it look a little more traditional. At the same time he made sure the new thinner and slimmer seat wouldn’t stick out. The frame was re-powdercoated in KTM orange and the work he’s done matches the standard trellis frame perfectly. Neat job, that. 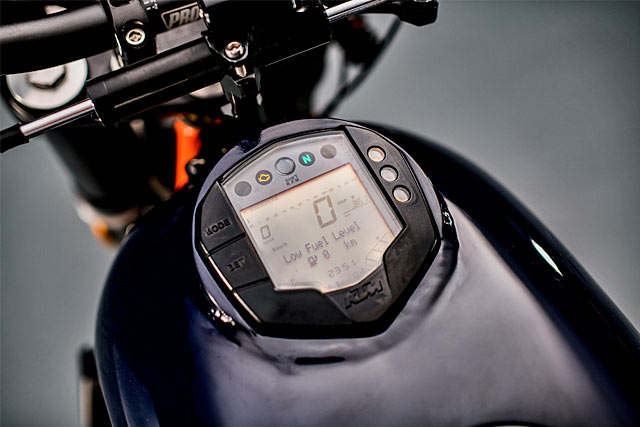 Rounding out the list of modifications is a custom-built carbon fibre number plate with LED lighting. It’s got a YSS rear shock, Brembo RCS master cylinder, beefier 320mm disc and a custom exhaust system. I don’t have the weight measurements for the mods and, honestly, with the standard bike sporting so much plastic it’s probably not all that different. But it’s a huge visual leap from the standard bike. 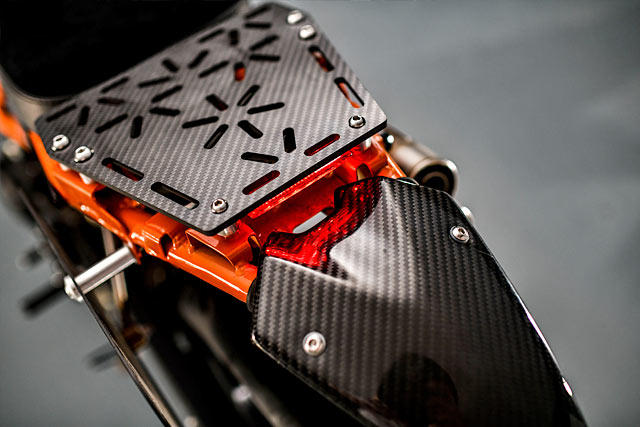 And for Luo it’s all been in a day’s work. “For me it’s not a big project,” he says, “Every part looks quite easy. But I love the feeling of this bike. A little racey, it can be used every day but still completely different from a standard KTM 390. It feels great to ride”. And with the standard KTM being a bucket of giggles, we can’t help but think this would be an absolute hoot.