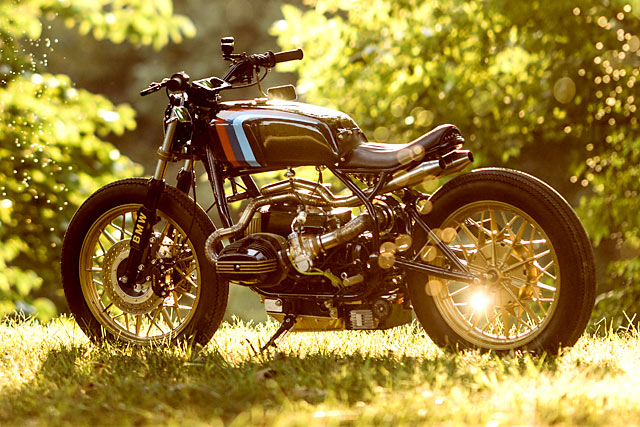 Making a splash in a small American town isn’t hard. Some fancy new clothes. A fresh haircut. The fact you’re holding hands with someone new. It all gets noticed. But for One-Up’s Taylor Henschell, the thing he tends to get noticed for is the fact that he can been seen roaring up and down the main street on an amazing new custom bike every few months or so. Better yet, it’s not even a Harley! So, what’s the latest two-wheeled sensation that has everyone talking? It’s this, his custom ‘82 BMW R65 RS. 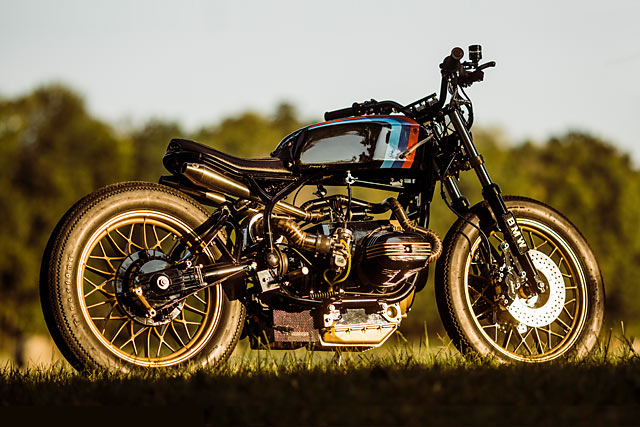 Since his last build was delivered a few months ago, Taylor says that this BMW has pretty much consumed his life – and that’s only the start of what’s shaping up to be a pretty nutso winter. “I’m about to be juggling two new builds while I also uproot my shop from one small town in Arkansas to another. So the next few months will definitely test me.” He’s excited though, as he’s been nurturing a pretty hectic case of Gear Acquisition Syndrome by stocking up on new equipment to make his job easier and give him a few more avenues to express his creativity. 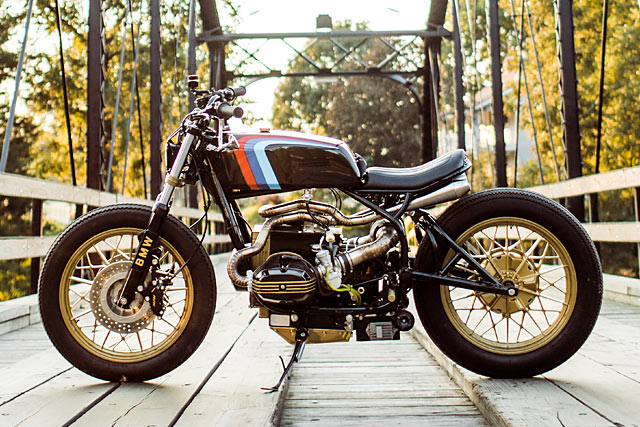 “What style of motorbike is it?” we asked him. “It’s my style, hopefully! I always have trouble answering this one. One show I entered it in called it a bobber, but that felt wrong. Until there is a “One-Up” style, I’ll just say its open to interpretation.” 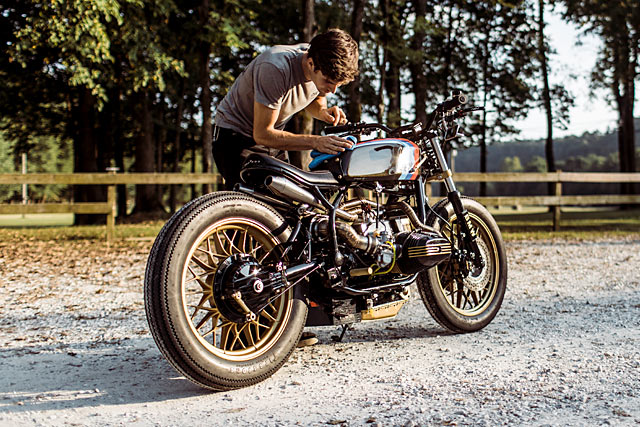 But the specifics on the bike are a little less mysterious. The customer rode a pretty well looked after 1982 BMW R65/7 RS through his workshop doors, and it was game on. No classified hunts. No old barn searches. Hell, he didn’t even have to haggle with the previous owner. Some builders have all the luck, don’t they? 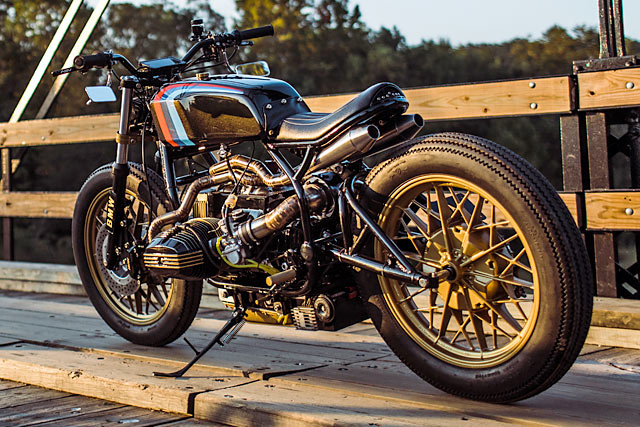 “The client had a lot of features in mind for this bike,” says Mister Henschell. “The fuel gauge had to be on the right side, some hidden storage under the tank for his papers, a relatively low seat, ’bars at a relaxed height and a comfortable seat.” Then there was a decent headlight, a Motogadget m.unit blue, a One-Up-style stainless exhaust with the twin under-tail mufflers, and a splash of BMW Motorrad heritage. “I was down for whatever he wanted – I was just happy to get my hands dirty on a classic Euro bike.” 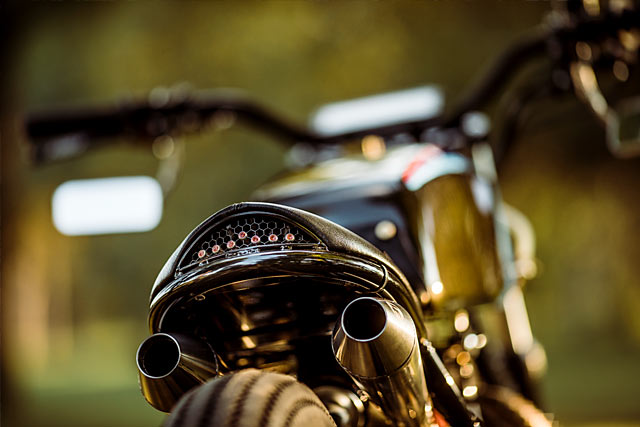 “The bike came to me with only 14,000 miles on it and in fairly good nick to be honest,” says Taylor. No hard feelings please, purists. “I started with a strip down, leaving only the engine and down tubes of the main frame cradle. The first modification was recreating the frame with a similar design to stock, but with a two-inch drop from the backbone tube to the swingarm pivots. This created a cosmetically invisible drop in the seat height without sacrificing geometry, or ground clearance.” From there he modified and fitted an old Yamaha Tank to it and built a bespoke subframe. Then came the integrated frame lighting and a redesigned swingarm to hold a newer sportsbike Hagon monoshock, sourced from a CB600F. 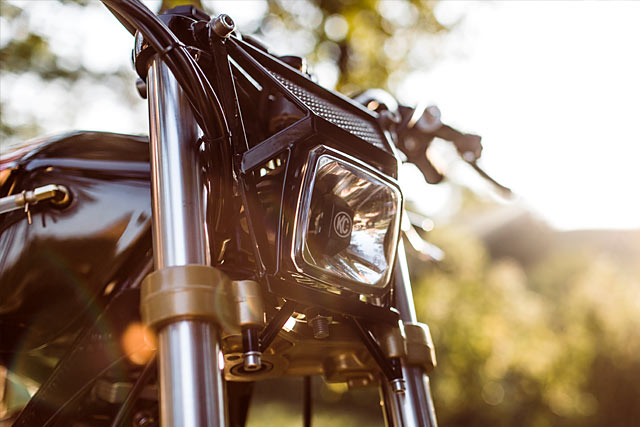 The front end was kept, fully rebuilt and left with about four inches of travel. “But I did retrofit it with dual disc brakes and some Ninja 650 4-piston calipers.” The next job on the Sharpie cardboard list was the engine. “First, it was fully disassembled for paint and powder. It also got the Euro Moto Electric ‘Permanent Magnetic Alternator’ swap and a digital ignition system, as well as their new (and more efficient) starter unit.” After replacing the seals and gaskets, he reassembled it with all-new clutch components and freshly lapped valves. “I wanted to showcase the engine mods, so I created my own top and front engine covers that wouldn’t fit with the stock equipment – and since the digital ignition is optical, I had to keep it covered.” 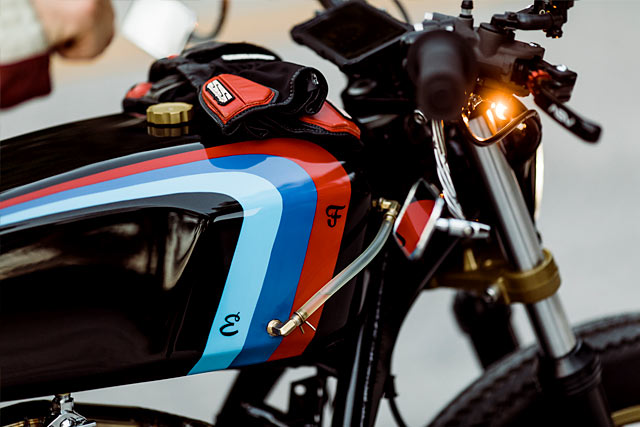 Almost time to fill up

The engine was rebuilt specifically for reliability. “I also fitted it with a set of VM Mikuni carbs, because I’m getting to know them very well for tuning purposes. But the plan is to make it an 860cc, the benefit of that being a shorter stroke, smoother and higher revving bike that would out perform a stock R80. Visually, I think that the intake is a focal point of this build. I wanted to create something unique with a visually continuous loop from one exhaust tip to the other.”

Taylor also did his own paint. Starting with his black base, local Artist Eric Snodgrass hand painted the Motorrad colors and the “E” “F” for the fuel gauge before Taylor mummified it in clear with a touch of gold pearl. Look closely and you’ll see the handmade battery box underneath, hiding the Motogadget m.unit Blue. It in turn communicates with the m.blaze signals and the m.switch in the bars, along with the tunable ignition programmer, all powered by Shorai’s largest available motorcycle battery. “A year ago, I had never even sat on an airhead. Now I know the good, the bad and the ugly about BMW’s R series”

“Making the exhaust and intake work together was a real challenge, but overall this build was actually pretty good to me. I didn’t find myself beating my head against too many walls. The most time-consuming part was researching the engine. A year ago when this project was first requested, I had never even sat on an airhead. Now, just over 120 days later I know the good, the bad and the ugly about BMW’s R series and how to bring one up to speed.” 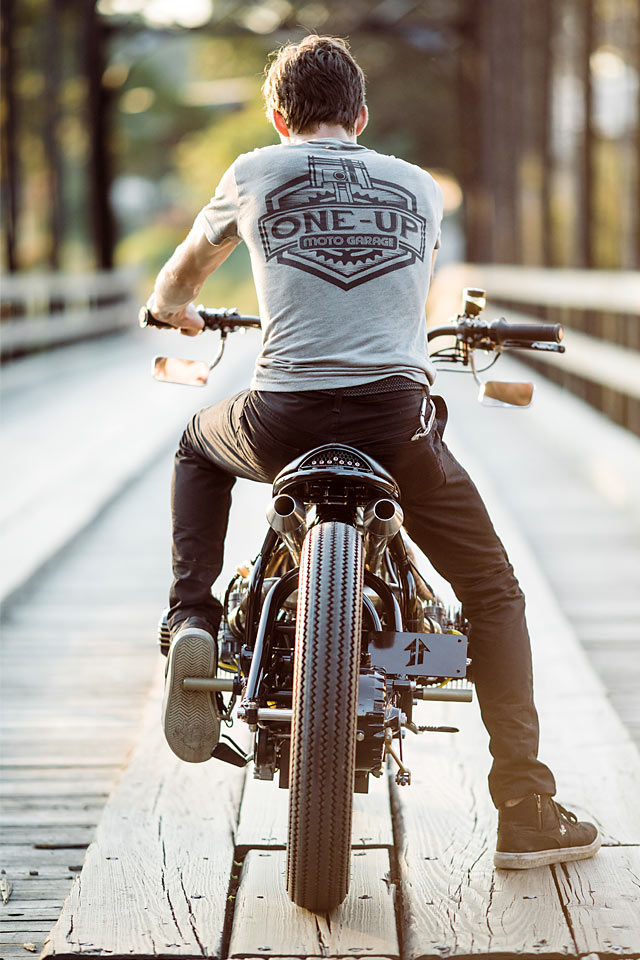 Over the bridge, downtown

In closing, Taylor notes that he always gets nervous at the end of a build, especially when it is time to take the maiden voyage. “There is a year’s worth of time and energy in this piece of metal I’m straddling and all the theories and ideas become reality on that first ride. This bike fired up within 3 engine revolutions on the first attempt and the throttle cracked like a whip before I even got to fine tune it. I was very pleased rolling around my little Arkansas streets, feeling the dry clutch break in, smelling the exhaust when I turned to look behind me, and feeling the suspension eat the road with finesse.”