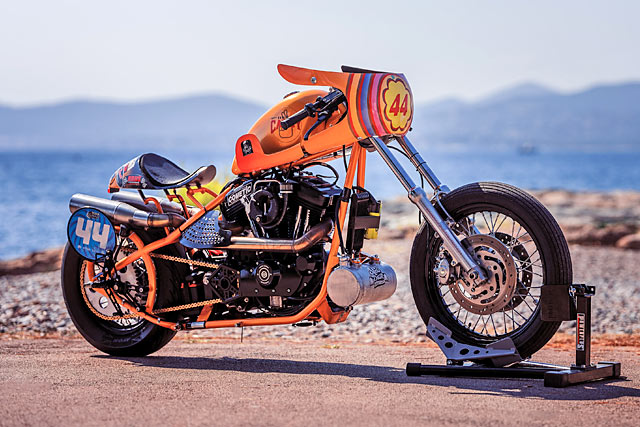 They say too much sugar makes you do silly things. Running around like an idiot. Uncontrollable giggling. Boundless energy. Which, strangely enough, are pretty much the same symptoms one exhibits after a serious run on a fully worked sprint racer. Introducing Moto Candy’s Sportster-powered ‘Lolly Pop’, a perfect storm of sugar-powered craziness, comin’ at you straight out of Switzerland, home of the world’s best sweet stuff. Let the silliness begin. 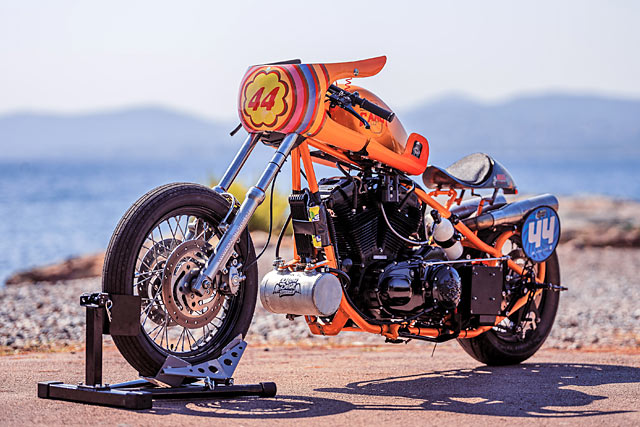 Started out of pure passion last April, Moto Candy’s David Maric has pretty much created his dream motorcycle dealership in the suburbs of Zürich, Switzerland. It is the official dealer for Norton, Fantic and TM Racing in the region as well as a self evidently epic custom shop. “For clothing and accessories I went the long way and found myself brands that were yet to enter the Swiss market, including Original Driver, Bolidster and Sideburn.” David notes that the shop is within a Lotus car garage called Schaffner Racing, which adds a nice mix of both two and four wheels to the proceedings. 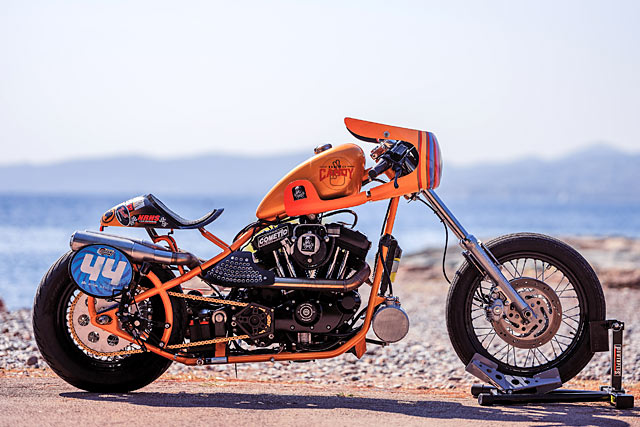 The bike was built around a custom frame from fellow countrymen, CCCP Motorcycles. Apparently they are Switzerland’s only moto frame maker, and from what we’ve seen they really know their scheisse. With everything from nutso choppers to Buell track bikes in their back catalogue, this 2008 hardtail frame would seem to be a perfect choice for David’s sublime-meets-ridiculous racer. And it’s all thrown down the road by a 1200 Harley Sportster engine. 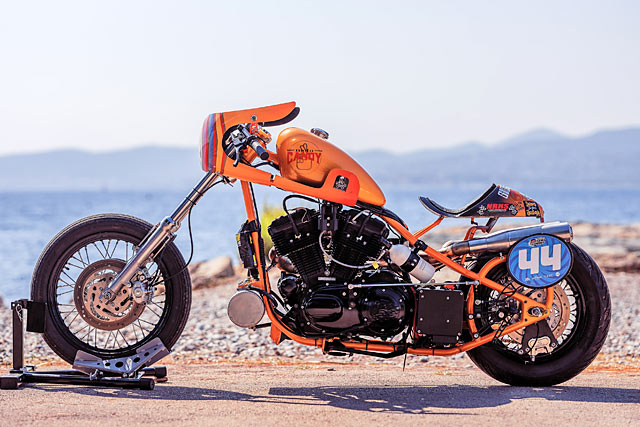 “While still torturing the keyboard in my old office job, I was already heavily infected with the two-wheeled bug. As you do when you work 9-to-5, I was looking for a hardtail bike with swiss registration in the classifieds during work hours. As I prefer to ride than to fix, I was looking for something fairly new. Finally I found a rolling chassis for a 1200 Sportster engine online and I bit the bullet.” Having already made several pilgrimages to the NitrOlympX and England’s Santa Pod, Dave fell in love with the aesthetics of drag bikes. The low seats, rearer-than-rear foot pegs, clip ons and the stretched riding position. “This is what I wanted! But as a type of hardtail with this forward-leaning, aggressive, drag race pedigree style. Of course the colour had to match the bike’s character, so I chose the orange you see here. A flashy style, but without the nasty ‘bling bling’ and glimmer.” 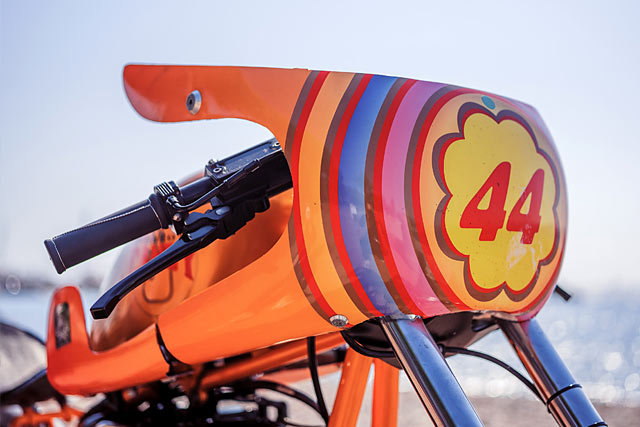 The original frame had super forward footpegs, a low seat attached directly onto the frame and some wide bars. Of course, this all had to go. “The rear struts – typical for the Sportster – were cut down and the footpegs moved from up front all the way to the rear axle. The mounts for the gas tank were moved up one tube in the frame, so it’s actually half way up. The seat is a one-off hand-shaped metal piece mounted on struts and the clip-ons are aftermarket parts off the shelf.” The wiring all had to be re-routed and secreted away in order to keep the overall look of the bike clean. The ECU, fuses and all the electrical connections went into the small black box on the bike‘s lower right hand side. 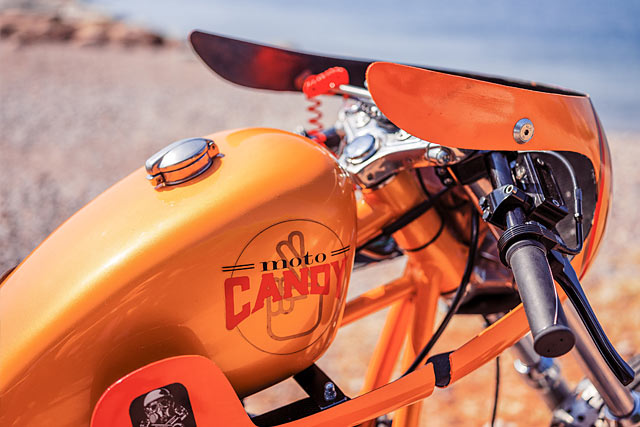 “In order to keep the look in a drag-style, there was only one way the pipes could be finished off; moving them underneath the seat and to the rear end of the bike. They are handmade and the mufflers including the cat converters are aftermarket pieces.” Remember, the bike is actually street registered but thankfully for Zurich‘s diabetics, it’s presently only used for racing. Once the basic setup was put in place, the frame went for powder and afterwards the other parts were painted accordingly.” For the first two years the bike was used on the road, but with it being really far away from a comfortable ride and with a crazy ‘Sultans of Sprint’-shaped idea floating around in Dave’s head, it remains a pure race bike for the time being. “But who knows, maybe one day she will be back on the streets again,” says David, with a weird glint in his eyes.

“Remember, the bike is actually street registered but thankfully for Zurich’s diabetics, it’s presently only used for racing.” 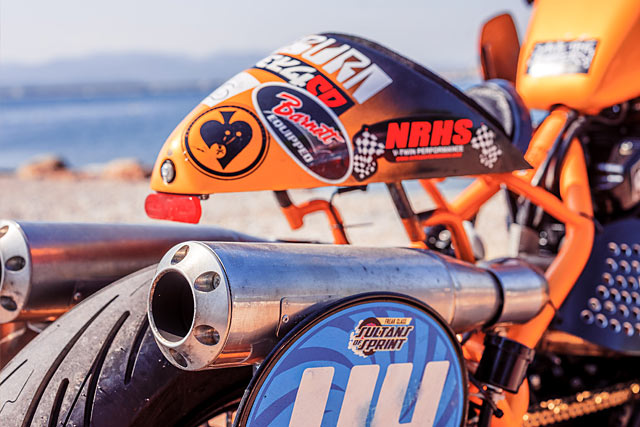 Dave says that the easy part of the build was to tune the engine to create more power; the difficult part was to stop the bike from self-destructing thanks to all that Harley-Davidson Vibration™. “The first part to die was the oil tank; along the way we kept losing screws, which stopped us from racing at the St. Raphael round. Also, aluminium parts keep breaking, there was a massive oil over pressure problem as (unsurprisingly) the Sportster engines are not designed for racing. This also caused some delays during Glemseck 101.” But with winter fast approaching in the Northern hemisphere, the time is now right to strengthen the key parts, secure every possible screw and at the same time to make it lighter. “The aim is to slim it down by a good 20 kilos in order to be more competitive next year at Sultans. For a first time race team, this turned out to be our biggest challenge.” 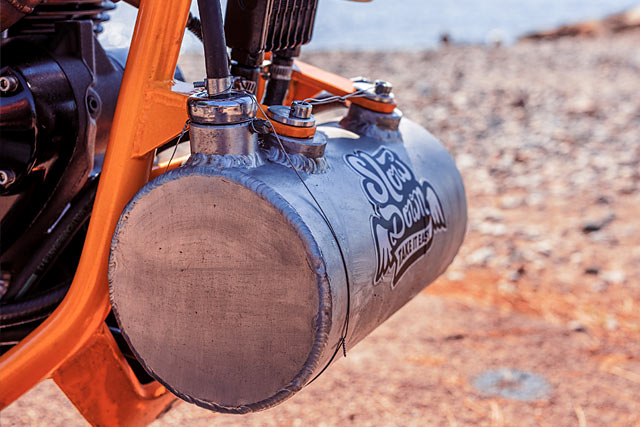 Dave’s favourite part of the bike? “Well, look at it! It’s fucking awesome!” Fair call. “At every event we go people stop and check it out and they seem to like it a lot, so this is a pure emotion that you just can’t buy. We get a lot of smiles and positive reactions with something the team has designed and built ourselves. The bike is a mirror of our personalities and as you can see, we like to have fun.” 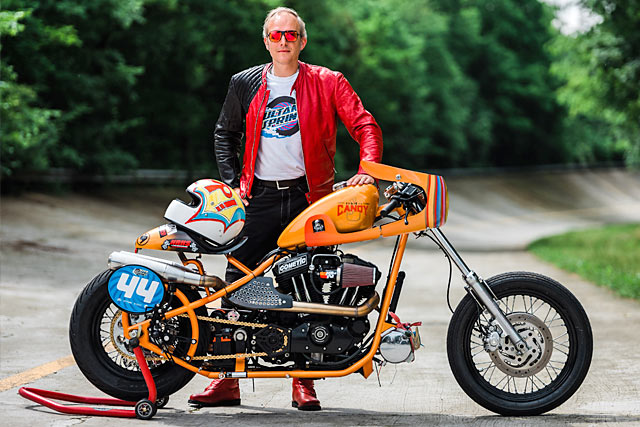