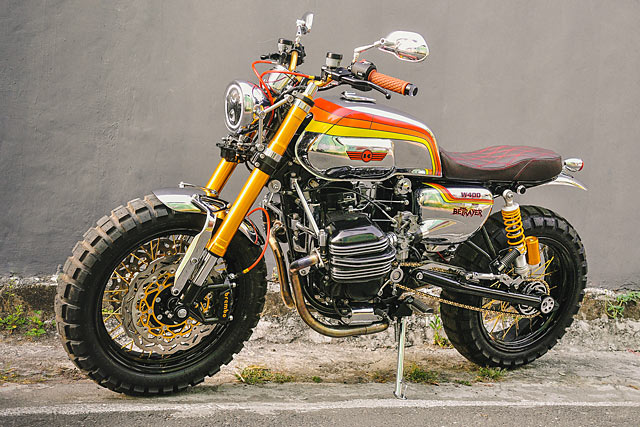 After almost ten years of blogging about custom bikes, we’re pretty confident we could count the instances of builders who have made their own engines on one hand; even a hand that’d taken a trip through a rear chain and sprocket. Put simply, it almost never happens. And why would it? The engineering required to do something like that is only in reach for the manufacturers themselves. Or is it? Well, for Indonesia’s Pap N Mam Modified, making their own engine was such a non-event they barely mentioned it in their interview. Yet here we sit looking at a bespoke Kawasaki Boxer engine made from two separate 175cc singles. 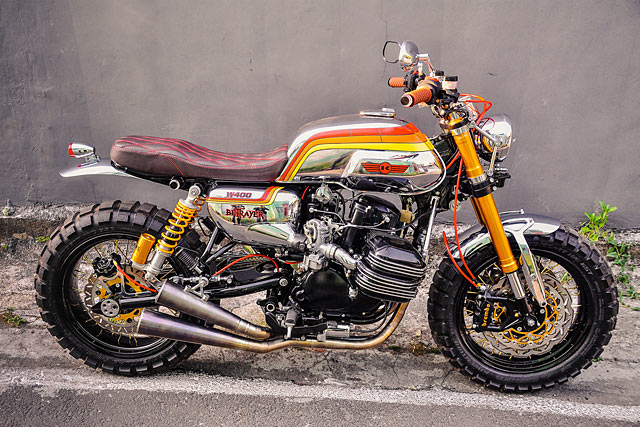 Hailing from Semarang in Central Java, they’ve been on our radar since we’ve been attending Indonesia’s massive Kustomfest show. During our 2018 trip, we loved this particular bike so much, we named it our Best in Show. Clearly a shop that has its eye on national and international custom trends, they tell us that they made a conscious decision to stand out from the crowd with their next few builds. “Now, we always want to be different,” says Hendra, from the shop’s crew. “Actually, we are currently working on 8 bikes in our workshop, 1 of which will be finished next year; it should be really special.” 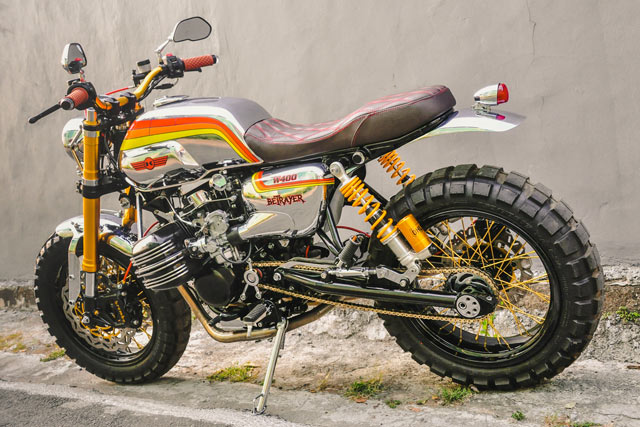 But back to the bike at hand. “It’s a Kawasaki Boxer we call the ‘W400 Betrayer’. It’s two W175 Kawasaki engines joined together in the one W175 frame. As for the style, we have been calling it a ‘Scrambler Tracker’ because we feel we’ve combined two different styles into the one bike.” Two engines in one and two different genres as well? It’s beginning to seem like the Pan N Mam boys are a little obsessed with the idea of pairs. 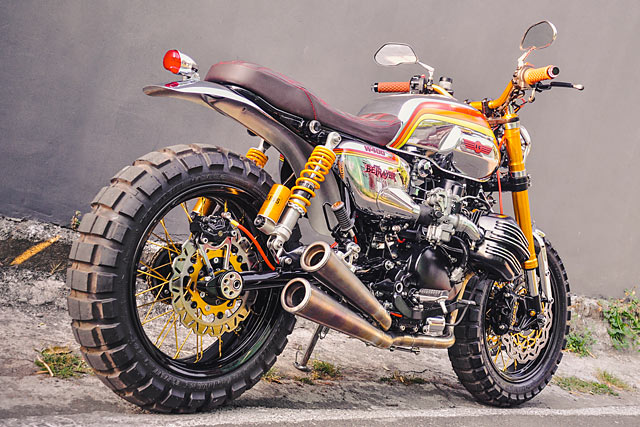 With the donor bike only released to the market right about now, there’s little surprise as to where the shop sourced the donor bike from. “We bought it at our local Kawasaki dealership as a new motorbike.” We’re guessing that they didn’t blow the sales staff’s minds by trying to explain what they had in store for it. “After the bike arrived at our workshop, we immediately dismantled it and got to work.” 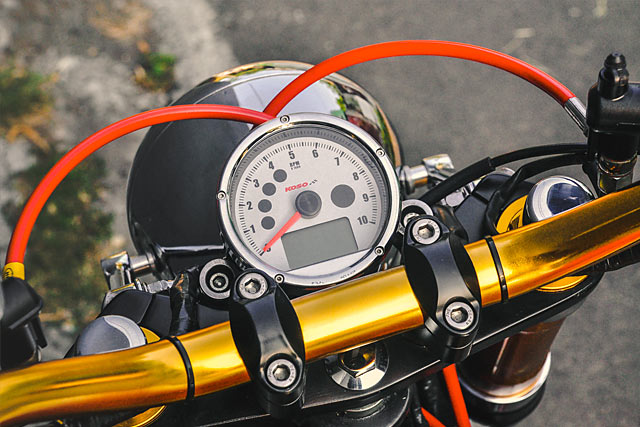 “Sometimes, the big changes in the world come from people who want to work hard and aren’t afraid to look or think different.”

As you may have guessed, you don’t set out to build a chrome, orange and yellow boxer Kawasaki and expect to fly under the radar at the same time. “We wanted to be different with this build. Sometimes, the big changes in the world come from people who want to work hard and aren’t afraid to look or think different.” 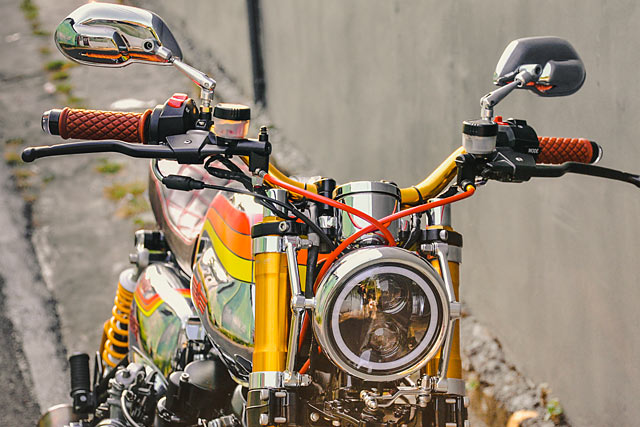 They’ll be the first to tell you that the build process was quite a long and tiring one. “This is because most of the parts are shop-made, not factory parts. Starting from the boxer engine, the side covers, the gas tank, the swing arm, front forks, the frame – pretty much everything was done manually without a CNC machine or a hydraulic press. That’s what makes us really satisfied, because this is a work of art that is made by human hands.” 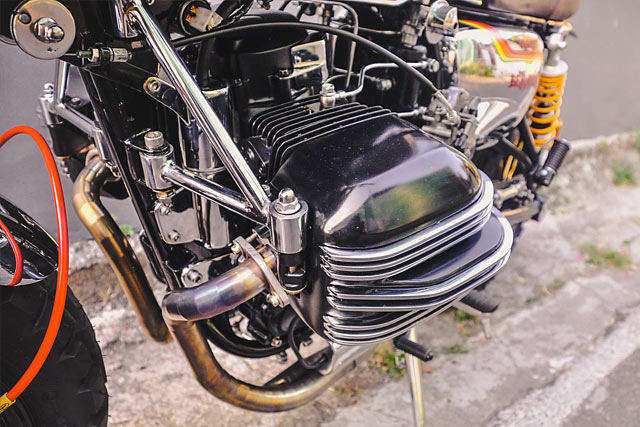 Then we got down to brass tacks. How the hell do you go about taking two single cylinder engines and making a boxer out of them? “The engine uses two Kawasaki W175 engines that we combined and upgraded to a 400cc capacity using a boxer engine configuration. To get the power into the original crankshaft, we used a gear transfer system; the bottom of the motor still uses the factory gearbox. There are some parts that use components from other motors, but there are also many custom handmade parts.” But that’s just the start of the engineering genius. “For the new oil routing, we made a kind of storage tube. From the engine, the oil goes into this reservoir first, where it is routed to several different places. And to move it around we used two pumps. One pump is attached to the motor and the other is an electric oil pump which was chosen for faster oil circulation. There’s also two magnetic rotors: the original one at the bottom of the engine which functions to charge battery the and one at the top which generates the ignition current.” 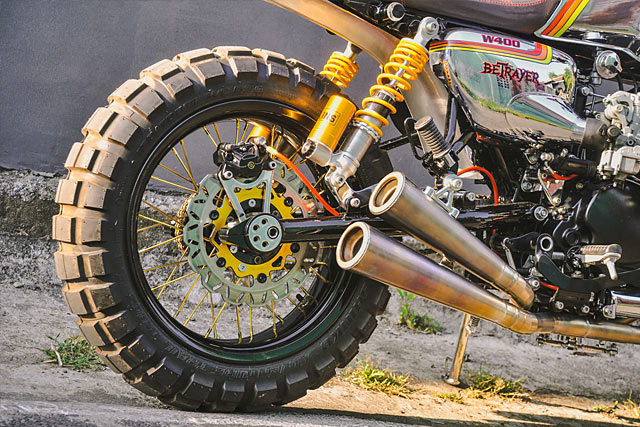 So, once we get our jaws off of the floor, what else should we be looking at? “We also very much like the gas tank because it looks like that cool Moto Guzzi V7 unit. And we spent many hours modifying the exhaust so the rider can choose between loud and soft at the flick of a switch.” A tracker and a scrambler. Two engines in one. Two exhausts in one. Talk about double the fun. 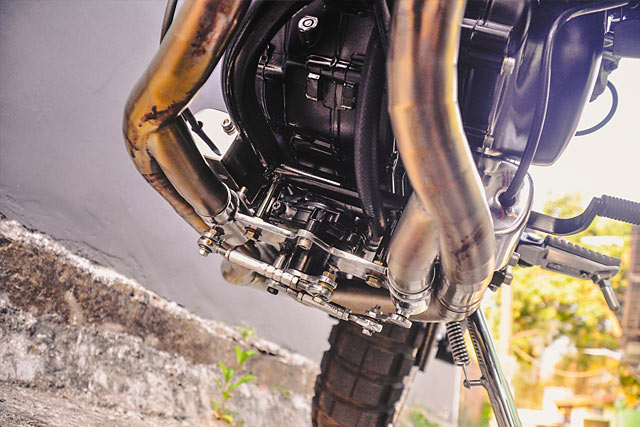 ‘I’m pretty sure it came like that from the factory, officer…’ Loud and soft at the flick of a switch