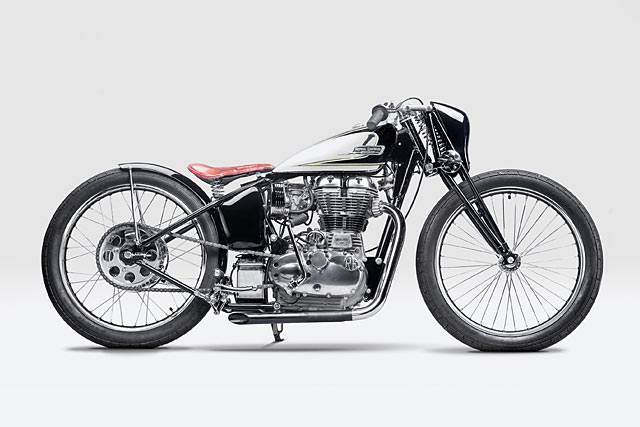 One of the best things about running a motorcycle blog are the friends that we make around the world. We’re on solid beer-drinking terms with builders in the US, across Europe and Australasia. But the guys that we really love are the mad buggers from Indonesia, like the team from Lembinc, who’ve crafted up one of the most kickass Royal Enfield Bullets we’ve ever seen. Java’s Lembinc is headed by Rizqi Patama. And the cheeky bugger isn’t even a fabricator or bike builder by trade. He works for a design agency. Although it has to be said the highlight of his year is designing the Sekepal Aspal MotoArt Exhibition in Jakarta, a huge event that brings together all the best builds from across the archipelago. 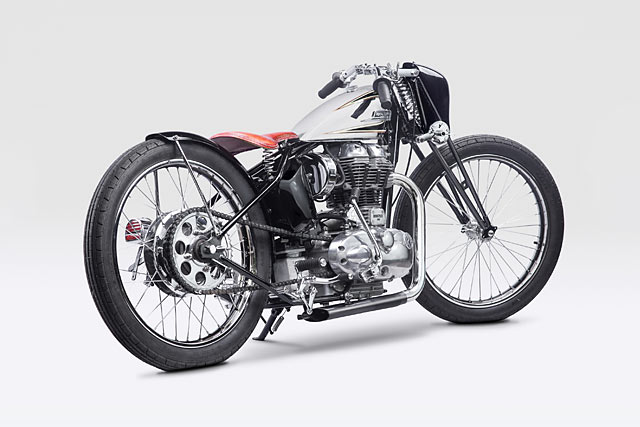 But thankfully for us, by night he turns his talents to bike building. And he’s really into the design angle, with plenty of time spent planning a build before lifting a hammer. “I made a lot of sketches for this project,” he says, “For me, sketches are a must”. So he nutted out the plan on photoshop to determine the direction of the build. He landed on this, a 1930’s inspired board tracker. 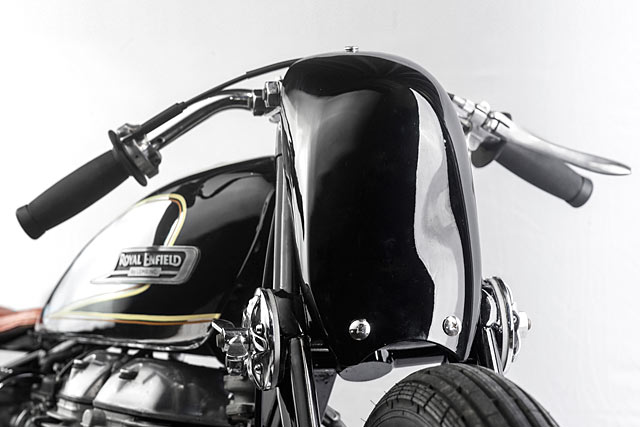 Despite the hours slogging away in Photoshop, when the design was finalized Rizqi went about things in a decidedly old-fashioned way. “I made a 1:1 scale drawing on my garage wall,” he says, “I know it sounds like an old way of doing things, I believe that nothing in the world can beat the human feel and sense. I drew it to feel every single curve of the bike”. 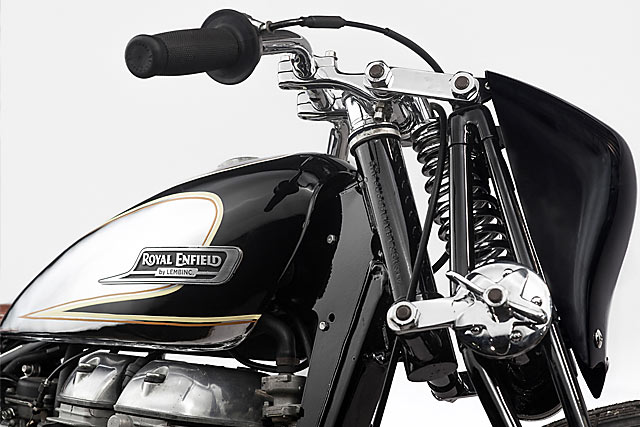 Then it was time to get dirty. “After everything was torn down I kept the engine, the electricals and then chopped the rear subframe. I then put it on the table jig beside my drawing”. To get the proportions bang-on, he made up a pair of 21” wheels. The front is a Suzuki TS125 mounted to a bespoke hub and the rear is a mash of custom parts and CB650 brake components. 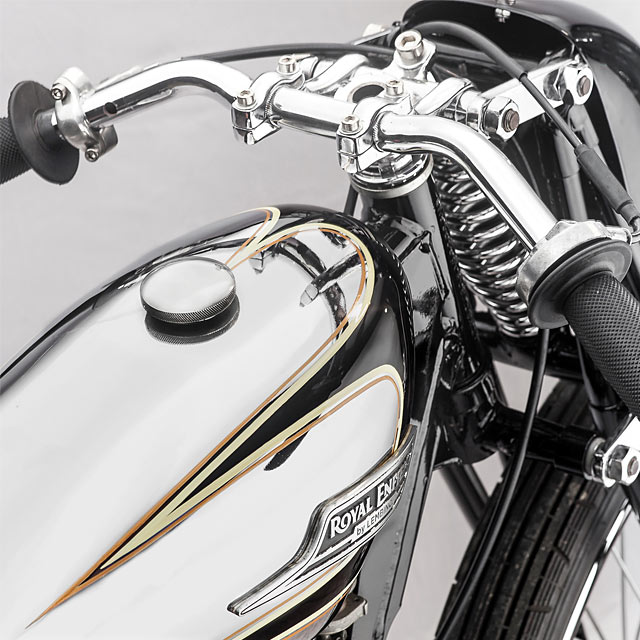 That’s where things with the custom Enfield became a royal pain in the ass. “The hardest thing was the rear brake system,” Rizqi says. “I had around five attempts at making the rear brake linkage. I had to transfer the brake lever from the right side to the left side, all because I changed the rear drum”. But when that was sorted, work moved onto the lines of the bike.

“That’s where things with the custom Enfield became a royal pain in the ass.” 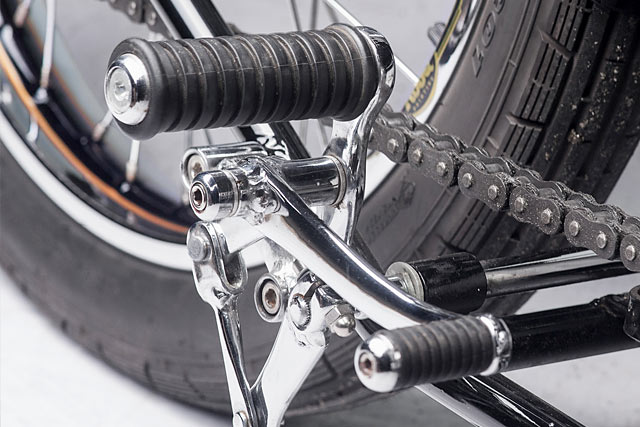 “My main concern was the stance,” Riz recalls, “So I did plenty of adjustment of the ground clearance and the wheelbase”. Rizqi drew inspiration for the girder front end from the ol’ BSA M20, stretched 2cms longer and with some simplified mounting points. Looks the goods, doesn’t it? The rear sub is custom made as well, from ½ inch stainless steel pipe. 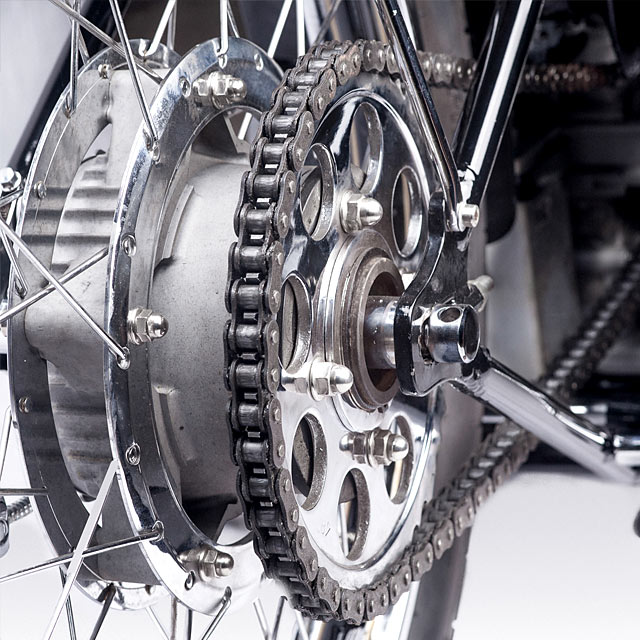 After the frame and wheels were assembled and the all-important stance was decided upon Rizqi moved onto the bodywork. The tank and nosecone were first made from high-density styrofoam, cut and shaped to make sure the proportions would suit the rest of the build. From there the sheet metal patterns were developed and finally, crafted into the masterpiece you’re seeing here. 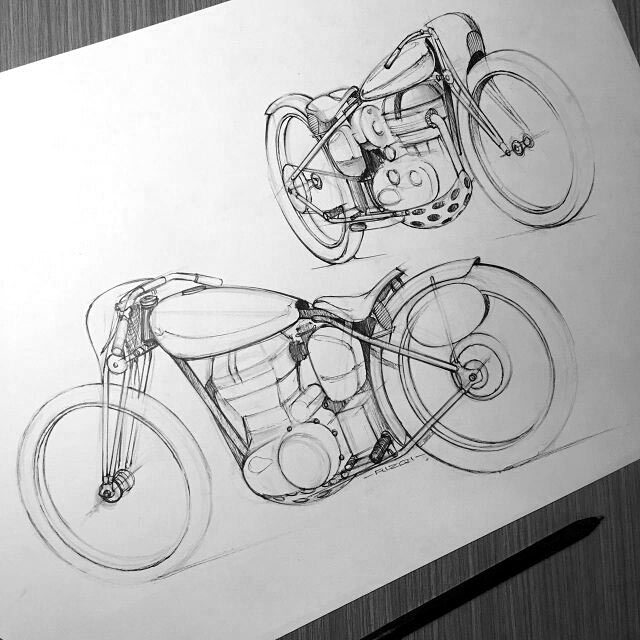 The tank was chrome-dipped and finished with a classic scallop paint job by local heros Evo Cycles Work. The rest of the frame and nosecone were finished in gloss black, while plenty of other detail parts went in for chrome dipping. From go to whoa the whole build took three months. Riz prepares the bike for the 2018 Kustomfest show in Jogja

That’s time damn well spent, with the little Bullet being a stunning example of what Lembinc can do. And it’s a blast to ride. “It’s totally different,” Rizqi explains, “You can feel the responsive acceleration because I’ve made the rear sprocket bigger. It looks classic, but has a sportsbike-like riding position. And of course, it’s a cop magnet here!”