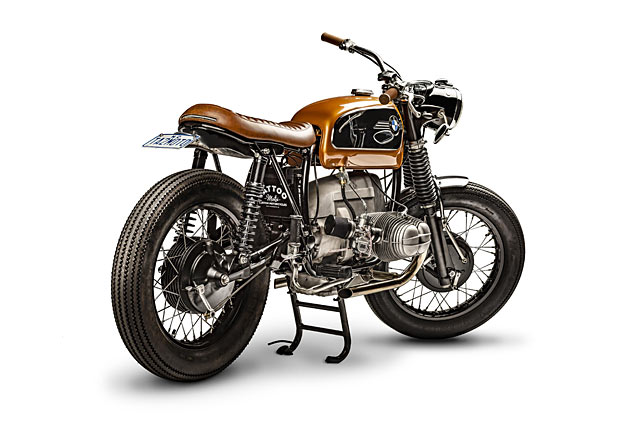 We’ve all heard the one about reinventing the wheel. But what happens when your wheels go missing? For North Carolina’s Tattoo Projects, a set of rims that took a detour into the twilight zone transformed a relatively simple BMW custom job into a bureaucratic nightmare that took no less than seven months to straighten out. Persistence, thy name is Rudy Banny. But it only takes one look at the end result to know that it was all worth it. Meet the prettiest pain in the ass you’ll ever seen; a BMW R75 they now call ‘Bane’. 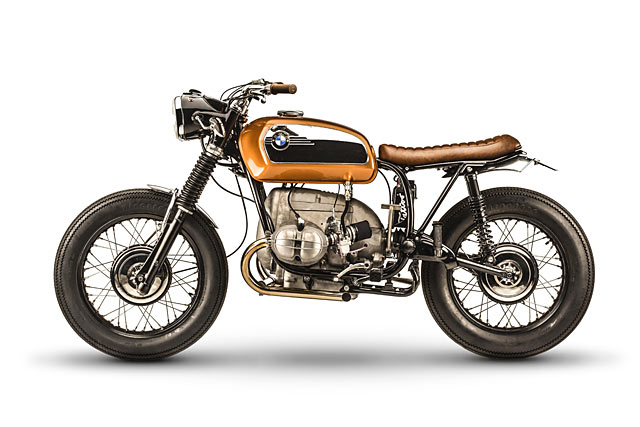 “We decided to do something totally different,” says Rudy in opening. “We wanted to create a bike that we would call a ‘standard’. It seems like everybody and their brother is out there building gorgeous café racers, scramblers and trackers these days. And they’re making some really nice stuff – but honestly, we were just getting a little bored and were ready for something different. So, we eschewed the status quo by building a simple, straight up, meant-to-be-comfortably-ridden-every-day, standard motorcycle.” 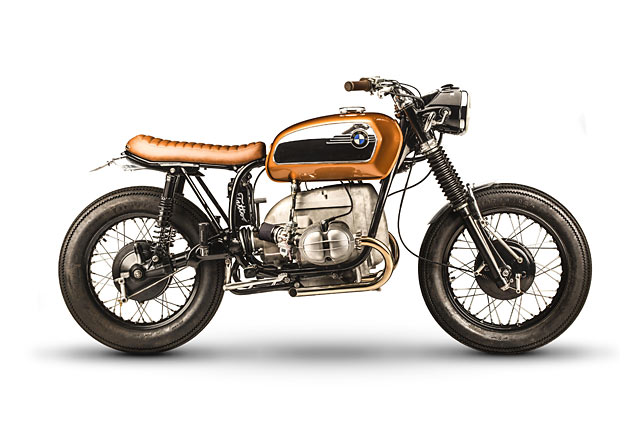 Webster’s Dictionary defines a “bane” as “a cause of great distress or annoyance”. And as you’ll soon find out, this name fits the bike like a glove. “A former pal of mine, Richard McDevitt, was threatening to buy it,” continues Banny. “He taunted me with pictures and illustrious stories of this magnificent barn-find that he was gonna pick up for a mere $1000. I admit it: I was jealous. Fate was on my side and he bailed on the bike. So, sight unseen, I committed to buy it. The seller was a professor at an esteemed University. He dazzled us with pictures and stories of his romance with BMW’s from the 60’s. Flying to Germany, purchasing a brand-new Beemer when he landed and riding it to Israel for an archeological dig. Years later he settled down, got married and stored a newer version of the bike in his garage. And there it sat for the next 40 years.

“Webster’s Dictionary defines a ‘bane’ as ‘a cause of great distress or annoyance’. And as you’ll soon find out, this name fits the bike like a glove.” 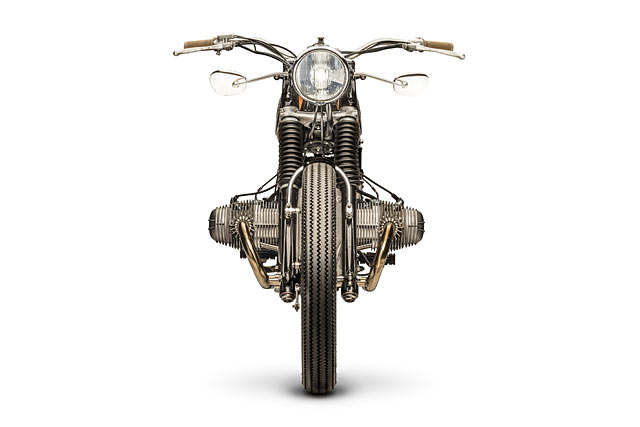 Rudy’s inspiration was tried and true: nostalgia and romance. The previous owner’s stories really stuck with him. He wasn’t going to do another wrist-breaking café racer nor a street tracker that was good for 3 mile jaunts. And he definitely didn’t want another scrambler that would be mostly ridden on pavement. “I wanted a classic motorcycle. Clean, simple and easy to ride. Something with an upright position for leisurely weekend riding around town and through the countryside with an extra portion of seat for a companion. Maybe they’d tag along for a Sunday picnic by the lake.” 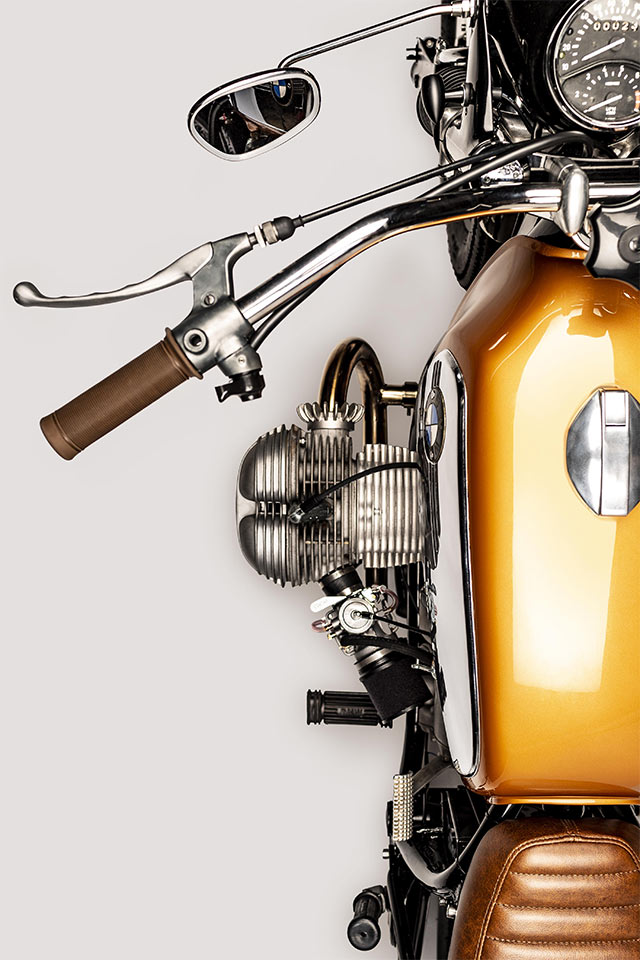 “From sitting for 40 years without having been properly put up, the motor was seized up like the Greek Discobolus statue with a bad case of tennis elbow. So we busted that paper weight wide open, polished it up, threw a new pair of 1000cc jugs on it along with a couple of Mikuni 38mm carbs. The second thing we did was to send the wheels out to be powder coated and rebuilt with stainless steel spokes. Meanwhile, back at the shop, we re-finished every OEM part we wanted to salvage. We chopped 7 inches off the subframe and sent everything out for powder. We were cranking, full steam ahead.”

Next, they rebuilt the forks with stiffer springs and picked up a set of Ohlins ‘Black Out’ shocks for the rear. Being partial to the toaster tanks, they went on the hunt and found one. The outside was worn, the chrome was pitted, but the interior of the tank was mint. A little elbow grease and a couple of coats of Curry Metallic paint and they were as good as new. “When the frame came back from powder, we put the few parts that we were going to keep on this bike, back together. We slapped the motor in, swing arm, forks, tank, a very wide set of bars, all new wiring harnesses, a seat, a couple of fenders and… no wheels.” 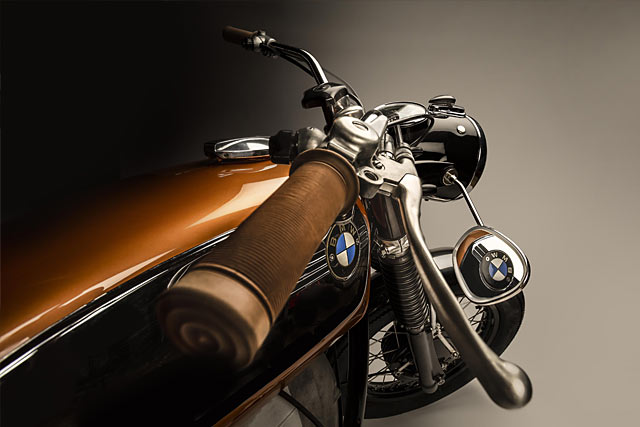 “Did I mention that we still didn’t have the wheels? Yeah, we had a bright shiny new set of Firestone Champion Deluxe’s waiting to wrap themselves around those beautiful gloss black and stainless-steel wheels. The shop needed three months to get the wheels done, but I knew the quality of work would make the wait worthwhile. Finally, I received notice that they had been shipped. I’d be finishing this bike in a week, tops. But somehow the USPS misplaced the 30lb, 24 inch by 24 inch by 12 inch box. So, I called. And called. And called. The United States Postal Service gave me the run around for another couple of months and took zero responsibility. The wheels, to this day, have never turned up.” ‘Neither snow nor rain?’ they said. Not always, it would seem.

After a couple of weeks more, Rudy found a new set on Ebay. And when they arrived, they were rubbish. Back to the hunt. He found another set and made the purchase. After another couple of weeks of waiting, they finally arrived and were given the thumbs up. Four weeks later he finally got the finished wheels. And not a century too soon. 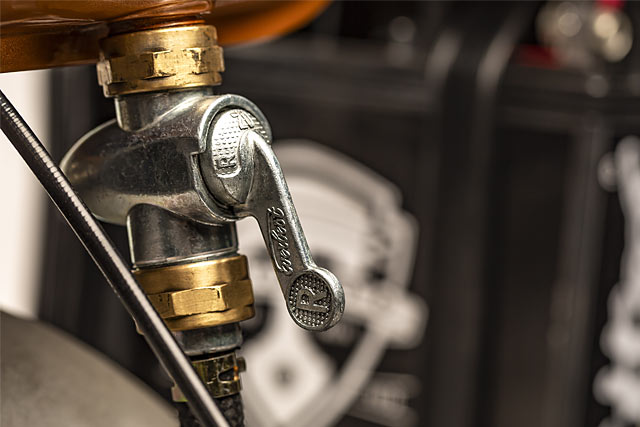 Three sets of wheels, 7 months and three package carrier services later, the bike was ready for the road. “Putting all that hassle aside, it’s the pureness and simplicity of the bike that really appeals to me. No glitz. No glamour. Just two (complete pain in the ass) wheels, a big-ass motor and one wide-ass set of handlebars.” And if you’re in the market for a new set of wheels for your BMW, there’s a guy we know in a North Carolina Post Office who’s got a pair going real cheap… 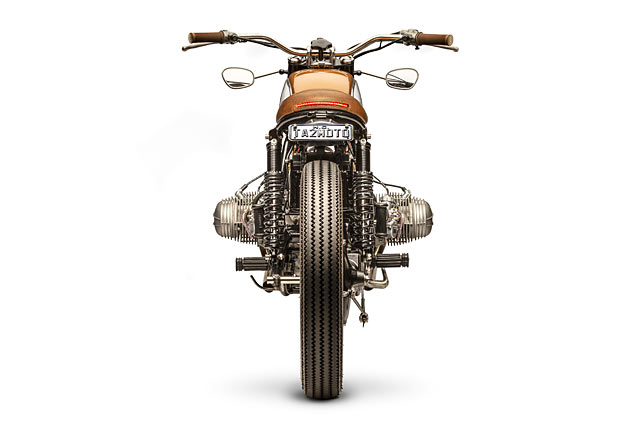