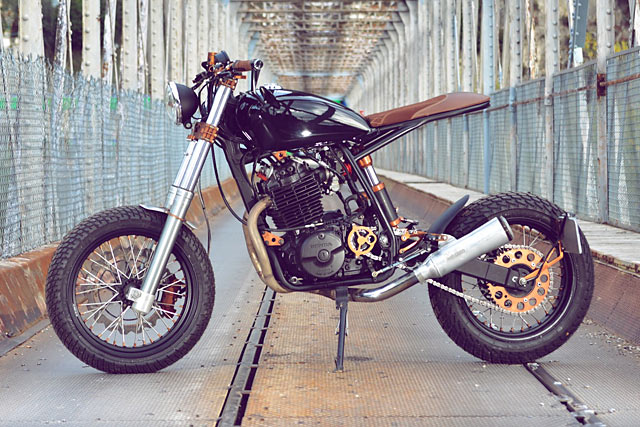 Last night we had a bike builder that had reverted to a classic, or standard, look for his build. A little tired of all the cafes, scramblers and trackers, he’d wiped the slate clean and started from scratch. Well, Lionel from France’s Duke Motorcycles found himself with a similar challenge, but his solution was quite different. Instead of looking back to move forward, he’s mixed and matched the cafe and motard genres to spawn his own style; a Honda XR600 he’s calling ‘a melenge between a supermotard and a cafe racer’. OK Lionel, you’ve got our attention. 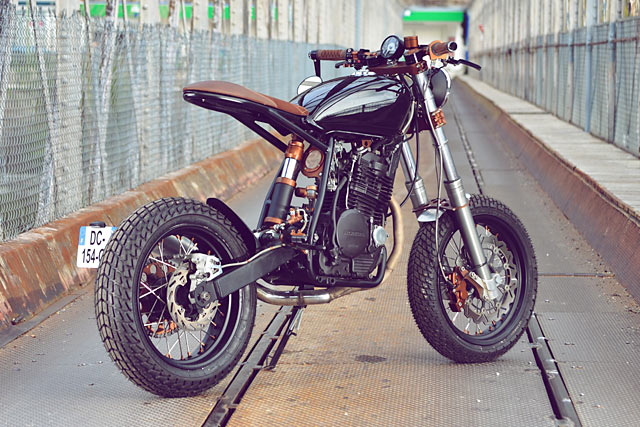 Heidenau rubber suits the look to a T

As always, we began by talking a little shop with Lionel. “Right now, the business is going well and we will soon attack a series of very beautiful Honda projects including a CB750, a 500FT and a big job on a Yamaha XS650.” Only the French could make customising a bunch of old, greasy bikes sound so damn poetic. 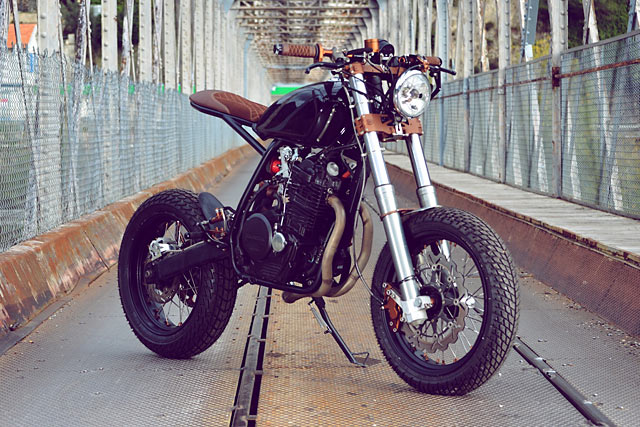 It’s important to note that Lionel wasn’t guided by the genre-mashing antics our story’s headline may have suggested. Instead, it seems clear to us the guy simply ended up here following his heart and an innate understanding of form following function. He calls the bike, originally an ‘87 Honda XR600, ‘difficult to define.’ We call it an innovation, and one that clearly harks back to France’s major role in the development of supermotards in the ‘90s. 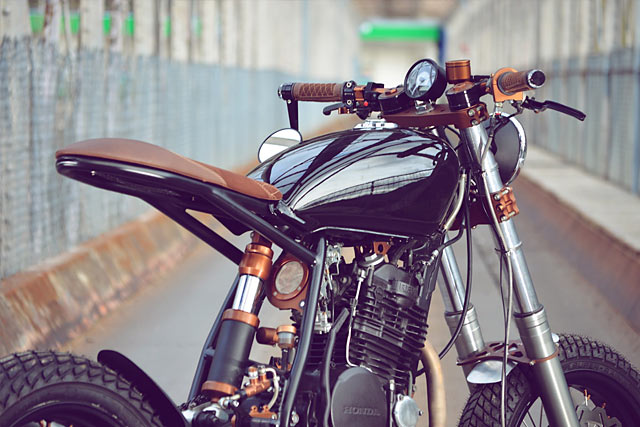 “The bike was supplied by my customer, Samuel, who originally purchased it 12 months ago. It had already been customised, but in my opinion it didn’t really work. Yes there were some interesting things that had been done, but there was also a lot of things that had gone wrong: there was no electricity, no brakes, a leaking tank, the seat was broken, the forks had given up and the engine did not start.” Just a few things to fix, then.

“There was no electricity, no brakes, a leaking tank, the seat was broken, the forks had given up and the engine did not start.” 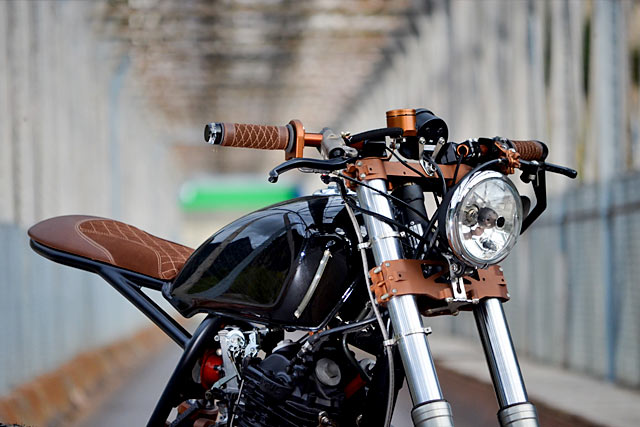 At the beginning of the project, Lionel was in two minds. Should he repair all the problems or start from scratch, maybe keeping some pieces which were nice. “After a complete analysis, I decided it was more interesting to tear it down and start again, so I took everything apart and cut the frame as a first step. The customer wanted this bike to keep the XR600 ‘spirit’, but in a very light, very trim form. And we also wanted to keep the height of the original to give it even more lightness.” 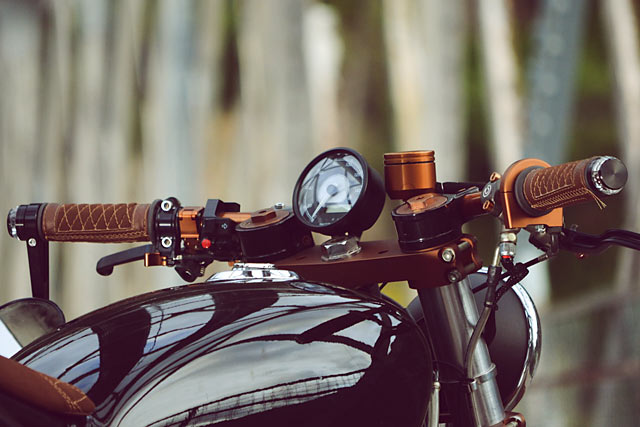 “I have integrated the rear light into the frame loop so that it is almost invisible and I paid extra attention to the seat and grips, giving them an almost ‘tailored’ look that matches the bikes bronze anodising. The reservoir comes from an SR 125 which was modified to fit here.” The rear shock is from French outfit Fournales, while the origin of the refurbished front forks is unknown and simply labeled as ‘very massive’ by Lionel. 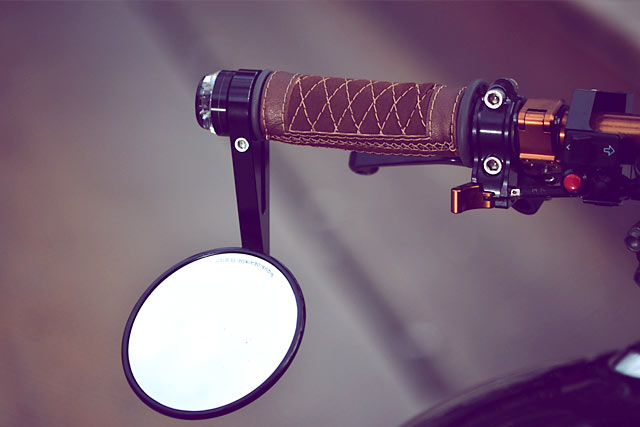 For slowing the whole show down, Mr. Duke has a Beringer caliper and master cylinder at the blunt end and a radial Brembo unit with matching master cylinder up front. And his choice of Heidenau supermoto Super Rain tyres for their racing origins, beefy cross-section and damn fine looks should upset no one outside of Dunlop, Bridgestone and Continental. 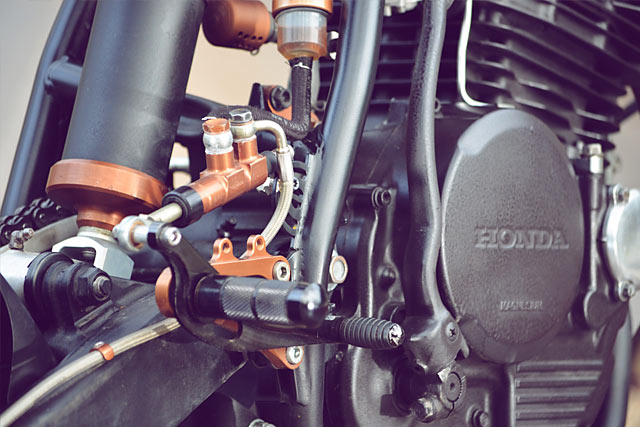 The mudguard is made to measure and includes one of the nicest mounts we’ve seen in quite a while. The engine has been completely redone, the carb is a Keihin FCR-39 direct intake jobby, a SuperTrapp muffler has been added to improve the exhaust’s looks, the headlight is a basic Harley-Davidson item, the ‘bar end turn signals are Motogadget’s and the dial is from Daytona. 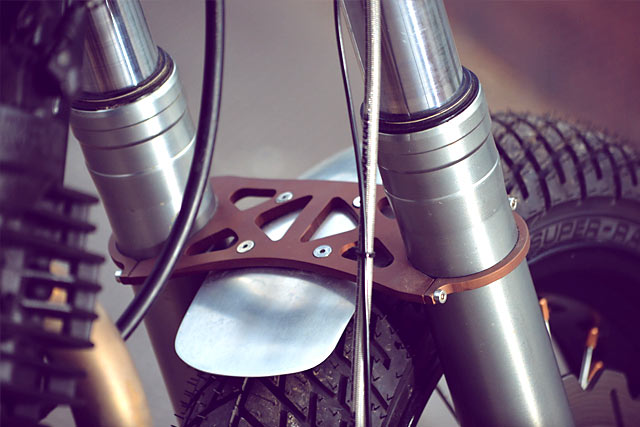 “The most difficult task here was to do something different; as a base the Honda XR is used quite a lot. My decision to give it a ‘luxury’ side just added to the challenge. By far my favorite part is the back frame loop and the seat, because it turned out looking very clean and neat.” And as you can see by the photo below, the man ain’t just whistling Dixie. We can’t wait to  see what he does next. 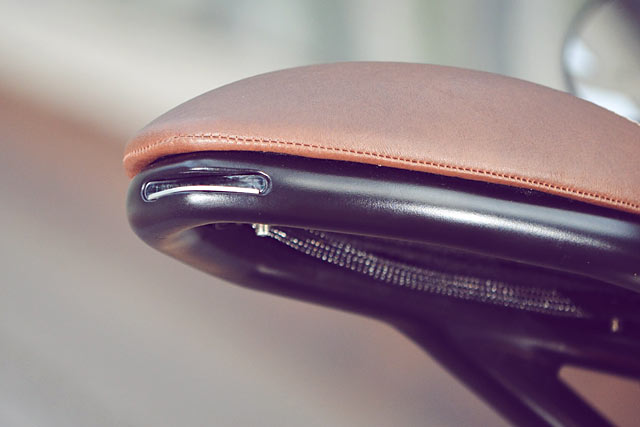