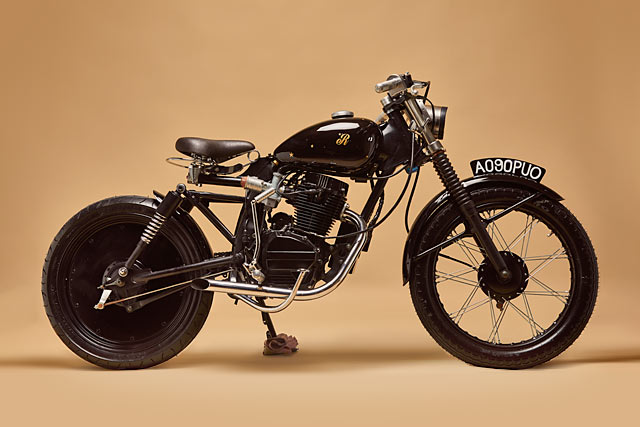 When it comes to creativity, they say there’s a fine line between inspiration and insanity. It’s no coincidence that rock stars go off the rails in a spectacular fashion and artists often need to break down before they break through. But luckily for Argentina’s Republica Motocicletas and this 150cc Zanella Sapucai, it was their client who was the crazy one, and it was their own creativity that was the big winner. 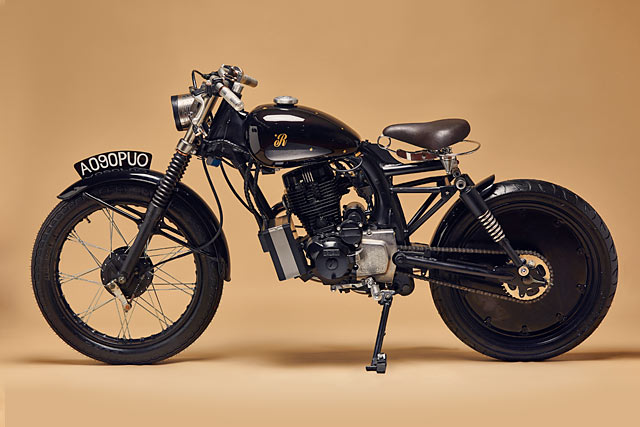 Chatting to us from their workshop in Córdoba, Argentina, the boys jump straight in. “In our lives, we dedicate ourselves to our business and families but making custom motorcycles is our one true passion and one of the things we do best. We hope it shows in all our bikes.” 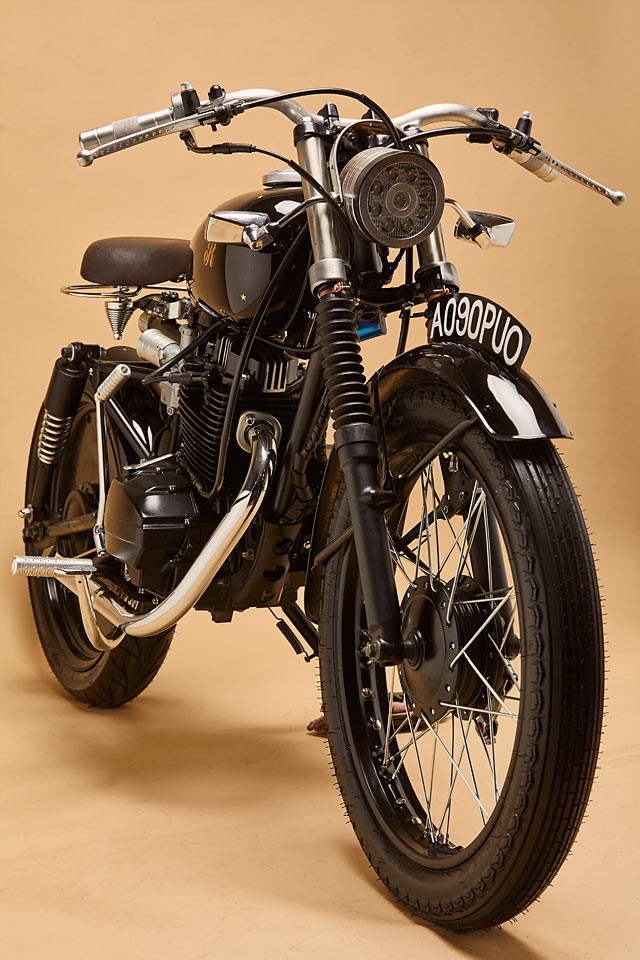 “We always say that in our workshop we do not sell motorcycles, but rather that we sell life experiences or that it is a happiness factory. With each client, we really try to foster a special bond and mutual understanding. We like that each client is part of the process; that they visit us and really get involved. We try our hardest to give each project a special touch and we know that each motorcycle has a different DNA which must be discovered.” 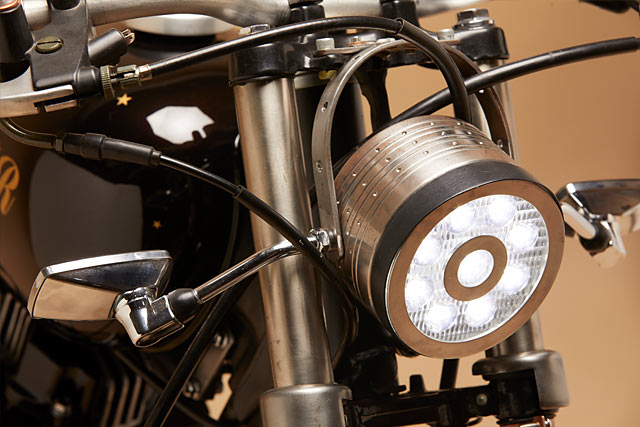 But when the conversation turns to this, their newest creation, things get decidedly revenant. “This motorcycle, to the best of our knowledge, is the finest we have ever made.” The serious tone underlies their intentions here; they’ve pulled out all the stops on this one. “It is a Zanella Sapucai 150cc from 2016.” Zanella, for those like us who were none the wiser, was started in 1948. They licensed engine designs from Italian engineer, Fabio Taglioni, from Ceccato motorcycles.

But it’s when we ask about the bike’s name that the mood suddenly lightens. “‘Caniche’ means ‘Poodle’. It’s a mad bike, just like its owner. He is really crazy – you have no idea.” Oh, I think we do now. 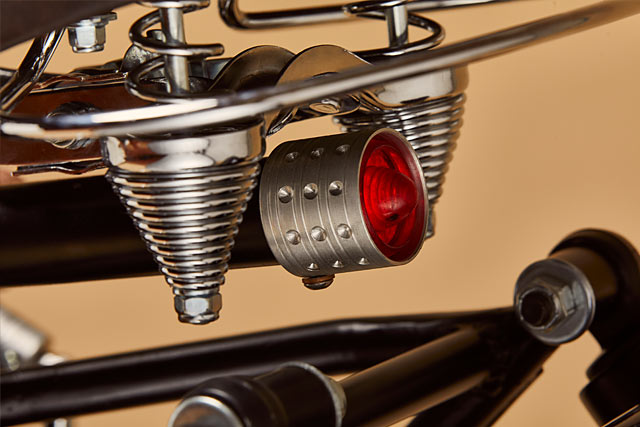 Just one of the bike’s many great details

Clearly, it was a really different project for the boys. Sensing this, they tried their luck and insisted that they would do it only if they could give it a really different, over-the-top touch. “In other words, crazy like its owner.” His brief to them kind of backs this up. “He literally brought the bike in and said, ‘I trust you 100%, so design me something that lives up to the shit you’re always talking. Then he walked out.” Challenge accepted.

“I trust you 100%, so design me something that lives up to the shit you’re always talking.” 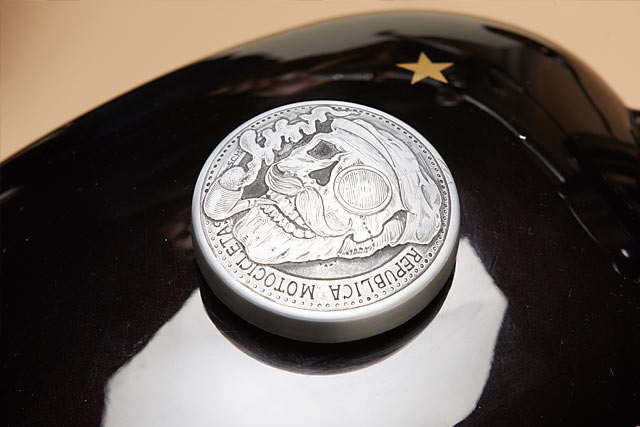 “From the start we wanted something with a cool, retro style. We used an ’87 Harley-Davidson tank with twin fuel lines. And also, this bike has many details made from aluminum, bronze and copper.” Seeking to achieve a finished product with as many clean, neat details as possible, they made a whole bunch of  parts by hand – including the lights, pegs and grips – in the same material so that they were all perfectly in tune. 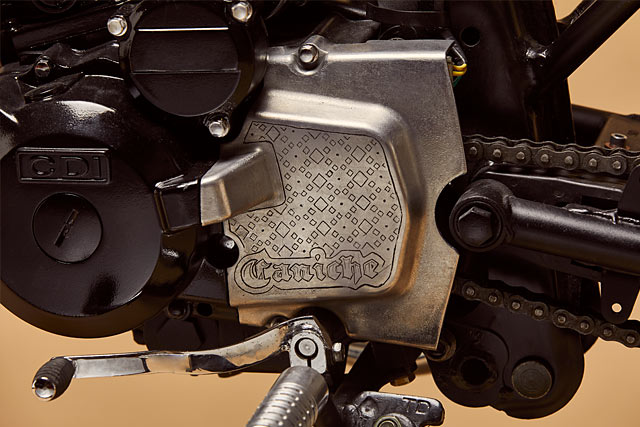 The bike is crowned with an old bicycle seat that was inspired by the classic English motorcycles of the ’40s. But that’s not really so crazy, is it? “One detail that’s really from another planet is the custom headlight and brake light surrounds. It gives the bike a small futuristic touch, and it also proves that sometimes we can not go against our natural instincts and love of opposites.” 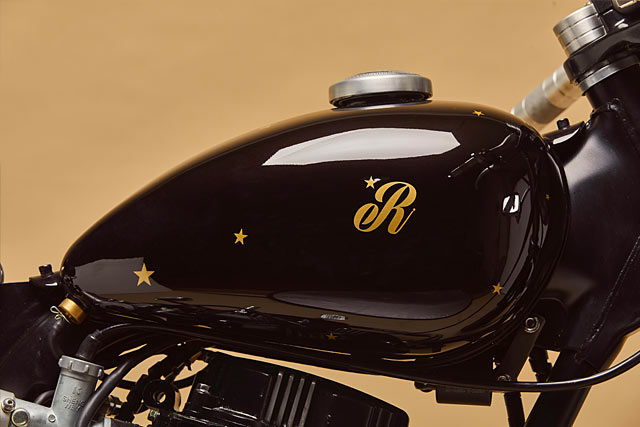 The tank is painted in two colors; at first glance you’d most likely think it’s black, but when seen in daylight it has a deep red tinge to it. Both the shop’s logo and the stars are golden, and the whole unit is crowned in a hand-engraved aluminum fuel cap designed and engraved especially for the project. 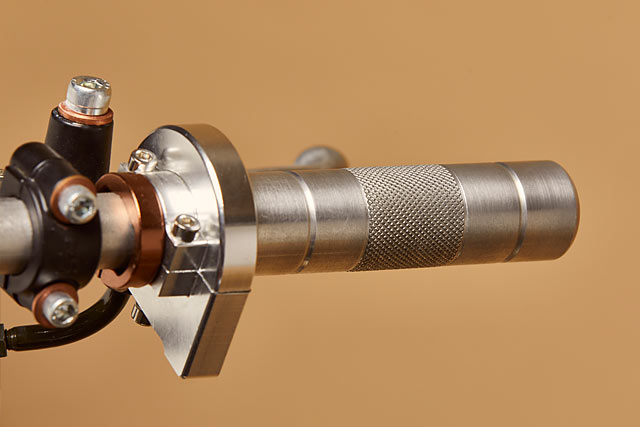 And while the bike’s owner might seem a little weird, you’d have to question just how nuts he actually is to be able to set in motion something that ended up looking like this. “In the end, we think that the attitude of our client was probably more magic than crazy. It’s almost as if he planned it that way.” You don’t say. 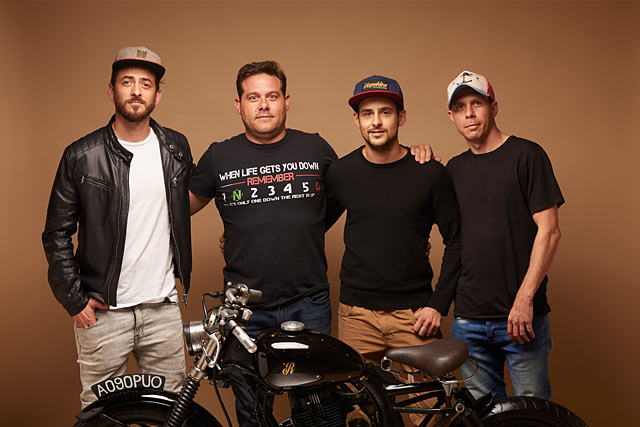