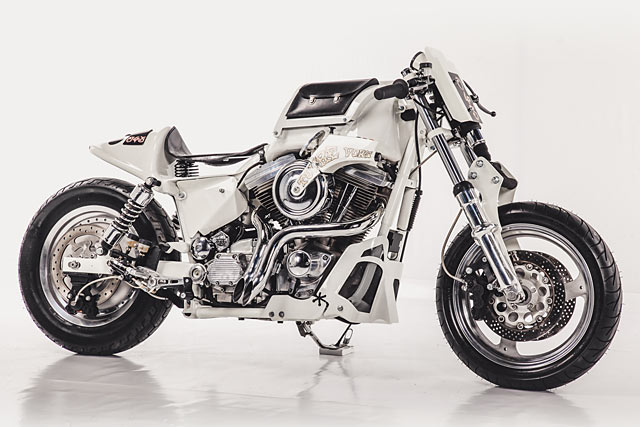 It’s time for an embarrassing confession. In the past, I have looked at some of the winners of the AMD World Championships and had a giggle. Or two. Hell, sometimes I’ve LOL’d, if that’s what the kids are still calling it these days. I’ll be frank – there’s some totally insane bikes in there. Crack smoking, batshit flinging, head scratching, crazy-ass bikes. Which somehow makes the cool ones look even better than if they were all by their lonesome. Enter Dutchman and bike builder, Nico Naeye. Without the prerequisite airbrushed skulls, flaming eagles and lime green neon lights, Nico has somehow managed to deliver the best and most unique Harley cafe we’ve seen in ages. 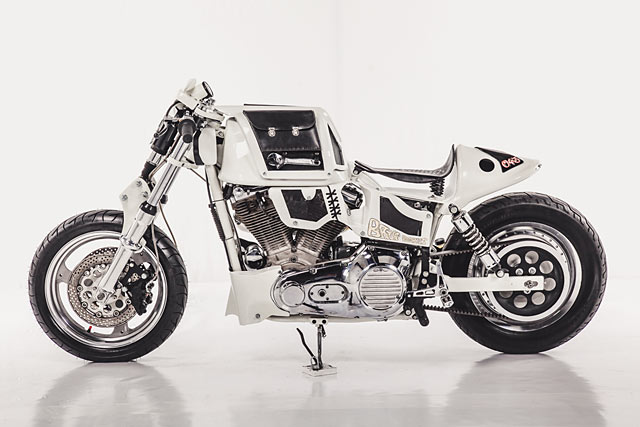 “I’m a 43-year-old bike nut that has been tinkering on motorcycles for 25 years now,” says Nico. “At first, I was a complete novice at the mechanical stuff but I learned the hard way by messing up cheap Japanese bikes which nowadays seem to have become classics. The internet wasn’t around back then, so you had to get all your knowledge from books, magazines and the old bikers. And if there is one thing I learned over the years, it’s to shut up and listen when the old timers are sharing some valuable info with you on how to solve problems – especially the roadside repair tips.” 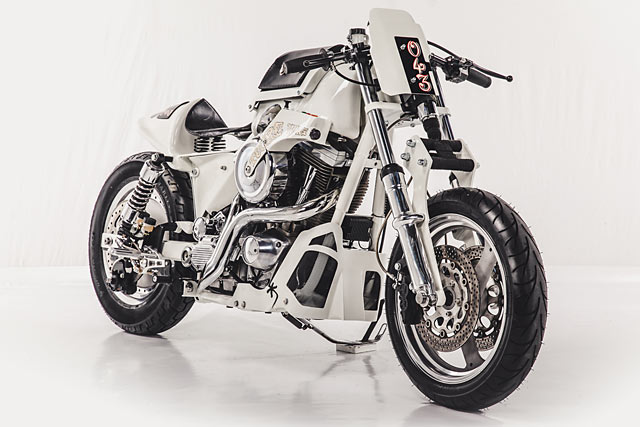 Nico had been working in transport for 15 years when he got a shot as a mechanic at a Harley-Davidson dealership, some 8 years ago. “They needed someone who knew how to do maintenance and change tyres; the rest they would teach me in the shop and at the ‘Harley-Davidson University’ in wintertime.”

“I got the Super Glide 10 years ago as an already-chopped bike, but it was in good running condition and I rode it for 8 years, further customizing it along the way. The wife prefers the Honda GL1000 with the Ural sidecar to cruise around in, so the FXD was just sitting there collecting dust. But eventually the time came to give her a complete transformation.” 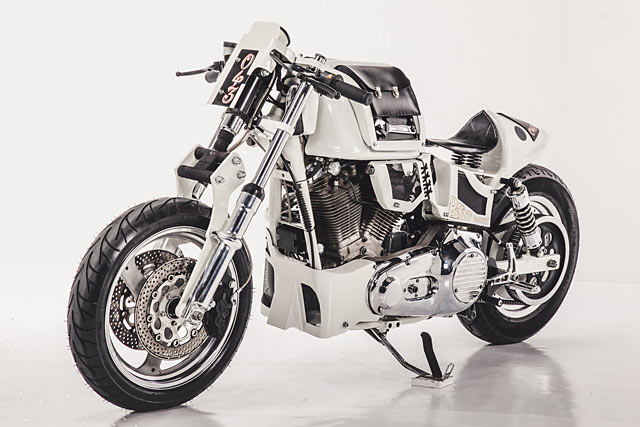 The goal Nico set himself was to make it a better braking, better handling, cooler-looking bike; he wanted it to be the bike Harley-Davidson should have built in ‘97. “You have to aim high, right? The front forks are a design I had been thinking about for 15 years now, and I was wondering why nobody had tried them before. They work great, and can be easily adjusted in minutes.”

“The goal Nico set himself was to make it the bike Harley-Davidson should have built in ‘97.” 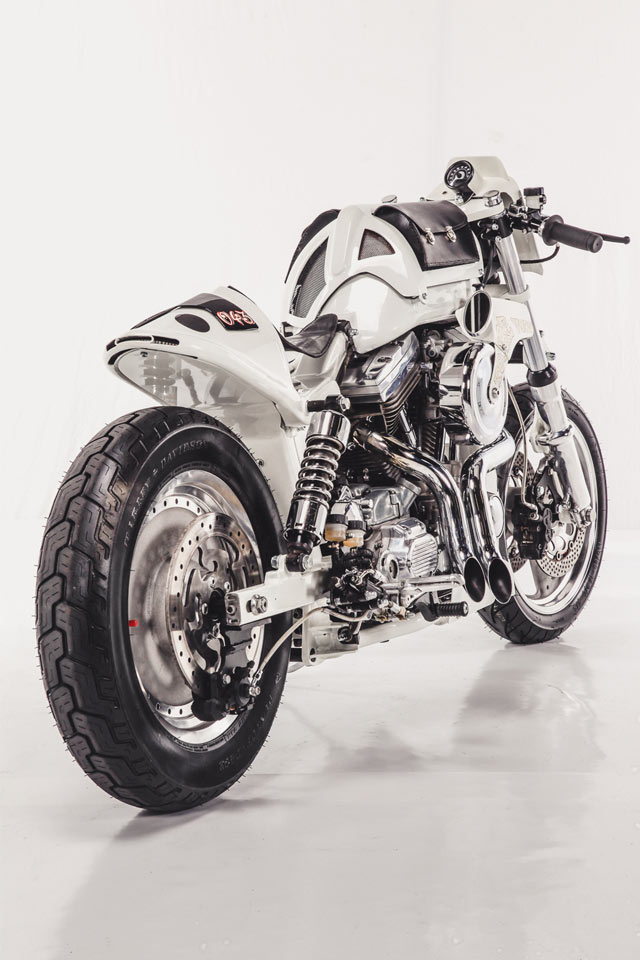 The fuel tank and rear fender were built from some bent touring bike crash bars that Nico had lying around in the scrap bin. “Four crash bars was all I needed for the tank and the fender. They may be a little on the heavy side, but they’re definitely sure strong enough to do the job.” 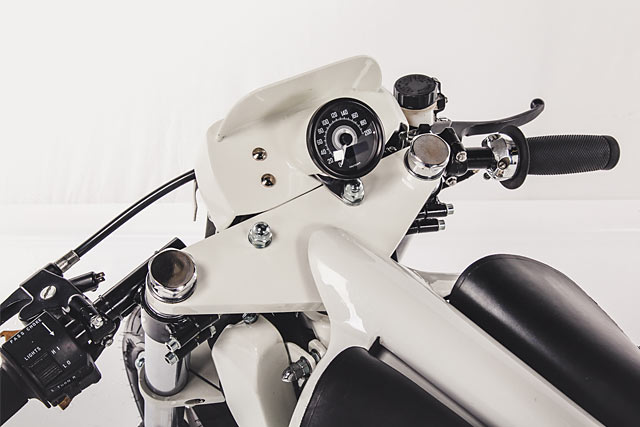 “The rest of the parts was stuff I had kept from older bikes which I adapted for this build. It was a great way to clean up the shed and find some forgotten treasures.” And speaking of hidden treasures… “My favourite part of the bike is probably the hidden headlight, tail light and indicators.” Also note the combo engine lights and the rear view mirror box mounted above the air cleaner. Nice. 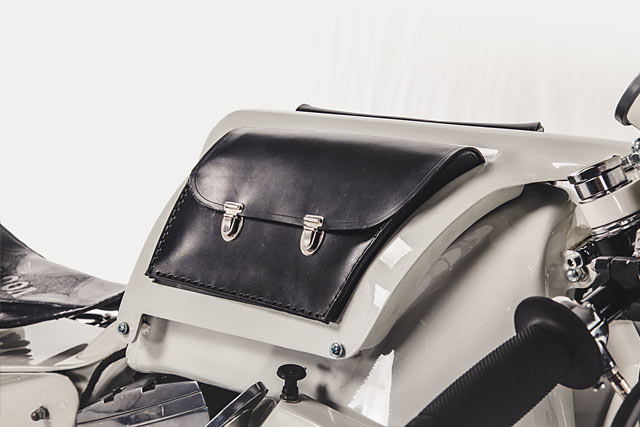 Nico says that the seat was a headache to say the least, mainly because he felt he wasn’t sitting high enough on a normal pillion pad and a 10 cm cushion looked out-of-place… and kind of wacky, too. “That’s how a bent steel plate on springs came to mind, which I’ve never seen on a sporty kind of bike.” Next came the brakes; at first the bike used only one front disc, but Nico decided to link the left front disc brake to the rear brake via two brake pumps and have it operated by the foot brake lever. Honda’s ‘Combined ABS’ and BMW’s ‘Integral ABS’ systems come to mind. “It took some experimenting to make it work properly.” No kidding. 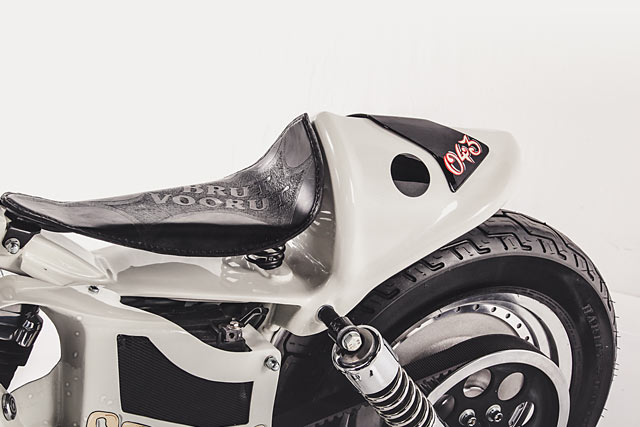 “For the paint, a professional was needed and Radical Customz did a hell of a job covering all my welding mistakes and making it look generally amazing. Another friend did the sign painting in Flemish. I called the bike ‘Brut Voorut’, which translates to ‘Brutally Forwards.’ 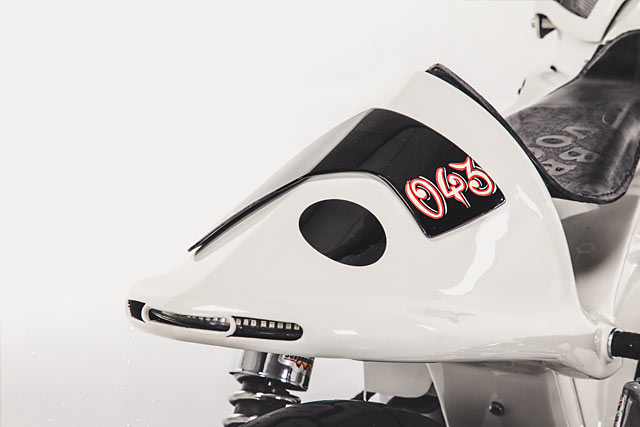 And what about the words on the air filter? “They say ‘Teure Vors,’ which roughly translates to something like, “Stop staring and get on with it”. The end result of all this outside-the-box thinking is a bike that runs and handles great, says Nico. “But the truth is that I like working on bikes more than actually riding them. Sure, I’ll be riding it around a little, but in my head I’m already thinking about doing another one. Who knows, I might even put it up for sale in the near future.” 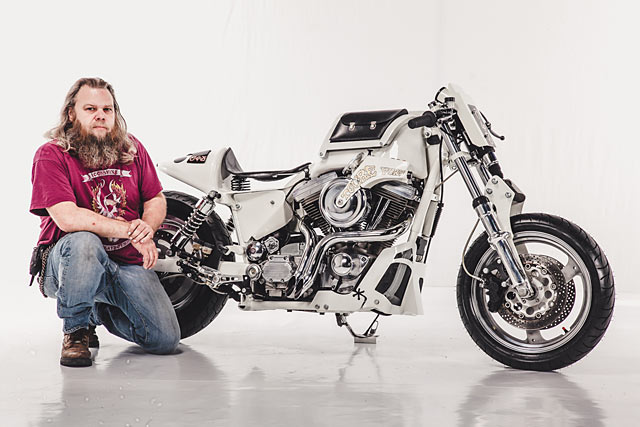