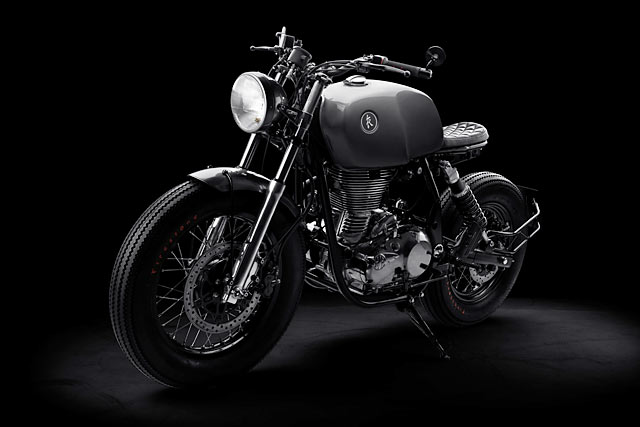 It’s easy for us in the west. Want to build an old airhead? Fire up Craigslist, go kick some tires and sooner or later you’ll have some Bavarian moto-goodness sitting in the shed. But in other parts of the world the dance is much harder. Like in Chennai, India, where Royal Enfield gurus KR Customs have crafted a sawn-off, BMW-inspired Continental GT. 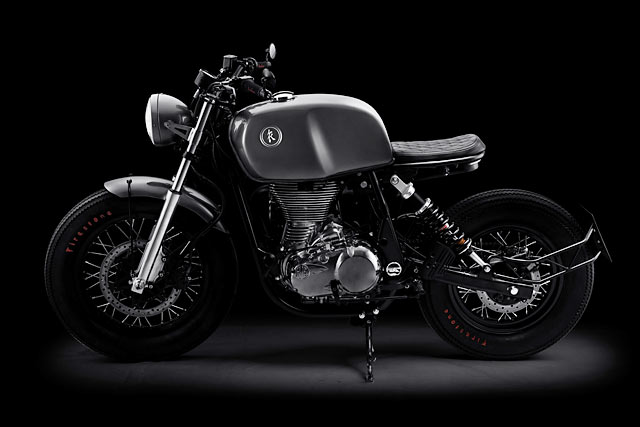 KR’s Krishna Rajan is a huge BMW fan. “During a trip to Switzerland last year I had the pleasure of riding a GS800. I knew wanted to make a custom bike with BMW at its heart.” And things started well, with Krishna stumbling across a great big ol’ airhead tank during a work trip to Princeton. “The tank was from the 80’s but looked in pretty good nick,” he says. “It was always a dream to make a cafe or brat style bike with a airhead tank as a centrepiece”. 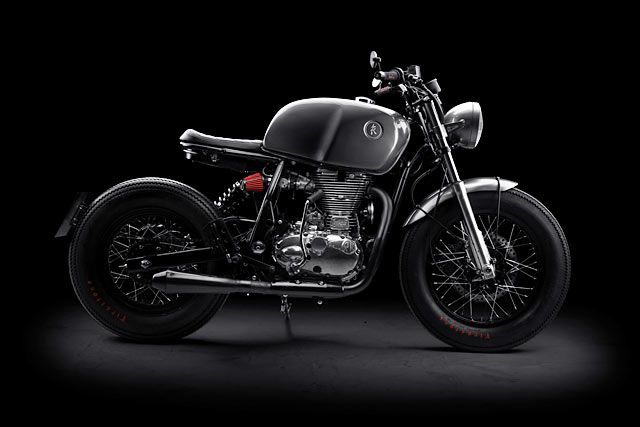 But there’s problems when trying to build a custom airhead in India. There aren’t any donor bikes kicking about. “We had no hope of getting a used boxer engine so we settled on a Royal Enfield Continental GT as a base,” Krishna recalls, “We picked up a used one for a couple of grand that had around 10k miles on it”. 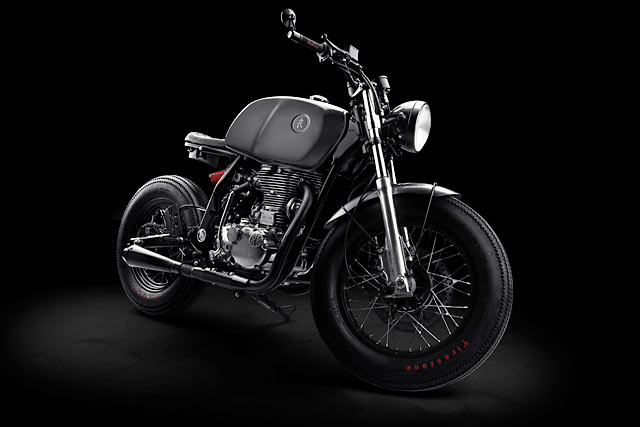 But this wasn’t going to be an easy case of a tank swap and calling it a day. Krishna and the team wanted to delve a little deeper into what makes a classic BMW look… well, like a classic BMW. After sending the engine off to blasting the frame was stripped and plans for a mono-lever were laid out. “There’s only a few choices for the rear shock set up,” Krishna says, “but we wanted to stick with an authentic BMW Monolever”. 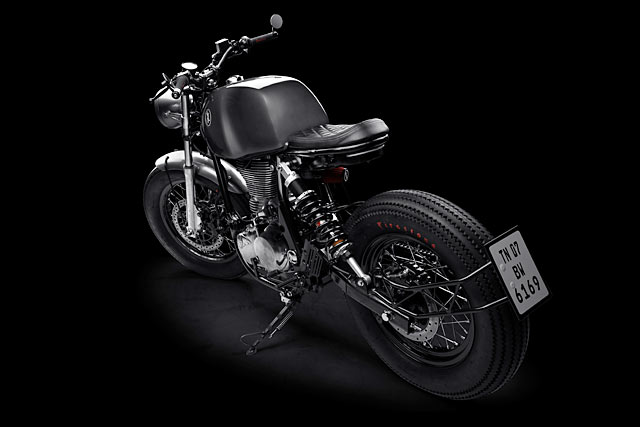 “We had to get our geometry right to mount to the GT Frame,” he recalls, “After a month of trying we finally had a position that worked well with all aspects and was also safe. The safety angle was definitely an issue as the whole bike is literally mounted on a single point so it had to be strong!”. Keeping the rear end under control is a YSS shock specifically designed for old airheads.

Up front there’s a bit more going on than you might first expect. Honda CB750 triple trees were mounted and a pair of forks taken from a Royal Enfield classic were mounted. On the bars themselves, billet switchgear designed in-house was matched to a Domino throttle assembly. The headlight remains stock, attached with a new set of brackets. 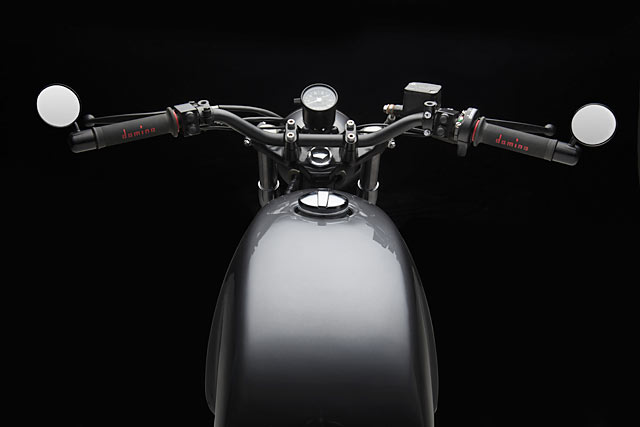 Then the centrepiece of the bike was mounted. Happily, the big airhead tank offered plenty of room for sneaking in the electronics underneath. The team opted to stick with the EFI system rather than go back to a carb, so the tank was holed out underneath and the fuel pump system installed. 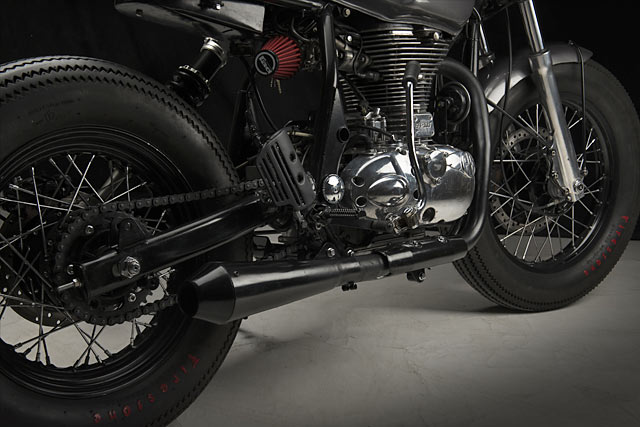 “The seat was configured in a more aggressive style,” Krishna says. “As a result we needed to use the space underneath to accommodate an electrical box that also housed an anti-gravity battery. The back part of the bike ended up looking a little ‘plain Jane’ so we decided to mount a hanging number plate, which seems to be the trend nowadays”. 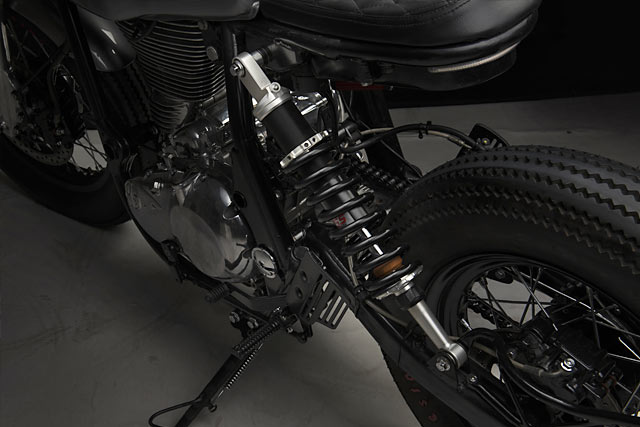 “We felt the tank was the pièce de résistance of the build, and needed a special color.”

The wheels are stock hubs mounted to aftermarket rims that run vintage-style tires. And then finally for a style decision. “We were were deciding to go for a Cafe or Brat Style. But since the owner requested some comfort on longer trips we decided to go in the direction of a Brat.” As a result, the Grigio runs an 18” hoop at the front and a 16” rim at the rear.

And why the ‘Grigio’? “We felt the tank was the pièce de résistance of the build, and needed a special color,” Krishna says. ‘Grigio’ grey, taken from a Ferrari palette, was laid down giving the stubby Royal Enfield a gorgeous, understated look. In my mind, KR’s airhead-inspired Enfield is every bit as beautiful as a BMW custom. 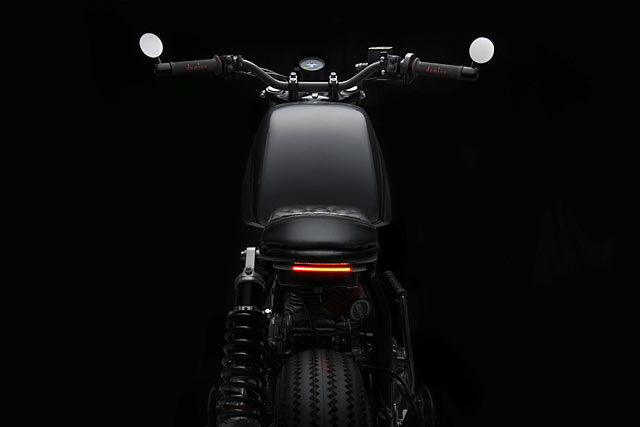