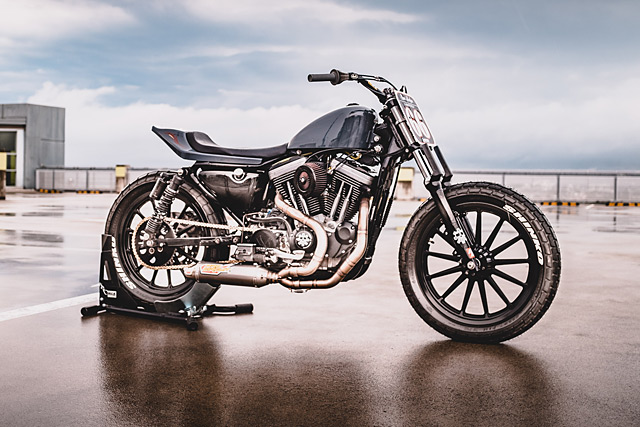 Hooligan racing is – as the name suggests – a hell of a lot of fun and when an Aussie caught a glimpse of the action he wanted in, bad. The machines are road-based; a mix of street tracker and dirt bike that rip it up on the flat track. For Australian metal fabricator extraordinaire Jamie Portelli of Fabtech Creations, a trip to the USA had him hooked and he started planning the build before he’d even boarded the QANTAS flight home. The end result is this rampaging 1997 Harley Davidson 1200 Sportster ‘Super Hooligan’ that’s ready to rip it up and then hit the highway after victory. 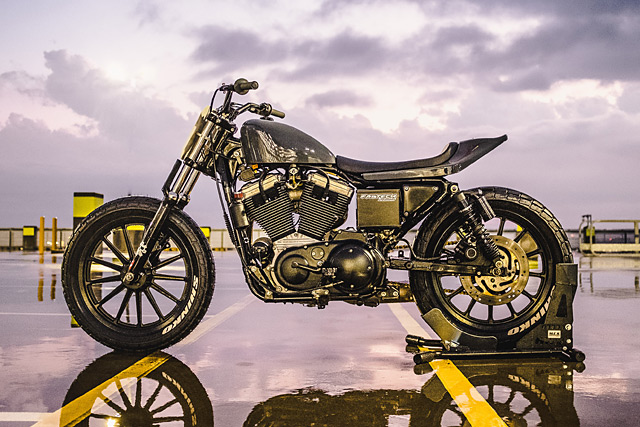 “I first saw the “Super Hooligan” bike race when it was introduced at the X Games in Minneapolis and instantly loved the flat track concept. I returned to X Games in 2018 to support friends who ride in the Super Hooligan series and was impressed with how far the concept and standard of riders and bikes had developed,” explains Jamie. Instantly he knew it was something he wanted to be a part of and started to make calls back home to Australia about suitable donor bikes that were for sale and also picked up a bunch of parts for the project before leaving stateside. 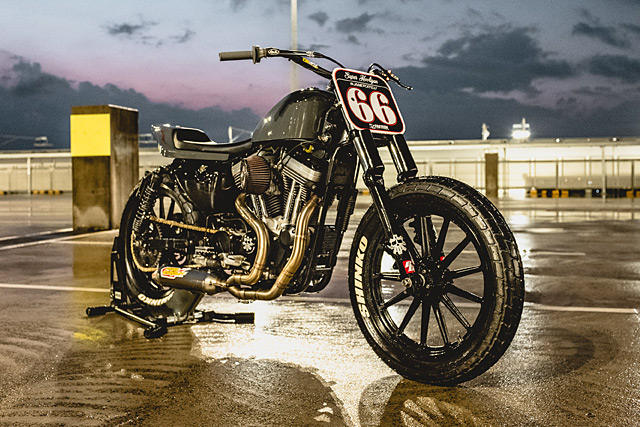 Arriving home, he took the 10 hour journey to Brisbane where he found the ’97 Sporty and it was just the right bike to get things going. As to whether he was up to the task of creating a Super Hooligan machine, it was never in question, Mr Portelli is no ordinary talent. He doesn’t just build bikes, but is also involved in the custom car scene, a range of high-end metal fab projects and was one of the men responsible for making Robbie Maddison’s Pipe Dream of riding a bike on the ocean possible.

“He was one of the men responsible for making Robbie Maddison’s Pipe Dream of riding a bike on the ocean possible.” 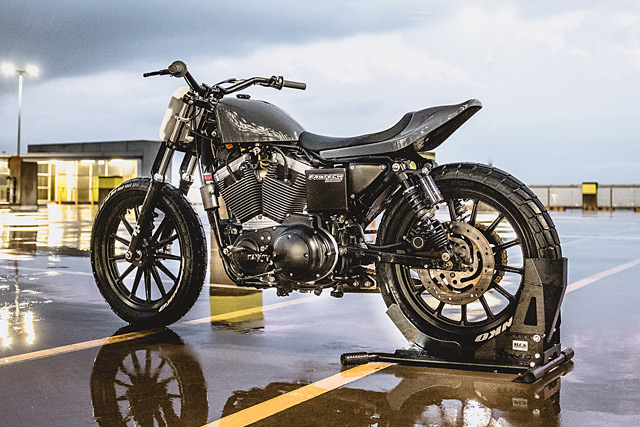 Mother nature really turned it on for the shoot

So it comes as no surprise that the moment the bike was in his workshop, he had it stripped down in a matter of hours. But before he started, he’d done his homework, “I researched the history, the builds and riding techniques and now must say have become completely hooked on the concept – I wanted to design, build and race. I knew I had the skills with the design and build but would now need to step outside of my comfort zone to learn the track side of things,” Jamie tells us. 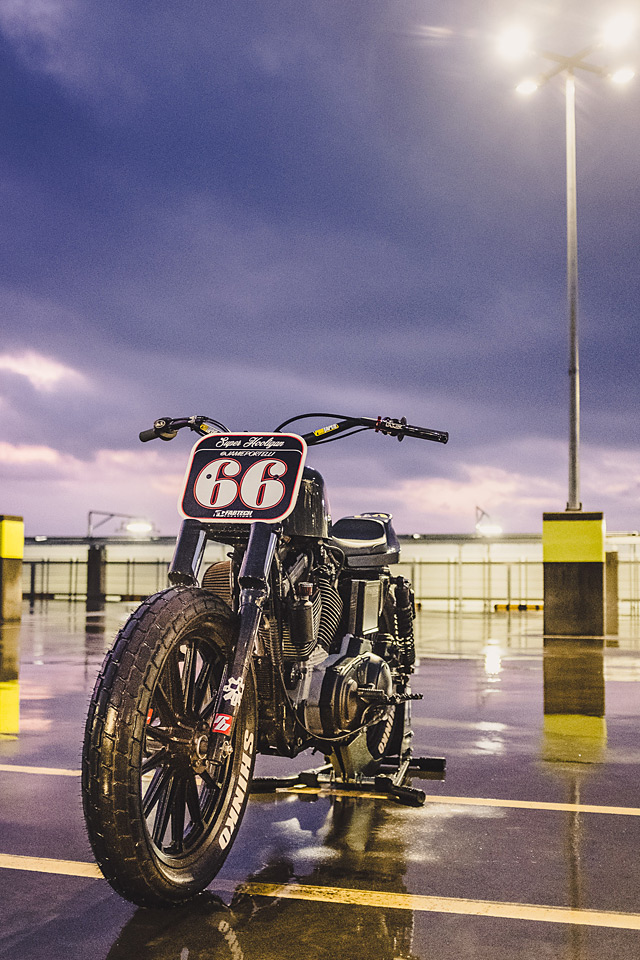 The first step was to get the basic look right and the rear subframe was quickly removed with the grinder fired into life. Atop the shortened section is a Saddlemen tracker tail and seat, while a peanut tank makes for the perfect match. But while weight reduction helps, taming the track largely rests on the suspensions shoulders with a heavy bike and Jamie has it dialled in. The rear end features a set of 14” Racing Bros “Bazooka” shocks, a well proven product for the Harley. 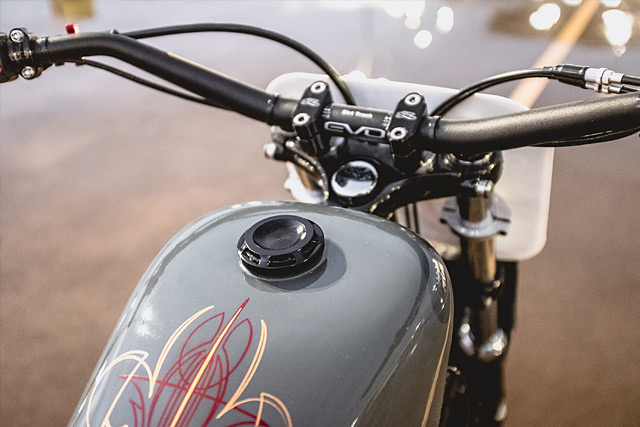 Pinstriping adds a nice custom feel to all that track attitude

Up front, the stock forks have been gutted with the new internals drastically improving front feel thanks to Racing Bros Scepter cartridge inserts. To mount up the Pro Taper flat track handlebars required solid mounts that Jamie machined in-house. To keep things simple he stuck to only the essentials, “Sticking to the dirt bike theme, I ran a similar style of start/stop switches”. While a custom-made clutch cable now takes its seat in a Works Connection clutch perch. And Jamie made his own throttle cables to work with the Motion Pro throttle assembly. 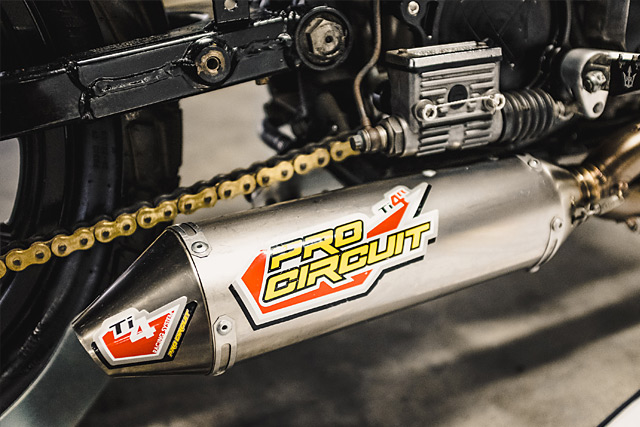 For a hooligan, this bike sure has good taste

Engine work is mild but brilliantly executed, a few extra horsepower and subtle touches to make sure it’ll go heats and win finals. A Fabtech machined intake adaptor features an internal bellmouth and allows for the fitment of an RSD air-filter. So the oil doesn’t vent back into the engine Jamie welded up a catch can that runs back to the tank and breathes through a K&N filter. While the exhaust is simply a work of art, purge welded stainless steel pipes and machined adaptors finish out in a barking mad “titanium Pro-Circuit pipe off one of the factory Pro-Circuit race bikes in the states.” 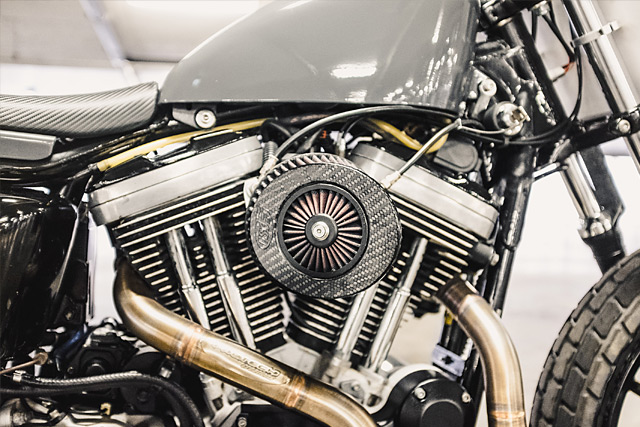 Now the bike could be stripped down and with the frame and associated parts out for powder coat we learn of another of Portelli’s skills. He laid down the stunning paint job himself, with a finish so nice it’s almost too good to see the dirt. While Smith Concepts added the last layer with the gold leaf and pinstripping, that includes his race number, replicated on the front board. To complete the look the Hooligan class runs a 19 inch front and rear wheel. So aluminium adaptors were machined that allow a front wheel to be mounted out back. 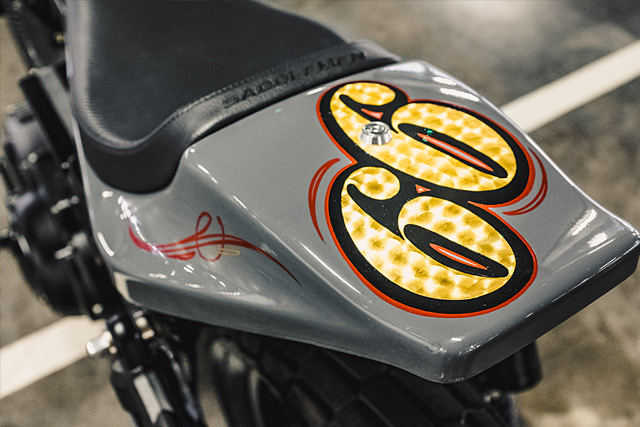 At this point Jamie treated the Harley to a chain conversion that’s complemented by a Rusty Butcher billet sprocket cover. While a set of Shinko’s flat track tyres and Hellride pegs from NZ finish out the build. “I don’t like the idea of bolting a bunch of off the shelf parts on my bikes, so to sit back and see that a lot of the build was done in-house is quite humbling,” Portelli tells us proudly. And when you can do this level of work its little wonder the likes of Robbie Maddison come calling. Now all that’s left to do is ride the #66 like the proper Super Hooligan that she is! 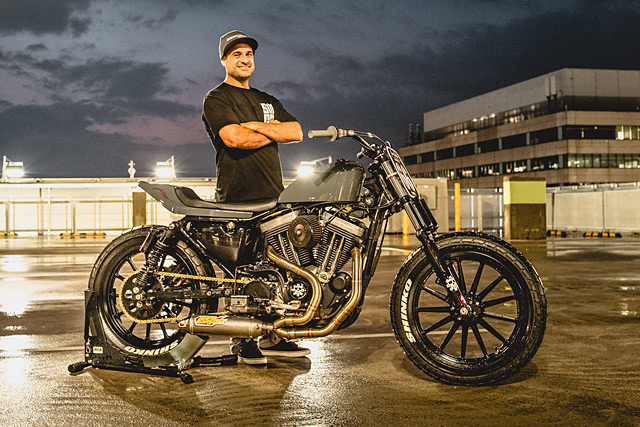 Jamie and one very wet Harley