It’s always the quiet and unassuming ones you have to keep an eye on, for years folks thought Ted Bundy was an average Joe. Not quite so lethal, although still the proverbial wolf in sheep’s clothing is the Honda Dominator, that enjoyed a 15 year production run. But to truly turn it into a killer you have to get its gear off and the NX650 has blossomed in the custom bike scene. So when a client approached Eastern Spirit Garage with a desire for a motocross-inspired build, head honcho Sylwester knew the Honda was the weapon for the job! 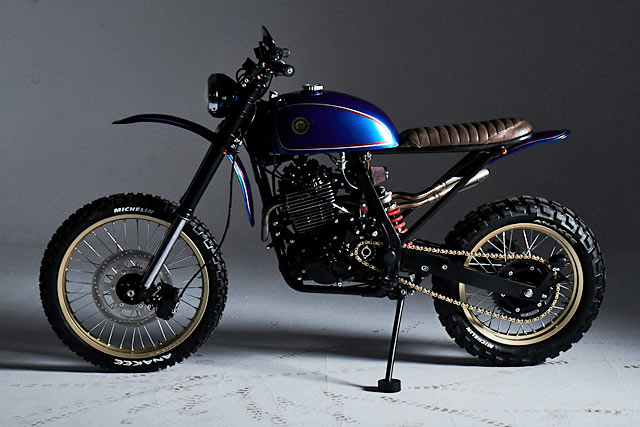 Sylwester has always had an eye for taking less than desirable machinery and turning them into something amazing and the Honda has all the vital ingredients. When it was launched it seemed it would always be just a relatively cheap ‘dual sport’, that wasn’t so great off-road and with looks that would date quickly. But the engines a ripper, weight is easily shed and the simplicity of it all has made it irresistible to customisers looking to leave their mark on the Domi. 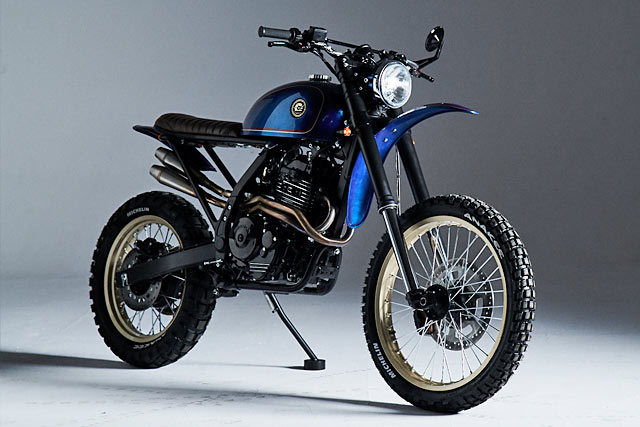 The whole process started with a bone stock and average condition 1996 Honda NX650 and the design was clear from the start. “The inspiration for this scrambler came from the client’s passion for motocross as we wanted to bring the essence of a motocross bike to the road. The client gave me a tremendous amount of freedom, though he participated in the choice of paint and disassembling the bike,” Sylwester tells us. 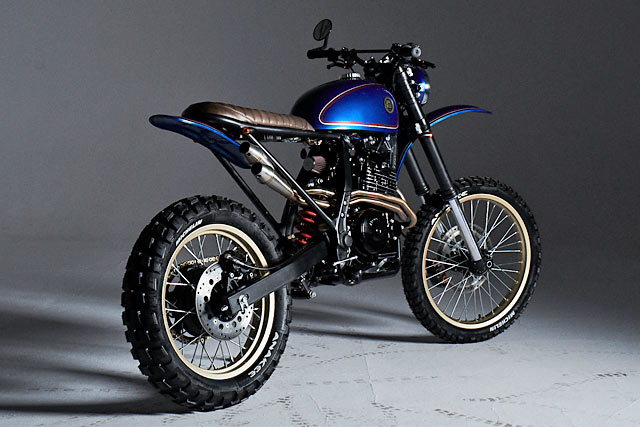 With the bike stripped back to a bare frame the cutting began, first to come off was the entire rear end. The swingarm and shock were removed and thrown in the scrap pile, while the subframe was cut back to the centre post. Based in Starawieś, Poland, the team at Eastern Spirit decided this was the perfect chance to pay tribute to a now defunct Polish company and modified an old SHL fuel tank to fit. The frame also required further modification to allow the smooth tank to sit low enough for their liking. “All of these parts were painted with a 7-layer paint job, usually reserved for high-end, flagship cars”

The final piece of chassis modification was to create a new subframe, perfectly executed with a neat hooped tail. Atop sits the sumptuous leather seat, in old school scrambler style, with plenty of room to move around on rough surfaces. But it’s the tins that really do the talking, with the Polish fuel tank matched up to a set of hand rolled guards front and rear. “All of these parts were painted with a 7-layer paint job, usually reserved for high-end, flagship cars,” Sylwester explains. And the deep blue with contrasting pin-stripping totally transforms the look of the budget Domi into a big dollar beauty. 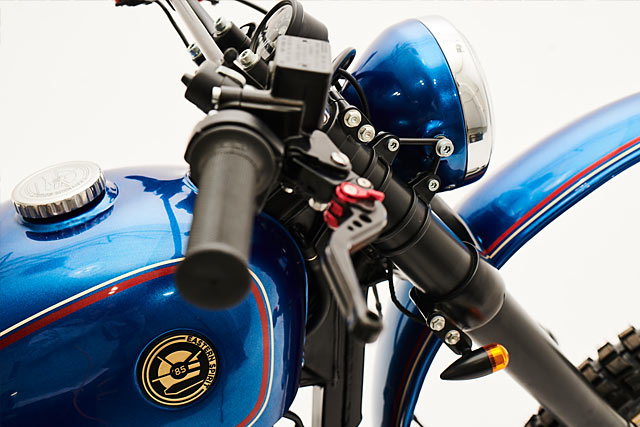 To turn the Honda into a rolling chassis, first a new longer swingarm had to be selected and the right bushings machined to make it fit. This was done to allow an 18 inch rim to be run at the back, more suited to on-road conditions while still maintaining the motocross look. While a new adjustable shock with custom mounts allows the bikes handling to be properly dialled in. Up front things are taken to the next level with the fitment of an unused set of forks from a 2008 Honda CRF 450. 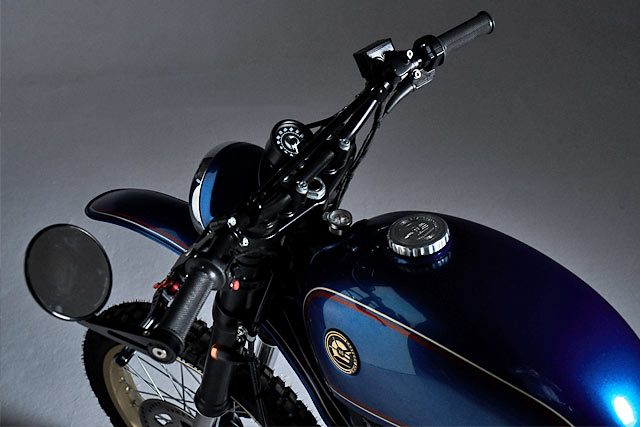 This meant the stock brakes were now greatly overshadowed and an upgrade was vital for the new speeds planned. The front set up is now taken from a Suzuki DR 800 Big, adapted to fit the CRF front end, with a massive 320mm rotor. While out back the improvements come in the way of a 250mm rotor, with adaptors allowing the stock caliper to still work. With new master cylinders at each end stopping is just a quick tap of the brakes away. To finish the roller the 21 inch front rim and new rear were wrapped up in Michelin Anakee rubber. 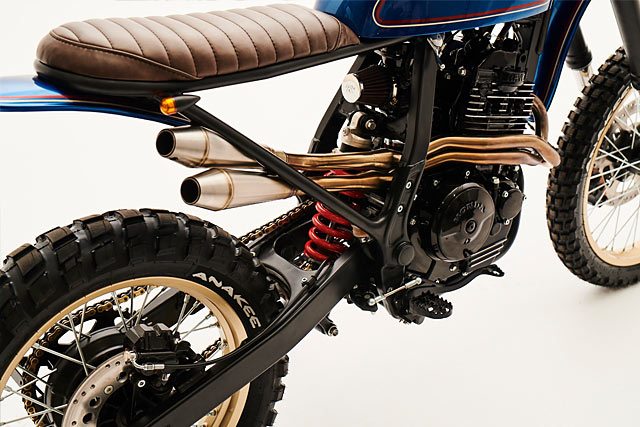 Now it was time to pull the engine and I don’t just mean from the frame, the whole thing was torn down to the last bolt. The transmission was disassembled and any worn parts replaced, with new gears going in to match. The cylinder was then bored 1mm over and honed before being fitted with a new forged slug and rings from ProX. The carb then got a full rebuild kit and clean before replacing the air box with a pod filter. Finally the whole engine was painted in a heat and chemical proof black, with small gold flake, and the cooling fins ground for contrast. 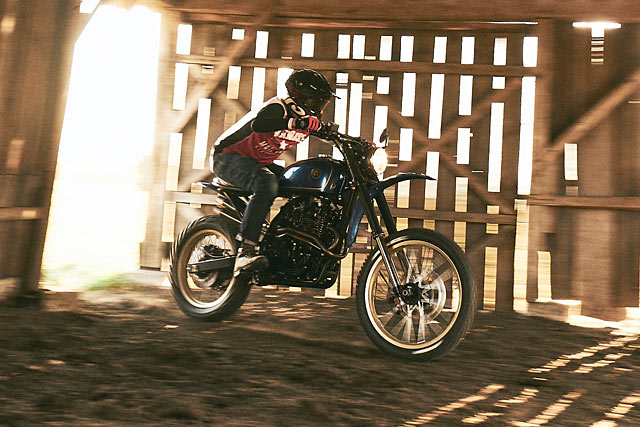 To finish out the build the new full exhaust system was designed to hug the bike tight and maintain the clean lines. Before the welder was fired up and the stunning full stainless system was fabricated and capped off with twin stainless mufflers exiting under the seat. The final product is a testament to Eastern Spirit Garage’s ability to decipher a client’s desires and bring them to life in the most fantastic of forms. And having retained the 21 inch front end and with the improvements made, including shedding 39kg of weight; this Dominator is ready to rip in up on and off the road and no doubt inspire more to choose the humble Honda as a donor for their next build.