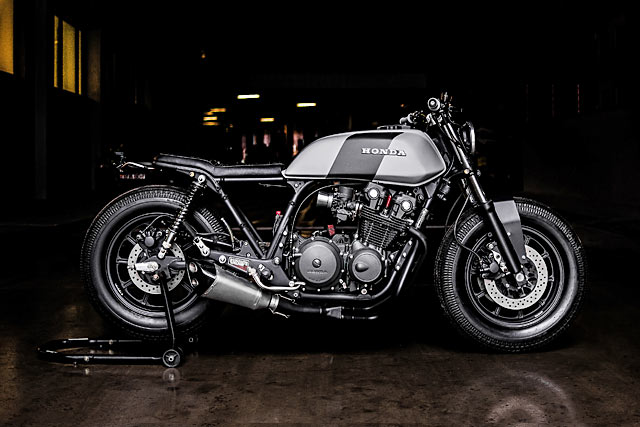 Some motorcycles perfectly reflect a time in history. And the early Honda Bol D’or is a prime example of it. All hard lines and pressed steel wheels, there’s something about it that screams late 70’s optimism and chest hair. But Belarus’ Recast Moto changed that, cutting, shutting and kicking it into a dark, modern roadster. 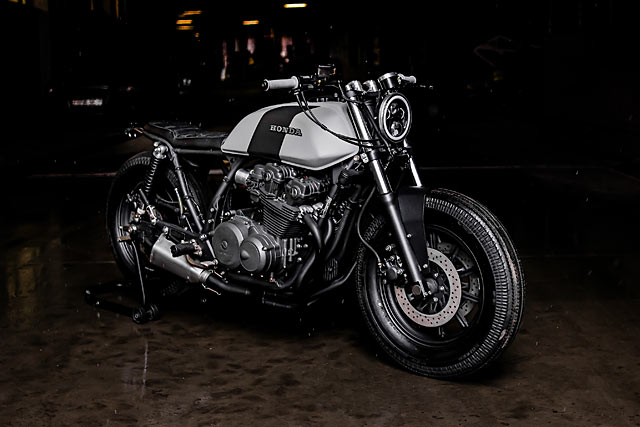 And it all happened by chance. “We visited our friends who bring bikes over from the Netherlands,” Recast’s Latiz Lemark recalls. “In a large hangar we found two motorcycles that interested us, one of which was the CB900 Bol D’or.” The team grabbed it and wheeled it onto a truck for a trip back to their workshop in Minsk. 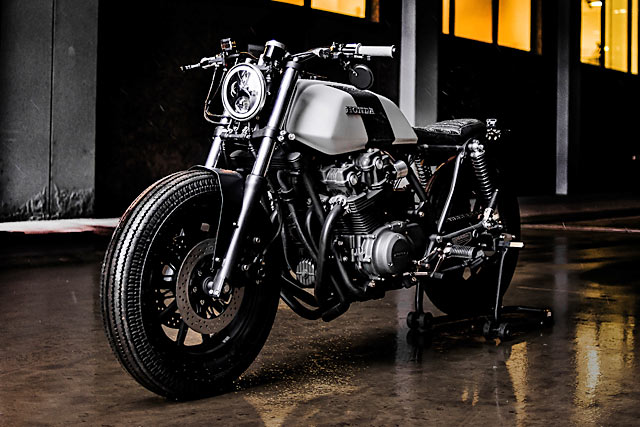 But the motorcycle was rough. “It was in poor condition,” Latiz says, “and it could only be push-started. Later, during the autopsy, it turned out the problem was the starting mechanism, bolts were broken and the whole system was unclamped.” But the problems didn’t end there. “Even when it started there were still some ‘extraneous’ sounds in the engine so we decided to disassemble it and check everything”. 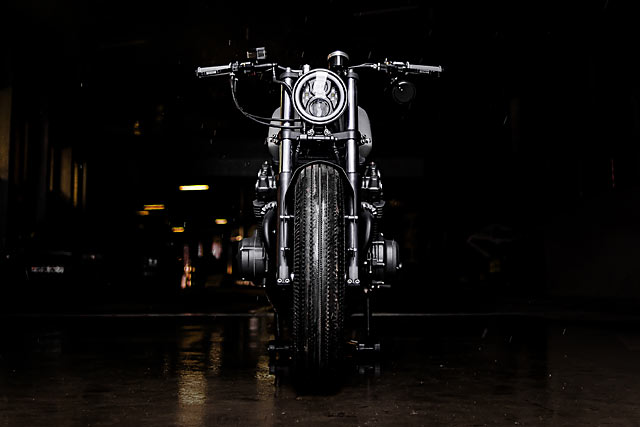 While the team was pulling their engine and hair apart, they began outlining their plans for the rest of the bike. Rather than come up with an overarching concept for the bike, Recast decided to let it develop organically with end goal in mind. That goal? A naked bike for the city that’s street-oriented, aggressive and stylish. 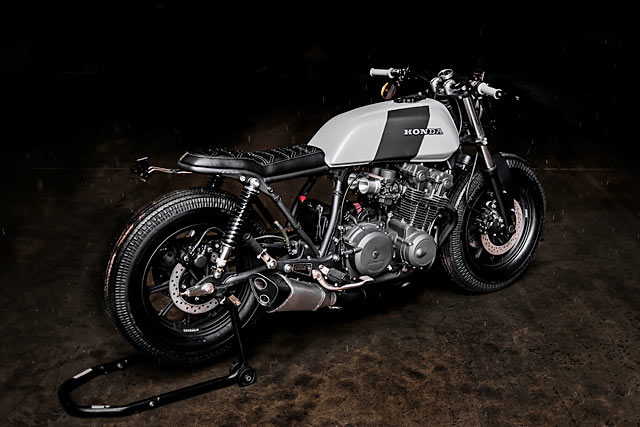 Angular can adds a touch of the modern

First to change was the wheels and suspension. The front forks and triple clamps were taken from a 2000 Kawasaki Ninja, dropping the front of the bike down a tad and offering the rider more adjustment. Then Latiz started pondering the rims. He wanted to ditch the standard stamped metal comstars for something a little more modern. He opted for 16 inch alloy rims, running wide retro Shinko tires. Further dragging the Bol D’or out of the late 70’s is the razor-sharp front guard made from stainless steel. 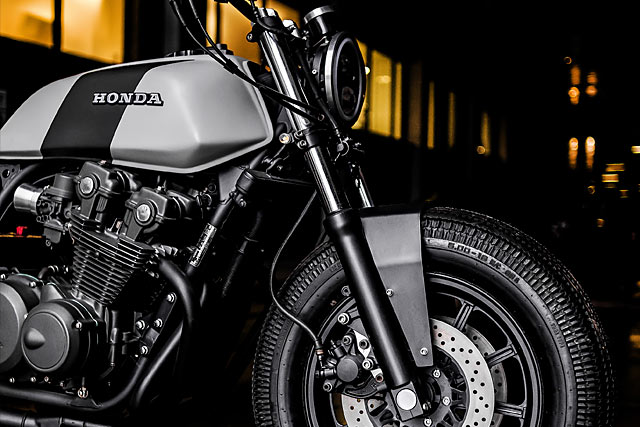 The Recast team were happy with the stock fuel tank, but in typical form, they decided it need a trim — based on a few mistakes they’d made before. “I was never happy with what we’ve done previously,” Latiz admits, “just painting over the lower part of the tank in black. It wasn’t very elegant.” So instead they cut off the lower portion of the tank and dropped it four centimeters closer to the engine. 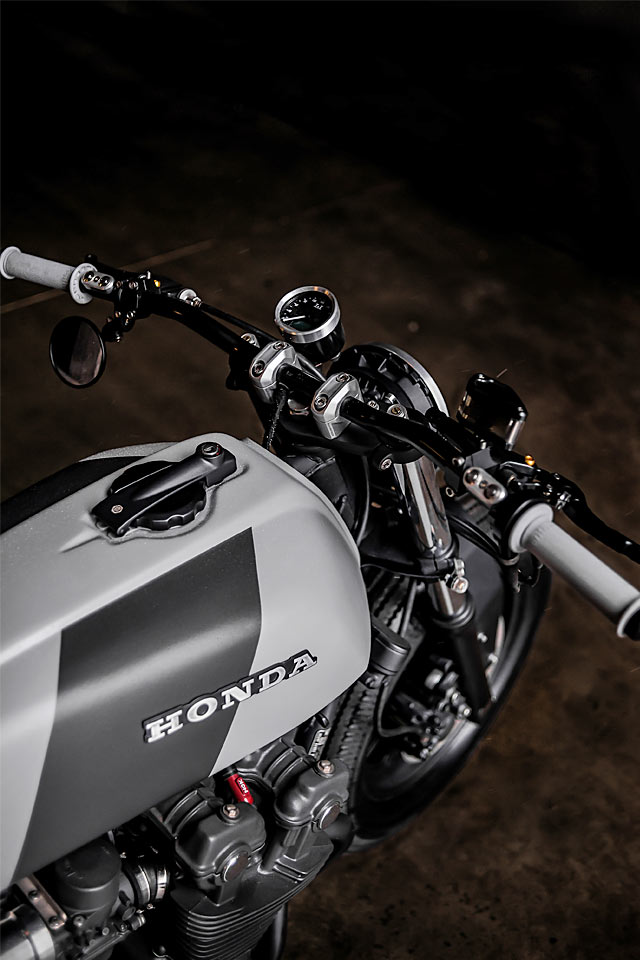 The attention to detail is obvious

The difference is surprising, giving the Bol D’or a more hardened, aggressive look and proving yet again that one and a half inches can make quite the difference. On top of the tank went a layer of gray satin acrylic and a wide stripe that matches the dark grey engine paint, all capped off by a new fuel cap finished in the Recast Moto logo.

“The difference is surprising, giving the Bol D’or a more hardened, aggressive look” 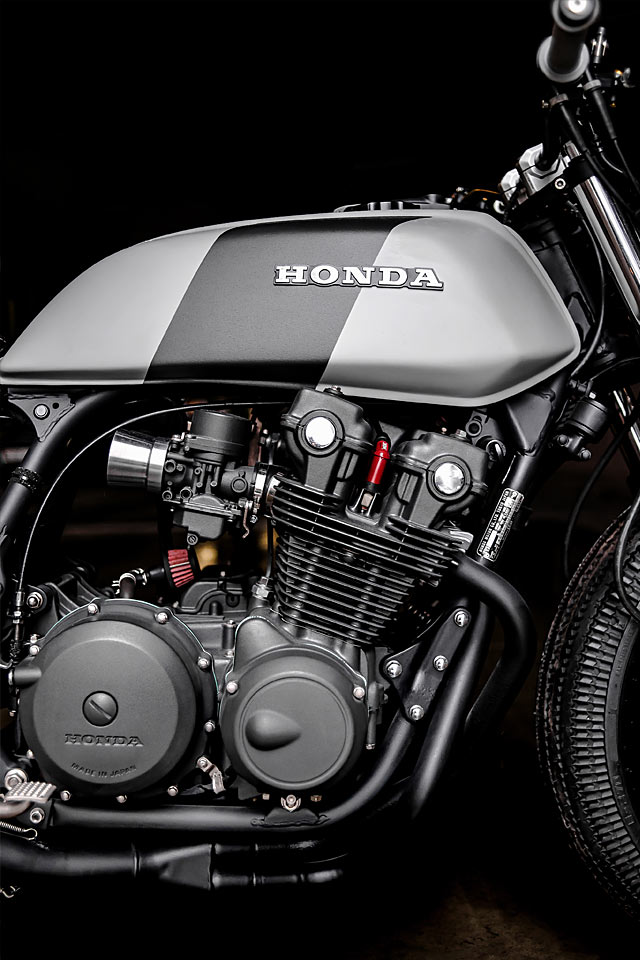 The exhaust system, which was in surprisingly good condition, also copped a Recast treatment from Latiz and the team. It was blasted and coated in matte black and fitted with a converted Yoshimura muffler, with the garish logo removed and mounting points adjusted. 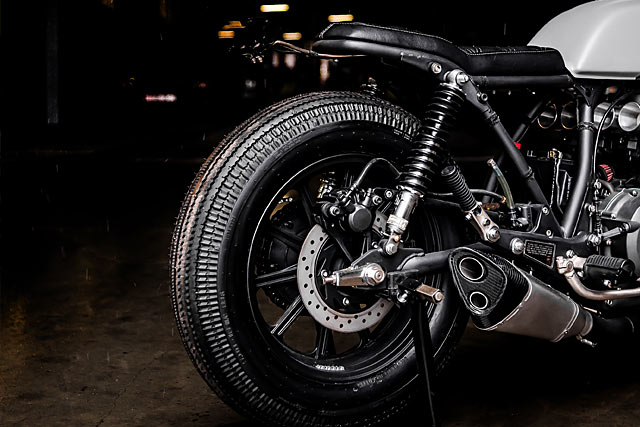 All that hard work and careful eye for design makes Recast’s Bol D’or one of the best 70’s roadster we’ve seen. There’s a hell of a lot of work — and we haven’t even touched on the frame modifications, scratch built LED headlight ring or air intakes — but it still manages to be one of the most cohesive-looking bikes to grace these pages in a long time. 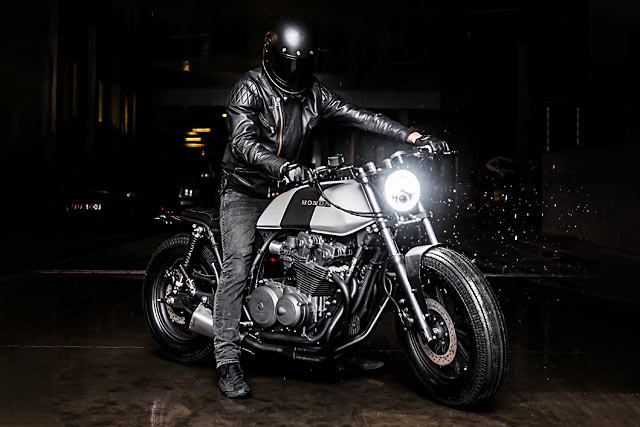