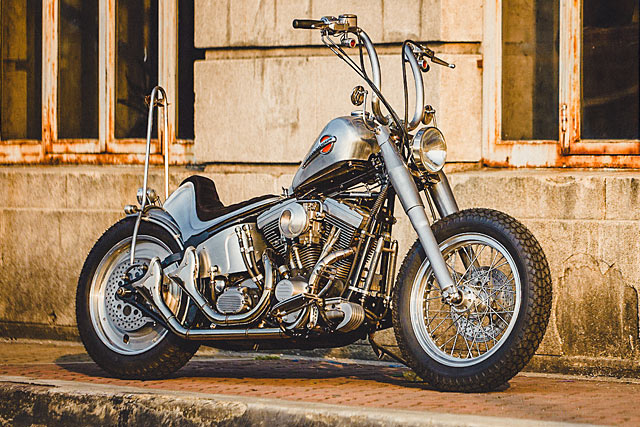 When the new wave of Japanese customs rocked up in the late noughties, it was like the 70-odd years of custom bike history before that point didn’t exist. We barged into the room  with our new-fangled cafe racers, brats and trackers and turned up our noses at pretty much anything that wasn’t ordained as that month’s hot new trend. But as many shops now ponder their 142nd cafe racer build, the trends that prevailed in the 70s, 80s and 90s are now being seen with new, more forgiving eyes. In that spirit, New Jersey’s BCR Designs set themselves a challenge; go back to the future with a classic Harley Softail bobber. Here’s the results. 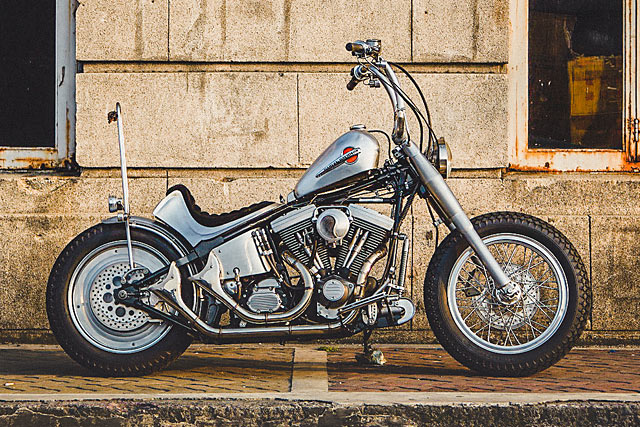 It’s clear that for some custom shops, it’s about quantity and throughput. For them, reproducibility is a good thing. But at Benjie’s Cafe Racers – aka BCR Designs – they believe that a proper custom bike shop should always be challenging themselves. “When we started the business, we mostly built cafe racers, scramblers and dirt track-style bikes,” says Benjie. “We were recently asked to build a bobber-style bike from a ‘97 Harley Softail Fatboy. Though bobbers aren’t part of the typical BCR style, we accepted the challenge and embraced a new frontier for us in design.”

“When we first received the bike, it was wearing some custom work from the early 2000s; it had bright orange and black paint with lots of chrome and some huge ape hanger handlebars. The owner – an avid rider – wanted something different from the usual bobber look. He wanted something he could ride without discomfort for both short and long rides. And clearly, he didn’t want subtle.” Cue team Benjie. 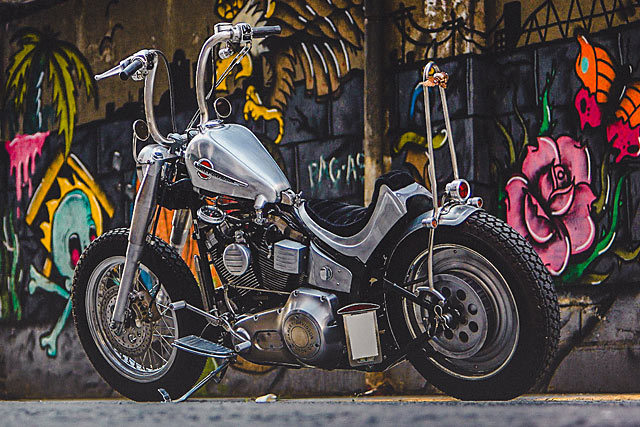 After stripping the bike to its bare frame and suspension, Benjie and the team started thinking big and throwing shapes. First item on the cardboard box list was the gas tank. “Along with the motor, the gas tank is the centerpiece of any motorcycle,” notes Benjie. “For this build, we wanted something small & narrow. We scrapped three different tank mock-ups before settling on a teardrop, peanut-style gas tank. Following the lines of the frame’s backbone, we mounted the tank on an angle while sticking with the stock Harley gas cap and adding some newer Softail OEM tank badges.” 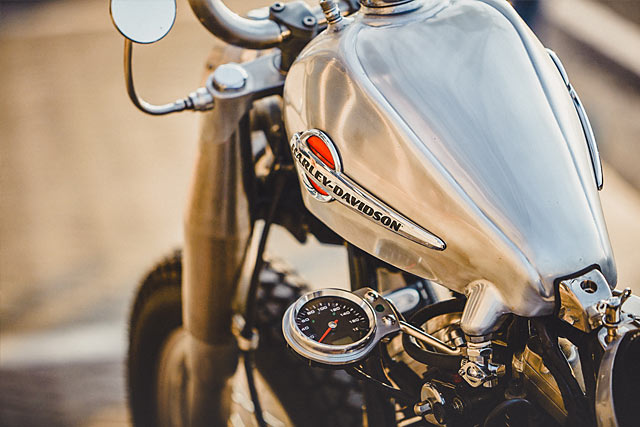 “Some brackets were fashioned out of stainless steel rods to make it look like the tail light was floating above the rear fender.”

Around the front of the Softy, Benjie got rid of the stock chrome shrouds and deftly fabbed up some stainless steel fork covers with a brushed finish. Unable to find a suitable headlight, signal lights, or a tail light that fit the build, they custom fabricated their own that perfectly suited the overall look and finish of the bike. “The headlight bucket and ring were made from scratch out of stainless steel and the back cover was made from aluminum.” For the signal lights, BCR wanted something small yet visible and they wanted the tail light just that little bit bigger. So some brackets were fashioned out of stainless steel rods to make it look like the tail light was floating above the rear fender. 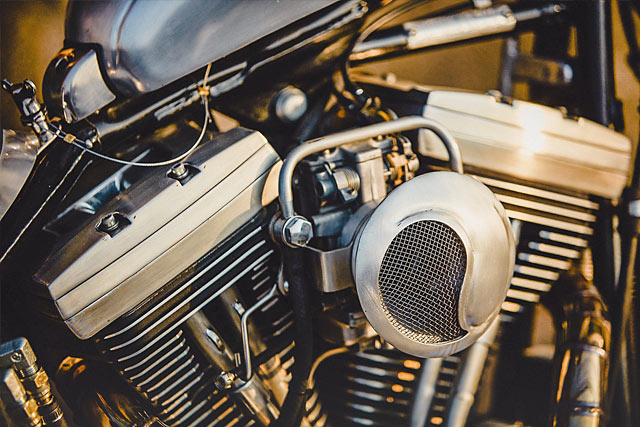 Zen and the art of motorcycle customisation

“For the seat, we wanted to avoid a conventional single that’s so commonly found on bobber-style bikes. We wanted something different and more comfortable. We styled the seat with a bump that blended nicely with the tank, providing a smooth shape into the rear fender. The seat bump was designed with the Mad Hatter in mind. It’s notched in the back to clear the rear fender when the suspension compresses and it has some added stainless steel trim details with beautifully ribbed black suede upholstery.” 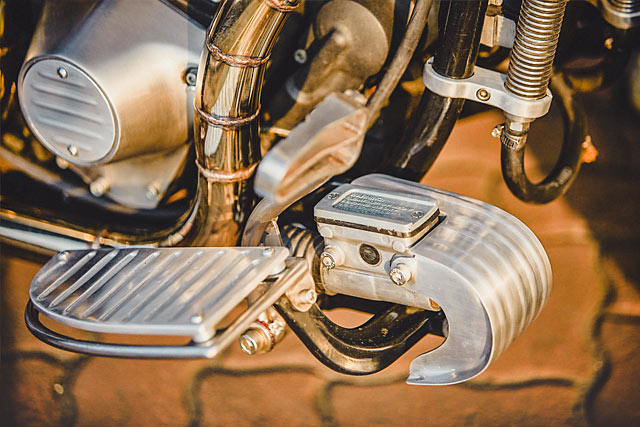 For the exhaust the owner wanted something a little, ahem, obnoxious. At least he was honest. “He wanted something that would stand out, something loud and something that complemented the rest of the bike’s design. So we made a 2 into 2 exhaust out of stainless steel with a segmented pie cut for additional detail and then fabricated twin fishtails with a ⅜ inch perforated enclosure to slightly dampen the sound of the exhaust.” The neighbours will thank Benjie later.

The final steps got the details all buttoned down. The all important oil tank was made out of mild steel with added aluminum side covers to match the gas tank and seat. The ignition switch was relocated to the side of the oil tank with exposed lines for some cool additional detailing. The foot controls, lever and floorboards were made out of stainless steel & aluminum, as was the rear fender. The final, crowning glory was the bike’s sissy bar – replete with a golden-winged skull. 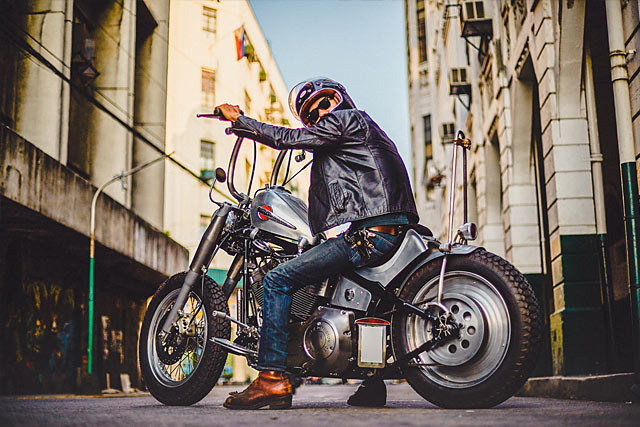 And there you have it. The bike was handed over and its new owner rode obnoxiously off into the East Coast sunset. Everything old is new again. Tomorrow will be like many moons ago. And the future for the classic bobber looks just a little bit like the Softail’s ape hangers: big, bold and very bloody comfortable. 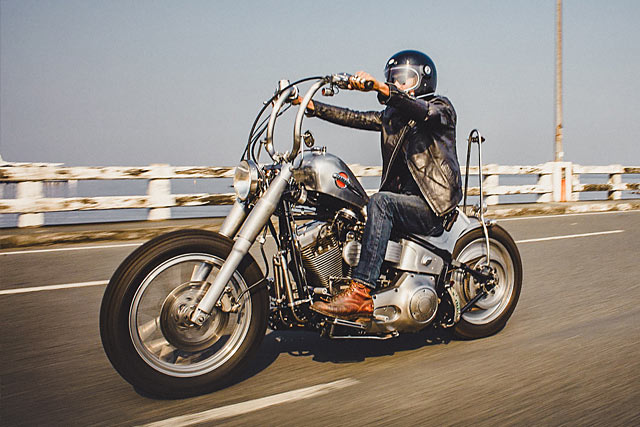