There is something incredibly satisfying about being right, and if you’re part of the cafe racer revival, then by default you are. Let me explain; in the 1990s some Japanese manufacturers were already selling retro remakes and industry experts thought this to be insane. One major magazine opined forcefully that on the release of the 1994 Kawasaki Zephyr 750 the company would have been better building a Harley cruiser clone. Now more than twenty years on Germany’s Mellow Motorcycles have taken that exact model and turned it into a stunning Neo-Cafe machine, proving the retro warriors are still winning. 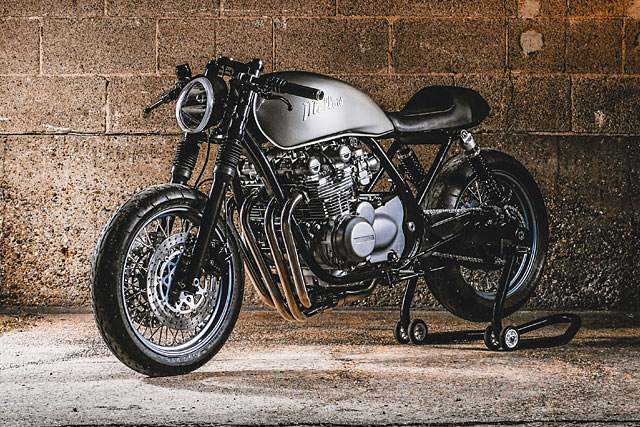 You’d think the fact the Zephyr was a sell out success would have had said scribes conceding defeat. But it wasn’t until the full retro revival took off that brings us all here together today that they finally accepted the error of their ways. Call me crazy but I never took much convincing to see that stunning classic lines, low weight and rideability was a better way to go than a 500 lb luxobarge. It’s a view shared by Flo Hubert who created Mellow Motorcycles to express his deep and long-lasting passion for classic motorcycles and cars. 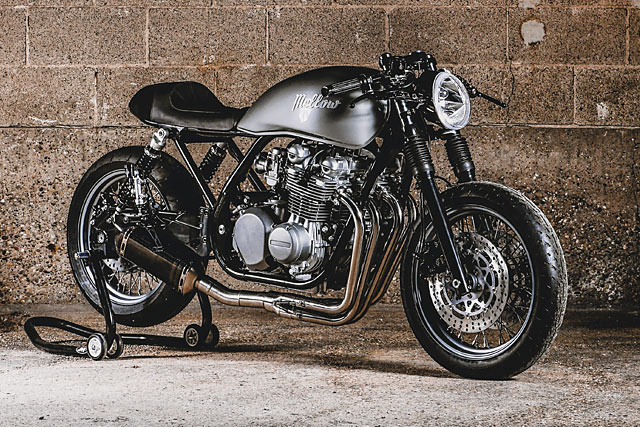 “Opened in early 2016, Mellow Motorcycles have already made a name for ourselves by creating unique, award & race winning custom bikes that collectors, celebrities, enthusiasts and motorcycle companies have become the proud owners of,” he tell us. But rather than go searching for a donor bike for their next project the Kawasaki literally rolled into the shop when the owner came for a coffee. With the Zephyr only showing 8000 miles on the odometer it was the perfect canvas, “Our aim was to build a Neo Cafe Racer and put some modern influences to an old motorcycle,” explains Flo. 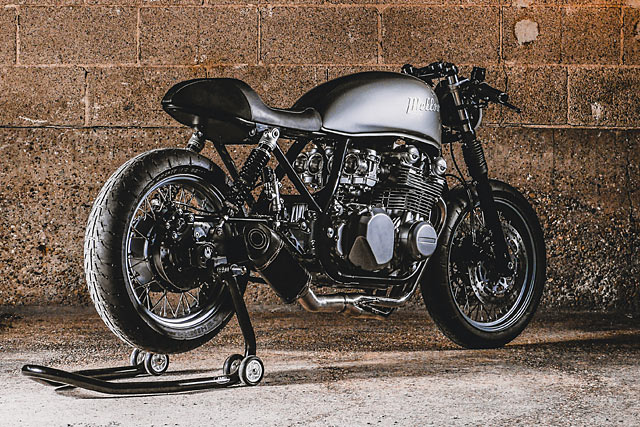 But one of the problems with customising this particular Kwaka is not revealed until you take her clothes off, and it’s here that many have given up. Where the tank ends the frame kicks sharply down before resuming its journey reward. On a custom this destroys the clean lines all are trying to achieve, so there was only one thing for it. The angle grinder was fired into life and the entire rear section of the bike including the subframe was cut off. A hand-built rear chassis was then entirely fabricated in house before being welded to the frame at an equal height to the backbone.

“But one of the problems with customising this particular Kwaka is not revealed until you take her clothes off, and it’s here that many have given up.” 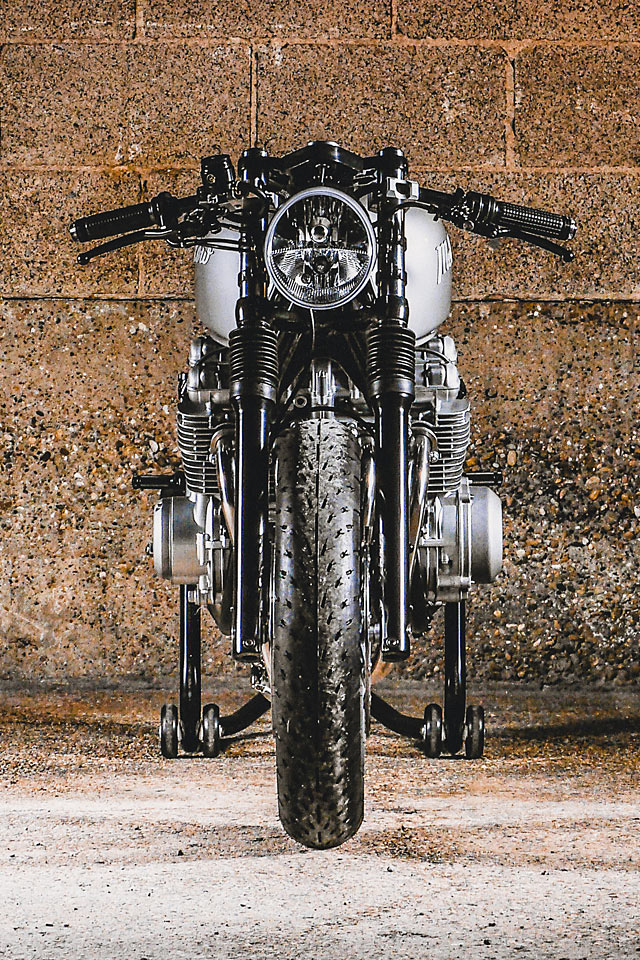 Further transforming the chassis was the idea to ditch the standard swingarm, with the replacement plucked from a Zephyr 1100. Measuring 55mm over, it along with the new frame construction gives the bike a longer, leaner look. All of which is accentuated by the beautifully prepared factory fuel tank that’s had a pop-up style filler welded into place. Along with the modern headlight’s bucket, the tank is the only other piece painted on the bike, finished out in resplendent grey pearl magic. With added class coming from the two-tone Alcantara and leather seat by Tailor Leathers, another of Flo’s companies. 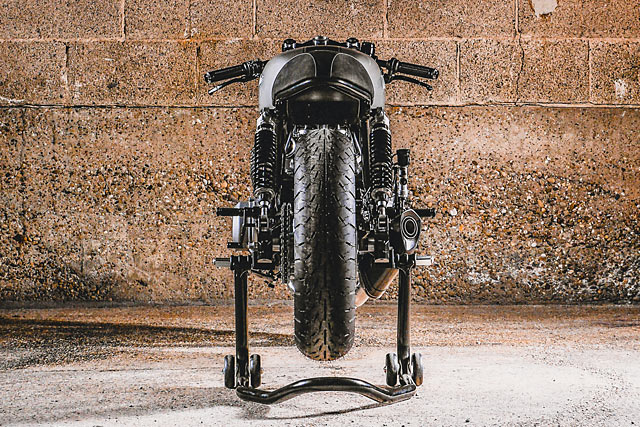 With the top half of the bike looking so good, something had to be done about the less than attractive three spoke mag wheels. New hubs allow for a set of 17 inch rims to be used front and rear, with stainless spokes providing the strength. These are wrapped in sticky Shinko rubber, with the tread pattern looking like sticks of dynamite the crew now had a name for the bike; the C4 Zephyr! The big twin 300mm discs provide plenty of stopping power swinging from lowered forks. While out back new fully adjustable progressive shocks allow the bike to be tuned for the rider. 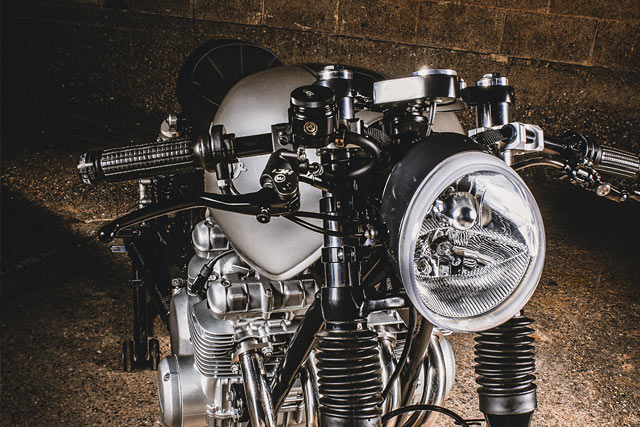 Despite the low miles on the always dependable Kawasaki air-cooled 738cc donk, Mellow decided it should still be treated to a full overhaul. Every part was pulled down, checked to make sure it was still in spec and the engine rebuilt with all new seals and gaskets. The cylinder head has been flowed on the inlet and exhaust side and is now supplied fuel via a bank of new Keihin carbs with stunning locally machined velocity stacks. Finishing off the mechanicals is a full stainless exhaust system venting out via a weight saving carbon Akrapovic muffler. 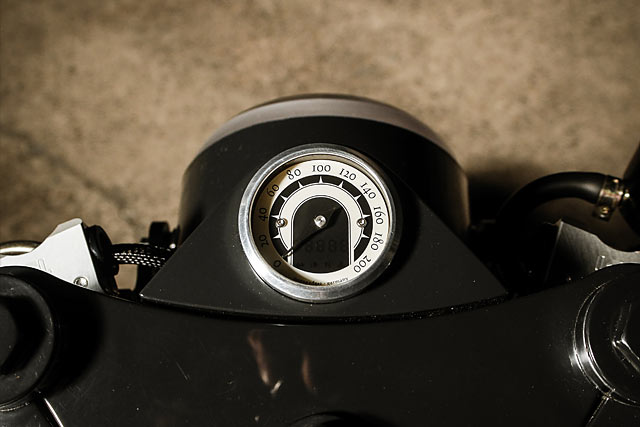 To keep everything neat and tidy the Kwaka has been given a totally new wiring loom based around Motogadget’s m-unit. The popular companies products complete the electronics package with a stunning mst vintage speedo fitted to the modified upper triple clamp. While the LSL clip-on bars sport new grips, switch gear and bar end indicators all from the big M. With the brake and clutch controls a combination of Magura, Brembo and LSL ensuring wherever you look on the Zephyr there’s quality. 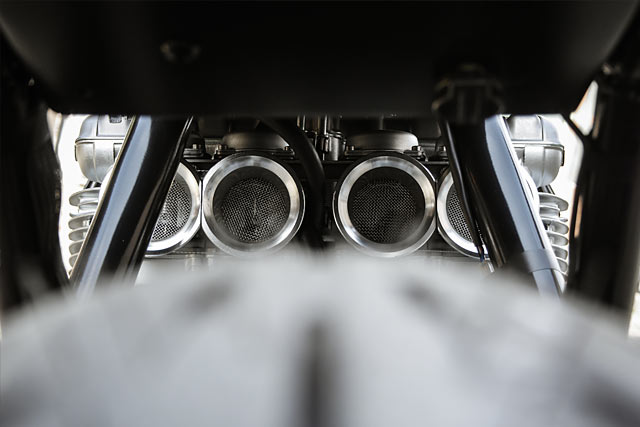 To finish out the build Flo wanted to give the bike an aggressive riding position to make the most of all the go fast bits. So a set of ABM rearsets have been adapted to fit, being mounted considerably further back to get you tucked in and ready to roar. Which is exactly the sound that emanates from the Akra pipe when the throttle is cracked and C4 Zephyr is fired like a missile down the streets of Southern Germany. If those old school scribes still think a cruiser clone is better, then they don’t deserve the explosive entertainment you get from owning some Mellow Motorcycles C4! 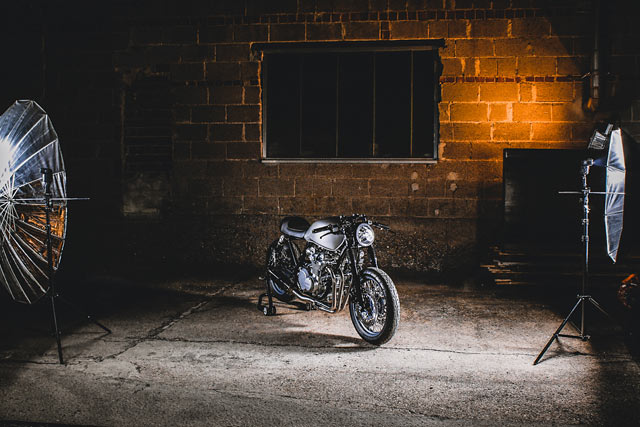