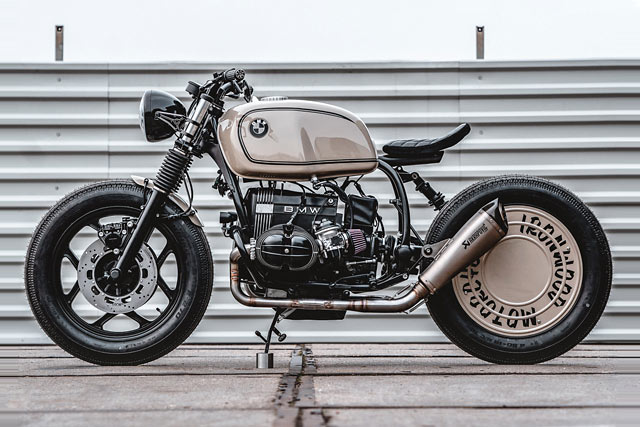 Since 2012, Dutch shop Ironwood Motorcycles have pretty much dominated the classic BMW custom market in Western Europe. So much so, that their style has pretty much become shorthand for an entire genre of custom Beemers. And while many may have copied, it’s their ability to break the mould and think outside the square of their own fame that proves they’ve still got what it takes. Like this ‘85 BMW R80 bobber, for instance. Just like a old-school southern haircut, it’s classic at the front, but with a nice little party out back. 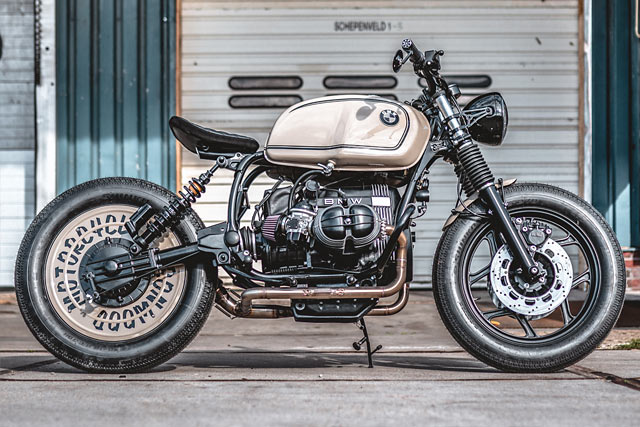 “It’s a bobber,” begins Ironwood Motorcycles’ boss, the impressively named Arjan Van Den Boom. “A bobber, but with a cruiser look & feel. Then again, it’s called ‘The Latte’ because I was toying with cafe racer and coffee ideas in my head. I guess you could say it’s a bike that’s had a dash of hot steamed milk.” No, we’re not quite sure what he’s talking about, either. A lesser man would make a joke about Amsterdam cafés right about now, but any bike that’s got both cafe racer and Star Wars influences has to be a very good thing, no? 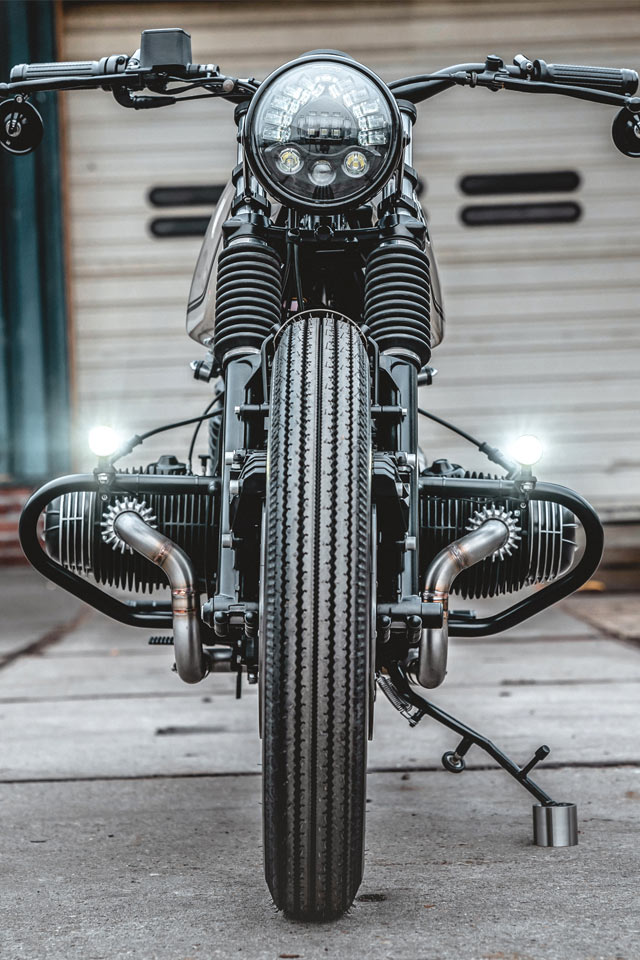 Mr Boom went into detail about how Ironwood’s range of bikes work. “We now have two Ironwood bike series: one is called ‘The Deathtstar Series’, and is based on R80 and R100 twin-shock bobbers with chunky tires. The second is ‘The Stormtrooper Series’, featuring R80 monoshocks with a higher stance and sporting vintage compound rubber.” Got it. But what’s a ‘Latte Stormtrooper, then? “It’s a Stormtrooper on steroids,” chuckles Arjan. It sounds a lot like an upcoming J.J. Abrams Star Wars Franchise piece; think Darth Vader meets Rocky Balboa. 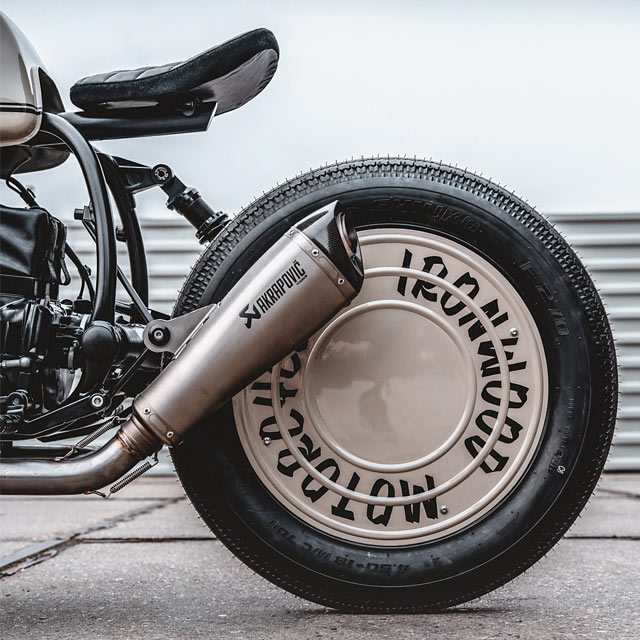 Put the needle on the record… 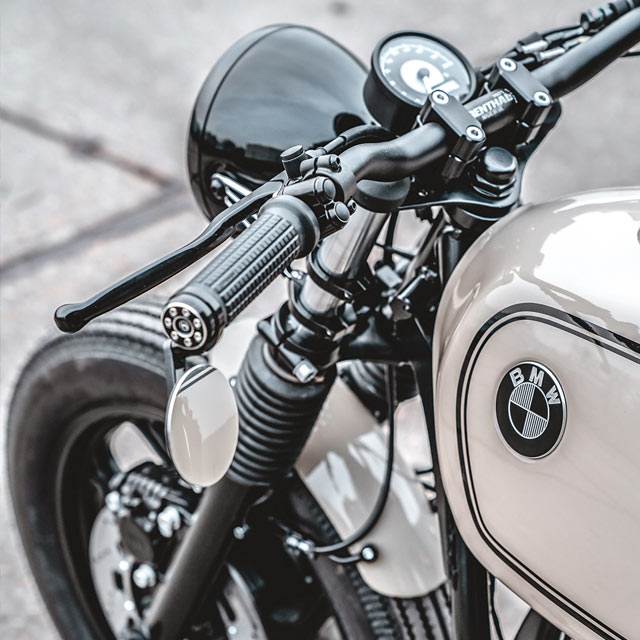 The bike was sourced from Arjan’s go-to powder coater; he’d purchased the donor R80 and started some customising work on it before the project ground to a halt. If we had a dollar… Arjan saw a chance for another shop-funded flagship build and pulled the trigger. “Finally, an open brief build in between our ongoing customer jobs,” he says. “Most of what we do is base on vintage BMWs, so we wanted it to be something a little different, but still recognizable as an ‘Ironwood style’ BMW.”

Loving the look of covered rear wheels for years, Arjan decided it was his turn to have a go. “To make it ours, we applied some flanges on the aluminum discs to give it a unique look and applied some Ironwood branding to the finished items.” Next, stance was handled by chopping 60mm off the fork tubes and replacing the rear suspension with a fresh YSS shock. The ’bars were upgraded to a Renthal Fatbar and stocked with Motone controls and some Motogadget mirrors and grips. “Inside, we replaced the piston rings and clutch before the painted engine got married back into the powder coated frame. The welded seat tube provides a nice, upright seating position together with the floating bobber seat. To let the motorcycle breath, we’ve equipped it with custom piping and a beefy BMW R nineT Akrapovic muffler which was mounted upswept.” 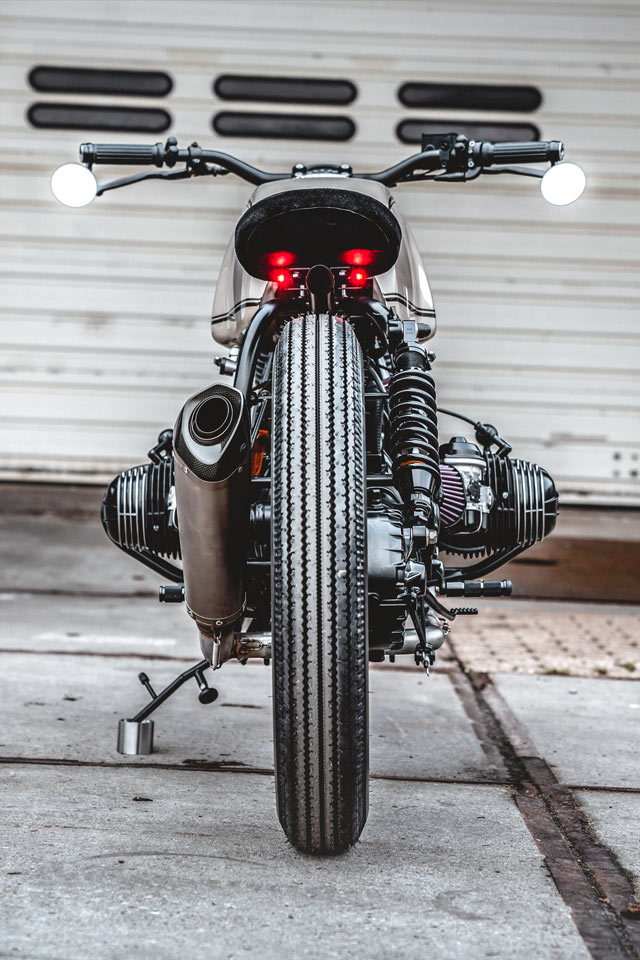 Like cocoa powder on a good coffee, the almost complete bike was finished off with a 7″ LED headlight and matching running lights with integrated blinkers on both crash bars and two Kellermann Atto DF lights underneath the seat providing understated looks with ultimate visibility on the road. Shinko E270 classic rubber with sawtooth tread connect the bike to the floor and a Miller Kustom Upholstery seat does the opposite for your butt cheeks. Finally, many coats of Audi Mocha Latte were laid down by Jacco from Royal Kustom Works. It’s not a colour you’d usually gravitate to when thumbing through a swatch book, but boy does the end result look the business. 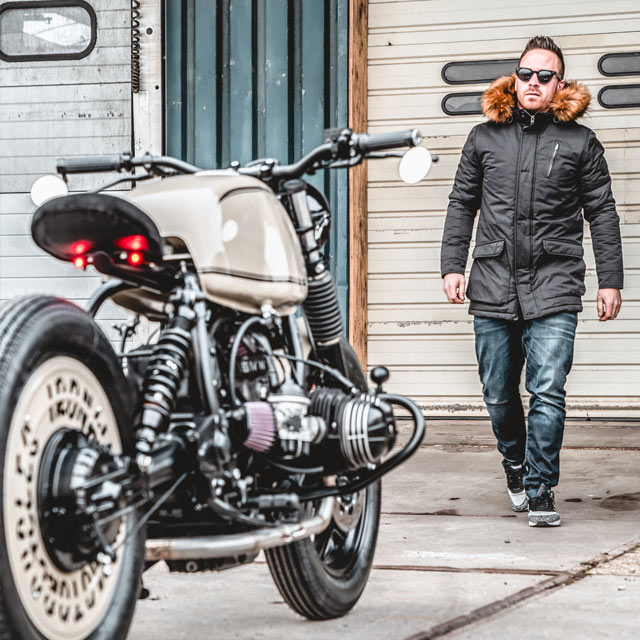 Arjan said the rear wheel disc and exhaust was shaping up to be the build’s biggest challenge until good friend and metal worker Marcel from The Custom Factory stepped up to lend a helping hand, fabbing up the aforementioned pieces according to Boom’s exacting specifications. Turns out, these are also Arjan’s favourite pieces. “The wheel discs with our brand name on them look fantastic. And the muscular BMW R nineT muffler provides the airhead with a tough, muscular appearance.” Darth would be proud. 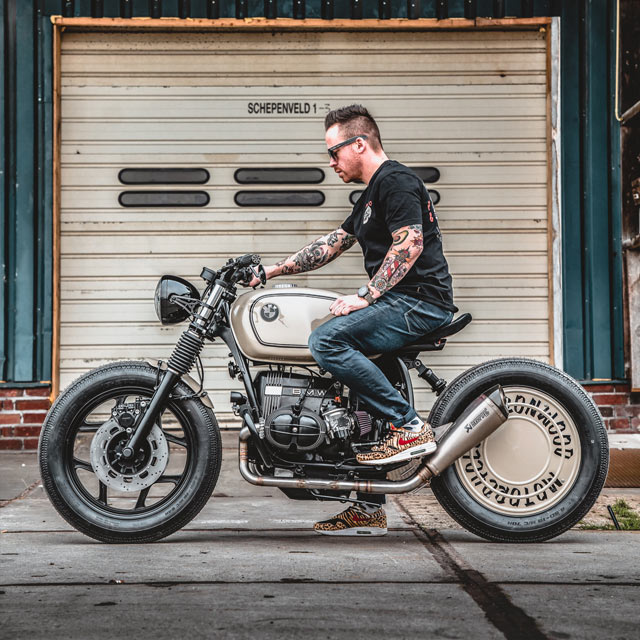