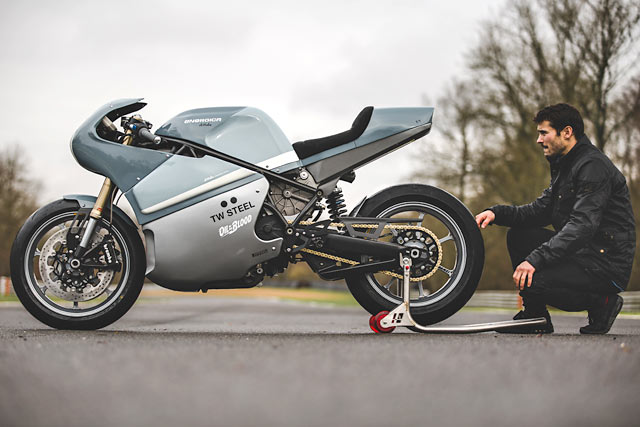 What’s better than a movie about motorcycles? If you answered, ‘A movie about custom motorcycles,” then you win the internets for today. Luckily for all of us, Englishman Gareth Roberts is way ahead of the curve. He’s been banging away on a rather epic project for the past three years he’s calling ‘Oil in the Blood’. And unlike those little YouTube ditties we’re all so used to, this one’s a proper cinema release that’s less MTV music video and more Gone With The Wind. Clocking in at 119 minutes, it feels a lot like this will be the film you’ll show your grandkids in 30 years time while trying to explain what you did with your life. And taking centre stage is Calum Pryce-Tidd from South London’s deBolex Engineering. We spoke to him about his back catalogue, the film and why he built an electric racer. 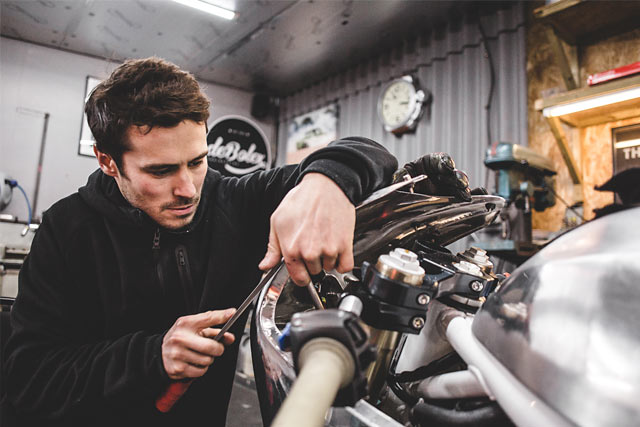 Excluding all this Hollywood stuff, what’s been happening with deBolex lately?

Prior to building the new bike for the movie, we were just settling into a Kawasaki ZRX1200R project; the Oil in the Blood bike squeezed itself in for seven weeks and now we are playing catch up! The Kawasaki will be the last (for the time being) of our one-on-one projects, as we are preparing a new venture which will enable us to produce motorcycles at a much quicker rate and more competitive cost. 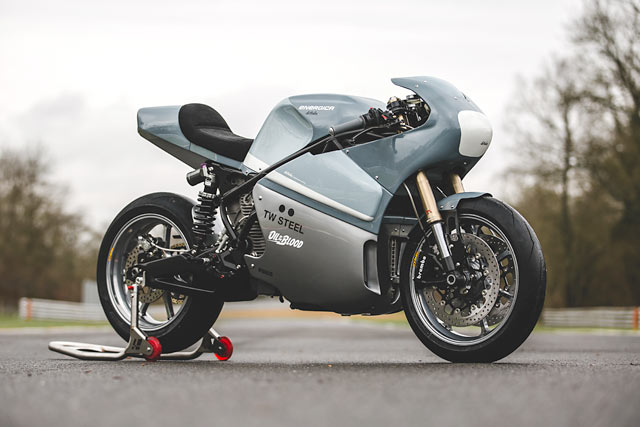 deBolex’s custom Energica Eva that was built for the film

How’d you meet Gareth, the director?

I think I first met Gareth at one of the early Bike Shed events. Gareth was quite heavily involved in The Bike Shed then and it became clear he had a huge passion for motorcycles. Since then we’ve become close friends: we’ve built him a bike, we’ve collaborated on this recent Energica project and I’ve even become godfather to his son, Atticus. 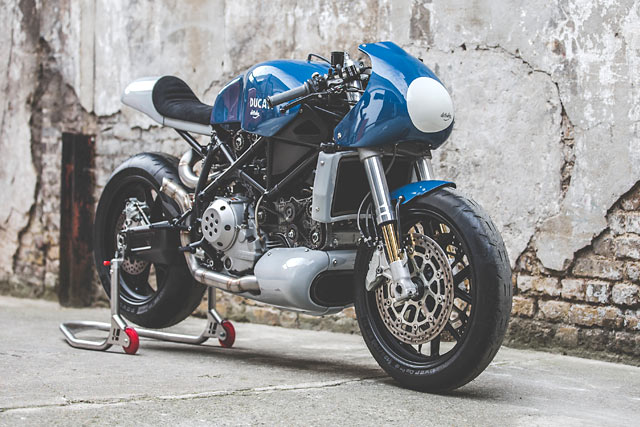 Which deBolex bikes are in the film?

Our Ducati 749s, Triumph Thruxton R and Buell XB9 all feature in the film. The 749s was shot with owner Gerry Harrison while Gareth was in France filming his collection, which consists of some really interesting machines from the likes of Max Hazan and Shinya Kimura. The bike features bespoke aluminium body work, a custom rear subframe, an Alcantara seat, Maxton rear shocks and custom stainless exhaust.

The Buell XB9 was shot around my local roads using Gareth’s Ural sidecar camera rig. It was a really fun shoot and the bike is a blast to ride around the country roads. It was built for Todd Keplarski. It has aluminium body work, a stainless steel exhaust, an Alcantara and vinyl seat, Dymag carbon wheels, a Ducati Panigale front end conversion, custom yokes, a K&N filter, Motogadget lights and a Maxton rear shock.

The Thruxton was part of some footage we filmed at the Goodwood motor circuit and was built for Prince Mateen of Brunei. It’s got full aluminium body work, an Alcantara seat, a custom wiring loom and ECU, a quick shifter, Motogadget lights and speedo, Maxton fork cartridges and rear shocks, Magura HC3 brake and clutch master cylinders with a hydraulic clutch conversion, Excel rims with stainless steel spokes and Metzeler tyres. 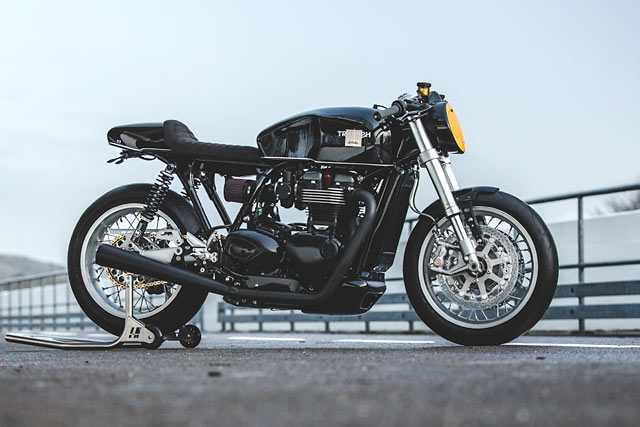 Tell us more about your electric bike that appears in the film?

It’s based on the Energica Eva. It’s an Italian-manufactured electric street fighter with a range of 125 miles, a top speed of 125mph and 200nm of torque. For us, this was the perfect platform to build our first electric custom. We took the same approach to the Eva as we do with all our custom projects; that is to strip it back to a bare frame and power plant, upgrade the suspension, wheels, brakes and various other components, then build it back up with our bespoke aluminium body work.

Working on an electric bike certainly had its challenges, mainly with the large battery and charger unit. We spent a lot of time sketching and working on lines to help reduce the width around the battery and to give the fairing a very tailored design. Other nice features include Dymag UP7X wheels, a Maxton rear shock, a Magura brake master and Pirelli tyres. 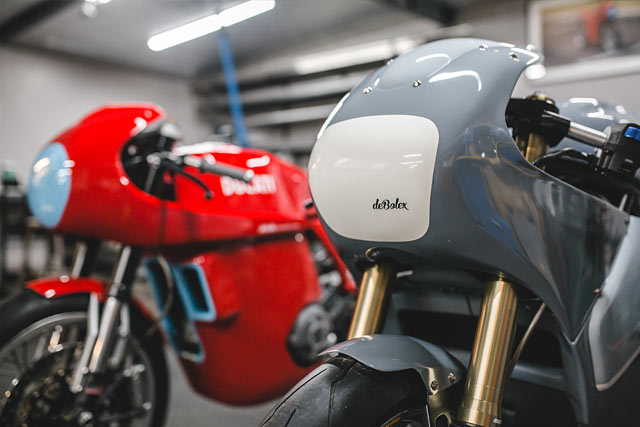 What are your thoughts on the future of electric bikes?

I love electric bikes. There are too many benefits not to love electric bikes: high torque figures, lower running costs, more racing, motocross and enduro useability due to a lack of noise pollution, the ability to configure different riding characteristics… the list goes on and on. I understand people’s gripes with them. I don’t see them as a replacement for my noisy, oil-leaking MV but rather as a welcome addition and one we are looking forward to working on more. 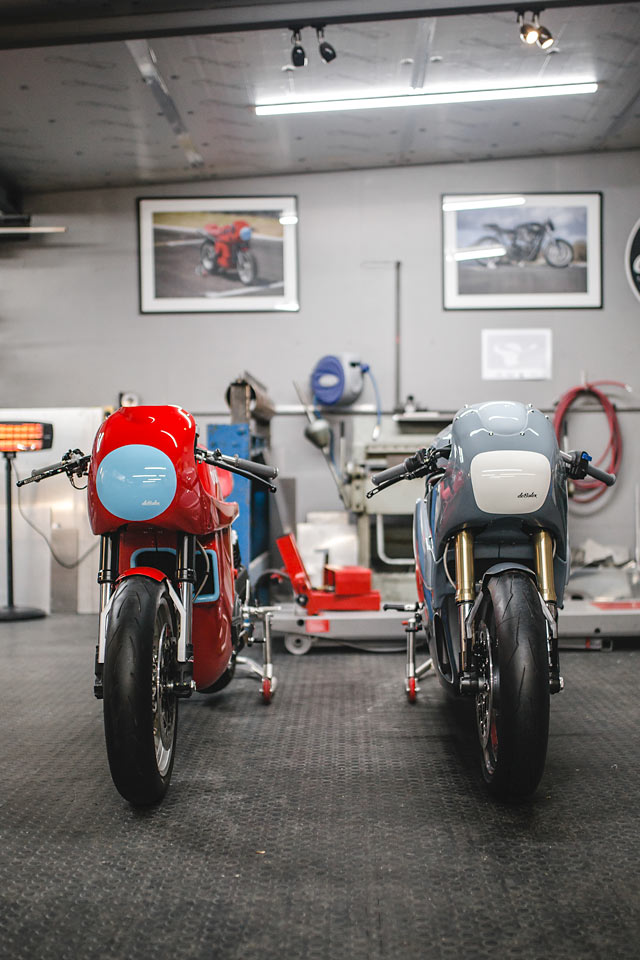 How did watchmaker TW Steel help out?

TW Steel have been involved with a number of custom bike projects and it’s great to work with a company that understands and supports custom builders. We had some great meetings with Auke from TW prior to starting the project, but the general feel was he wanted us to have total freedom and build the bike we wanted to build, which is the path we always prefer to take. So, it was great to work with them and a great opportunity for us to get creative around an electric platform. 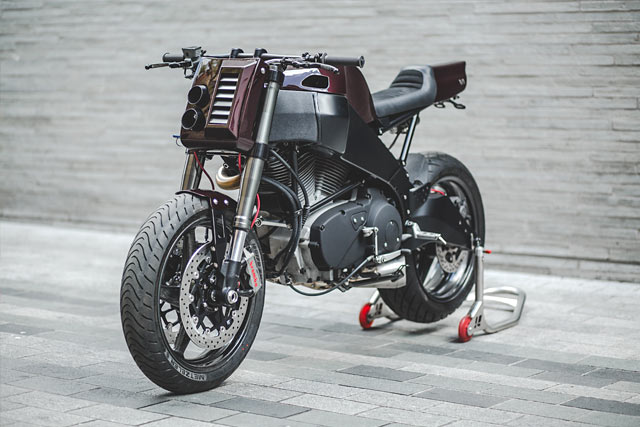 Were there any other deBolex bikes that missed out on a starring role?

Plenty! There’s our Yamaha XJR1300 that was built for Gareth himself. The bike features a 3-in-1 tail with single seat, dual seat and luggage rack configurations to create a really tough yet practical custom. There’s also an MV front end conversion, Kineo Wheels, another Motogadget speedo and two Ohlins rear shocks. 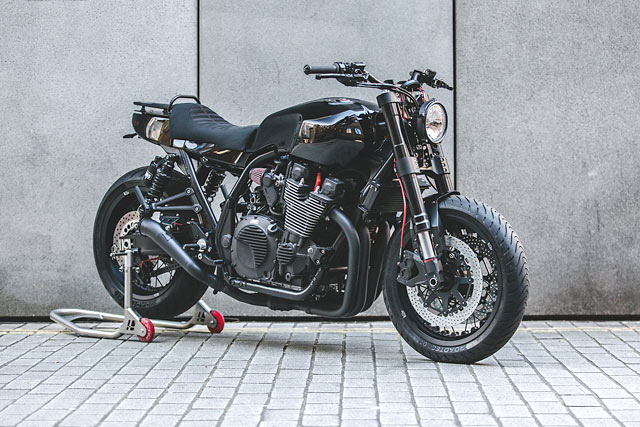 The deBolex XJR previously built for the film’s director, Gareth

Then there’s our Ducati 803. It’s now owned by Simeon, who’s a London collector, and it’s based on the Scrambler Ducati. It features more aluminium bodywork, a Maxton rear shock, a bright red Alcantara seat, Excel rims with stainless spokes and some sporty Metzeler tyres. 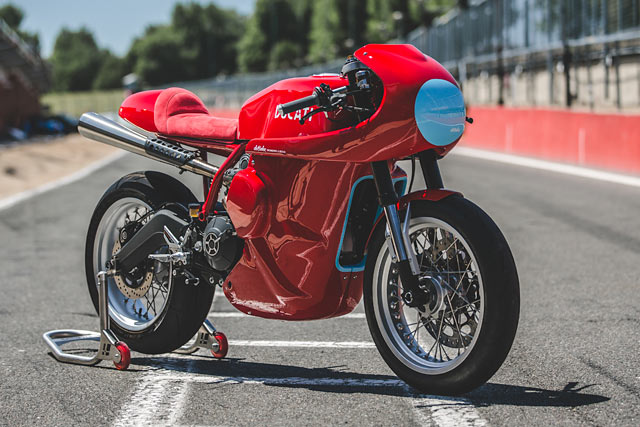 Finally, I would have loved to shoot our Ducati 1100. It was built for Ducati UK; they asked us to put a cafe racer spin on their new 1100 Scrambler. Yes, there’s more aluminium body work and another Alcantara seat. But there’s also a lovely HP Corse silencer, some Rizoma rearsets and a bespoke top yoke. 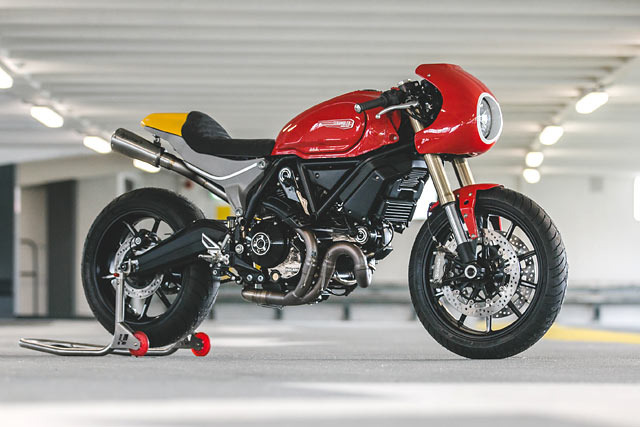 What’s your primary motivation for getting involved with the film?

I knew this wasn’t going to be just a quick video to flash up on our screens and that Gareth was putting a lot of time into really capturing what has been going on in the custom motorcycle world for the past 5 years. So to work with Gareth and TW Steel to produce a motorcycle to help market the film was an honour. 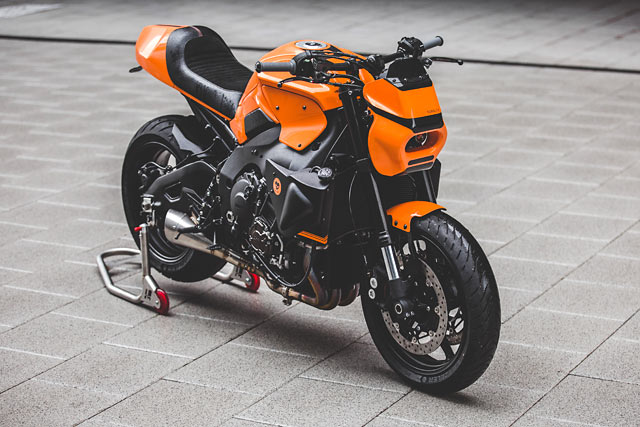 The deBolex blockbuster before the Eva was this Yamaha MT10

Now that you’ve seen the film, what did you think of it?

The film is great. It features all the top names in custom motorcycles from all over Europe and USA and as a builder, it’s interesting to hear other builder’s triumphs and struggles and relate them to my own experiences. 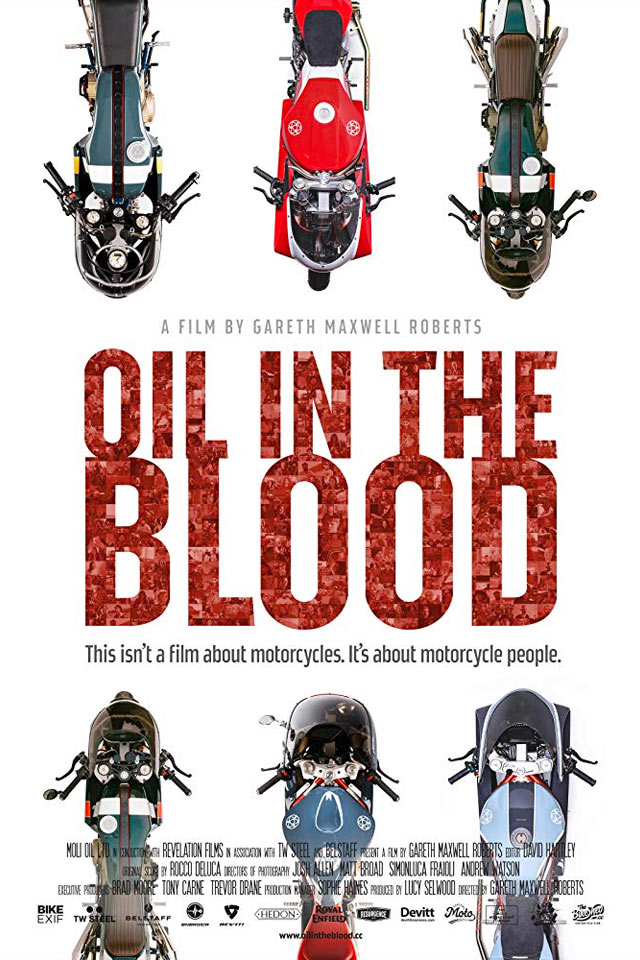 It’s the Kawasaki ZRX1200R I mentioned; it will mark a turning point for us as after it’s done, we will begin to develop a limited series of bikes based on the Ducati 1200 Monster. We want to make our bikes available in a quicker time frame and with a more competitive cost while keeping quality and design our number one priority.

We will be producing a prototype using the same traditional techniques as our one-on-one projects with the hand-shaped aluminium panels. We will then turn these panels into moulds to produce duplicates out of carbon kevlar. When ordering a bike, there will be options for bespoke paint, trim, wheels, brakes, tyres, and exhaust to name a few. We want to formalise what we have learnt building one-offs for the past 8 years and bring this together in a neat package that creates not only a great bike, but a great buying and owning experience.