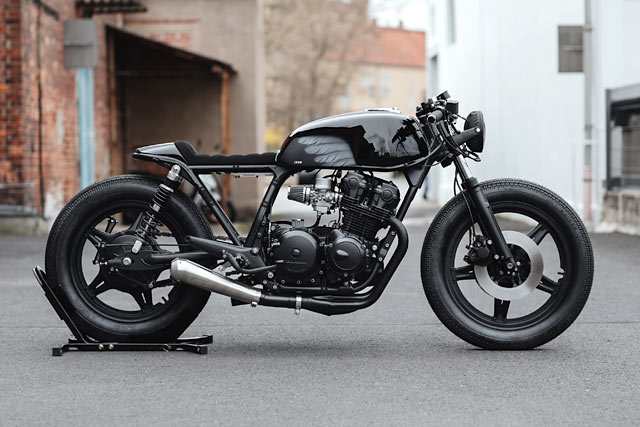 In just about every ancient culture that spans the globe exists a mythology around the crow, and it almost always leads to death and destruction. So imagine yourself sitting alone in the middle of the night, stopped at a red light in the bad part of town, when as if from nowhere this blacked out harbinger of death rolls up beside you. Lean, mean and snarling through its pipes, comes this blacked-out beast from Dresden’s Hookie Co. A ’91 Honda CB750 that’ll drag you down the road and rip your eyeballs from your skull, this ‘Crow’ is ready to ask, for whom the bell tolls… 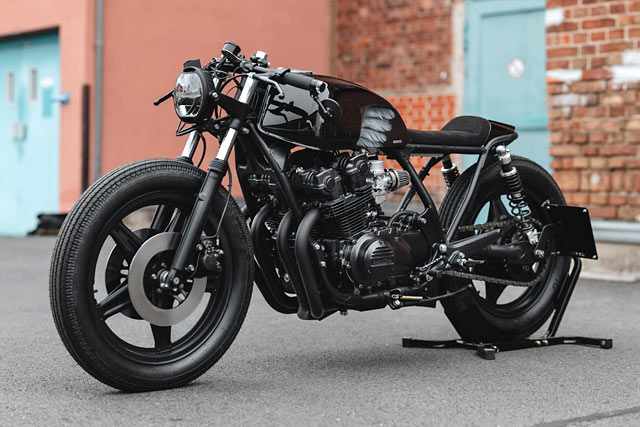 But that’s where the dark and disturbing part of this story ends for now. Walk into Hookie Co. and you’re greeted by owners Nico Mueller and Sylvia Petrasch, who surrounded by incredible custom bikes will offer you the perfect coffee from the in-house cafe, a beautiful couch to sit on and even the password for the WiFi. Think of it as Starbucks for the motorcycle lover, except the coffee is perfect, you’re served with a smile and a chat about their latest tyre shredding ideas – so really nothing like Starbucks at all. 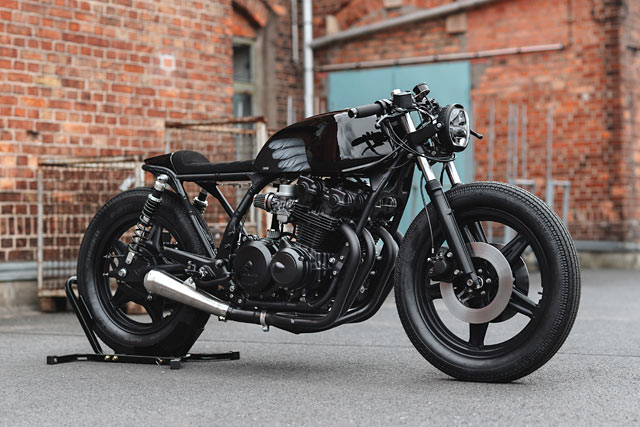 But the cafe is just to create a nice environment and keep everyone smiling, the bread and butter is bikes and a new project needed to be found. What Nico stumbled across while searching the internet was a 1981 Honda CB750, perfect given Hookie’s in-house catalogue of parts they produce for the model. The only problem was the Honda was a wreck, it also didn’t run as the engine was a total basket case and it looked as ugly as sin with someone having given it their own Salvador Dali version of a makeover. 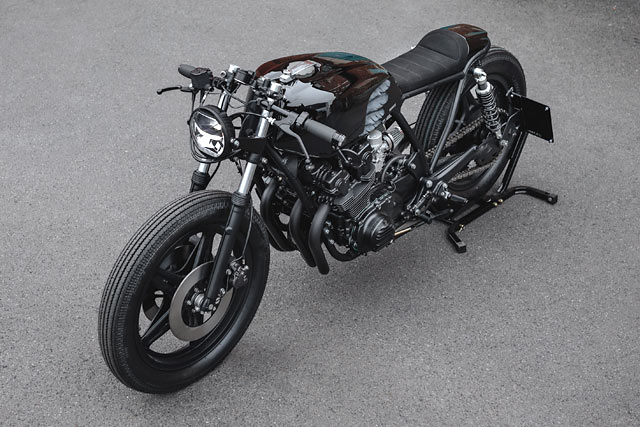 But for the talented team from Dresden this was never a concern, no bike leaves their shop without a complete and thorough health check, so it was up on to the operating table and down to work. The engine was pulled from the Honda and set aside, before every other part is disassembled, inspected and marked for later use. “After that part I go straight to the fab time and modify the frame, tank and tail,” Nico explains. Every weld on the frame is checked, re-done if necessary, with excess tabs removed and the whole thing smoothed out. 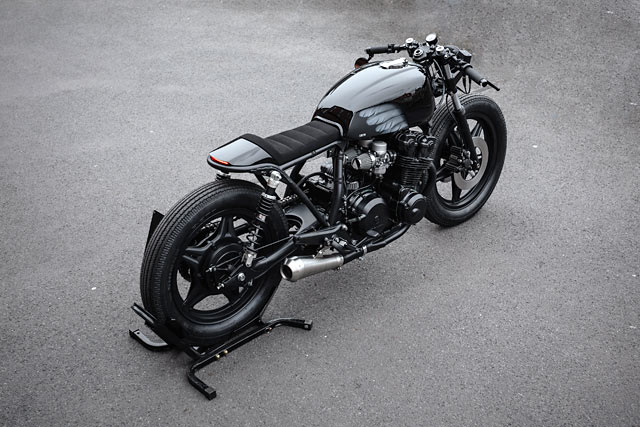 Next the tank is attacked with the grinder as Hookie like to give a more flowing effect to the otherwise boxy item. Subtle changes give the Honda unit a more rounded appearance, with soft transitions to the knee dents and the side mounts removed. Working further back the entire subframe is cut off and an all new item shaped to suit. From the centre post back, it’s all handcrafted, clean straight lines create a crisp finish and the tail is given an up kick and rounded off to finish. 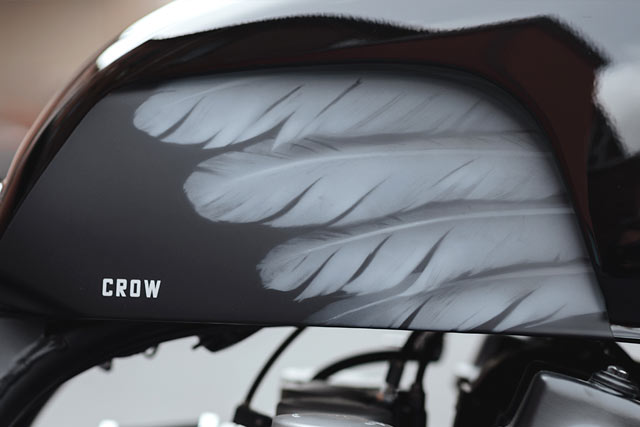 Now the team can go to their in-house supply of off the shelf parts they create for the Honda CB750 market; with a new kit also on the way for the BMW R nineT. You can either buy it piece by piece or as a kit and of course Nico threw the lot at this build. Hookie’s own electronics tray, rear loop, battery box and stunning ‘hawk tail’ rear cowl all get the call up and bolted into place. With the fabrication work complete the bike is once again broken down and parts sent out to paint and powder, while the mechanicals get an overhaul. 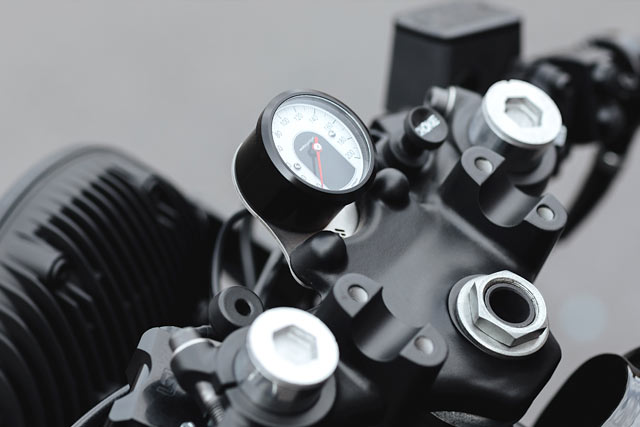 To make a perfect runner from the old wreck, the engine has been broken down to every last nut and bolt and given a full rebuild. Blacked out cases, barrels and heads swing a new set of slugs with a gasket and seal kit returning things to new. The full bank of rebuilt Keihin carbs bolt up with new mounts and draw air from the atmosphere via a set of pod filters. But the real roar comes from the Spark Performance exhaust that Hookie favour for its genuine horsepower boost. 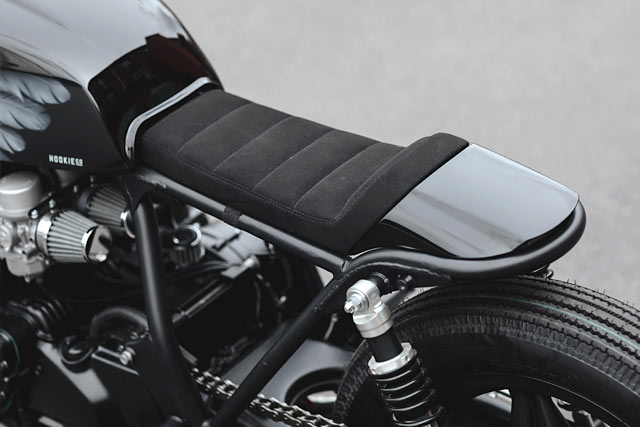 With the big jobs complete the final assembly begins by turning the Honda into a rolling chassis and rebuilt factory forks are slotted into the trees. The wiring loom is run down the back bone and through the new clip-ons that allow for Motogadget switchgear and bar end indicators to fire to life. A classic styled headlight with flush fit LED gives the symmetry of old with a much cleaner look while the analog Motoscope speedo is all class. At the rear things are kept simple and sleek with a single LED light assembly and Progressive shocks for the perfect ride. 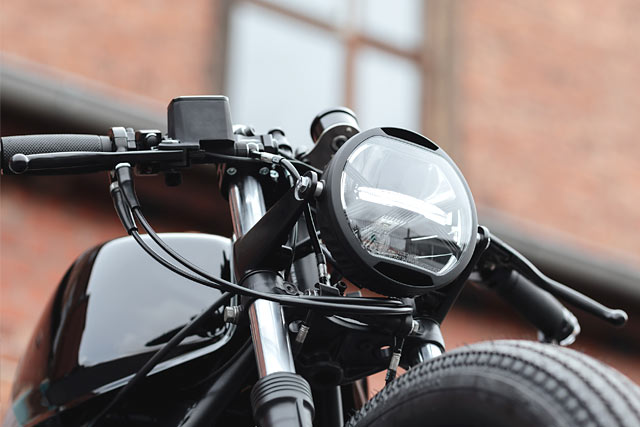 “The gloss black paint requires you look closely to truly appreciate, while the subtle details in the feathers come from a true artist’s touch.”

But it’s the final pieces to the puzzle that really catch the eye. The depth and quality of the gloss black paint requires you look closely to truly appreciate, while the subtle details in the feathers come from a true artist’s touch. The same quality paint work goes on the rear cowl, with flat black powder on the rest of the metal and more black on the seat with the Porsche grade Alcantara. Nico and the team couldn’t be happier with the end result and in case you think you’re safe in that bad part of town, the new owner is a rather large chap covered in ‘Crow’ tattoos… the bells toll for thee! 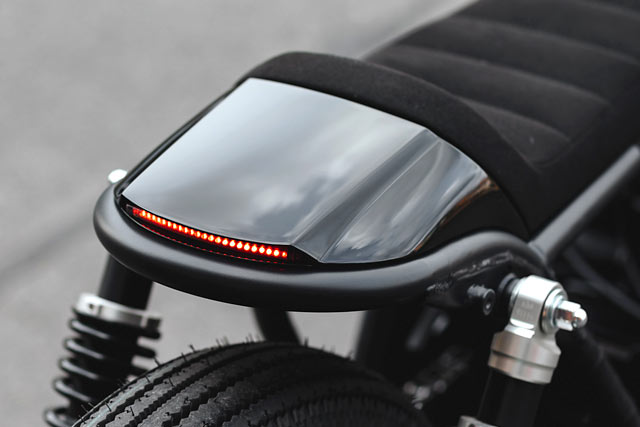