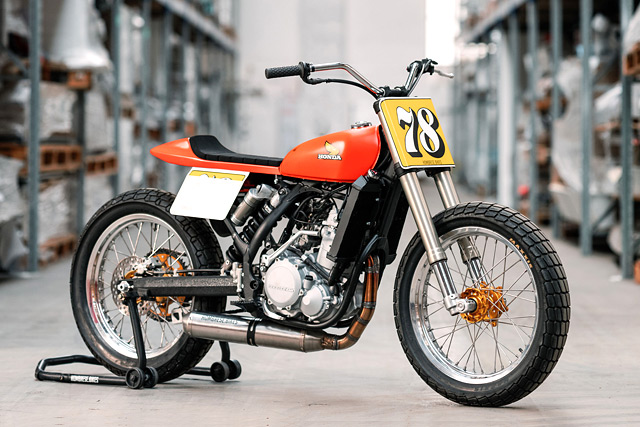 We totally get show queens here at Pipeburn. Something built and polished to within an inch of its life, destined to live out it’s existence in a shop front window or a lounge room. That’s cool. But even better is a custom bike that’s going to be thrashed, dropped, flipped, and bounced off people’s heads. And here’s the best example of that you’ll see all week – a 2006 KTM 450 SX flat tracker built by Germany’s Hombrese bikes. 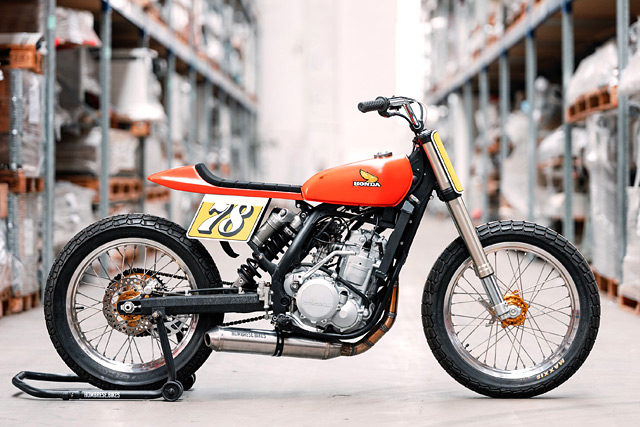 Hombrese’s been running for a few years now under the guidance of founder Uwe Kostrewa. He started by building a SR500 for himself before moving onto a GN Suzuki. And then the orders started piling in. Over the last few years he’s played with all sorts of motorcycles, classic Japanese bikes, a bit of American Iron and the odd Ducati. 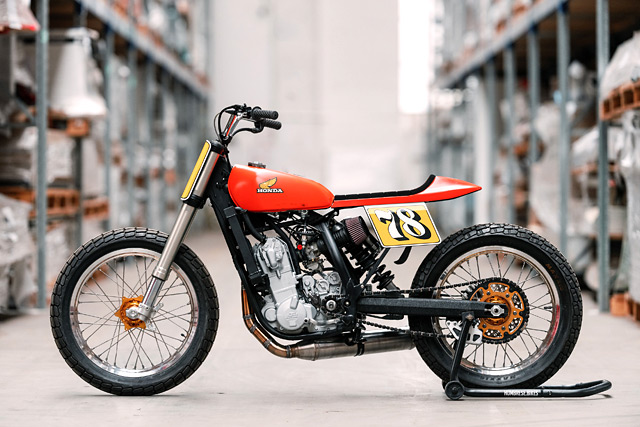 But lately it’s flat track racers that have really caught his eye. And he can only blame his mates for that. A while ago he built a tidy little YZ450 flat tracker for a friend, who wanted to get into the whole ‘left and left again’ scene. And when the tidy little ride was finished Uwe took it for a test run out at the El Rollo race in Spain and again (just to be certain, right?) at a track in the Netherlands. Uwe found himself completely hooked. He needed his own tracker. Stat. 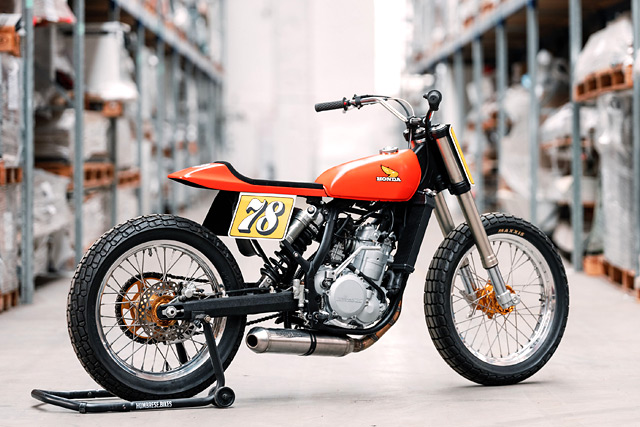 So he fired up Ebay, had a click about and stumbled across a suitable donor. “I bought the first KTM 450 SX I went to look at,” he recalls, “and it was in a horrible condition.” Typical of a much-loved MX bike the old Austrian was beaten, rusted and looking very worse for wear. But the engine seemed tight, so hey, why not? With the bike back in his shop, Uwe went to work. 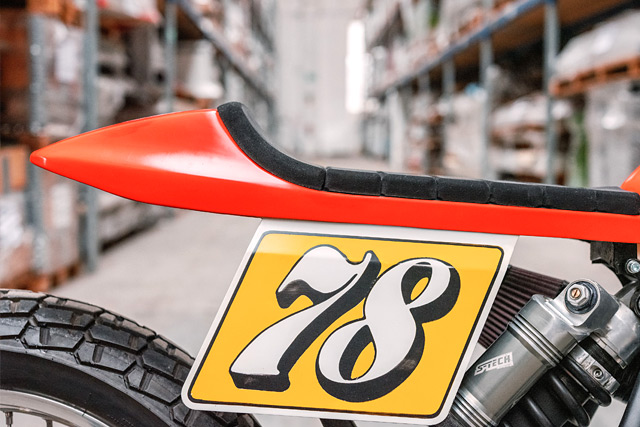 “That was supposed to be the extent of Uwe’s plans. But as these things tend to do, it got a little out of hand.”

“I disassembled all the plastic parts and then lowered the bike in the front and the back to try and find the right lines,” he says. “I was firstly going for the overall look, working around the tank. It was an old Honda gas tank from the 70’s which still had the original paint and a natural patina to it.” That was supposed to be the extent of Uwe’s plans. A quick, easy build that he could take to the track. But as these things tend to do, it got a little out of hand. 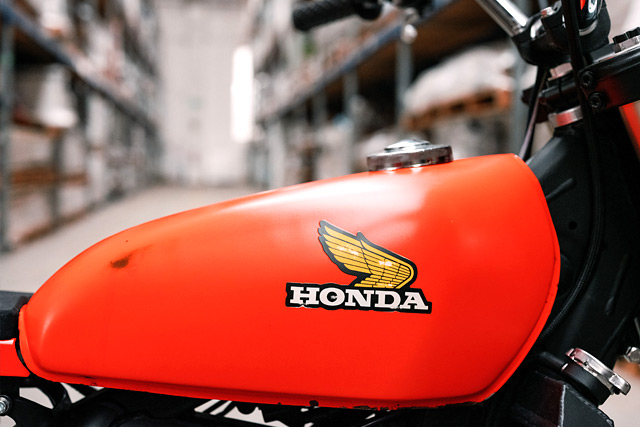 It started with the fabrication work. Uwe rebuilt the rear subframe and made a new tail of fibreglass and foam. Uwe, a mad keen surfer who repairs and modifies his own boards (and travels over 12 hours to France to hit the beach, the mad bastard), sailed through this section easily. So the quick and easy build was now a new seat, new subframe, new tank, dropped suspension and a set of Excel rims laced to Talon hubs. Not all that quick and easy, huh? But then the frame went in for blasting. 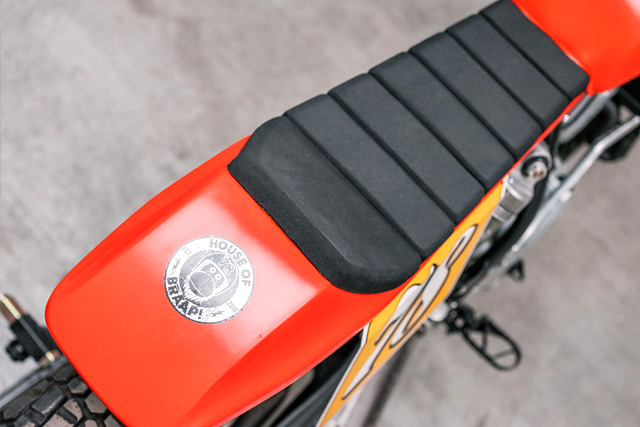 When Uwe saw the result he was shocked to see the raw frame showing up every smack, bang, fall and scrape the KTM had suffered throughout its career. So Uwe couldn’t resist the temptation to tidy it up and paint it. Then he painted the swingarm, motor and a whole host of smaller parts. He welded the exhaust up with the Akrapovic end can. Polished the rims. The rough and ready track star quickly became a thing of real beauty. 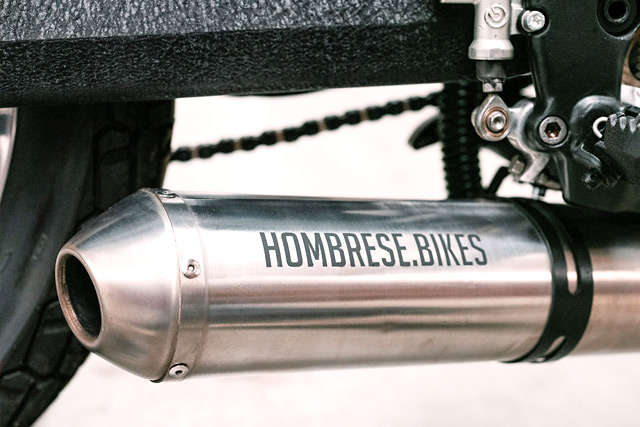 Not that it’s ever going to be a show queen. Despite the polished looks of the KTM Uwe’s determined to take it to the track – this weekend, in fact. If his arm’s healed. During a practice session on another steed last weekend he fell and a rider behind him used his head and arm as traction. It doesn’t sound like the best place to take a bike as nice as this. So does he have any concerns about taking a bike this pretty out for a race meet and binning it? “No. That’s part of the sport,” he says. 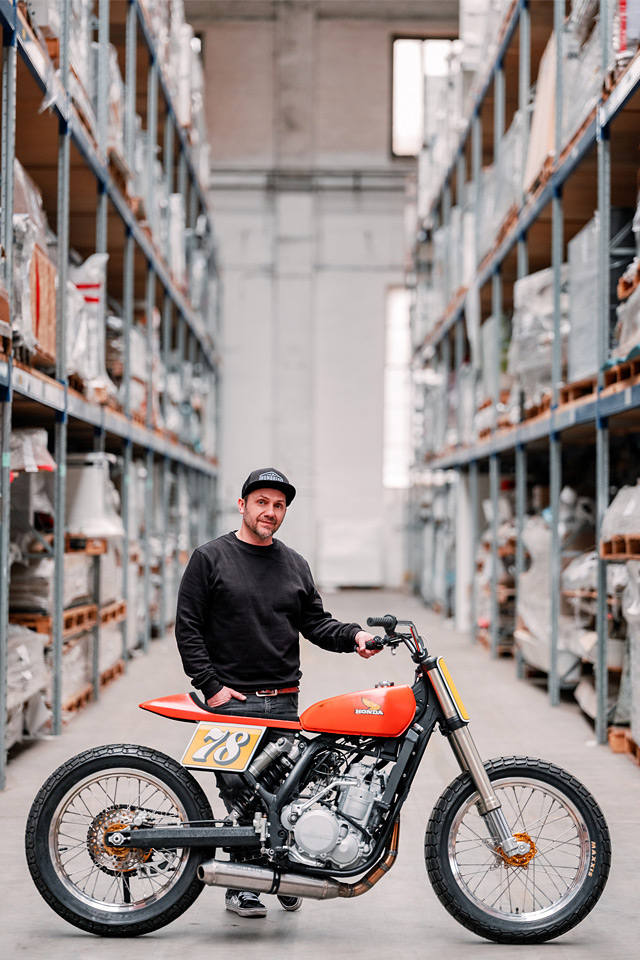 The KTM rounds out another gorgeous Hombrese build. And we’re convinced this isn’t going to be the last tracker he turns his hand to. If he can find the time in the future, that is – he’s just about to launch a business dubbed ‘The House of Braap’ which will sell all sorts of motorcycle trickeries to people building custom rides. Keep an eye peeled out for that website soon. In the meantime feast your eyes on his latest creation and wish him luck this weekend! 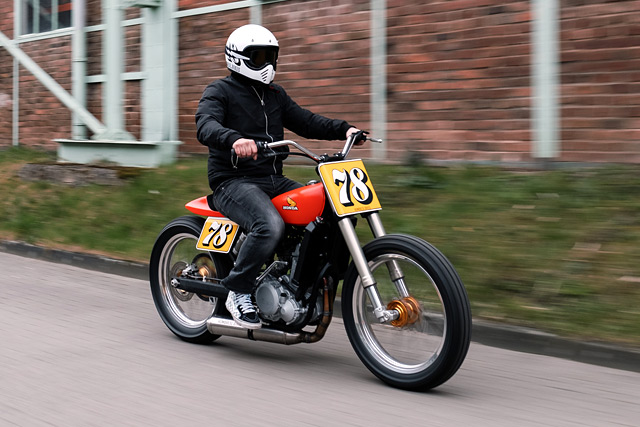