We wear our hearts on our sleeves when it comes to Yamaha’s good ol’ Virago Vee. We bloody well love ‘em but boy, we’ve seen a damn heap of them. So needless to say that it takes something a little special for us to notice them nowadays. Enter Denver’s 485 Designs and their rather unique chain-driven XV920. And by ‘unique’, we mean ‘tough, stanced and with a technically sublime Ducati rear end.’ Check it out… 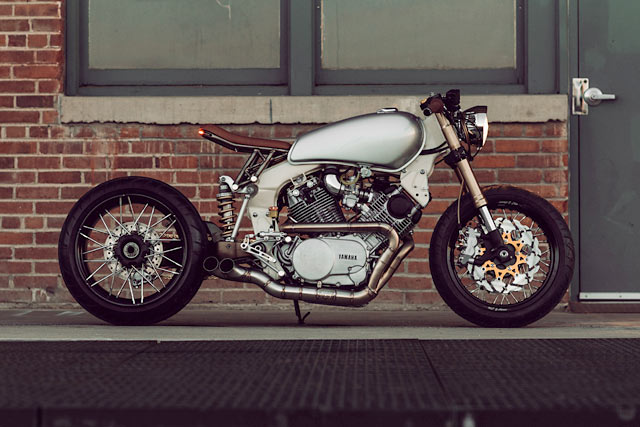 “We’re located just south of Denver, Colorado,” says the shop’s Nick Mercer. “We’re always staying busy doing something interesting with these old bikes. It is just me and my co-worker, who’s also named Nik.“ Sounds confusing. “The other builds consist of a couple more Viragos – one being a turbo build. We have also been working on marketing our products including exhausts, sub frames, powder coating and fabrication. We will be attending the 2019 Handbuilt show with this very bike.“ 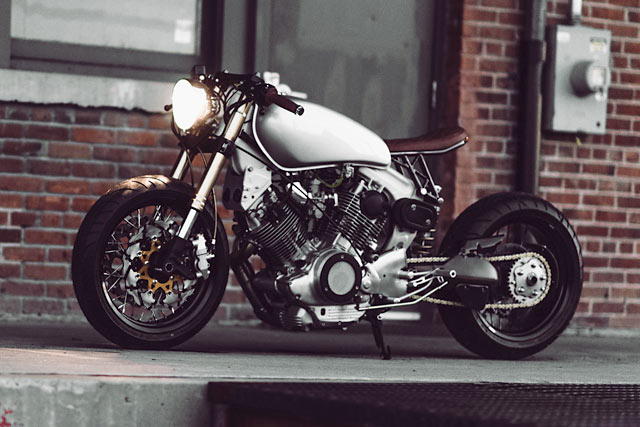 Nick 1 says that he feels most people would consider it a ‘cafe’ but he can’t – or would prefer not to – put a label on what style it is. “Technically, it’s a Yamaha XV920R from 1982. But the build didn’t exactly start out as a complete bike. I acquired the motor off Craigslist about two years ago and had it shipped to the shop from Maine. I started gathering parts from there to build a complete bike.” 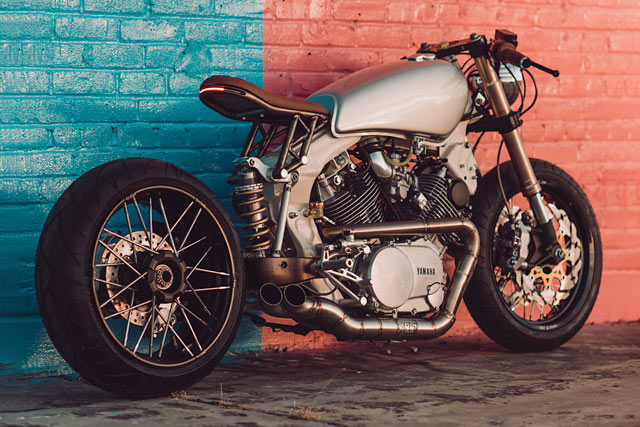 The boys say that their inspiration for the build was to simply make a clean finished product. “We see so many Viragos out there that get a lot of exposure and still look half finished; we paid very close attention to the details and we made sure everything came out looking exactly how we wanted it.” More inspiration was found in the technical obsessiveness of the chain drive conversion and the addition of the lovely laced wheels. “The overall goal was to make a Virago unlike any other, which is hard to do now that the platform is so common.” 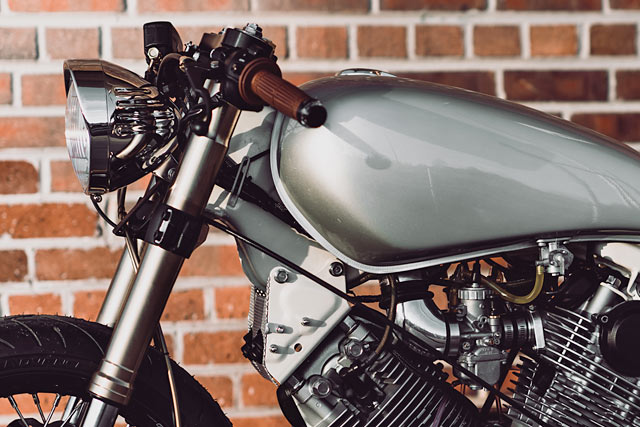 “The build process was extensive. By starting with just a motor, it simplified things a lot by not having to disassemble a stock Virago and then throw 85% of the parts into the trash. From there we got a frame and started working on that, but we had to have the rear end components sorted out beforehand. The rear end was the most in-depth part of the whole build, as the Ducati swingarm needed to work properly with the XV920 frame and the chain-driven motor. Everything had to be precise and come out looking perfect.” 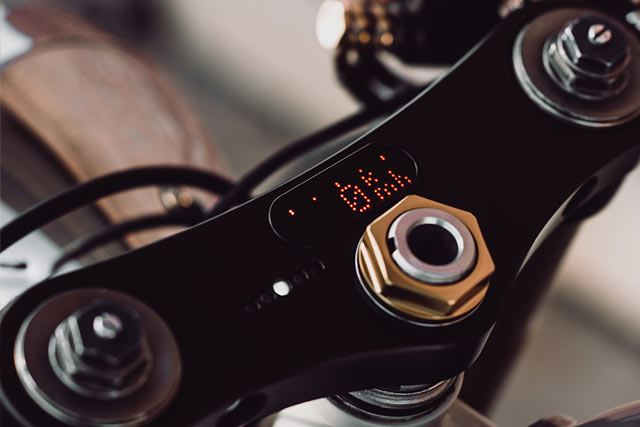 Next, the frame was notched for the Ducati suspension and the subframe was modded to mount the shock. Also note the updated rear disc brake. “The whole rear end speaks for itself as to how much work it really took,” says Nick. All the electronics are under the tank including the new battery. “After finsinhing the rear end we were able to get it on the ground with the GSX-R forks in place and were able to really dial in just how we wanted the overall stance of the bike to be. The sportsbike front end paired with the fat Ducati rear end gives the bike a completely new look.” 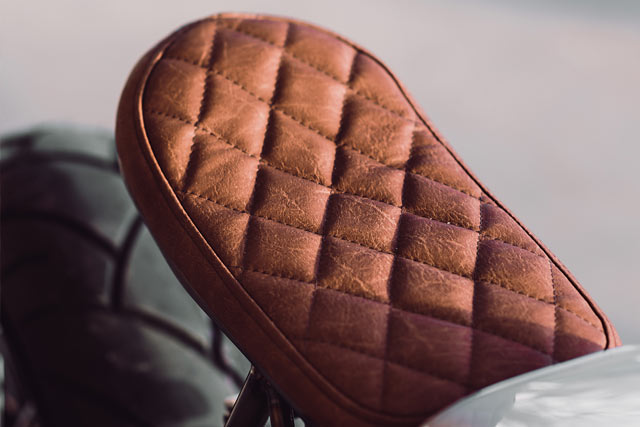 “The hardest part of the build was definitely making the Ducati rear end fit the bike and work as it should with the linkages and brackets. Once it was on the ground, tweaking the height and rideability of the bike was also very tricky and it took a lot of adjustments with the shock and plenty of grinding and welding; all while maintaining the proper look. Mating the swingarm to the Virago rear frame bracket was also extra challenging.” 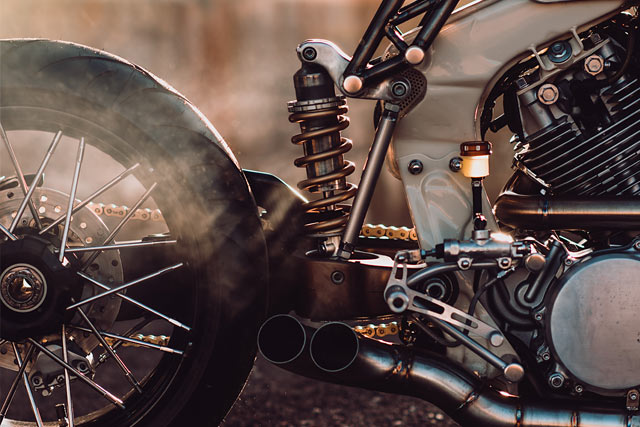 “What we like most about the bike is the combination of having the old Virago chassis updated with the front and rear ends,” concludes Nick. “It gives the old machine a complete facelift and merges it together with some modern technology while still having the old school cool factor. This gives you the plus of having disc brakes front and rear, modern suspension that responds well to corners, a better overall feel and it obviously looks much cooler, too. We really like having something unique that you haven’t seen before. Something that would make people wonder what it was.” 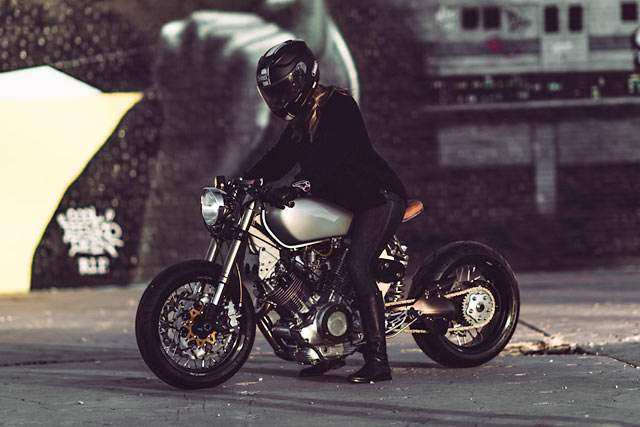