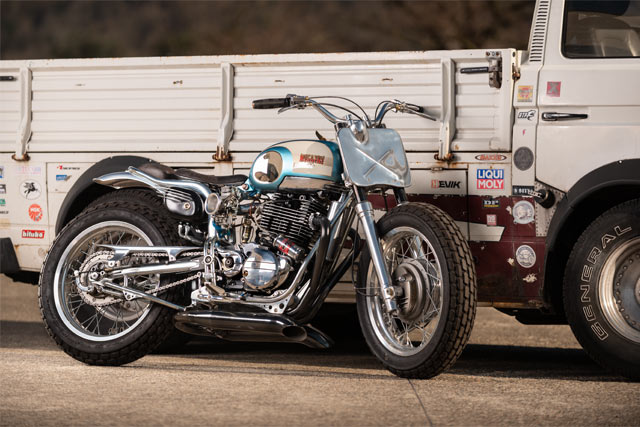 As closely related as they are the custom worlds of two and four wheels rarely meet, having developed entirely distinctive cultures over the last hundred years. But that wasn’t always the case. The original Hot Rodders and Cutdown bikes of all kinds shared a common philosophy of shoving the biggest engine into the smallest frame possible. Now Italy’s Plan B Motorcycles has taken things full circle and in the age of high-tech, they have built a proper Moonshine Racer. From the carcass of a Bianchi Tonale comes the ‘Flying ’57’, a bike that’ll outrun any cop on your late night liquor run. 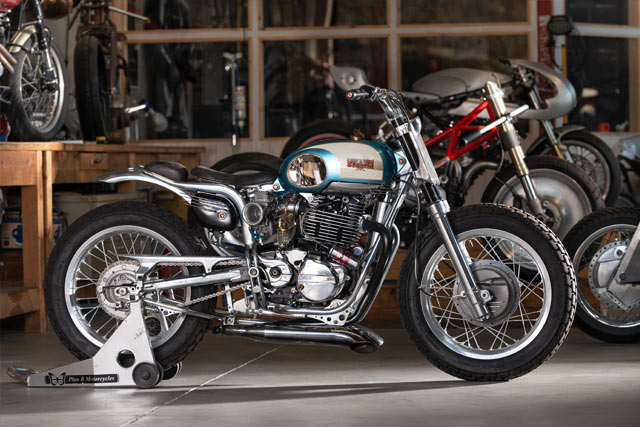 Step inside the Northern Italian home of Plan B Motorcycles and it’s instantly apparent that this is a place of old-fashioned hard work. Amongst the welders and workbenches are some of the incredible machines that Christian Moretti has constructed. From historic racing motorcycles, to classic custom cafe racers and tyre shredding drag bikes, if it’s mechanical he can make it! But for his latest build he had a fresh idea, to create a barn find motorcycle from an alternative universe, an Italian “moonshine racer” packed with ingenuity and hidden details. 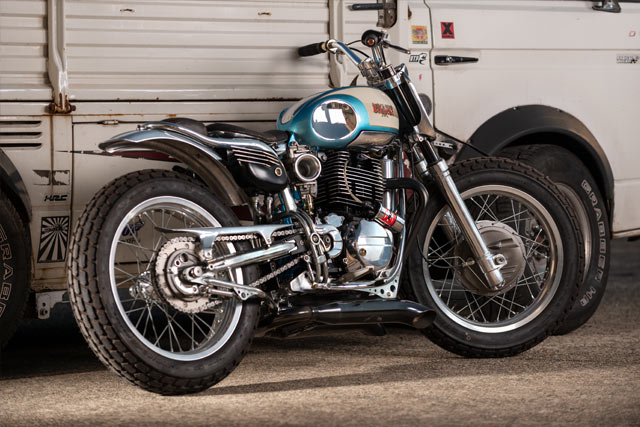 Bianchi is the world’s oldest bicycle manufacturer with enormous sales success and wins at the Tour de France. But for a 70 year stretch they also produced motorcycles, largely for the commuter market while also enjoying some racing success and sadly a supercharged four-cylinder that never quite made it to market. But with so much invested in the bicycle industry it’s clear a few of the engineers joined the motorcycle division, as the frames were known for being a little too flexible for anything more than pedal power. 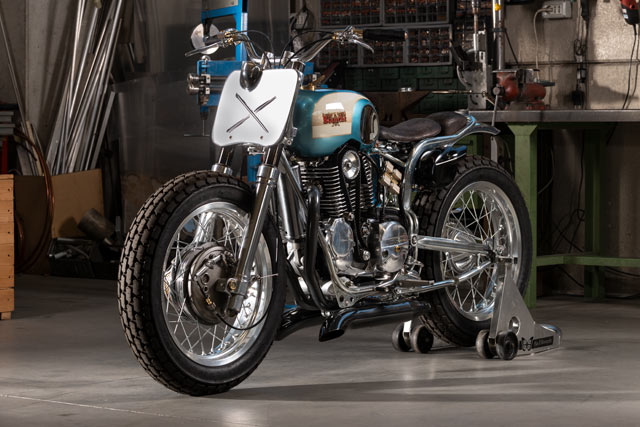 So when a client of Christian’s showed up with a 1957 Bianchi Tonale 175 frame in one hand and a big engine in the other, he knew he had his work cut out for him. At first there was some cutting and grinding before the engine was offered up. But it quickly became clear that this build was going to require far more drastic work. So the grinder was spun into life and everything from the down tubes back was chopped off and thrown away. Now the single cylinder Rotax engine fit perfectly, with one small problem, there was really no motorcycle left. 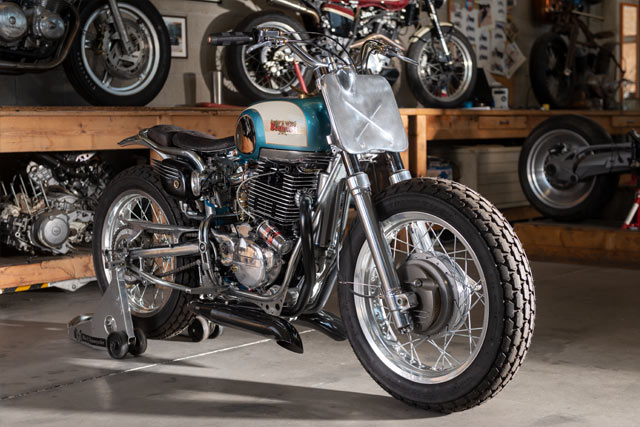 The solution? Around the engine Christian constructed his own frame, engineering in both extra strength and improved geometry while keeping everything as tightly packed as possible. The quality of the work speaks for itself; from the beautifully crafted twin centre posts to the stunning tapered steel subframe that flows organically rearward, you simply have to drink it all in. Once the frame was complete the swingarm was slotted in, with more masterful work to ensure the mass was centralised before it was all sent off to be Zinc coated and polished.

“The quality of the work speaks for itself; from the beautifully crafted twin centre posts to the stunning tapered steel subframe.” 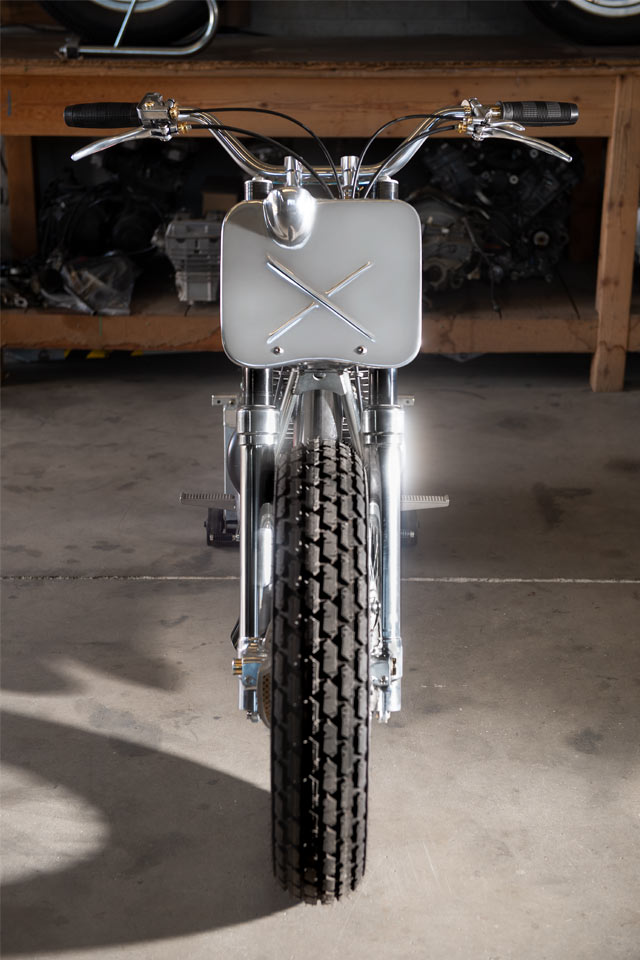 But there was a problem brewing at Plan B that hadn’t gone unnoticed, in fact it was an excuse to get creative. Behind the comparatively big engine there was now no longer any room for a suspension setup and a hardtail would be taking the easy way out. So with his genius like brain running at high rpm, Christian fabricated all the bits and pieces to front mount the rear shock, now nestled between the down tubes. John Britten would be proud and he wouldn’t half love the Italian forks either that play host to a glorious racing front drum brake assembly. 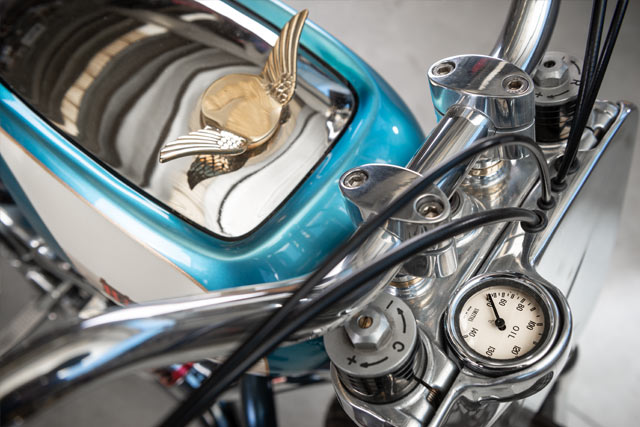 Adjustable forks? This Bianchi never had it so good

That Rotax engine is a sight to behold and with years of tuning under his belt Christian knew how to get some extra ponies from her. Pouring in the fuel is an air gulping, side mounted Mikuni flat-slide carb bolted to the blacked-out engine with polished fins. While adding to the Hot Rod mix is an MSD Blaster 2 coil to ensure every cycle produces a big bang. The exhaust gets creative by necessity, with the length required coming by way of rearward running ceramic headers belching flames out of forward facing chrome mufflers. 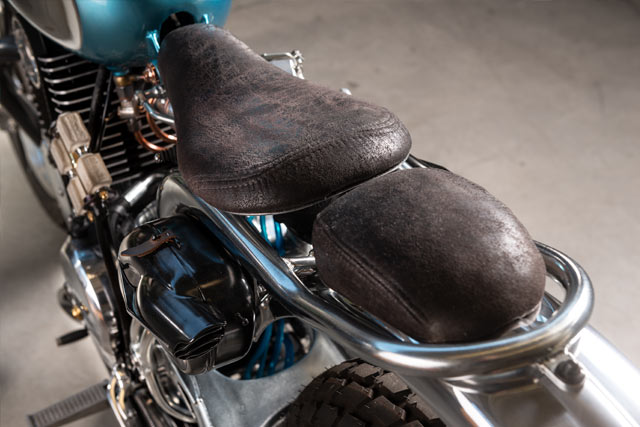 The exposed belt and toothed pulley give that classic supercharged look usually found in the muscle car world. With the rest of the visuals no less impressive in truly capturing the theme of the bike; and the notched Bianchi tank is simply a thing of beauty. Perfect paint, flawless chrome and the sort of decal and pinstriping work you have to find an old master to perform. With the distressed leather seats and bead rolled front number board straight from the Hot Rod playbook. Plus copper lines and winged oil tanks, the perfect fit for a machine called ‘Flying ’57’. Mad Max, eat your heart out

There are more custom touches than we could possibly list, but even the purchased parts have a story to tell. “The non-handmade parts come from a long list of different bike models, cars and even a tractor, but everything was disguised to look just right in the mix,” explains the Plan B boss. With modern lightweight rims and new Dunlop rubber capable of on and off-road use, the rodded Bianchi is ready to fly. And you better believe she does, with over 60hp and weighing just 110kg you better drink your Hooch when the hauling’s done, as this little lady has a mean kick when you crack the throttle! 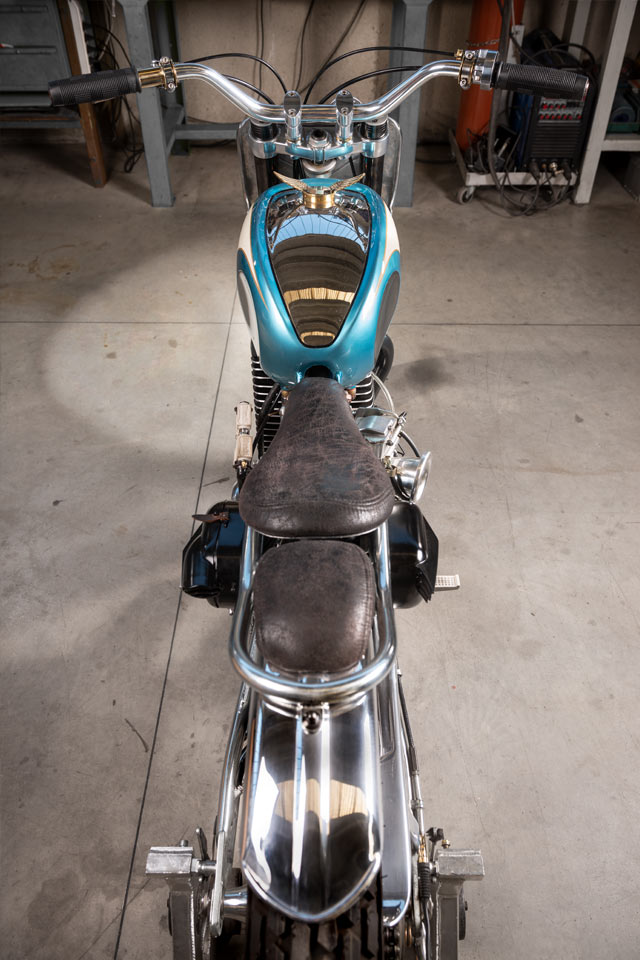