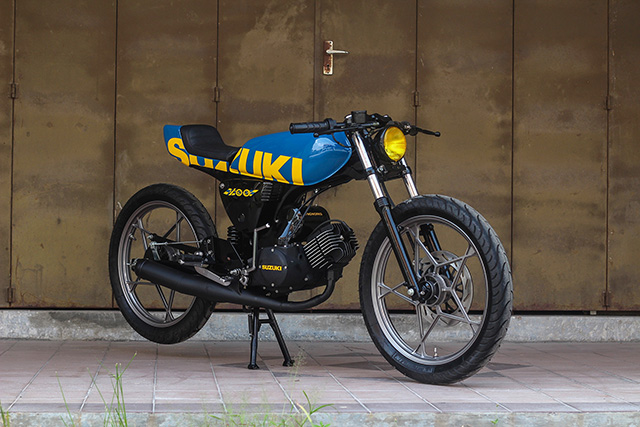 When it comes to classic motorcycle livery, we’ve all seen the usual suspects: Gulf Oil, John Player Special, Marlboro, Rothmans, Lucky Strike and even the French cigarette company Gauloises come to mind. But Irwann Cheng from FNG Works in Malaysia decided to choose something a little different – the colours from the Sunoco Team Penske Chevrolet. It all came about when Irwann was commissioned to bring an old Suzuki back to life. He decided to do a bit of research on the classic Suzuki colorways of the 70s and 80s and discovered they weren’t very inspiring. He then delved into the world of car liveries and found a match. “I stumbled upon the Team Penske Chevrolet Camaro and its colours are similar to the Suzuki blue and yellow.” 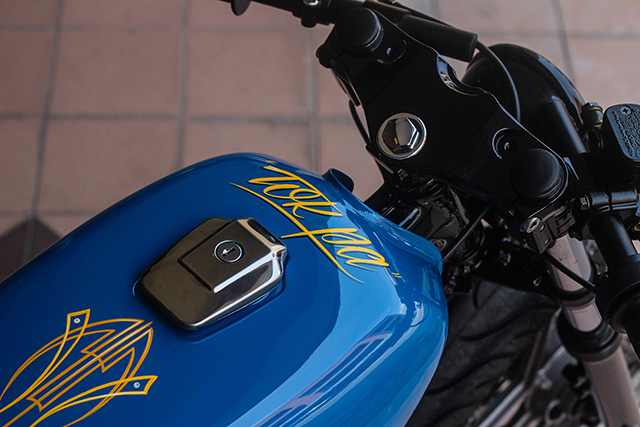 We love a good story behind a build, and this one is a nice tribute to a Dad from his son. The son is a gentleman by the name of Ustaz Don, who is a Malaysian celebrity and TV Host. His Dad’s name is Tok Pa – he had owned an old Suzuki A100 from back when he was much younger in the 1970s. “Then the bike was lent to his friends and family and then disappeared. As the years went by, the bike was forgotten by Tok Pa, but somehow his son Ustaz managed to track it down and planned to get it back alive. To give it as a birthday present for his dad.” 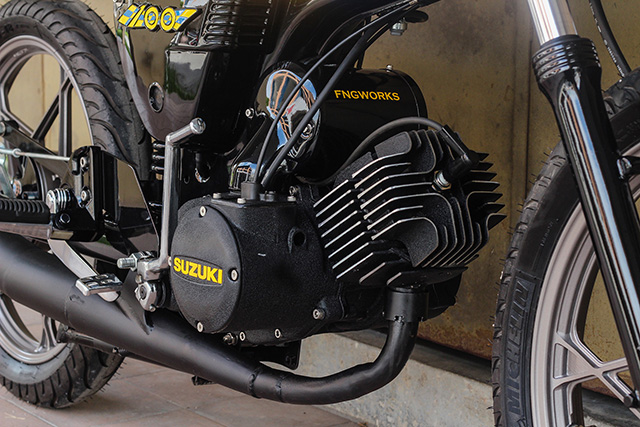 Initially, Irwann suggested doing a complete, from the ground up restoration on the bike – back to how it originally looked when Tok Pa first got the bike as a fresh-faced young man. “However, he insisted that I build it up as a cafe racer since his dad liked the cafe racer bikes. I agreed to his request.” 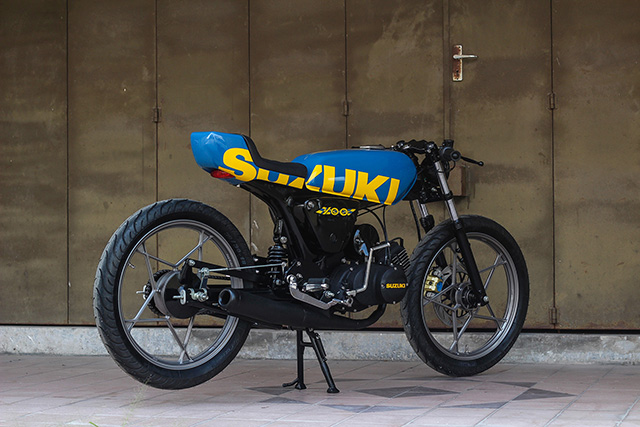 Irwann started by stripping everything down and had the frame sandblasted to repair the many rust spots. “Then I bought some Suzuki Star wheels from a Suzuki TXR150 model – these are iconic wheels for the 80s Suzukis. I used the same model brake rotor up front and paired the wheels with Michelin Pilot Street 90/90-18 front and back. I upgraded the front drum brake to a disc brake using a Yamaha TZM 150 Triple Tree mated with the Kawasaki RR150 Fork for the front end.” 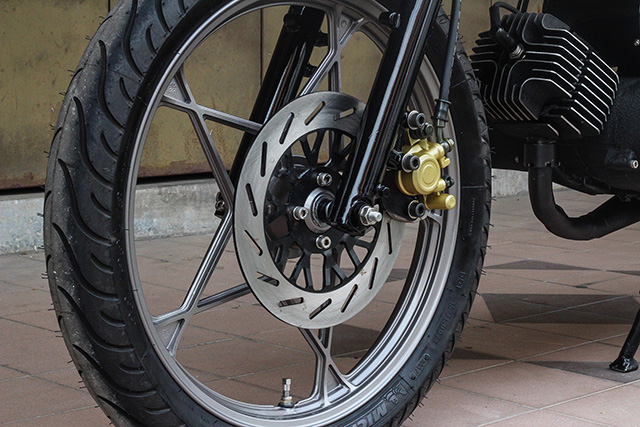 Next, Irwann assembled the engine, wheels, front suspension and clip-ons, originally using the stock rear dual absorbers. After seeing the complete set-up for the first time, he realised it wasn’t right. “Since the engine is quite horizontal, there is negative space between the engine and the petrol tank and I decided this negative space should be implemented in the rear too.” 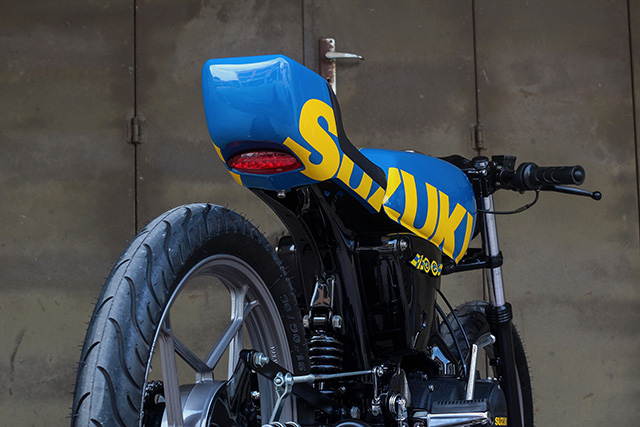 To get the perfect balance, Irwann swapped the rear swingarm to one from a Modenas Dinamik 150 so he could use the monoshock set-up. “I adjusted the mono angle steeper since this bike is a lot lighter than the Modenas Dinamik 150. This resulted in a negative space in the rear between the rear wheel and the seat.” 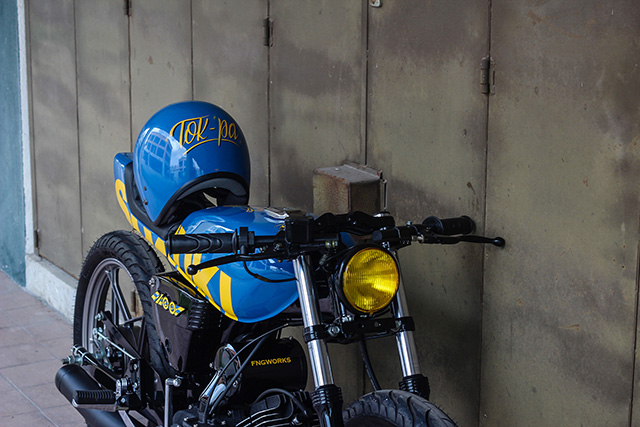 The original tank was too rusty to use, so was swapped for a Yamaha RXS115 tank, but Irwann managed to salvage a part of it from the rust, which he ingeniously used to make the rear seat-tail section. “This seat-tail section houses an LED lamp that is partly hidden, so that it can be seen from the rear, but almost not visible from the side, to give it a clean look.” 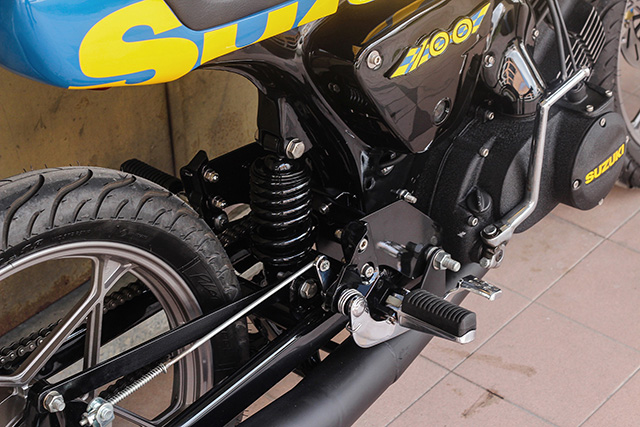 The engine was completely overhauled with new bearings, a conrod and a piston, and a larger carburettor was added. The crankcase and the casing were sandblasted before being painted in black. The paint on the cylinder head and block fins were sanded back to bare metal to create some contrast – all the bolts were swapped to a stainless steel for the same reason. 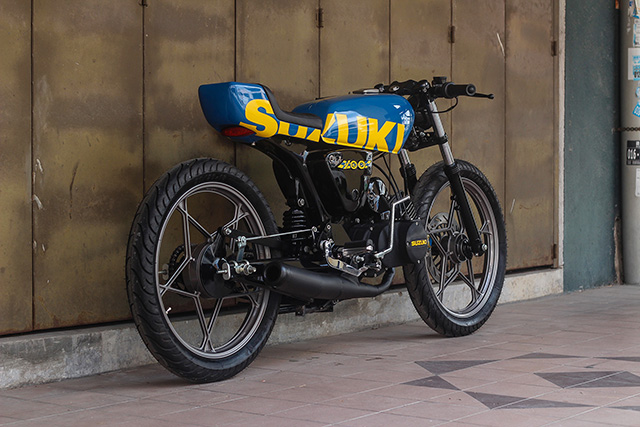 To finish the build off, the frame was powder coated in black. The wheels were painted in gunmetal grey, while all the other bits, like the swingarm and the forks, were in black. For the tank and the seat-tail section, Irwann chose the blue and yellow colours from the Team Penske Camaro that dominated the Trans Am back in the late 60s. Irwann also thought it would be a nice touch to have ‘Tok Pa’ hand painted on the tank with some pinstriping by Ab ElDaddy from 405 Industries. 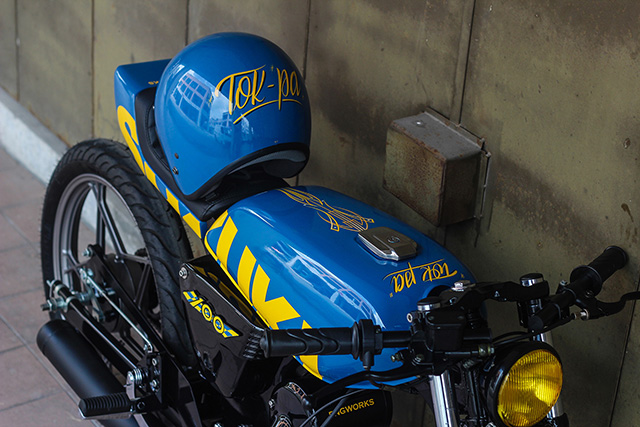 The end result is a beautiful little café racer that will turn heads on the streets of Malaysia. But most importantly, Ustaz Don and his dad, Tok Pa, were blown away by the finished bike. It’s safe to say this will stay in the family for a few more decades. 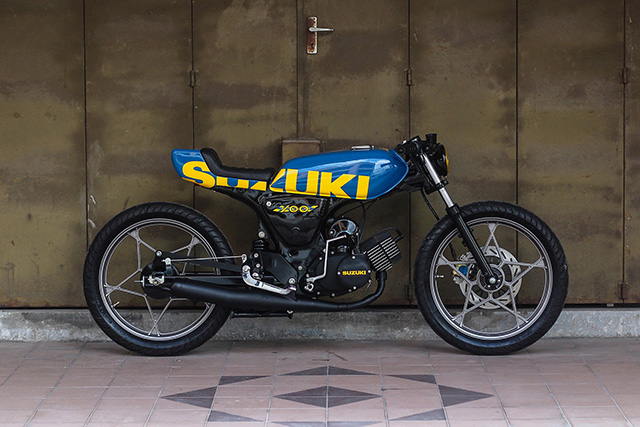