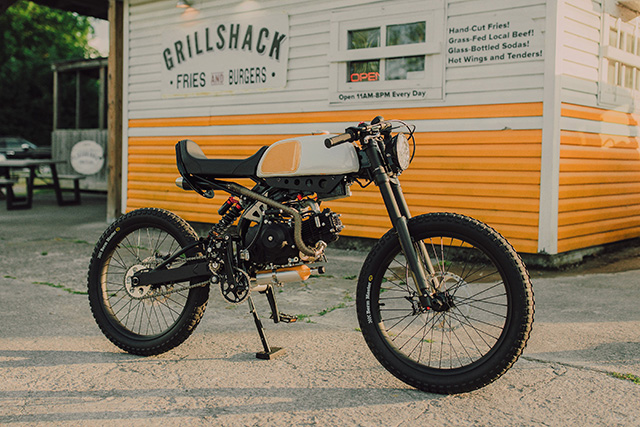 From the earliest days of the motorcycle industry and its pioneers, there have been two-wheeled machines sporting both pedals and petrol power. The humble Moped has been transporting urban commuters for more than 100 years, but you’d hardly say many of them were cool. Now with insane traffic, congestion charges and pricey pump gas the little twin powered machines have become an attractive option for many. Plus, wherever there’s an engine you’ll find modifiers like Casey Kilmer who has fashioned ‘Daisy Duke’ from a 2018 Motoped Café. 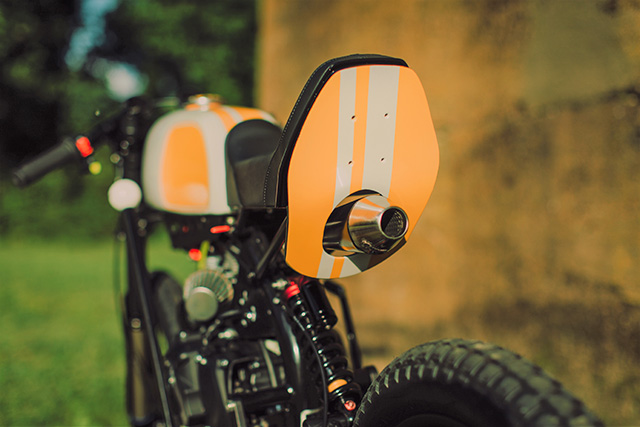 The Motoped machines are at the high end of the Moped market, with excellent engineering, quality components and original designs they find a home between a serious downhill mountain bike and a small capacity motorcycle. While Casey focuses on four wheels during the day at Nissan North America, the little two-wheeled machines have captured his heart. He already owns a replica ‘General Mayhem’, one of the most talked about bikes in Pipeburn history, and was out to create something in his own style. 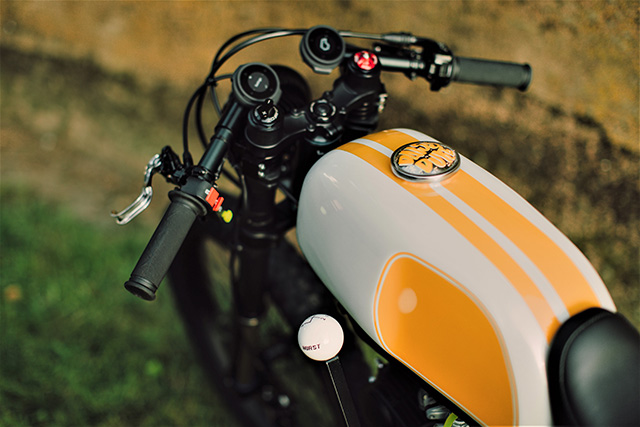 With the working title Project KickTail the 2018 Motoped Café is actually a prototype of the now production machine and all the modifications were carried out in the dining room of his home in Nashville, Tennessee. “Given that this was one of the first Café prototypes Motoped produced I didn’t want to touch details like the hand-built aluminum gas tank, or the seat,” Casey explains. Instead, it was all about adding a personal touch and instilling more cafe racer personality with subtle changes. 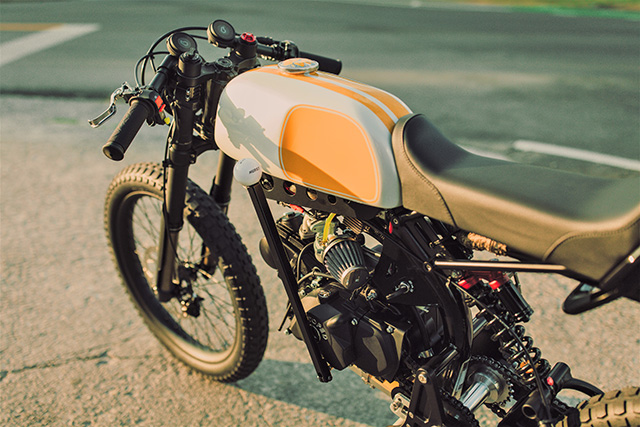 Out of the box, the Motoped is no cheap eBay special with dodgy steel frame and shoddy workmanship. Instead, the frame is 4130 Chromoly that supports a double heat treated 6061 Aluminum swing arm. But it’s what’s in between the two that sets the bike apart from the pack, Motoped’s patented jackshaft with a forged alloy crank allows the twin power system to operate under extreme duress where most simply snap and end up at the nearest rubbish tip.

Providing the non-human power is a 49cc Honda style single cylinder that’ll happily rev up to nearly 8000rpm. That might not sound like a recipe for speed, but the high end materials deliver a wet weight of just 55kg, about the third of the weight of an average learner bike. To kick things up a level Casey re-routed the exhaust, fitted it up with a high flowing muffler that exists behind the seat and wrapped it up to keep his legs from burning. 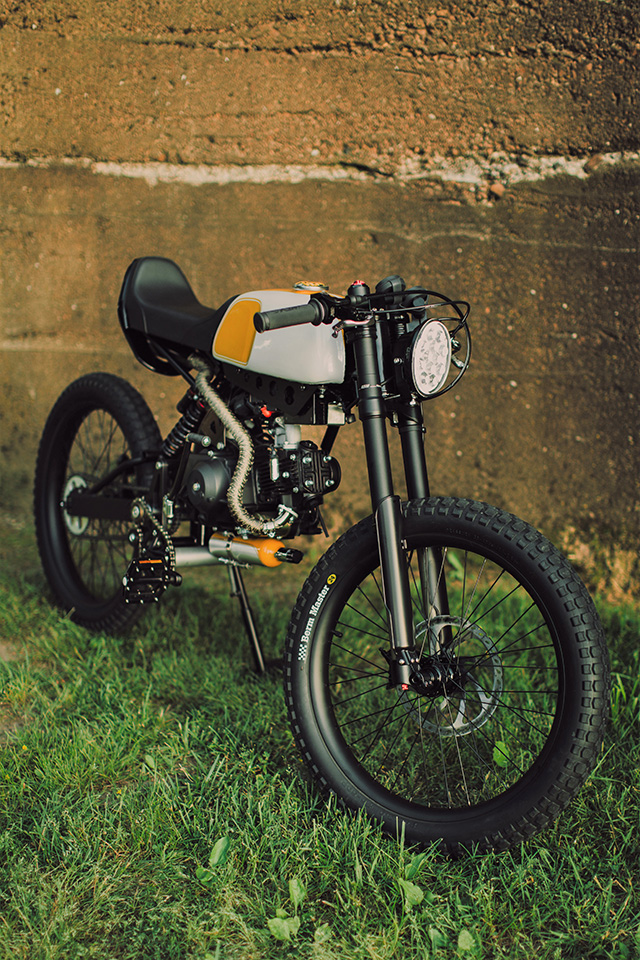 “I must admit, the tank-mounted shifter brings attitude to fit this bike, but it can get dicey,”

In case that’s not enough for you, he’s added some giggle gas with a DynoTune 12oz. nitrous bottle strapped under the engine. Punching through the semi-auto box with a suicide shifter topped with a Hurst cue ball gear knob, little Daisy Duke will hit 40mph (65km/h). But it also packs the torque to take you places your legs would long since have given out on trying to reach, even if it gets a little hairy. “I must admit, the tank-mounted shifter brings attitude to fit this bike, but it can get dicey,” Casey laughs. 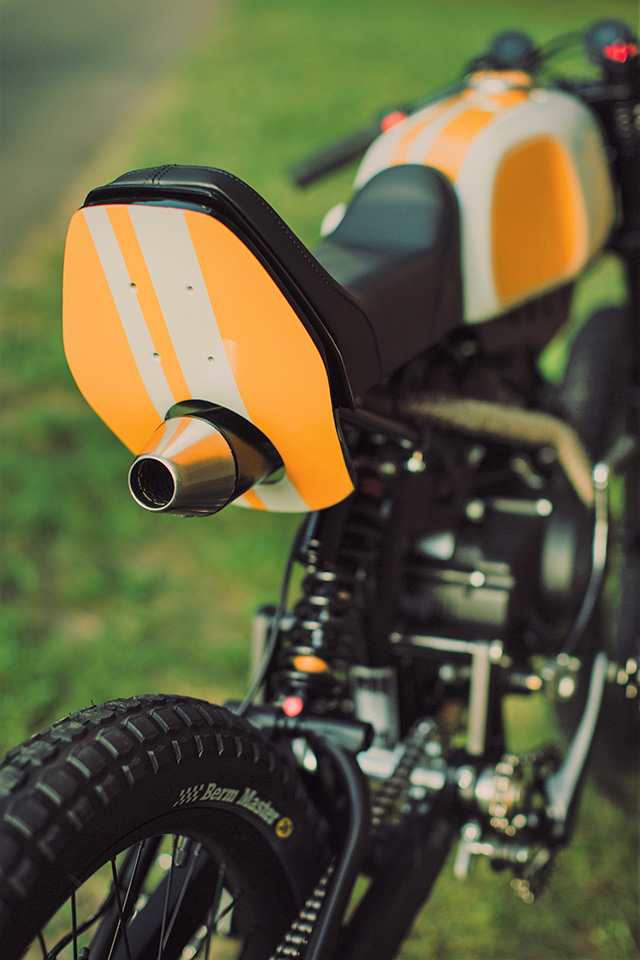 The beautiful factory tank gets a new paint job finished in a pearl white from Volvo with yellow that was colour matched to the painted lines of the road. The yellow is used on the chrome cap that has the bikes name now emblazoned upon it. With the twin speed stripes running rearward but with the colours cleverly flipped on the tail. Inspired by the use of a Skateboard on the ‘General Mayhem’ Casey used one to make his read end, telling us “I actually cut a real board myself with a jigsaw and sandpaper.” 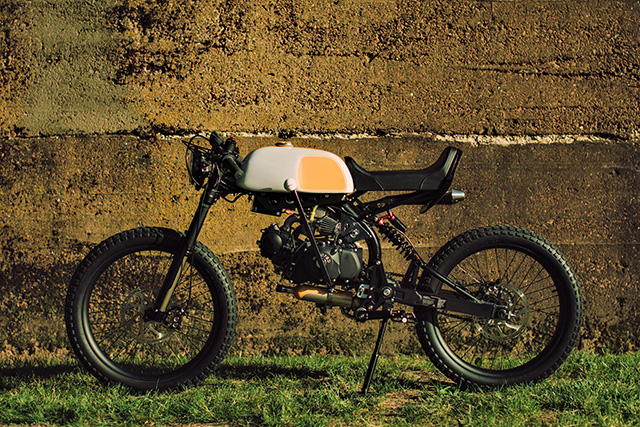 To give the bike a more modern motorcycle front end feel a Voltage Automotive 5.5” LED headlamp sits between the adjustable DNM forks. The rear end has a remote res adjustable shock also from DNM with Hayes Brakes providing plenty of stopping power. It’s all finished out with dual Beeline Velo gauges for navigation and speed. Sure, it won’t win a 1/4mile drag, but she’ll split lines, tear up trails and fly through the urban landscape like nobodies business. And thanks to Casey Kilmer giving her some extra speed and a stunning makeover, there will be plenty who’ll just have to admire ‘Daisy Duke’ from the rear.