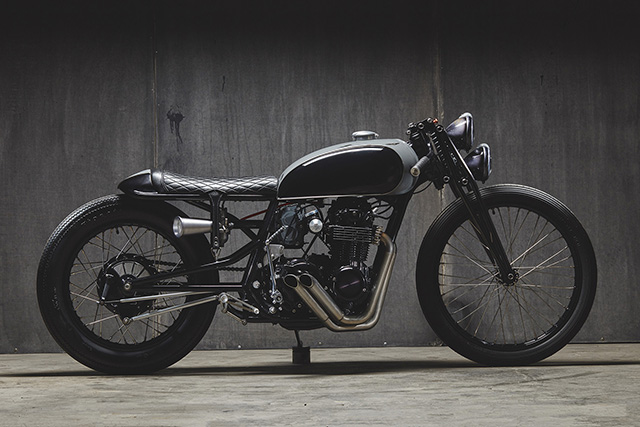 All that glitters is certainly not gold; what was supposed to be a quality custom café racer built by a hot shot from California arrived in Australia a disappointing mess. Some carefully taken photos and a host of hidden problems meant this wasn’t discovered until the CB550 had crossed the Pacific. But Justin Holmes of Australia’s PopBang Classics came to the rescue and every time the owner asked him to up the ante, he delivered. The finished product is a supercharged 1975 Honda Hot Rod that finally has the Hollywood happy ending. 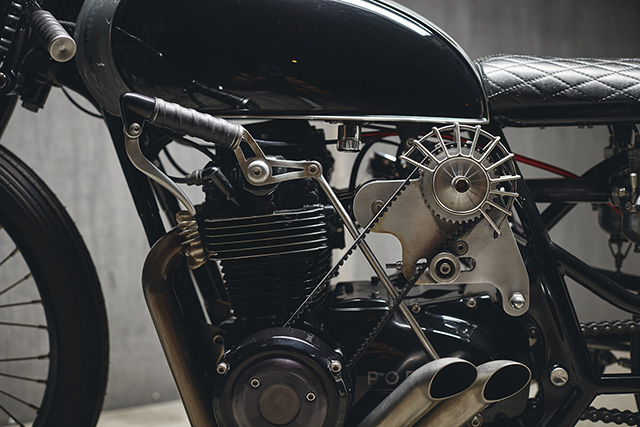 The owner of the bike Aaron, is the proprietor of Ze Pickle restaurants, and Justin has worked on his bikes for years. But one day he got a call to come and check out this new ride that Aaron had brought over from the states. “At that stage it was pretty stock, with bare metal tank that had knee cut outs roughly bashed into it with a hammer and a bare metal cafe tail that was just tacked together leaving sharp edges exposed (I sliced my hand open on it). The clear coat was flaking off from all the rust forming underneath, the brakes didn’t work, the wiring was a birds nest of just red wires and it blew more smoke than a coal train,” Justin recalls. 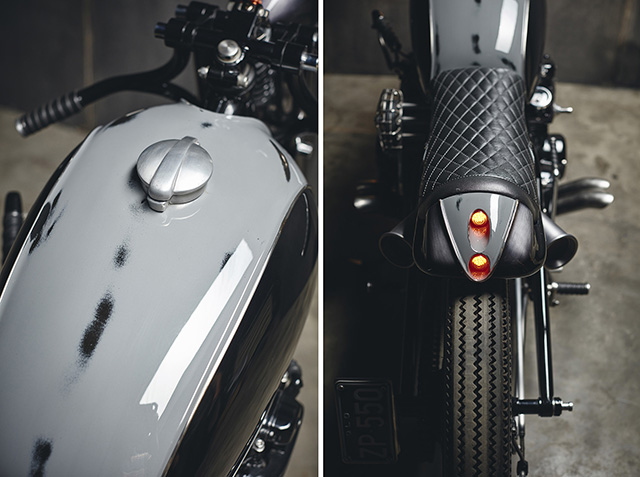 Not good. So after getting the call to repair it every time it broke down, Aaron finally looked over at his custom crafting mate and said, “bugger it, cut it up and make something new, make it a PopBang bike.” He’d barely finished the sentence and Justin was pulling the bike to pieces, keeping just the frame, swingarm, engine and rear wheel. At the same time Justin was developing a Girder front end and Aaron wanted his bike to be the first to wear it. So with the CAD drawings done the Chromoly setup was pieced together with needle roller bearings and a modern shock. 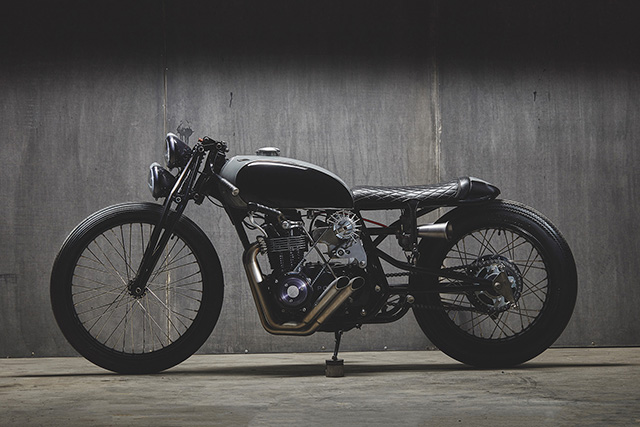 Next on the list of things to do at PopBang was to take care of the bodywork and it all starts at the rear with the glorious hand formed tail unit. The frame and metal work merge seamlessly together while the sunk taillights give it a unique rear view. The “hammered” tank that came with the bike was replaced by an unmolested CB550 unit that was treated to a Monza cup and integrated stainless steel moulded trim for a touch of class. “I painted it all in gloss black, leaving some brush finished metal exposed and added what was then a turquoise patina to the tank and tail to match an old F100 pickup he had,” Justin explains. Some more work was done and it was starting to take shape when Aaron paid a visit to the shop. “Hey man, I sold the F100, can we change the turquoise to Nardo grey? And how would you feel about making it a rigid?”. So practicality was now out the window but never afraid of a challenge Justin picked his tools and jaw up off the floor and got to work. The rigid was designed and then built to drop the bike as low as was possible with the current mods and with the paint sorted out in Aaron’s new favourite colour both agreed the right decision had been made. 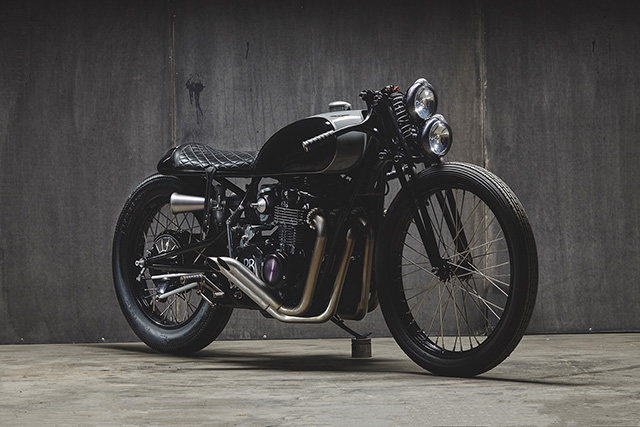 With the rebuilt engine stripped and painted black, that too was thrown into the frame and as Justin remembers “All was smooth sailing again, until I stupidly sent Aaron a photo of a Honda Four with a supercharger. The photo almost looked like it was taken in my own workshop. He thought it was his own bike and got way too excited…”. You know what’s coming next, Aaron couldn’t be persuaded and wanted his engine blown too. So it was onto the internet and a small AMR300 supercharger was ordered and on its way from Japan. 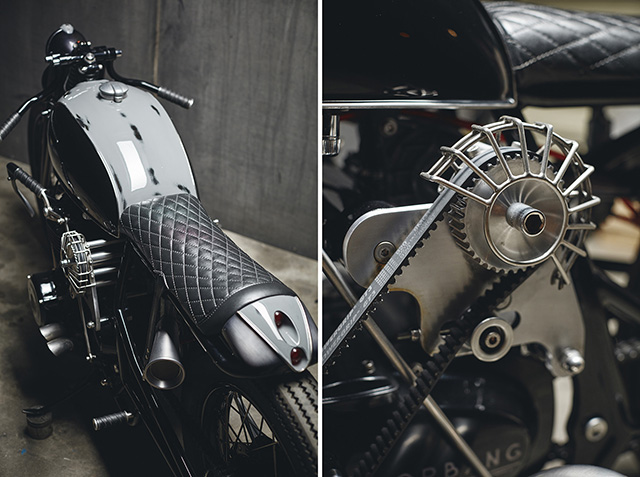 Doing the sums Justin worked out the engine could handle 3-5psi safely and set about building, machining and fabricating all the parts necessary to make it fit. There is simply too much to detail, but the highlights include the custom built intake, twin rear facing Wassell concentric carbs with their own hand machined velocity stacks and the one-off rotor and pulley system that steps the rotor and alternator out 20mm. While the drag style zoomie headers deliver the top fuel look and sound. 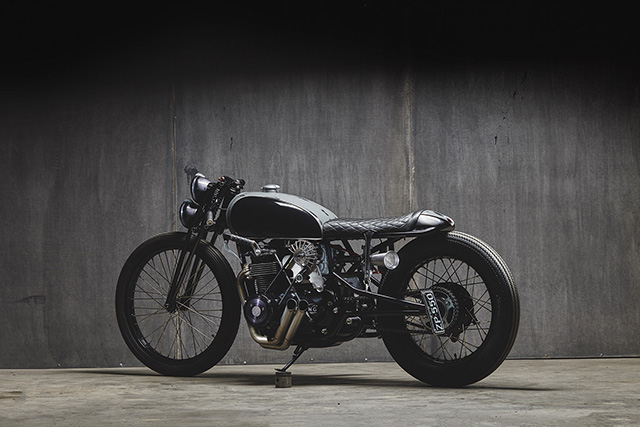 But this is not an off the shelf kit and anytime you do something this complicated for the first time there will be hurdles. The insufficient fuel supply was rectified with a Harley style high flow fuel tap and 5/16 line. While the poor charging being received by the small Antigravity 4 cell battery saw Justin go for an old school solution, retrofitting a Lucas 2 wire alternator and rotor. Providing the spark is a Dynatek ignition which hides away with the rest of the electrics in the flush mount tray under the custom seat upholstered by Timeless AutoTrim. 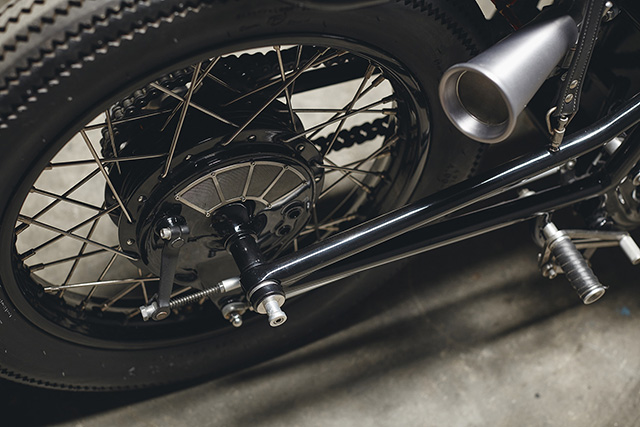 The awesome board track style handlebars have two vintage Unity spotlights in front of them, but with the inverted levers the clutch cable kept snapping. The solution, Aaron wanted a suicide shifter and that’s exactly what he got. The 21in front rim gives the bike a real old school presence and with each challenge and out there idea Aaron thought up; Justin found a solution that you’d expect to find from an old world master craftsman. Kicked into life ZP550 had its first run on a small airstrip in the hinterland of northern NSW. “The sound through the valley was unreal” Justin smiles, adding “All in all, it’s a super fun bike to ride. Scary… but fun” and finally thanks to PopBang Classics Aaron got his California Dream. 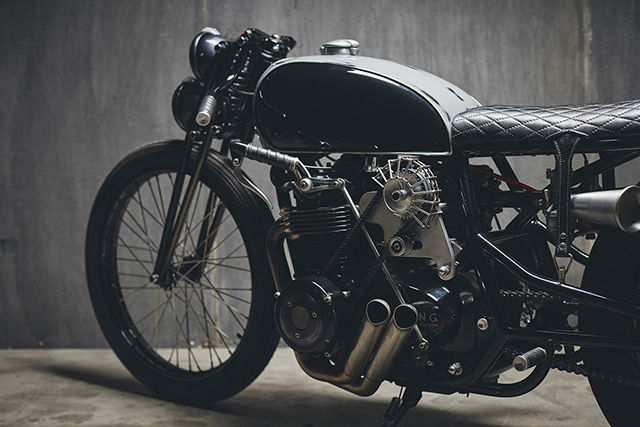 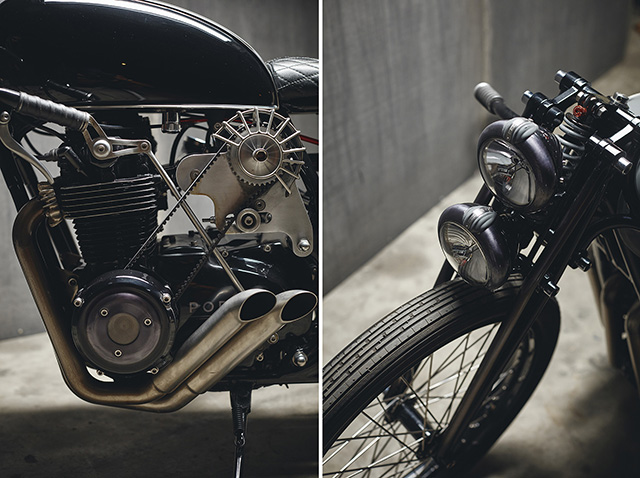 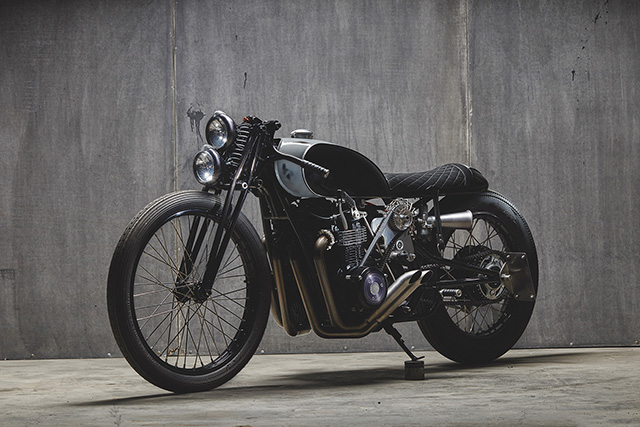