On the edge of a crystal clear lake, with its stunning historic buildings and sweeping views of the Alps, Thun, Switzerland is a popular place to visit. “Scooter bikes can be rented for the trip back down to the valley if you’re feeling adventurous,” enthuses the local tourism website. Boring! Instead, be like Sam Luginbühl and bring the hills alive with the sound of a rip snorting two-stroke! The proprietor of his own all-round metal fabrication and Hot Rod business, Sam Customs, he’s spent the past five years in his downtime piecing together this killer KTM GS250 with looks that are as good as it goes. With the mountains rising around him in every direction, it’s no surprise to learn the 31 year old spends a good amount of his time outside riding all kinds of two wheels; from BMX, mountain bikes to motocross. But as a metal worker since he left school, when he’s inside he can usually be found in his small workshop creating superbly crafted parts and full-blown custom cars and bikes for his customers. Bought five years ago the 1978 model KTM has had to wait its turn with other award-winning bikes and the stunning ’55 Chev shop truck ahead in the production line. 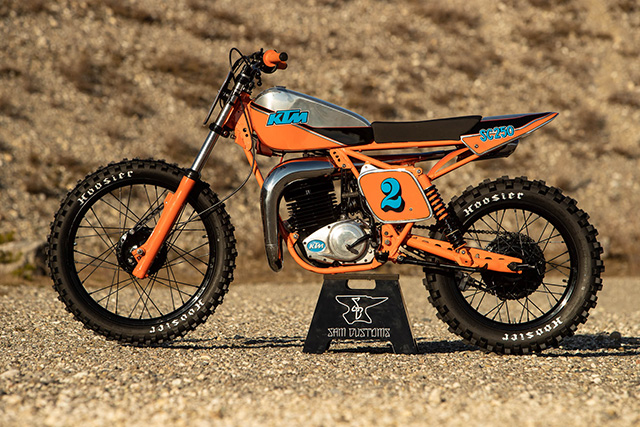 The time, however, has enabled Sam to collect the right bits and pieces and hone in on the exact look he was going for. “The idea was to build a bike that is looking cool, classic old school but combined with the style and the thinner lines from a modern MX bike,” Sam explains. To get that narrow look the frame needed to undergo some extensive modifications, with the supports around the backbone sectioned and re-welded. While the typically messy factory subframe has been given a complete overhaul with cleaner looks and a linear up curve. 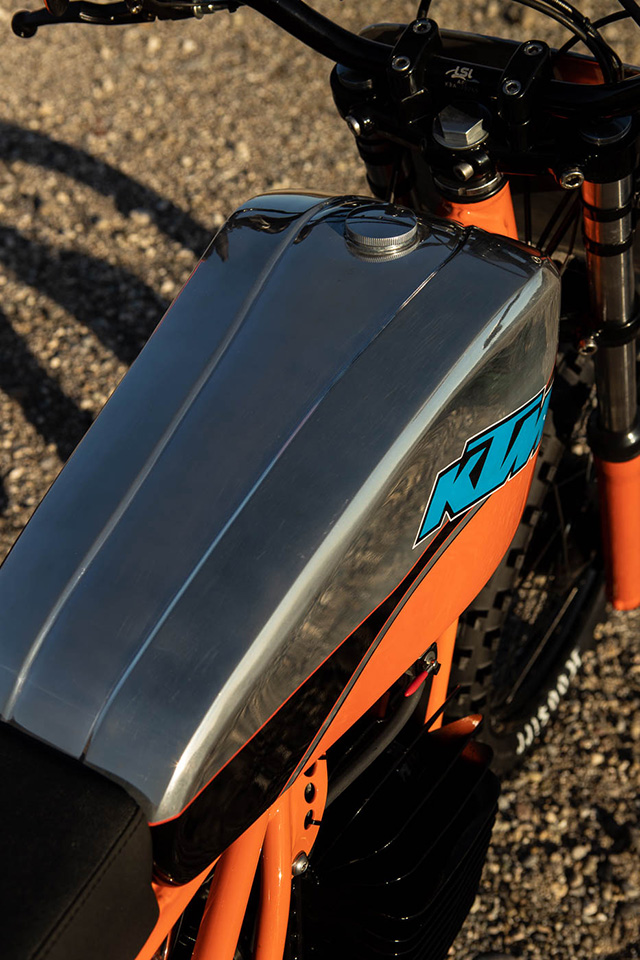 Now Sam could focus on doing what he does best, metalwork, and the entire body is hand fabricated from sheets of aluminium. Keeping the VMX look the boxy lines are offset by beautifully curved transitions with the welds nowhere to be seen. The top of the tank features neat bead work to break up the single panel, while a filler cap has been flawlessly integrated. Moving rearward the tailpiece is shaped to complement both the new tank and the lines of the frame. Beneath a hand-rolled guard catches any mud coming off the tyre without disturbing the looks. 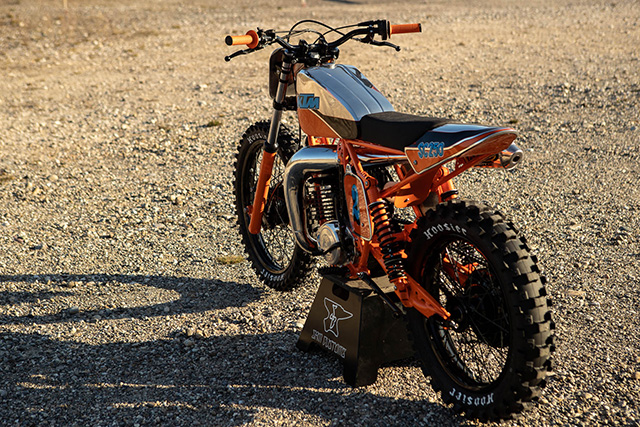 The three number boards, one for the front and the two side pieces with integrated mounting tabs are all hand made and designed in the classic shape. But throughout the build Sam still wasn’t sure what he’d do for the colour palette and how he’d get the match between old and new, just right. That was until he met “Chiko the great pinstriper from Germany, Chikos pinstriping”. Between the pair, they came up with the perfect mix, a muted version of KTM’s orange with blue and black graphics and plenty of exposed polished alloy to show off Sam’s skill. 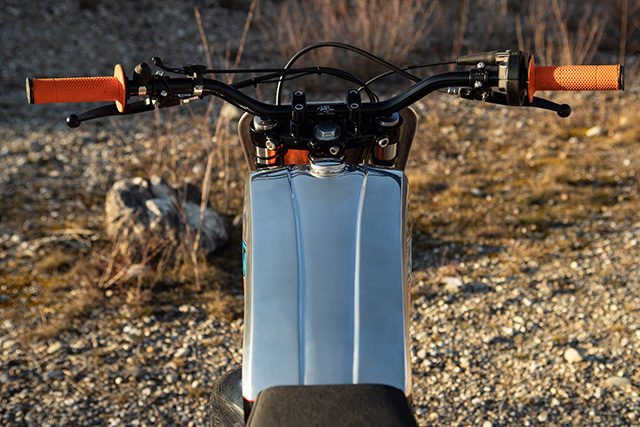 The bike was looking great but the heart of any two-stroke is the engine and lucky for Sam his friend and co-worker Alain Teuscher knows how to spin the spanners. The spec sheet of the old KTM belies the anger of the little 250cc engine when the torque is in the sweet spot. But to get it there Alain treated it to a full rebuild and took care of the details like overhauling the carb and making sure the ignition side of things was working perfectly. Before it’s finished out with a coat of high heat black paint and polished covers. 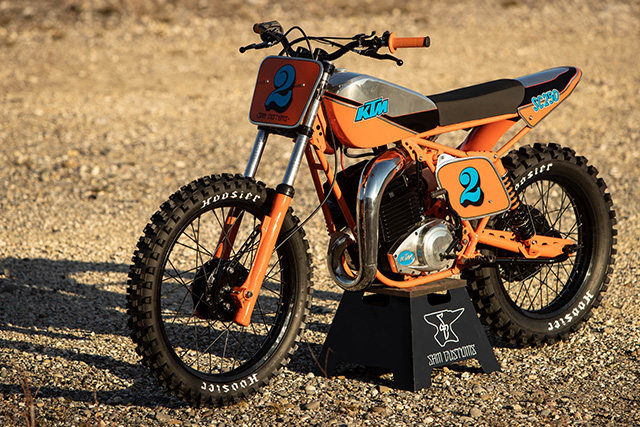 But not everything went as smoothly, wanting to keep the exhaust the bike came with, Sam had to deal with the endless rust holes it was sporting. So each piece of the pipe and chamber that had metal cancer was cut out, repaired and then welded back into place. Before the whole thing was given a mirror like polish and fitted out with an FMF end can. While it’s all fired up with a new kickstart on the left-hand side like many a Euro dirt bike of old. 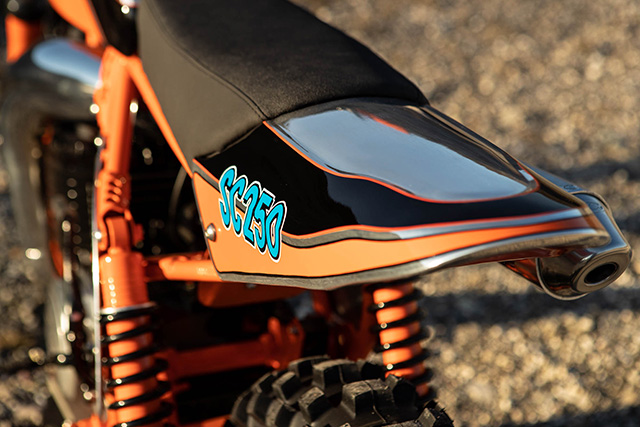 Controls are kept to a minimum, with orange grips mounted on the new bars that also sports a quick action throttle and new levers. The suspension and brakes have all been overhauled and brought back to factory specs, with the re-spoked rims wrapped up in aggressive Hoosier rubber. “After hundreds of hours the bike was done and I’m so happy with it!” Sam smiles. “It was way more intensive than I was expecting at the beginning!” But all the hard work was worth it as he disappears into the crisp clear air of the Alps aboard one of the best looking VMX builds you’re ever likely to lay your eyes on. 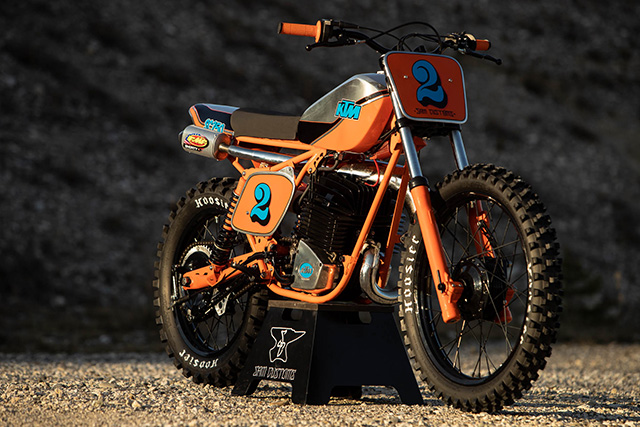 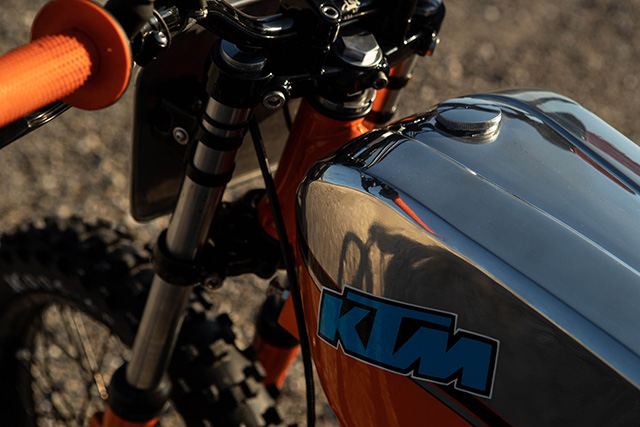 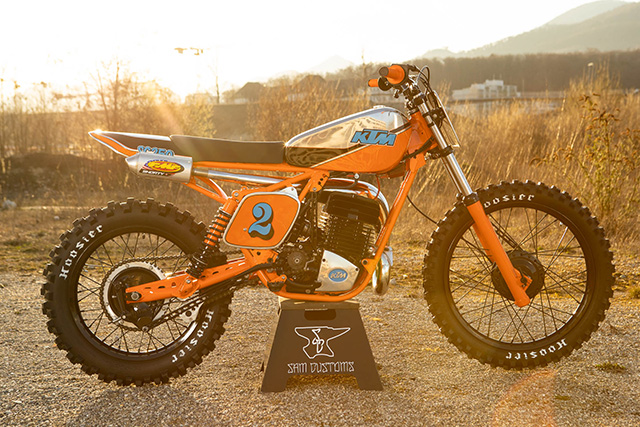 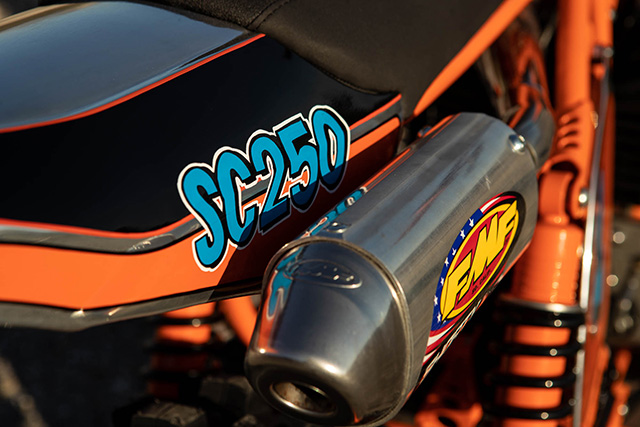 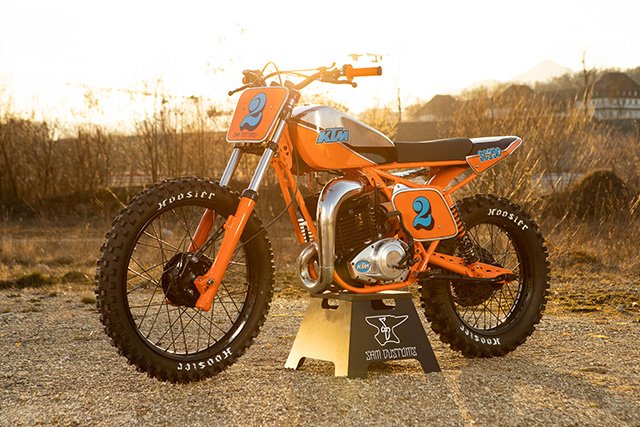