Words and video by Tom from Purpose Built Moto.

If you’ve been following this build series, you’ve noticed I’ve mentioned a few times that the two adventure scramblers I’m building at the moment, a Nemesis 400 and the Harley Sportster are for an upcoming film project. I’m happy to announce that the official Instagram for the film is now live! @wideofthemarkmovie. After the success of our first film “Handcrafted” produced in collaboration with Electric Bubble we’ve decided to go bigger, better and way f**king out there. Go and check out the instagram to keep up with the project. Ok, now on with the important stuff. 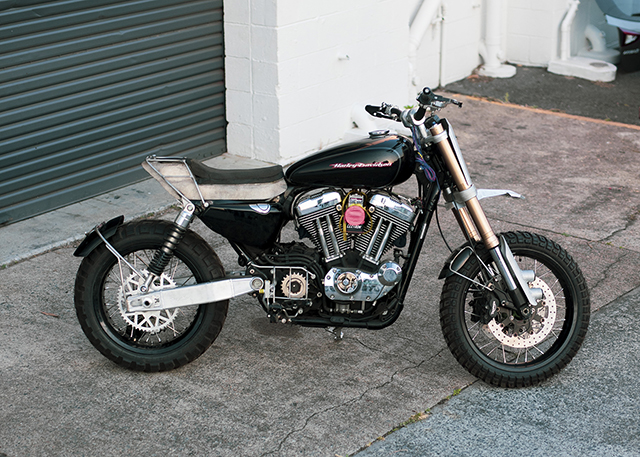 In this instalment of the scrambler build we show you:

It’s a difficult thing building a bike in front of a camera, but bear with me as we stumble through! 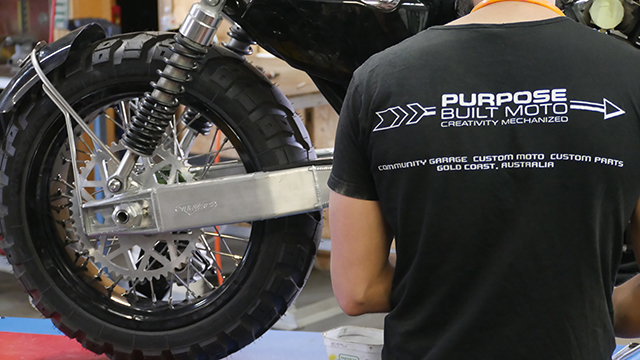 Tracker tails are usually for two things – looks and weight saving. This one however, has a twist. It will also serve to support my baggage strapped to the back, with a good amount of storage. I’ve achieved this by lifting the seat from the frame about 40mm, and boxing in the tail section at the rear. 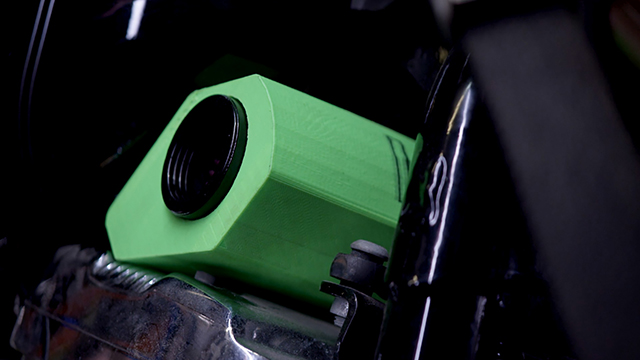 Boxing the tail in I marked out my mounting points and templated the cover on some cardboard before transferring it to a 2.5mm thick aluminium sheet that was trimmed and shaped to suit the contours of the frame. There’s more to come on this, but we need to get some other things done first. 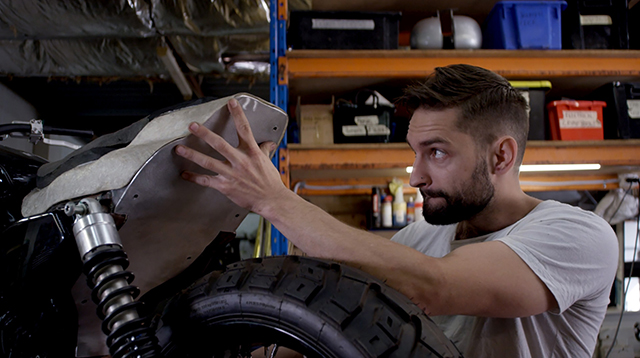 Nothing says I’m building a Dirt Bike quite like a fat aluminium swing arm bolted to a heavy American V-twin. The Trac dynamics swinger is a real piece of eye candy on the sportster build. It also serves as the mounting point for the bikes tail tidy and rear fender. 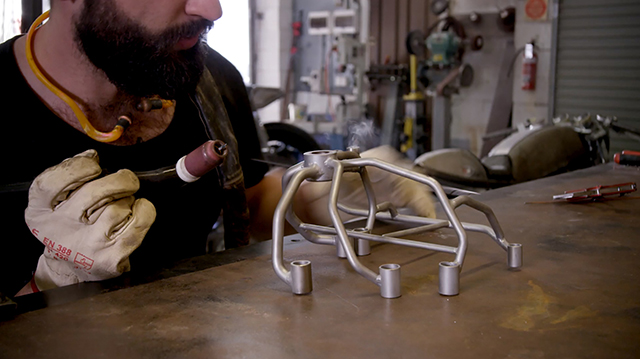 Using an off cut from a Triumph Bonneville rear guard, my tig welder, a cheap but super handy tube bender and my trusty oxy torch I put together a strong, small fender mount to stop roost from hitting my ride buddies when I crack open that Lectron Carb that the sportster will be breathing through. Because I’m a bloody nice guy, that’s why. 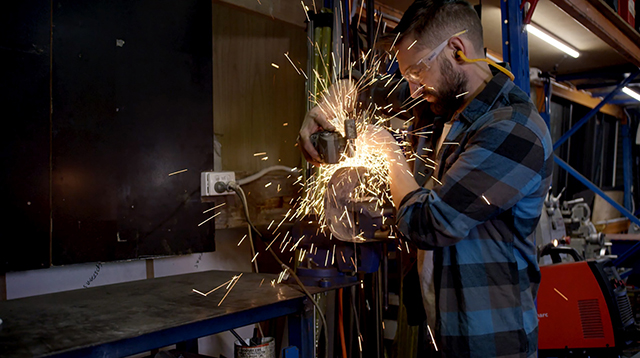 Next job is fabricating a set of foot peg mounts. I have a few different sets of parts I’m building with here. Some PBM stainless steel fabrication bungs a set of Free spirits parts shift and brake levers and some British customs off road pegs. With some creative… problem solving? I was able to modify some Triumph foot peg brackets, and mount them onto the sportster cases in what ended up like the peg mount version of the demogorgan from Stranger Things. Regardless of how you think it looks, I reckon its rad, and its strong as fuck. So there ya go. 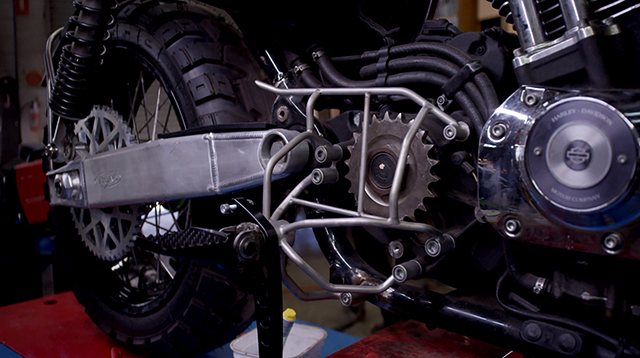 While welding a set of threads to the frame for bag racks/sissy bar mount, re-locating the coil and fitting up the Lectron carburettor, I started dreaming about the airbox idea I’ve been toying with. Having the air filter sat out the side of the motor I’ve seen a heap of offroad sportsters having issues getting instantly clogged up on the intake. My idea to help that situation is to fabricate an airbox that will sit where the old coil mount was. DNA performance filters to the rescue, I’m pretty psyched to see how this turns out. 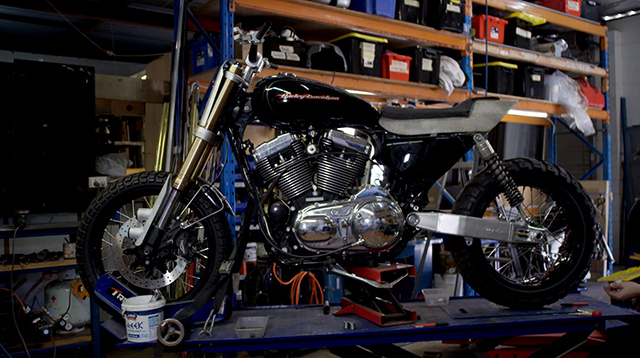 Last job is fitting a bit of jewellery to my Pro Taper Outlaw tracker bars. ISR master cylinders and Clutch lever, a pair of 3 button Purpose Built Moto switches and a set of a great little product I recently found. West slider lever protectors form Moto Products Australia. I’m going to see how they go at protecting my levers when I bin the sporty off road. They’re a strong looking billet designed part that I’m hoping will limit the damage done to my levers when I drop the bike.

That will finish up part 3 on the Adventure Sportster Scrambler. Thanks for taking a minute to get the lowdown on the second ever personal build I’ve done. Make sure you subscribe to The Purpose Built Moto YouTube Channel so you don’t miss the next one. 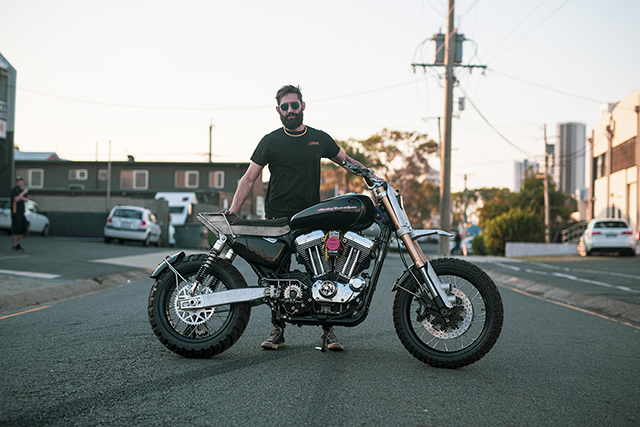