DEVIL IS IN THE DETAIL: Yamaha XV750 by Purpose Built Moto 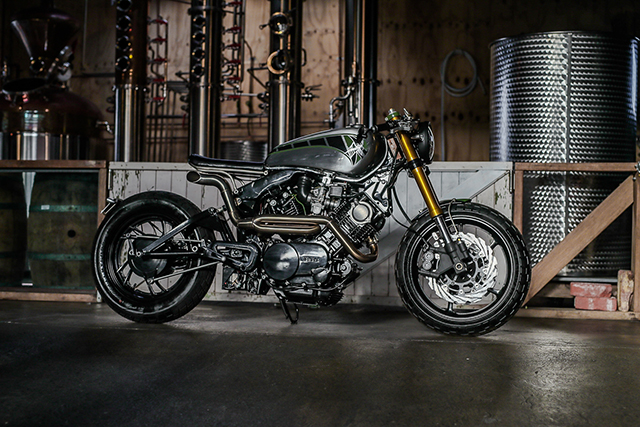 They say the devil is in the detail, and it is this aspect that separates the best from the rest amongst the thousands of custom bikes built every year. The ability to incorporate form and function into every aspect of a bike and yet still stay true to a cohesive design is rare. It’s here that Tom Gilroy shines and combined with his customer friendly approach has lifted him to the upper echelons of Australian bike building. Now the Purpose Built Moto head honcho is leaving 2019 the way he started, with a flurry of exceptional builds rolling out of his workshop, and his latest is this stunning Yamaha XV750. 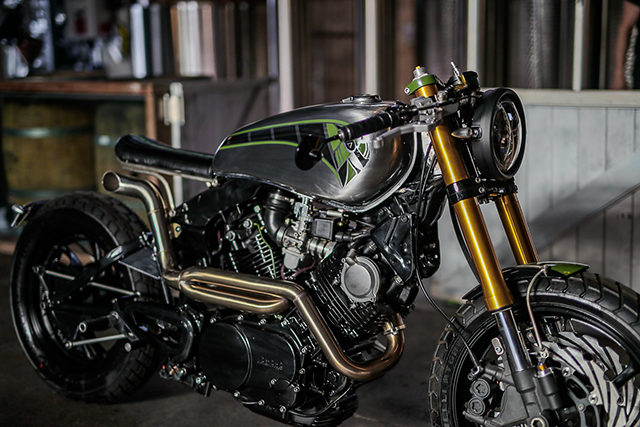 The bike’s owner James had begun to modify the XV himself when along the way he decided to seek out Tom’s help to really do it justice. “He came into the garage with a tonne of ideas on how this bike could take shape. I simplified the ideas down to a very, very basic direction. I figured out from his description the bike needed to be sharp, lean and edgy. That’s about all I ever take to work with; the rest I leave up to the process,” Tom explains. The ultimate goal being a bike that performed brilliantly in the mountains and looked just as good parked up in the man cave. 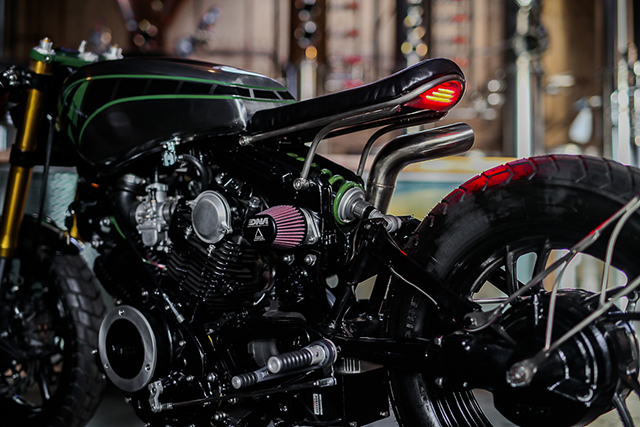 Now with the Yamaha in his shop, the philosophy behind the build started to take shape in Tom’s mind. Raw, a visceral, sensory overload. Slim, the Japanese v-twin lines maintained front to back. Manga style, bold, aggressive and a little cartoonish, just like the bad guys would ride. But none of that can be sacrificed for function and as the bike had already been fitted with the R6 front end, Tom wasn’t happy with the way it had changed the bikes geometry. So it’s been rebuilt and raised internally by 30mm to make sure the modern forks are just right for the XV. 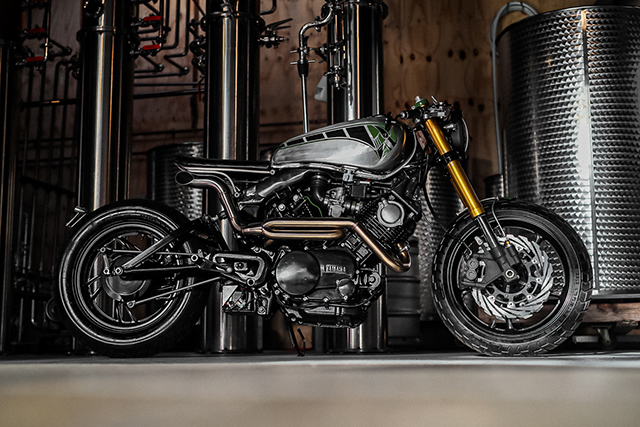 With the Yamaha sporting its unique, hidden in the frame, mono-shock design it was over to Ride Dynamics who built a custom unit just for this build. Back at the front, the benefit of the modern forks is their radial mounted calipers and the big discs have been replaced by a set from Yana Shiki for improved stopping power and reduced unsprung weight. For tyres a set of Pirelli MT-60s is selected in a 17” front for the R6 wheel and 16” at the back end that’s slung over the stock rear with a perfectly refurbished hub and brake assembly. 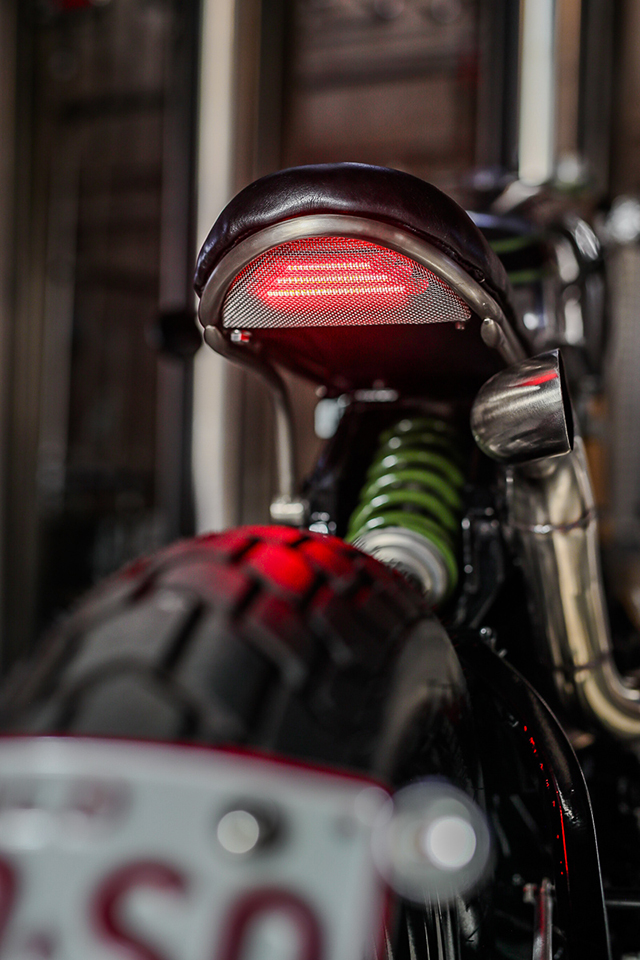 “Having the bike sitting how I wanted it, the tank was re-mounted after some modification to the rear section. Then mounts welded onto the frame for the soon to be subframe,” Tom tells us. At the same time as he was crafting the XV he’d be playing around with solid bar. So using his oxy torch, a vice and some muscle, the 10mm round bar was shaped into the seat frame. Front fenders are usually just for function, but this piece with round bar struts is a work of art. With the number plate hanger just as impressive and keeping the under-seat space clean and uncluttered. 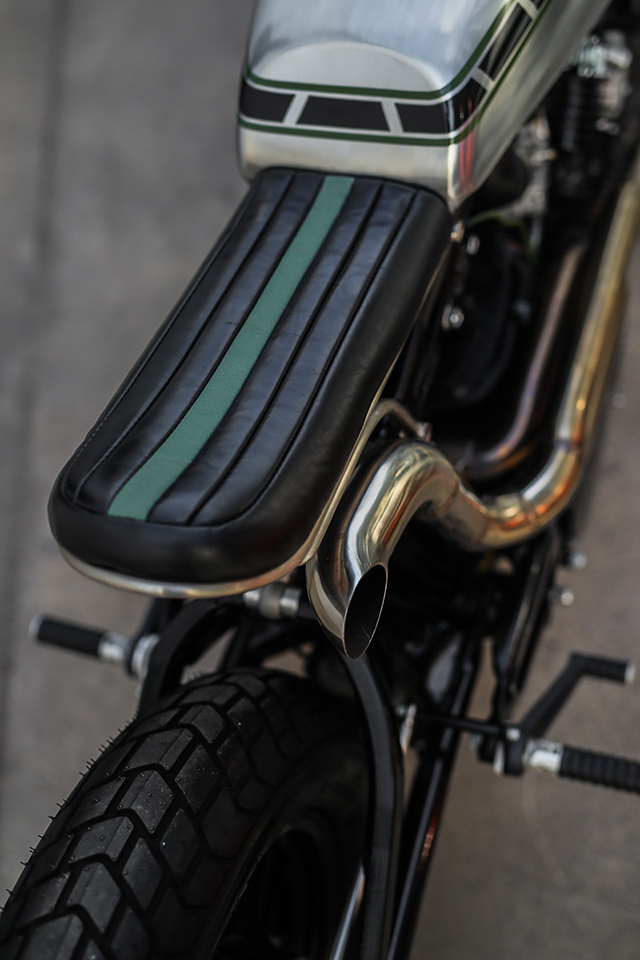 The seat itself is wrapped in leather with a linear pattern upholstered in to accentuate the narrow lines and a military green panel to match the paint. The design for which came about through many of Tom’s ideas that were finally sketched up by a friend. Then it was time to lay down the colour with the graphics a stunning mix of a Samurai helmet, the shop logo and Yamaha’s Speedblocks. With the green also applied to areas of the bike like the top clamp and contrasted with nickel plating and hand brushed metal. 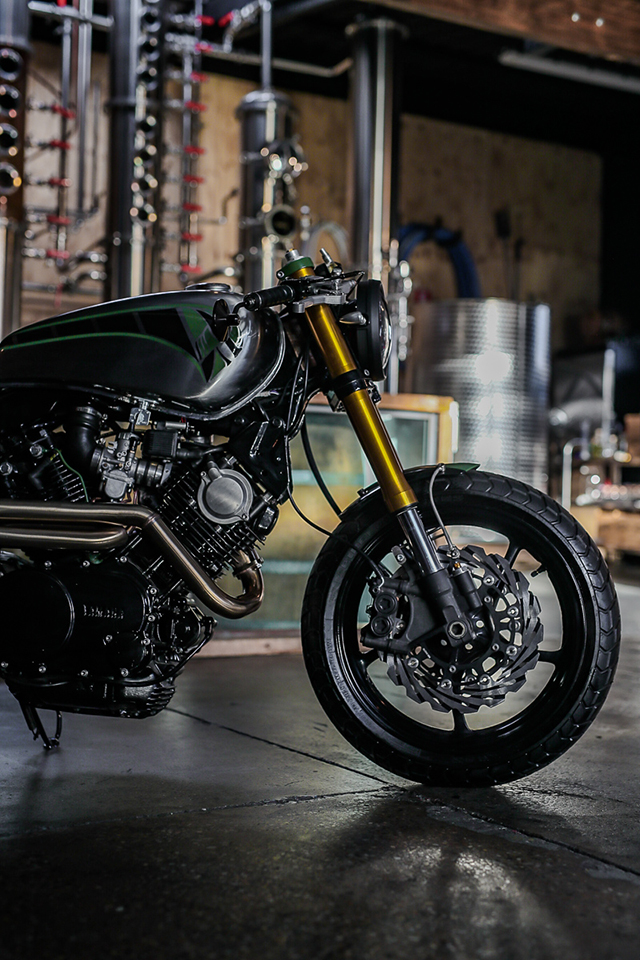 The V-Twin engine is handled just as well as the rest of the build with the stock airbox ditched and a one off DNA X Purpose Built Moto pod filter doing the breathing. This feeds into a set of upgraded Mikuni round slide carburetors, but it’s that beautiful 2into1 stainless steel exhaust with perfect welds and internal baffles for an ultra-clean look that really steals the show! “The bulk of the electrics was built into a box under the swingarm, housing the battery, fuses and starter relay. Any remaining items were hidden between the tank and backbone of the frame.” 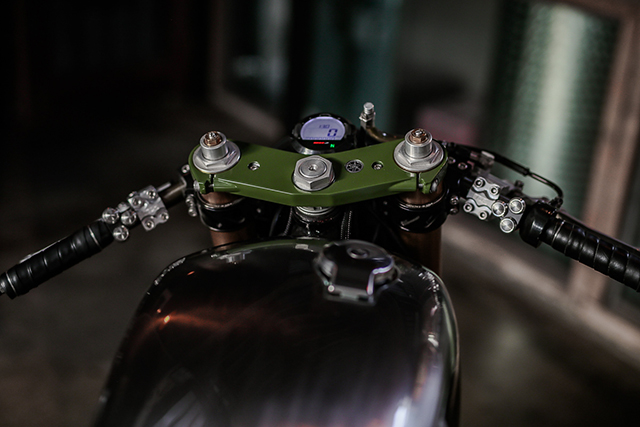 The functionality of the bike retains smart thinking and brilliant looks throughout; a custom rear light enclosure using sheet metal, LED strips and stainless steel mesh is a brilliant touch. While at the front the Flashpoint headlight, Koso digital dash and indicators are mounted on an all in one piece. 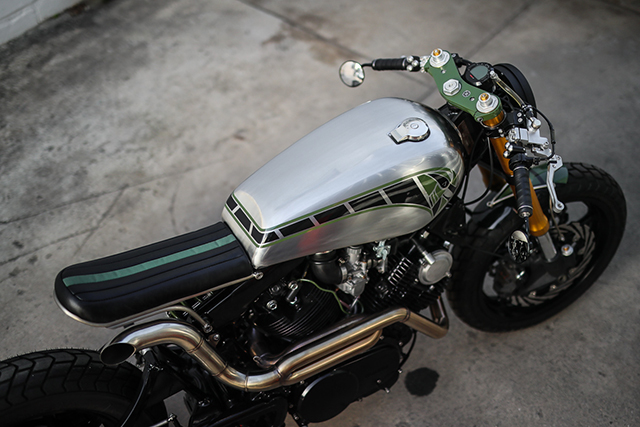 The clip-ons and rearsets ensure the controls are high end and trick parts like ISR clutch and brake levers and a set of premium 3 button switches mean there is nothing of low quality throughout the build. With such a brilliant bike done Tom could put his feet up for the year, but PBM has much more to come for 2019 and with no two bikes ever the same we can’t wait to see what they create next. 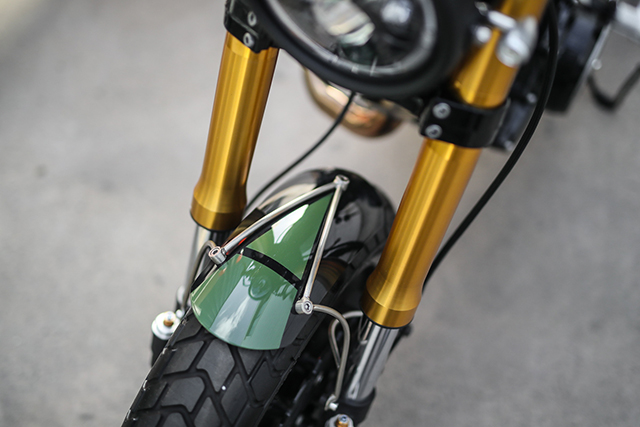 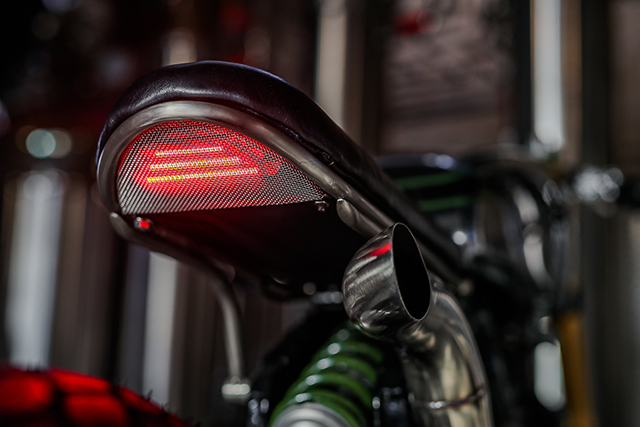 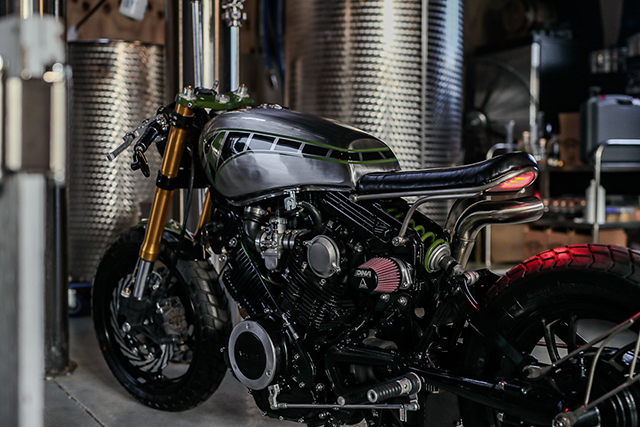 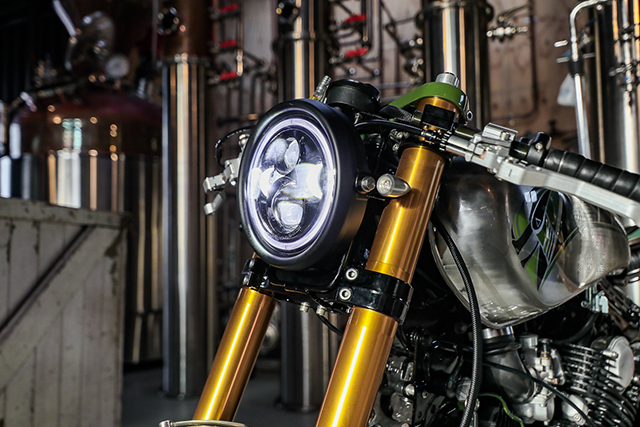 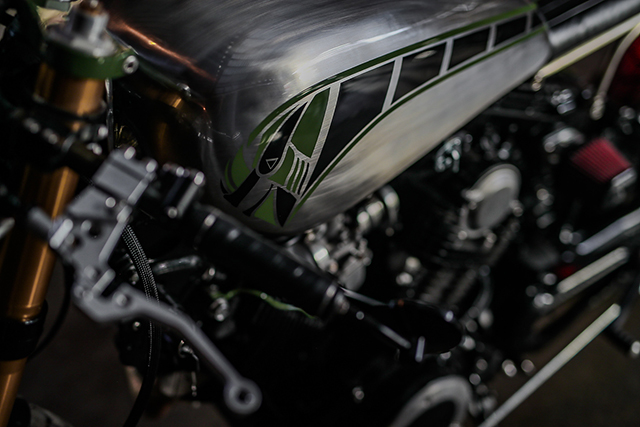 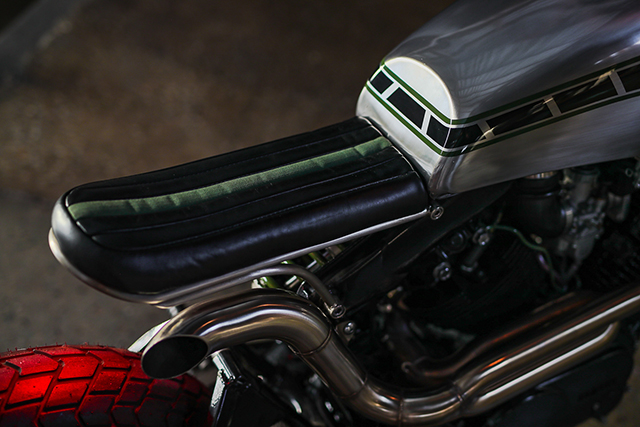 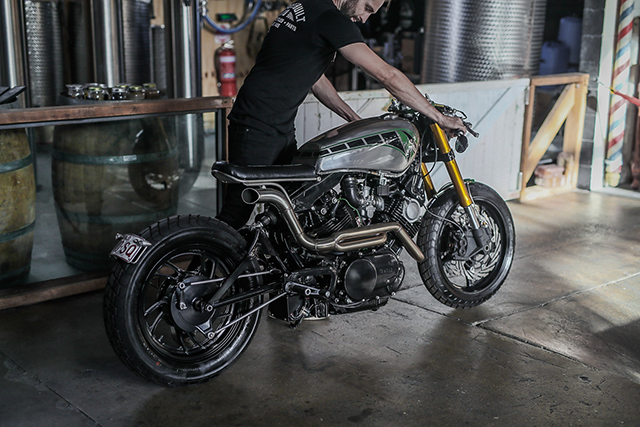