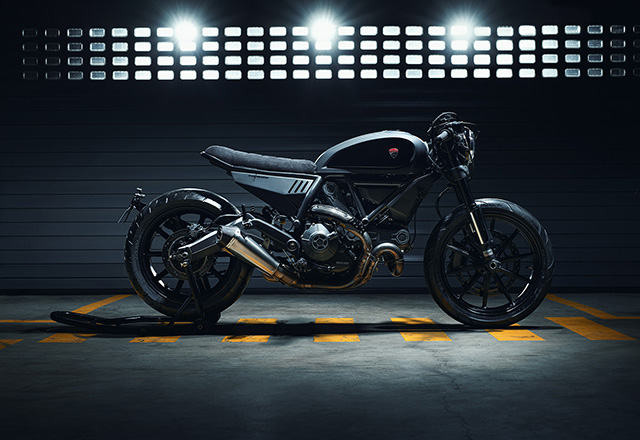 2019 has been a tough year for those facing wildfires, from Europe to Australia’s East Coast, California to the vast Amazon jungle, the devastation has been immense. But while many of us live in harms way, when it’s time to flee there is another group heading towards the flames. The brave men and women of the world’s fire fighting community are truly owed a debt of gratitude. But what do they do to wind down when it’s all over? For Germany’s Chris Scholtka his life long passion for bikes provides the escape and from his Motocrew workshop in his spare time he’s turn out this ‘Black Villain’ beast from the bones of a 2015 Ducati Scrambler. 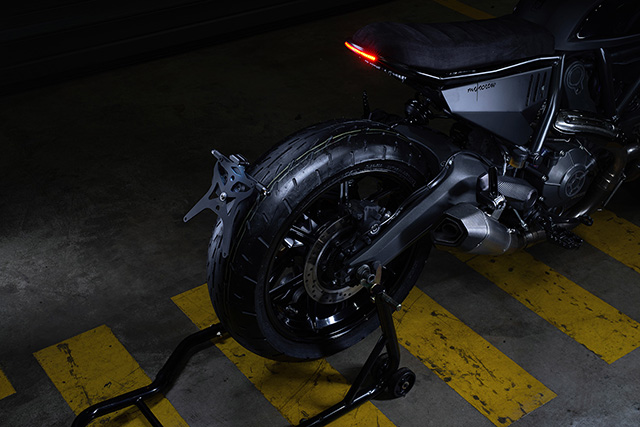 Chris started his journey in motorcycles before he was even old enough for school, racing motocross at just five years old. Turns out he can really twist the throttle, going professional on the German circuit before he was 18. However a cruel crash ended his career with a broken neck and thankfully he’d eventually heal. But looking for a new path in life he signed up to serve his community as a firefighter in the town of Cottbus, between Berlin and Dresden. “ I love my job, but I needed to do some handcrafted things in between and this is why I build bikes!” smiles Chris. 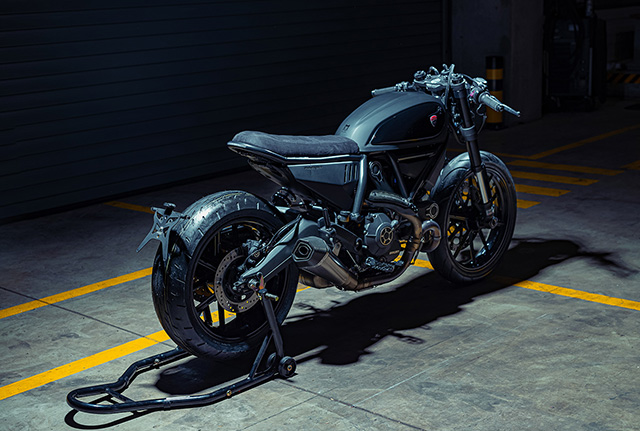 Turns out like everything else he does, he’s got a serious skill for bike building and four years ago the Motocrew was formed. Inspired by the likes of Hookie Co. & Vagabund Moto, crisp clean customs is what he loves to create. With some stunning builds under his belt, a client turned up with a request, to take his 2015 Ducati Scrambler Icon 800 in ’62 Yellow and turn it to the dark side! The factory hue is anything but, so immediately Chris knew the direction had to be bad and black, hence the bikes name. 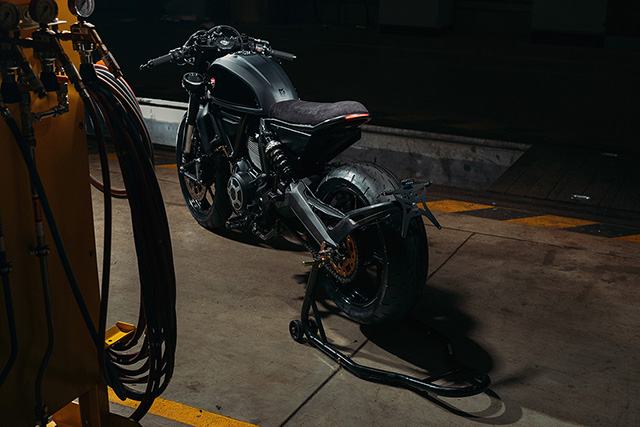 Stripped out of its factory clothes and while the yellow was gone the big subframe to support the stock scrambler seat was still dominating. So no stranger to sparks Chris whizzed the angle grinder into life and had it all cut back in no time. Next he fabbed up a new section, that includes an integrated LED light to maintain the clean lines and it was all welded into place. This meant the plastic under tray needed to be trimmed back and cleaned up. Before it was all topped in a generously padded and neatly stitched Alcantara style seat. 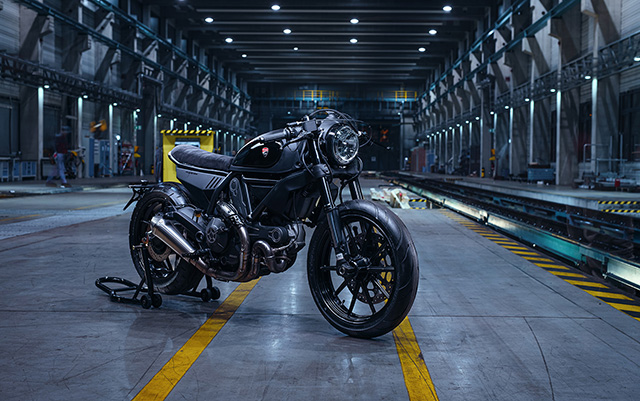 Next up the factory tank was removed and the supports for the stock seat that were now protruding were ground back and tidied up. Before the whole thing was relieved of the factory yellow paint work and the aluminium side covers prepared for paint. But before the gun was waved Chris bent up a set of all new side covers to fill the void and used a laser cutter to add the vents and Motocrew logo. The dark matte grey with gloss black accents is splashed across the bike, from the tank to the triple clamps and everywhere in between. 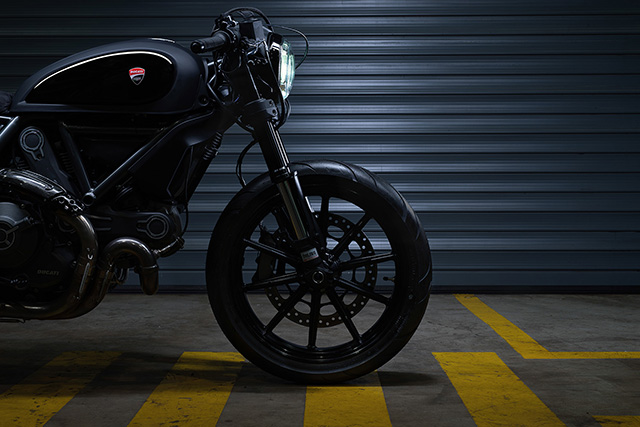 The factory suspension is more than adequate with Ducati drafting in Kayaba to work their magic. But nothing says quality suspension like Ohlins and with the NIX 30 front cartridge kit coming in black and offering full adjustability, Chris had to fit them! With the big O also offering a matching rear shock with a black spring it was a no-brainer and provides the ultimate in street tuned suspension for the Scrambler. The rubber is supplied by Shinko, the sticky r003’s requiring a letter from the company themselves to get the German street legal stamp of approval. 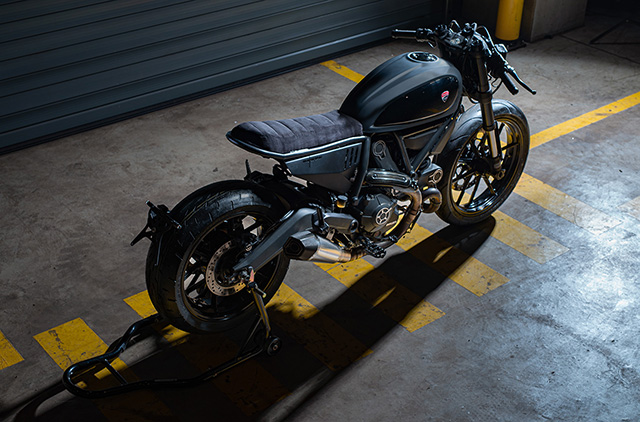 As the full model designation suggests, the engine is 800cc of Ducati air-cooled, 2 valve, L-Twin fun for a traditional feel. But high compression and modern fueling means it’s more usable than those of old, but that doesn’t mean you can’t add some fun. Flipping through some catalogues Chris came across the REMUS Hypercone system and along with a carbon cover it looks a treat! With the reflashed ECU to suit there is more power and a great sound every time the quick action throttle is cracked. 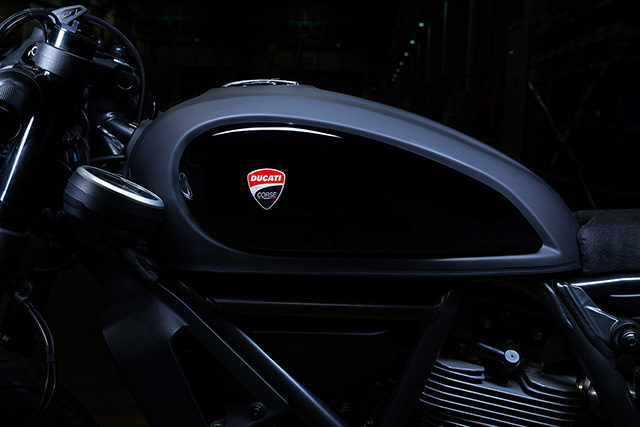 To help clean up the lines for the slick finish he’s always after, Chris then set about relocating the speedo to the side of the bike. Then a rewire with Motogadget components was undertaken, at the rear this means adding the m-Blaze pin indicators to the numberplate holder. While upfront a set of 3D printed supports holds a set of flashers and affixing a set of genuine Ducati badges had the build complete. Without going over the top in any one area, our fearless firefighter has given his client exactly what he desired. A stripped down street warrior that’s bad in black and does everything at its best. 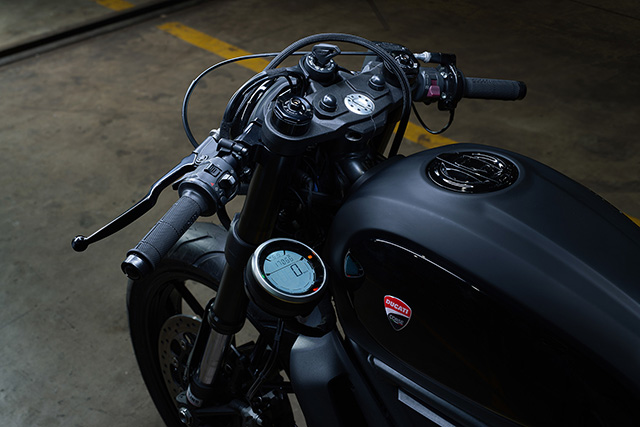 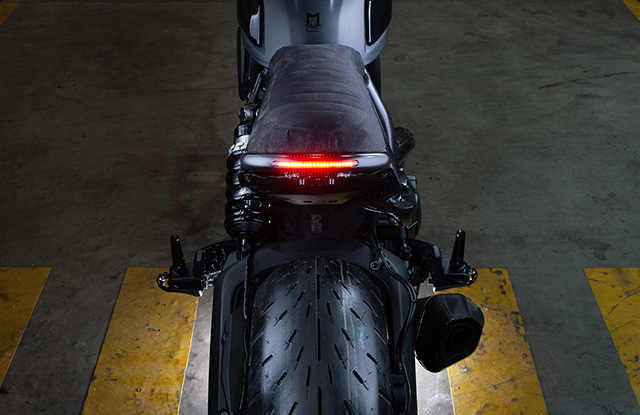 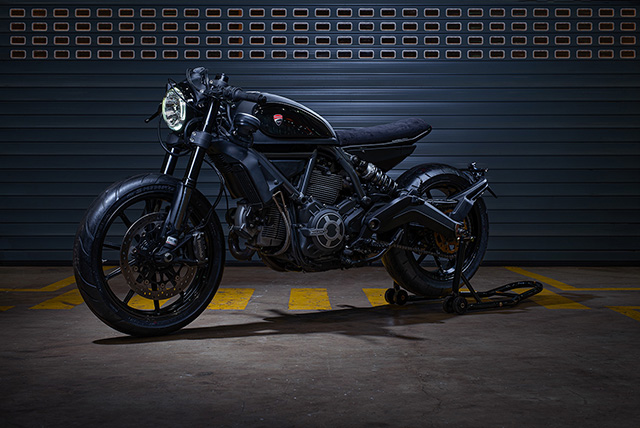 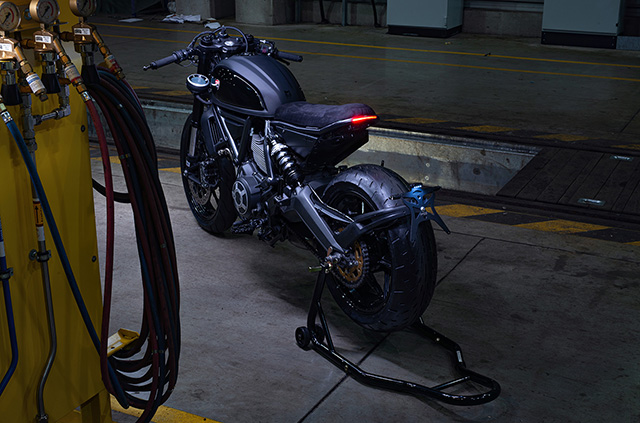 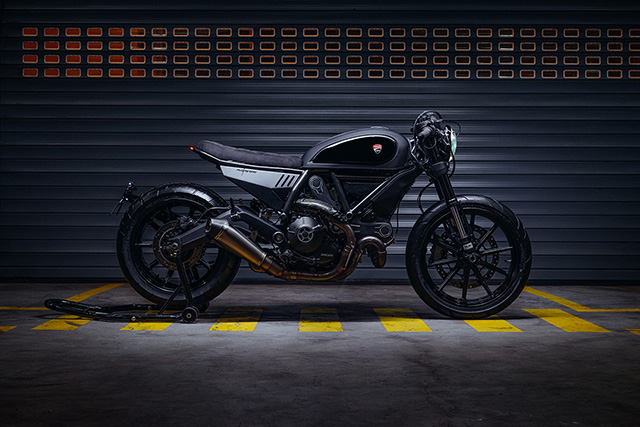 FAST & LEFT OF FIELD: ‘Have Fun Flat Track’ in Japan
2019 PIPEBURN BIKE OF THE YEAR AWARD