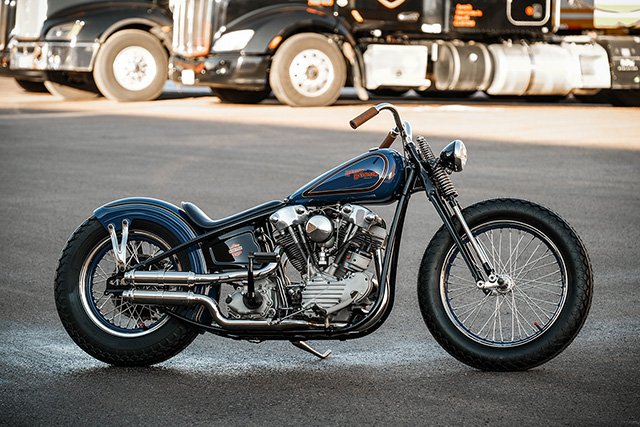 When you get invited to take your bike to Germany to compete in the AMD World Championship of custom bike building, you know you have created something special. That’s what happened to Jordon Dickson from Union Speed & Style earlier this year. Their beautifully proportioned 1947 Harley-Davidson Knucklehead dubbed the ‘SourKraut’ – a tongue in cheek name based on the local cuisine in Deutschland. Jordan and his team at Union started the build with a simple premise; to build a motorcycle that looked like it could have been a factory race bike from the late 40’s. They also wanted to stick to the Union mantra which is to manufacture and fabricate as much as possible in house using raw materials. 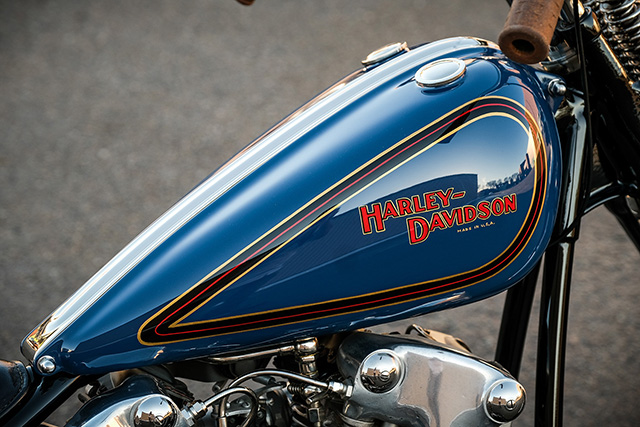 “I’ve always been a fan of early factory race bikes,” Jordan explains. “There’s just something about the stripped down purpose built nature of them that I’ve always gravitated towards. One of Jordan’s favourite vintage race bikes was the Joe Petrali landspeed streamliner knucklehead. “The frame on that bike had nice sweeping lines to it, and that’s where the inspiration for this frame came from. I wanted the frame to still look reminiscent of the original knuckleheads but have some of that sweeping elegance that the Petrali land speed bike has.” 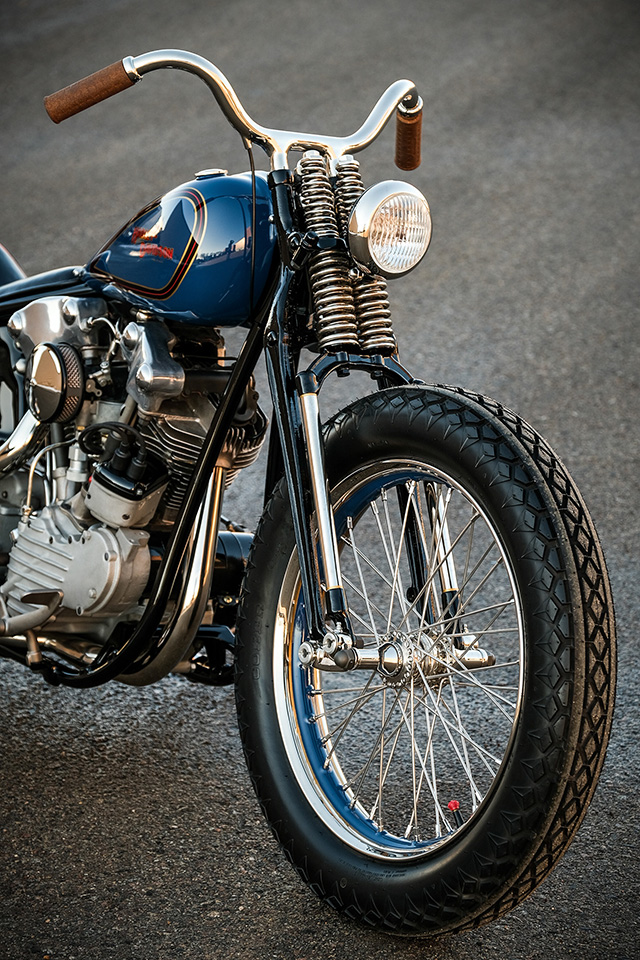 After working out a clear design it was now time to make it happen, starting with fabricating frame. “I started by machining out a steering neck and bending up some tubing,” Jordan explains. “The main sweep and lower radius for the frame by the engine mount were such large radius that I didn’t have standard bender dies to just jam them out quick, so I had to make some bucks and hand bend them. The angle of the down tubes ends up coming into the neck at such a severe angle compared to a factory neck that the best option was to just fabricate a neck to look similar to a factory forging but with all the proper tubing inlet angles to fit what i was doing. So I machined the neck out of about 9 separate pieces and then welded them all together and smoothed them out so we ended up with a seamless piece that could easily be mistaken for a forging when done.” 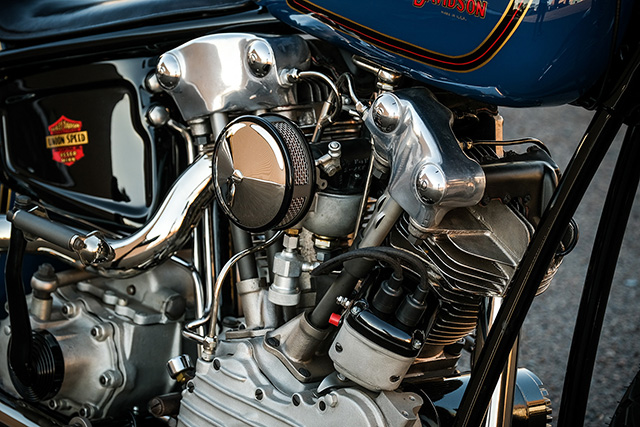 Once the frame was completed it was time to move to the front end. Jordan started with a factory Harley VL fork that needed a fair bit of repair.  “I love the look of the VL fork but for this bike I wanted a narrowed up skinny front end for it. So I cut apart the entire fork assembly and enlisted the help of my wife to draw up some new connecting trees and spring mounts just like the factory pieces but 1″ narrower than stock.  After we had a CAD drawing all ready to go, I sent it off to my buddy Chad Pearson to machine the parts for the fork.” 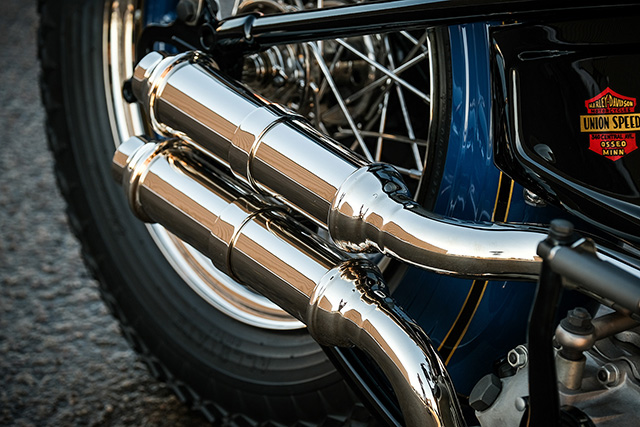 Now Jordan had a complete roller it was time to start hammering out the sheet metal. “In keeping with the era, I wanted the bike to look like it has a set of split tanks with a custom dash piece, but it is in fact a one piece tank.”  Once he had the general shape of the tanks completed, he then started making dies for his Pullmax to hammer the detail shapes into the tank and dash-piece. Next he created a fender which took some inspiration from early Harley tin with “a little bit of Knucklehead and JD styling for inspiration.” 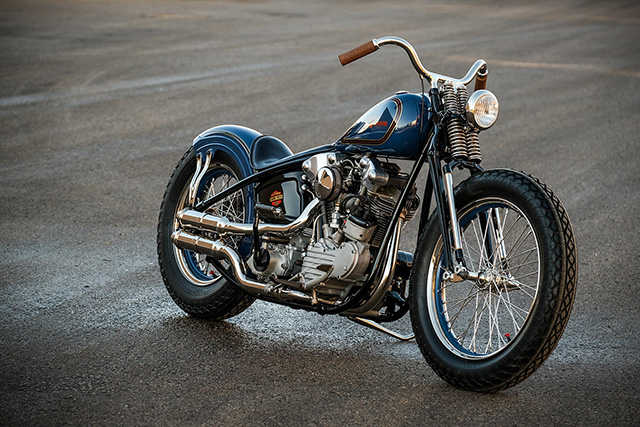 The oil tank design was made to have a vintage HD look, taking the classic Harley horseshoe oil tank silhouette with some extra detail. The foot controls needed to have a factory forged look, so they cut some levers out of 3/8″ plate and then tapered the edges into an ellipse, welded together all of the pieces and textured the final product to pass off as a set of forged pedals. “At this point we were pretty committed to going full nerd, so we machined every single bolt on the bike to have a convex domed head.” 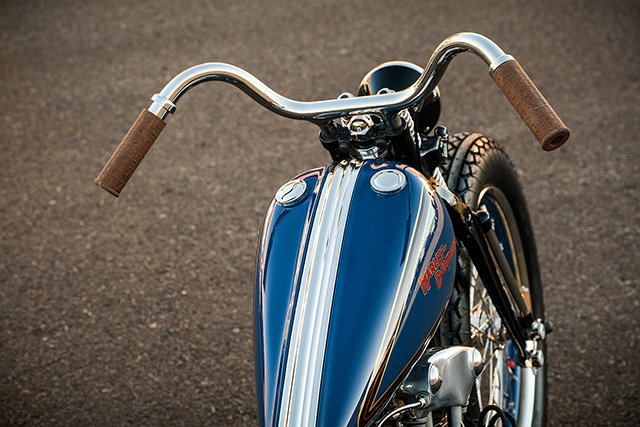 Up front, the beautiful handlebars are of course made in house. Jordan wanted them to have a little bit of hill climber style. “We ran an Exile Cycles internal throttle to keep the bars clean and sanitary and then we machined some radiused ferrules to finish off the ends of the grips.” 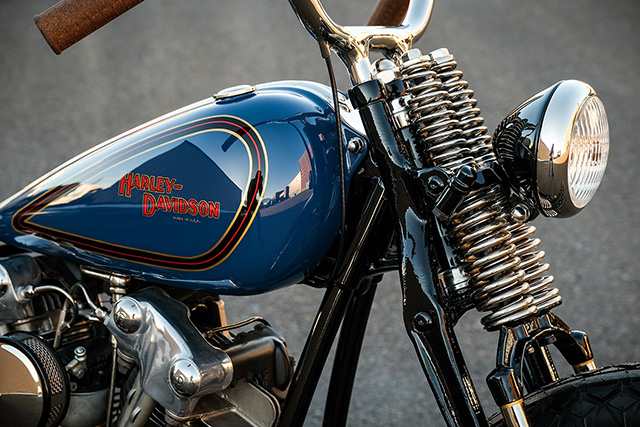 To give the bike a nice bark, the exhaust utilises some knucklehead exhaust domes from their friends at Carl’s Cycle Supply in South Dakota. With some help from his buddy Jake Boyd who helped with the exhaust when we they were pushing it to get the bike done by the looming deadline. 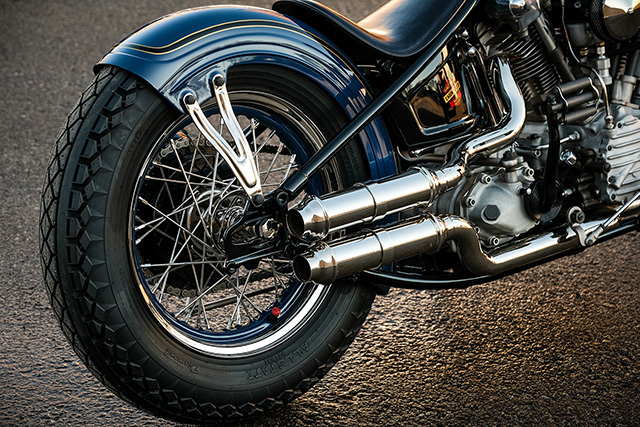 Once all of the fabrication work was completed, it was time to take the bike apart and start everything out for paint and plating. The engine cylinders, heads and foot controls were plated in electroless nickel. The frame, forks, and black bits were sprayed by Mike Stodolka. While the tank, fender paint and hand lettering were handled by Jeremy Pedersen at Relic Kustoms. All of the brightwork on the bike is nickel plating, as well as some polished stainless on a few pieces. The seat leatherwork was taken care of in house at Union Speed and Style. 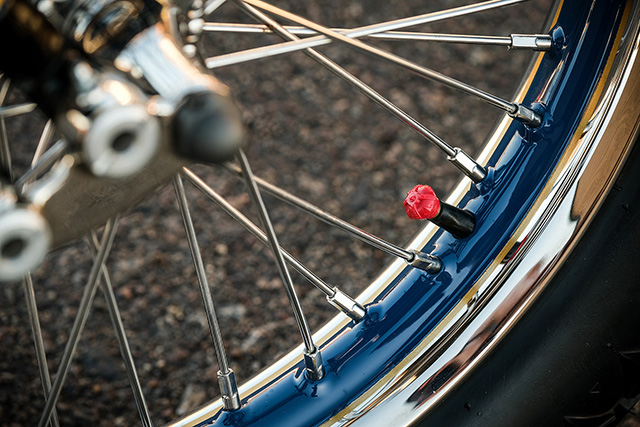 One of the most impressive things is the bike was built after hours and on weekends, while still working on customer projects and maintaining deadlines during usual business hours The finished bike is exactly what they set out to achieve; a beautiful 40’s looking vintage knucklehead racer. In Germany at the AMD Championships, the build got the attention of the judges. They only give out awards to the the top 10 bikes in the freestyle class, and out of 66 competitors from all over the world, the ‘SourKraut’ placed 8th – which was a great result as it was one of the more subtle bike entries (If you’ve seen the AMD bikes you’ll know what we mean). Not only did it kill it at the AMD, it also won the US Championship in the J&P Cycles Ultimate Builder Custom Bike Show at the Progressive International Motorcycle Shows. We look forward to seeing what Jordan and his team at Union come up with next. 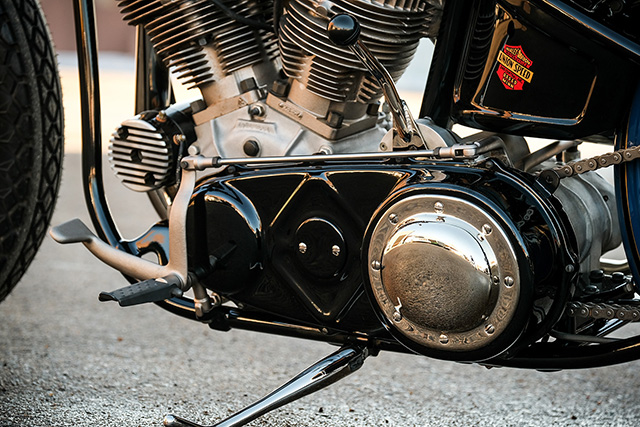 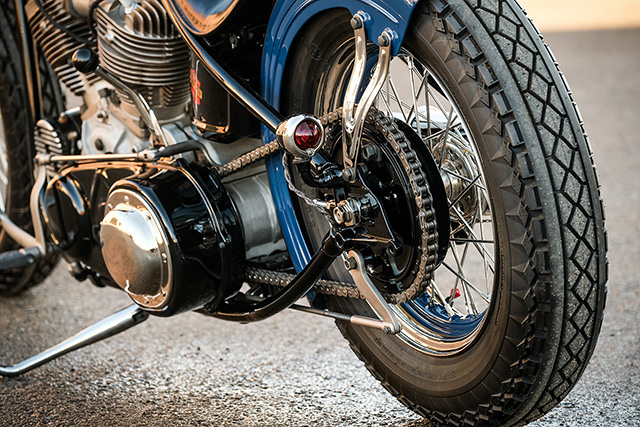 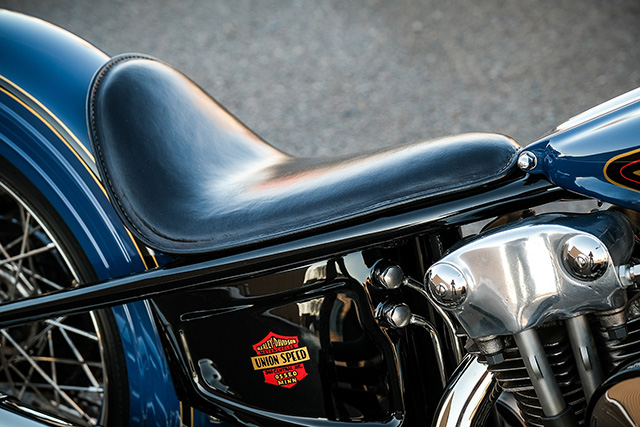 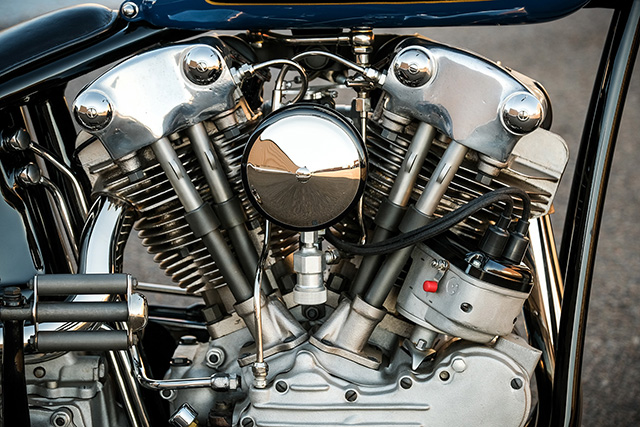 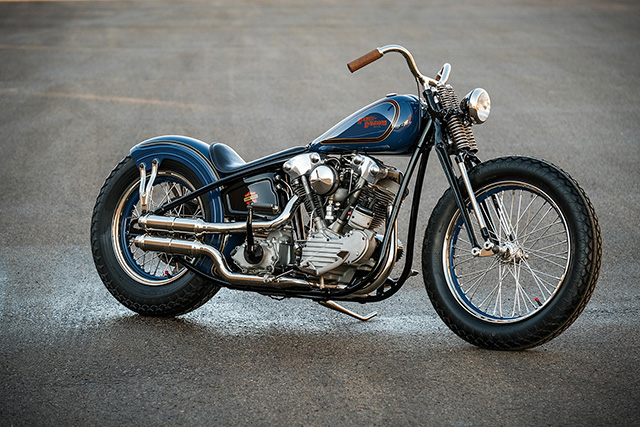