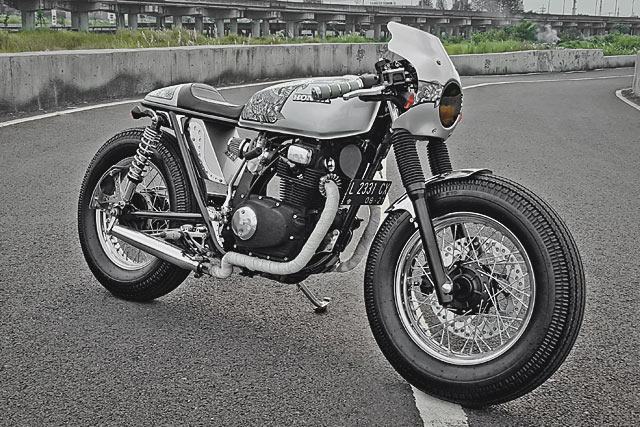 In ancient feudal Japan, a rōnin (or in Japanese, 浪人 – literally meaning ‘wave man’) was a samurai warrior with no master. A samurai usually became ‘masterless’ from the death of his master, or after the loss of his master’s trust. Thus he would be condemned to wander like a wave wanders the ocean. And while the noun has become the stuff of adolescent male fantasy over the past 30 years with visions of mercenary assassins who answer only to themselves, the truth is far more mundane. Rōnin were wanders with no particular place to go; just like how you feel on a great bike ride. So with that thought in mind, Indonesia’s Minority Custom Motorcycles have created their own little wandering soldier; this very Japanese, very sharp ‘76 Honda CB200. 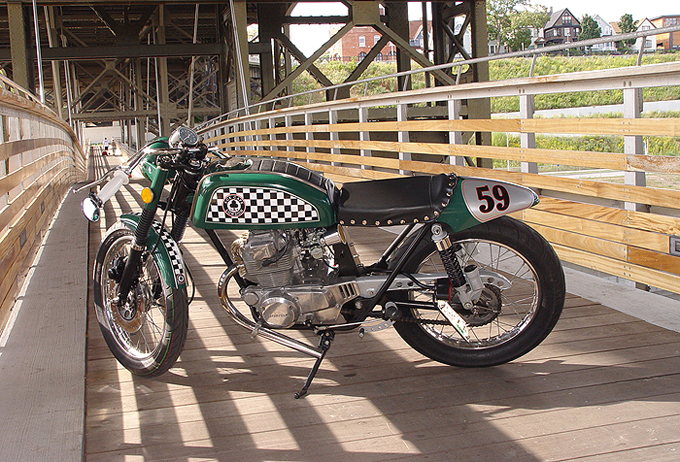 To pay tribute to the Ace Cafe – the birthplace of the café racer, Richard Weslow and his good friend Kurt Schwengle built this beautiful little 1976 CB200 to show at the Rocker Box Motofest in Milwaukee Wisconsin. The guys at Moto-Scoot in Milwaukee helped him with parts and tires, and the folks at T/A Graphics did the checkered tank and the historic ’59’ fender paintwork. Apparently if you look close at the graphics there’s even a picture of Richard’s late grandad who introduced him to motorbikes as a kid. Richard is now in the process of building a 1973 68hp mono shock RD350 for the Rocker Box 2010 which we will do a follow up article when complete. To view more outstanding pics of this vintage café racer visit Richard’s Flickr page.