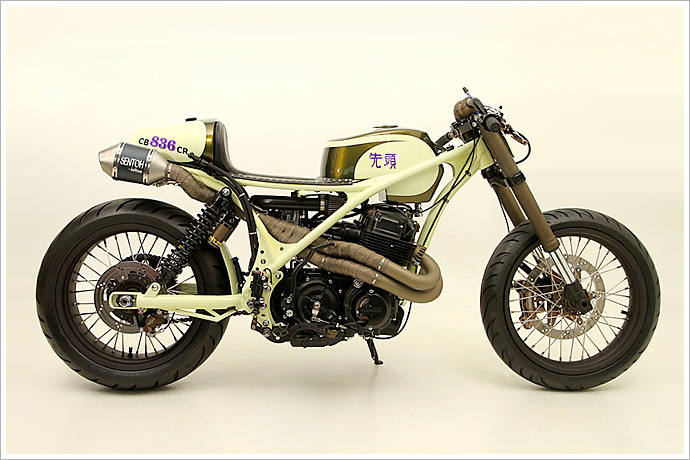 There’s always an inherent problem being in a “scene” like the current boom for cafe racers, and that is that you are so bombarded with cool bikes that your eyes become a little shuttered to the possibilities you have when you set out to make a bike for yourself. In many ways the eyes of someone outside the “scene” are more fresh and therefore able to really create something new, like this all-original take on a cafe racer by Jim Guiffra and the guys girls at his AFT Customs shop in Jackson, CA. More used to a Californian chopper style of customising, it’s really refreshing to see a racer with a new approach. Based on a 1976 CB750 Four, It’s definitely channelling the spirit of cafe racers but with a healthy shot of west coast ‘tood, a pinch of track gear and (seemingly) a few left-over parts from a giant Japanese robot. It’s one of those rare bikes that makes you do a double-take with it’s deft, effortless mix of genres yet coherent overall look.