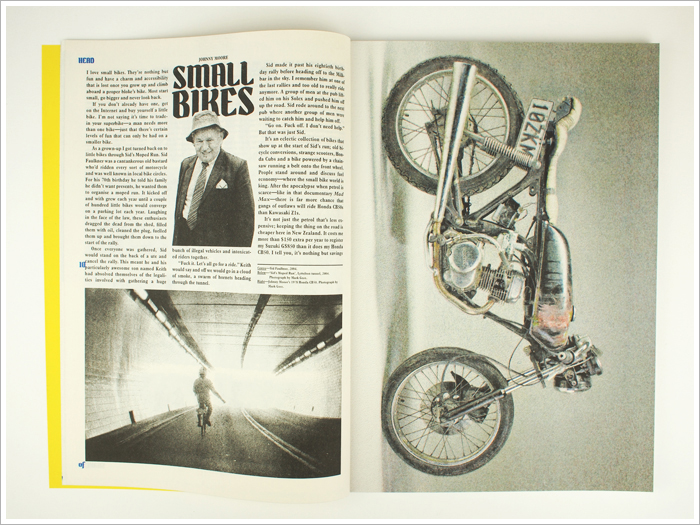 Next time you walk into your local newsagent just have a look at how many crappy magazines there are crammed on all those busy little shelves. And let’s be honest, most of them were more useful as trees – and probably better looking as well. So when we were sent a copy of a new magazine called ‘Head Full of Snakes’ we were initially sceptical, to say the least. Until about 10 seconds after we opened up the envelope and pulled out a magazine that didn’t feel like the usual glossy motorcycle mag we’ve come to expect. This felt more like something that was made in the 60’s or 70’s. It felt handmade. It felt like an old friend; the way a motorcycle magazine should be. Not completely filled with advertising. Not overly polished or slick, but instead a solid collection of great photographs and honest stories. You can almost smell the passion and sweat that went into it. The magazine is the brainchild of motorcycle nuts and graphic designers Luke Wood and Stuart Geddes. Here’s how Stuart describes his magazine…

Here at Pipeburn Heavy Industries, we love ourselves some creative and original motorcycle content, which is why we wanted to show our support for a new motorcycle publication called Big Bore Magazine. The magazine is designed and written by Frenchman Franck ‘Castrol’ Samery — don’t worry the mag is written in both English and French. Franck is a graphic designer who has been restoring vintage bikes and cars for most of his life. He also has a Triton to die for.