Pipeburn Poll: Firestone Deluxe Champions – are we over them yet? 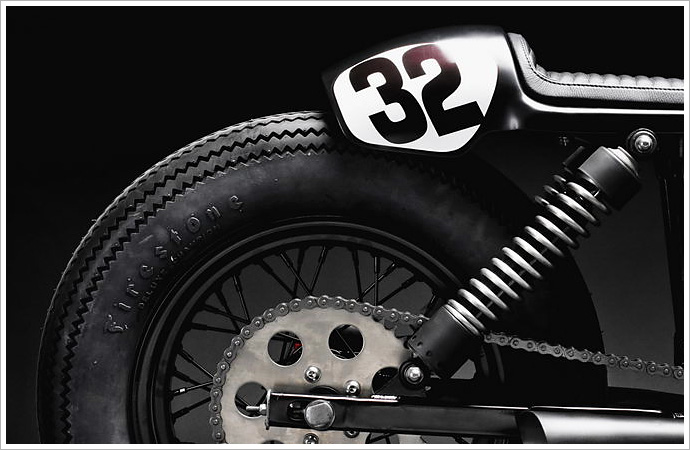 As much as we all hate to admit it, custom bikes are as much about fashion as they are “timeless design” and “classic style.” Even something as seemingly set in stone and sorted as cafe racers have their own little trends and fads that mat just prove to be long-lasting and classic as the latest Justin Bieber record in a few year’s time. Now I admit I may be swaying the vote a little using a cool-as-fark picture like the one above to open the piece, but I think it’s a great visual representation of the issues at hand. You gotta admit that they do look great, but does a tire designed in the 1950s really belong on bikes being built in 2012? You wouldn’t put oil made to 1950s standards in your engine, or wear a helmet from the Eisenhower era, would you? Or maybe you would… 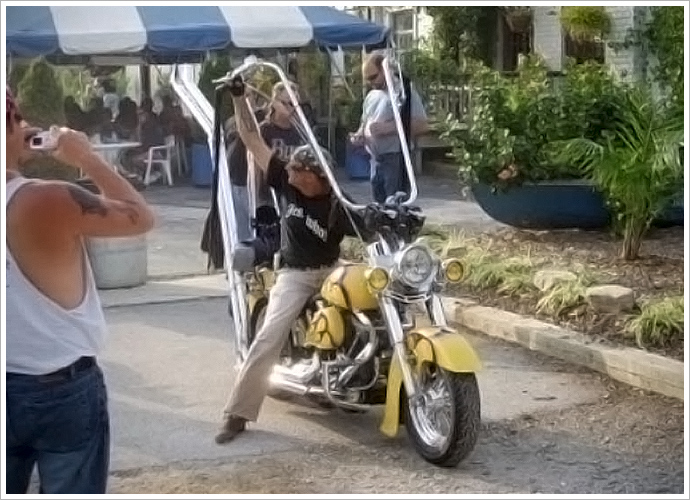 Browsing the web the other day, I stumbled upon a repost of the beautiful Old Empire Pup we revealed to the world on these very pages. But unlike you pack of freaks, the guys reading this article were obviously not died-in-the-wool custom bike freaks, but more of your regular ridin’ Joes. Reading through the comments, I found one that went something along the lines of, “Aesthetically pleasing but I wouldn’t want to travel any distance on it. To me, any bike has to be ridden first, looked at second.” Now this really got me thinking. What kind of mad man would value how a bike rides over and above how it looks. Especially after seeing the the bike in question? The answer is, of course, heaps of people. I mean, how many BMW R1200GS do you see on the roads? And if there’s any bike that perfectly represents form following function, that old German mule would have to be it. But are they onto something? Are we all fashion victims just like that ape hanger maniac above? Are we all insane to judge a bike on looks alone and ignore how it actually rides?

Pipeburn Poll: Is Getting Your Knee Down Really All That? 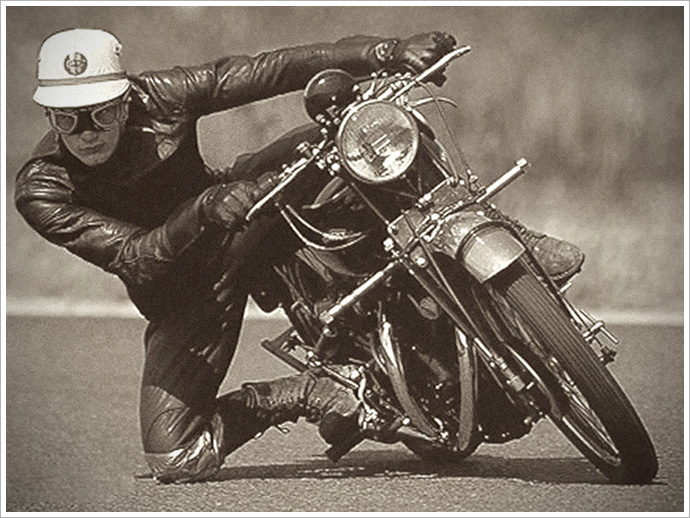 Just look at that shot. John Surtees, one of the world’s greatest GP racers, getting his knee down while riding his father’s Vincent Black Lightning in the early 50s. Except it’s not. See, as realistic and authentic as this shot looks, it’s a fake because Surtees never intentionally put a knee down in anger. Ever. How do I know that? Because the first ever recorded racing “knee down” didn’t occur until the early seventies and one Mister Jarno Saarinen. So Mr Surtees managed to go his whole amazing career without ever putting patella to pavement. Which beggars the question, just how necessary is getting you knee down?

Poll – Cafe Racers And Track Days. Yes or No? 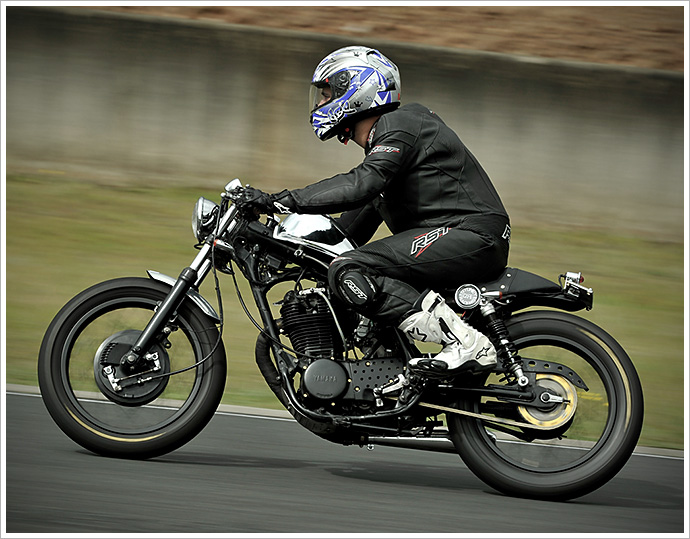 The image above shows the everbold Mark Hawwa, supreme ruler of our good mates at Sydney Cafe Racers, doing something that kinda blew my mind. Extraordinarily, he took his beautificient SR to Sydney’s Eastern Creek Raceway for a track day. A cafe racer. On a race track. Crazy. But it got my mind wheels a turnin’. Do cafes really belong on a track? Aren’t they specifically a public road beastie? Sure, they were inspired by racing bikes but they were never intended to actually race on a track, were they? Or is it more a long-lost son returning to his true home? Oh, how my motorcycling mind spins! So what do you guys think? Do cafes belong on-track? 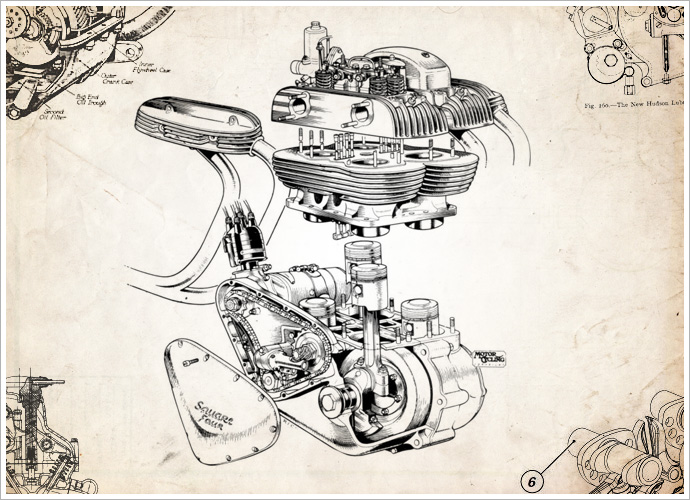 Ariel’s weird-ass Square Four configuration. It seemed like a good idea at the time

There’s a saying that goes something along the lines of “art is a science with more than seven variables.” Now correct us if we’re wrong, but we think what it’s getting at is that after the seventh level of variation in a particular system, things get so complex that it’s impossible to study rationally and you just have to sit back and enjoy the arcane beauty of it all. Much like choosing a particular motorcycle engine. One of the most amazing things about motorbikes is that there’s a genuinely impressive amount of engineering experimentation going on. And each time a manufacturer decides to shake things up a little with a strange new array of flailing pistons, we all benefit with a whole new riding experience to enjoy. Different power delivery, noise, vibrations, torque curves, idle – the list is almost endless, as are the smiles. But we’re not here to be vague, we’re here to be specific. Damn specific. What’s your favourite engine configuration?

(Update: Only 30 more votes to make this our most popular poll ever. Many thanks to everyone who has taken the time! Feel free to mail us with your own poll ideas if you think you’ve got a good one.)

We’ve all seen and heard it a million times before. On tees, patches, stickers, badges, tattooed on your private parts after a particularly wild New Years party. Or is that just me? Anyway, have you ever stopped to think whether there’s any merit to the thought? Are loud piped-bikes really less likely to see their masters and commanders pay a visit to the big custom house in the sky? If that was a fact, why aren’t all bikes built to deafen?

The days of most cagers driving with their windows down while listening to a tinny AM radio with a $5 speaker that couldn’t rock a matchbox are well and truly gone. Look around you at the lights these days and you see windows up, 36 speaker sound systems pumping out The Pussycat Dolls latest pile of hot dung, sat navs a’satting and a’naving, and a disturbingly large percentage of drivers fiddling with their iPhones. How’s a few loud noises going to save you from these hung-over soccer mums with a car full of screaming kids, an incoming call, and a steaming lap full of Seattle’s finest? Could loud pipes really save your life? Time to decide, peoples.

Pipeburn Poll: Full-Face, Open Face, Or None At All? 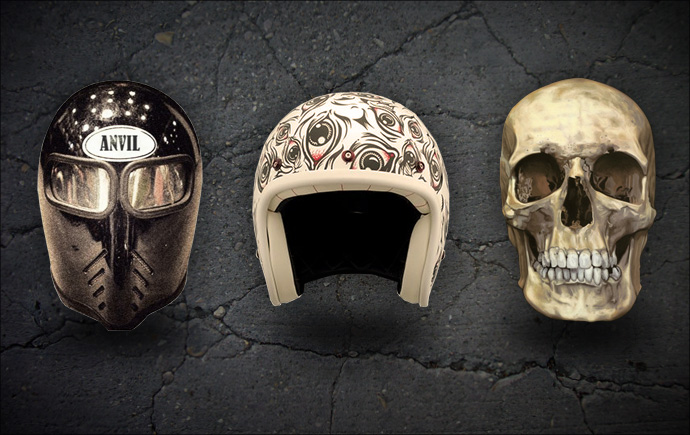 I’ve always held a fascination for America’s ability to put personal freedoms above all else. There’s few other examples of the culture that take you so quickly to the heart of the country and which speak more strongly about what it means to be an American. And in my eyes at least, nothing speaks more strongly about America’s dedication to personal freedoms than their helmet laws. Now please don’t get me wrong, I’m no spokesperson for the Helmet Law Defense League. I have never ridden a bike without a helmet and I never intend to. I value my brain too much for that. It’s what I use to love my family, earn a living, and enjoy a country ride in autumn as the sun sets. But I’ve always been one for standing up for a person’s right to choose.

Of course, it’s not as easy as all that. It’s impossible to deny that helmets reduce fatalities and brain injuries amongst the biking community, and that in turn reduces insurance premiums and medical costs for us all. And losing your ability to wipe your own arse and support your family because some drunk pensioner crushed your head like an egg is a pretty poor trade-off for the feeling of the wind in your hair. Yet American still has four states that are totally fine with their population of millions riding without helmets.

So what’s your choice? When you open the garage door in the morning and walk towards your miraculous iron horse are you carrying a closed helmet, an open one, or just a fist full of nothing? 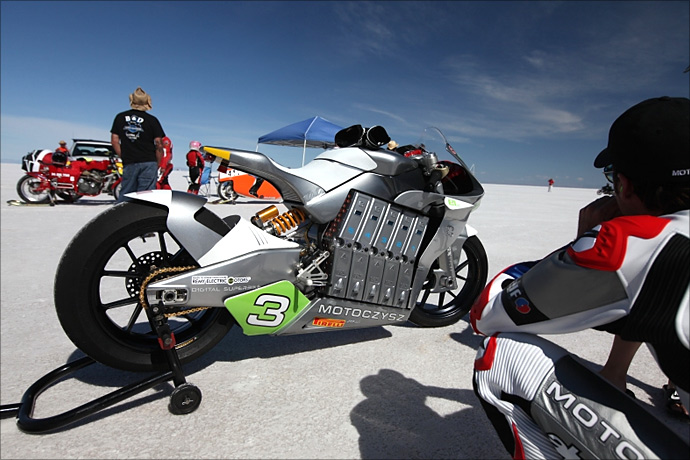 God, I love internal combustion. Like, I REALLY love it. I love the smell of it. The hot engines that creak and tick as you kill the ignition and walk away from them. I love the flames and primeval brutality of exploding something that you get out of the ground. I love the fact that they drip oil and blow smoke and burn your fingers and wake up the neighbors at 7 am on a Sunday morning. I still remember with ridiculous clarity the moment I fired up my first engine sans exhaust header. The thing shot 12 inch blue flames out of the side of the engine as if Satan himself was battling to escape from inside the block. And the sound; like a squadron of Supermarine Spitfires had landed in my garage and were singing an incendiary opera at 180 dB just for my own childish amusement.

For me motorbikes and internal combustion go together like stink and poop, steak and red wine, or Charlie Sheen and bat shit. They are indivisible. I think about a world without exploding liquid dinosaurs and I’m genuinely sad. But with that said, I’m imaginative enough to see that an electric bike could also kick serious butt, albeit in an entirely different way. Instant power with maximum torque right across the rev range would be pretty incredible. And as cool and a loud pipe is, I can picture a long ride through a forrest with little more than a cool power station whine and the sound of the wind to keep me company as something that could be rather freakin’ sublime.

So what do you think? Could you ever replace hydrocarbons with electrons? That is to say, electric bikes – yes or no?

Pipeburn Poll: How do you brake? 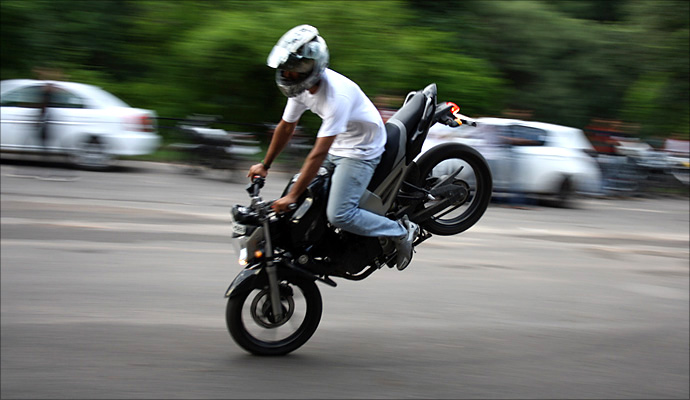 Ever notice how arcane motorbicycling is? With cars it was oh-so-simple; “steer into a skid” my father told me. It seemed a bit weird on first hearing it, but on the next quite dirt road when no-one was looking I gave my 1976 Toyota Celica a hefty squirt of petroleum and, hey presto, he was right. Tail goes right, I steer right. Easy peasy, and often repeated by pretty much everyone. Off the top of my head that about covers it for four-wheeled black magic.

But not so with bikes. My first-ever bike ride as a teen was prefaced with the explicit instructions “don’t use the rear brakes – you don’t need ’em” by my unwitting sensei. Right. So they’re just there for looks, then? Whatever the logic, I took the lesson on board and never touched the things. Then years ago in my first Motorcycle Rider Training Class my cranky old bikie teacher told me to always use BOTH front and rear brakes for EVERY stop. “If you don’t,” he lectured, “you’ll never be able to do a proper emergency stop.” Sheesh. Okaaaay then.

And so it goes on. Everyone’s a braking expert – do this when braking, but don’t do that. Use the rear, but not on a day with a date that is a prime number or on an equinox and even then only when riding a puce-coloured bike blah blah blah…

So let’s get this poop sorted, once and for all. What have you guys been taught and does it work? Basically, how do you brake?

Pipeburn Poll: Do you filter?

I had an interesting experience riding my bike the other day. And by interesting, I mean stressful, annoying and generally pissing from a great height on my impression of the human race. I was approaching a red light at an intersection. There were a few cars already stopped at the lights so, as I sometimes do, I rode around them to the head of the pack. Most countries call this move “filtering” or “lane splitting” – simply put it’s the process of riding a motorbike through stationary or slowly-moving traffic by riding in the spaces between the cars.