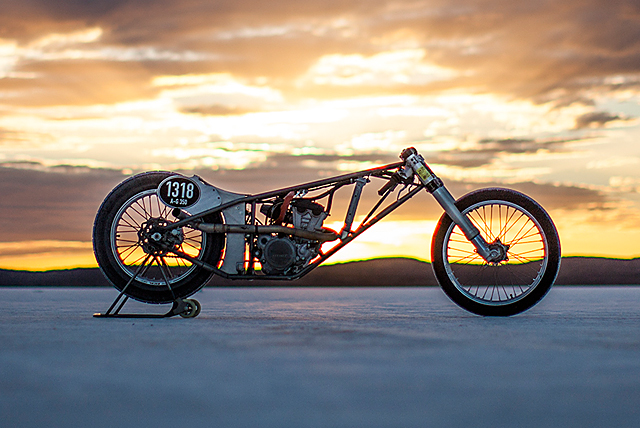 For a man known as ‘Engineered to Slide’, Nigel Petrie certainly gets how to go seriously fast in a straight line. He also knows a good idea when he sees one. Since 2010, he has used his web presence under the E.T.S. banner to share his ideas, showcase his endless automotive creations and be a place where like-minded creative spirits can push each other to new heights. His latest venture is this Salt Flat Racer based on a 2012 KTM 350 SX-F, but his ground breaking Hilux Drift Ute is perhaps the vehicle that truly put Nigel on the map and spawned a documentary about its build and exploits known as Dream.Build.Drive. So it made perfect sense that as he began this new adventure to concur a land speed record that the cameras would once again be rolling. The results, a movie called Flats, will soon be released. But first, the bike… Most ‘barn finds’ (or shed finds, as we like to call them Down Under) are a story enough in themselves. What more could you add to a tale where a bike nut finds their dream wheels like a pirate finds hidden treasure? Well, the Pudney brothers weren’t satisfied with finding a killer unit Triumph lump in next door’s garage. They also added an old lady, the loss of a loved one and decided things would be more interesting if their dream engine was in pieces as well. Here’s Ric and Johns Pudney’s Triumph Bobber.