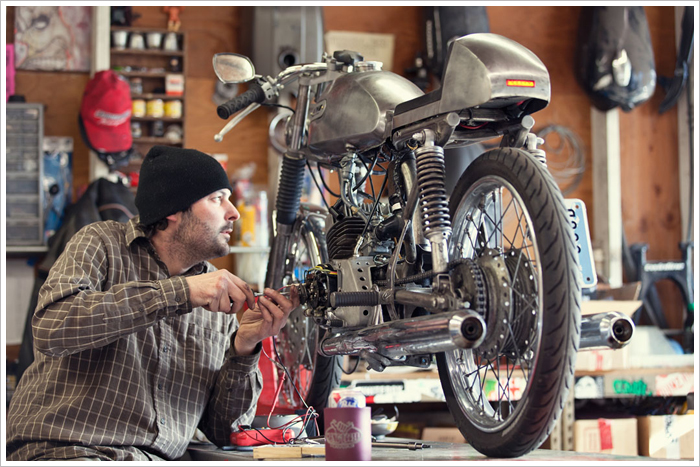 Twinline Motorcycles is a custom shop in Seattle Washington who have been building and restoring loads of beautiful cafe racers and vintage bikes. Last year Jeff (Tower) Pochodowicz took over the running of the shop and he hasn’t looked back. He managed to put the wrench down and answer a few questions for us.

Can you tell us a little about yourself and Twinline?

My name is Jeff (aka. Tower). I took over the management and operations at Twinline Motorcycles in September 2011. I grew up spending most my days riding a bmx bike and at one point my dad bought a Suzuki 125 quad, I loved that machine. I rode the hell out of that bike, breaking tons of parts along the way. Eventually he sold it and my sights turned to skateboarding. On May 25th 2007, my 30th birthday, I bought a Gpz550 off my friend and really that’s were my motorcycle career started, bang. I had no idea that buying that bike would change the course of my life and direct me to where I am today. I moved to Seattle in 2008 and was introduced to Ian and the guys at the shop. My buddy said “maybe these guys will help you get that piece of shit running right.” For a half rack of PBR and 80 bucks i was rolling. I thought the place was cool so I hung around soaking up as much knowledge as I could. In January 2009 i was interning at the shop full time. We changed locations to a larger, better workspace and I worked hard on honing my skills in problem solving, motor builds, fabrication and customization. During the summer of 2011 Ian had the itch to move to California with his family so i decided that taking over the shop was the best way for me to continue doing what I love to do while keeping the shop as a creative hub for the motorcycle community.