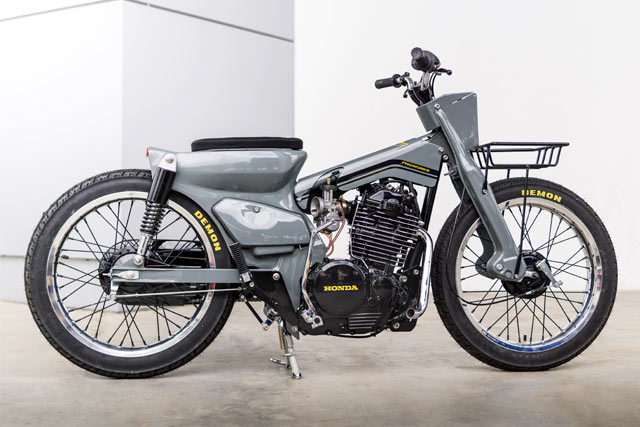 Most engine swaps on motorcycles are sensible. People will stick a SR400 engine into a British plunger frame. They’ll lower a shovelhead engine into a hardtail. It usually makes sense. But rarely will a builder do something as bonkers as Malaysia’s FNG Works. They’ve crammed a 600cc Honda thumper engine into a diminutive Honda C70 and somehow done it cleanly enough that it looks perfectly stock. Irwann Cheng, head of FNG Works, has spent years honing his craft under other people. Initially employed at renowned Malaysian workshop Beautiful Machines he left the shop to work as an engineer. In his spare time he trundled along, making custom motorcycles, furniture and sundries in his spare time. Then he quit and went all out on FNG Works Speedshop, a retail store that sells riding apparel and builds custom motorcycles. With such a pedigree Irwann and FNG has built quite a reputation in Malaysia. Hell, two years ago their premiere national motorcycle show, The Art of Speed, commissioned Irwann to build a motorcycle for a giveaway. So FNG made a bombastic, stretched, twin-engined RX-Z Yamaha. The organisers loved it and wanted another custom ride for their 2018 show. But this time around Irwann wanted to build something a little more subtle. Well, sort of subtle. [superquote]“I wanted to further the ‘sleeper’ factor by retaining the stock frame… and shoving a bigger engine in it.”[/superquote]

The build started with a stock little C70 Honda spotted by Irwann during an evening stroll. He approached the owner, who had owned the little runabout from new, to see if he wanted to sell. He did, and FNG Works had their starting point. Irwann had big plans for the new build. “I’d seen Maru Motorcycles in Japan put a 250cc engine on a C70,” he recalls. “I wanted to further the ‘sleeper’ factor by retaining the stock frame… and shoving a bigger engine in it”. So then they went to work. As with every build FNG always start by picking the wheels first. And despite some of the ridiculously wide-rimmed Honda Cubs kicking around Malaysia he wanted something that looked relatively stock. New, wider tyres and rims were propped against the rolling frame and an engine from a Honda XR600R placed in front. Then Irwann stood back. “From there I could see the proportion of the bike and decide on the position of the engine, stance, absorber length and swingarm length,” Irwann says. “I didn’t want to change the geometry too much and wanted it to look stock”. But to do that the frame would need a hell of a lot of internal reinforcement to deal with the thumping big single. “I had to build a new top tube that sits higher than the original that goes through the pressed sheet metal skin,” Irwann explains. “I then fabricated an oil tank which also acts as a stressed member, which sits in the tight space between the front tyre and the engine”. With all that work plenty of original components had to be altered, with the standard fuel tank chopped in half to make way for the new top frame tube and plenty of reinforcing. To accommodate the new rim sizes the front forks were widened and a 2.5×18 rim fitted. Above that, a Honda Benly-inspired headlight was fabricated and fitted. At the rear, the swingarm and chain guard was lengthened to match. A subtle tail light was hidden neatly away below the slimline seat. To keep the bike looking svelte FNG even cut down the side battery cover to accentuate the lines of the bike. The hardest part of the build? Well, according to Irwann the answer is simple. “Fitting the 600 engine to the frame without modifying the frame geometry. The proportion, fork rake and position had to be in the same (or similar) position as a stock bike. I didn’t want it to look weird if sitting next to a stock C70. The space was tight and a lot of reinforcements had to be made and hidden from view”.

But what a job he’s done! Cramming an engine into an existing frame is one thing, but making it look as coherent and ‘correct’ as this is incredibly difficult to do. And Irwann is understandably delighted with the result. “I like that the seat and swingarm are horizontal and so much of the bike has lines that are parallel to each other. The front basket makes it look soft. But when it starts and the sound roars through the stainless exhaust it spits fire. It’s like having two different personalities”.