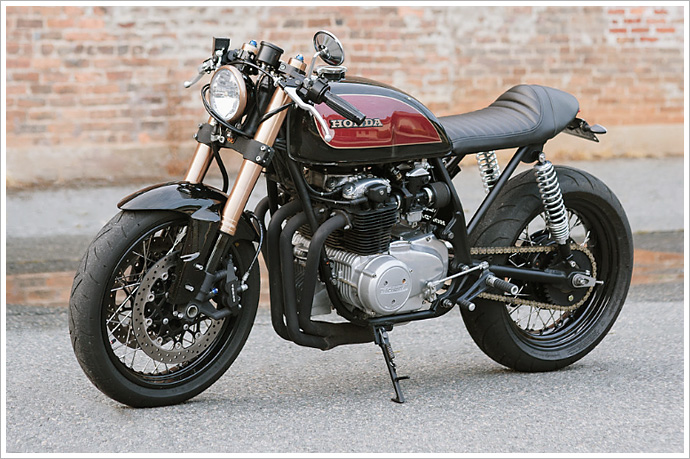 Too often it’s the more wild creations of the custom bike scene that get all the attention. Like cheeky kids, they play the crowd and manage to get all eyes on them. Which is all good and well, unless you aren’t looking to be king of the hill and would rather travel with a certain understated style and grace. For those times, you’ll be wanting a bike that is cleaner than clean with nothing at all more than the absolute minimum required. Everything it its right place. That bike is this bike. This bike is Devin Henriques‘ Honda CB550 café racer. “I purchased this CB550 from a man in West Virginia, who replied to my Craigslist posting stating that I wanted to buy a CB750 frame. He said he had the title, but the bike didn’t run and sat for a number of years. We settled on $260. Months later, he was still looking for the title. It took me 9 months to find the legally registered owner and proceed with the abandon title process.” “The frame from the motor back was cut off and redone with all of the tubing. This created that straight, tank-to-seat look. I then used 14” shocks in the rear. I purchased the seat from Dime City and removed about 2” from the front, then had it reupholstered. The tank is from a CB500T and painted with new colors, but with the original profiles. Rearsets are Tarrozzi, mounted to a bolt-on bracket I designed. The front fork is from an ’07 GSX-R. I then designed a front hub for laced wheels, to be a bolt-on solution for people wanting to run a laced wheel on a GSX-R fork. Also, I designed a simple top tree to match. Both are now offered on the Congitomoto.com website.” “The entire electrical system was trashed and had to be rewired from scratch. The motor received a complete overhaul and was powder coated along with the frame, hubs, and rims. The exhaust is from Carpy and the shorty muffler from Dime City. The rims are 17” Harley ones so I could run modern tires. There is a ton of stuff I haven’t covered ib detail, but it is all captured on my build forum for anyone interested.” “This CB550 is a joy to ride. It’s light, nimble and has just enough power to pull you through the turns, but keeps you out of trouble. It truly feels like a mini sport bike. Since I lack any ability to take a decent picture a photographer friend of mine, Sera Petras helped me out with these great pictures. I hope you guys enjoy these pictures as much as I do.”