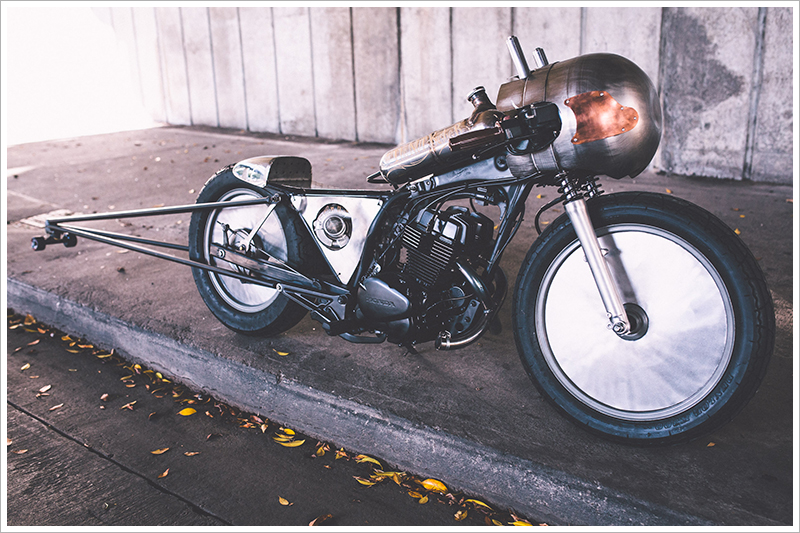 A few weeks ago I received a phone call out of the blue from Mark Hawwa. For those of you that don’t know Mark, he is the guy behind Australian Cafe Racers, Throttle Roll and the Distinguished Gentlemans Ride, amongst other things. Mark begins to tell me he has a great build idea for the upcoming Deus Bike Build Off. I presumed he was talking about next years build off because this conversation took place 48 hours before the Deus Bike Build Off was kicking off. “It’s called the Nut Buster” he tells me proudly. “and we’re going to build this bike over a 24 hour period with a few mates”. At first I thought he was crazy, but then I thought if anyone could pull it off, it was Mark. Firstly, he has a lot of friends who are very handy with a wrench, and secondly, he is one determined son of a bitch. One of the main rules for the Bike Build Off is to ‘make the most with the least’. Not only does this bike tick that box, but it was also built in the least amount of time. Meet the ‘The Nut Buster’, the 24 hour build that nearly broke six grown men. It all started when Mark bought a very average 2001 Honda CB250 donor bike for $300 and then went about finding anything he could that might be useful in transforming the bike. Although the actual bike build would only take 24 hours, he did spend a little bit of time scouring through council clean up, filling his van with all sorts of rubbish that could become a part of ‘The Nut Buster’. These parts included a CD rack made out of metal with some fantastic weird curves, an old shovel, a beer tray, a kids foam floaty, some bread baskets, metal dishes and an old record player. He also went through his shed and found an old bread mixing bowl, a Honda Z50 Monkey fuel tank, some spare metal and some other bits and pieces. He also went through his local mechanics metal bin and found a blown turbo. “One of our friends had recently taken out his hot water system so we grabbed some copper off him” he says. “We didn’t know if we would use any of the pieces but where limited to using only free parts that’s where recycled. ‘The Nut Buster’ is about using parts that don’t belong on that section of the bike. The concept of our 24 hour build was to be spontaneous as well as creative and work together to make something completely in practical and  introduce some new ideas to the DIY community.” The build consisted of six people. One specifically for social media as they wanted to show people that this 24 hour build was legitimate. Apart from Mark, the team consisted of Ren De Haas, Chris Gray, Darren Millichamp, Chris Atkinson and Stephen Broholm. “The team had varying levels of experience and a lot of the tools that I used I hadn’t used since Metal Tech in high school back in 2001” said Mark. The workshop was donated to them by Ren from Rene9ade Custom Motorcycles – so all that was left to do now, was get to work. Ultimately as the hours started to fly by decisions had to be made. “A quick drawing of the lines we were going to follow was drawn up first thing in the morning and that was our blue print for the build” says Mark. “The front fairing was built out of an old dough mixing bowl. The fuel tanks were built out of twin Kawasaki W650 exhausts. The seat was built out of a beer drip tray. The rear cowl was built out of the Honda Z50 Monkey fuel tank. The Rear suspension springs where cut and added to the front for extra stiffness. The rear suspension was now offered by two spanners. The wheels where covered in sheet metal and the side covers where custom made using metal.” “The air filter was replaced with a gutted turbo as the air intake. The copper was used to decorate the front cowl and side panel. The exhaust was modified using the standard system, cut and welded to a custom ‘X’ Design. If you look closely, the exhausts also have custom truck style flaps. The wheelie bar was built to use the top of the suspension mount and the rear foot peg mount. It uses an old skate board truck with some spare wheels one of the boys had from making a chain tensioner. We slammed the front end within an inch of its life, so it’s basically a hard tail back, hard pecker front. Removed the head light, indicators and tail light. Shortened the side stand and removed the chain guard.” “Building the bike wasn’t without its own issues. We ran out of Argon welding gas at 1am in the morning so had to result to using wire and cable ties to mount the side covers as well as relocate the battery under the swing arm. Not the best of options but the best we could do with what we had. In testing the bike and making sure it ran, we couldn’t get it up the ramp to the workshop as the shortening of the headers and the extension of the air filter set up meant it needed a tune and none of us had time for that. A steep push up hill it was. The front fairing had to be adjusted multiple times to take into account handle bar position, mounting etc. Then it had to be adjusted one last time to fit the front brake reservoir. All up the front cowl itself took about 7 hours. All in all though the hardest challenge was just making shit work on the bike. The fuel tank took an insane amount of hours and resulted in some life scars. Physically and mentally.” The bike rollled into the workshop as a very sad looking 2001 Honda CB250 and rolled out the following morning as a Apocolyptic-Steampunk-Drag-Café Racer. The build may have taken its toll on the guys, but at least the budget break down was easy to calculate. Donor bike was purchased for $300. They spent $50 on additional bolts, rubber for the air intake, some glue for the wheels and $70 on pizza.

The bike has made it into the top 20 of the Deus Bike Build off and they need some help getting votes. If you like the bike, like the fact it made the most with the least, like the fact they built something in 22.5 hours (to be exact), then head over to the Deus voting page and ‘like’ the Nutbuster.

Photographs by My Media Sydney