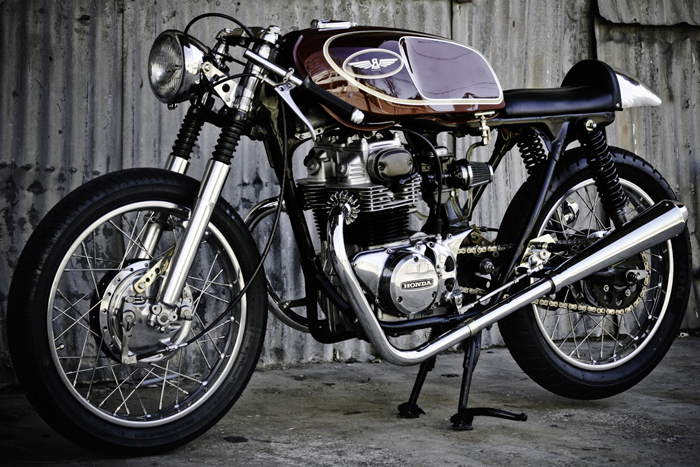 Michael LaFountain from Raccia Motorcycles has been obsessed with motorcycles ever since he built his first bike when he was 17 years old. Little did he know that building that motorcycle would shape the course of his life for the next 16 years. “I’ve been buying and recreating bikes ever since” says Michael. “I’ve built British and Italian motorbikes in the past but I have found the Japanese bikes to be more of a challenge due to the fact that the a large majority of the British and Italian bikes were beautiful to begin with, unlike a lot of Japanese bikes.”

After spending a few years in Europe and spending way too much time plastering his apartment walls with sketches of new ideas, Michael knew that when he returned home he had to take this bike building thing more seriously. “I formed Raccia Motorcycles in 2006 with the main objective to create vintage Japanese race-inspired motorcycles using primarily Japanese parts along with some hand built parts” he says. The main shop is in Southern California but 4 months ago Michael opened another satellite shop in the Bay Area of northern California.

“In my opinion the Japanese engineering surpassed it’s European predecessors in the 60s and 70s but was still far inferior in the aesthetics department. I’ve always believed that the Japanese motorcycle could rival the beauty of let’s say a Norton or Ducati, but it just takes a little more work.” This is exactly what Michael has achieved with this stunning 1971 Honda cb350. “I’ve always loved the styling of the 60s British and Italian production racers so a lot of that inspiration went into this build.” Here are a few of the alterations he made: Battery relocation, handmade seat, alternate tank and clip-ons to start. Michael handmade the rear-sets and spent a good amount of time reshaping the cases to give it the ‘Raccia touch’. With a large amount of weight removed, larger pistons and a steeper cam this beautiful little two cylinder really moves. “As an art major in college one of the most valuable things I learned was the importance of proportion and lines” he says. “I’ve always tried to build bikes from an artistic perspective and utilize those ideas obtained in college. I focused a lot on the lines of this bike and I’m pretty satisfied with the result.”

This CB350 cafe racer was purchased by The Mike Taggart Guy Webster Motorcycle Museum in Ojai California last year and will probably spend the rest of its days being drooled over by numerous automotive fans. Michael LaFountain is currently working on six new projects with the first to be completed in early May. As far as we’re concerned, May can’t come quick enough.