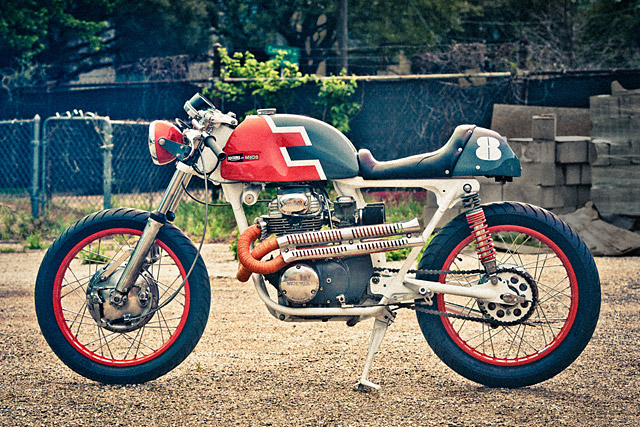 OK, maybe we’re slow or something, but apparently African Honey Badgers don’t give a shit. Now we hadn’t heard this before. That’s not to say that they spend their days watching cable TV and smoking weed. Hell no. Besides, their lack of opposable thumbs would make using a cigarette lighter almost impossible. See, these Honey Badgers are apparently renown for being totally and utterly fearless when it comes to fights. Whether it be snakes, birds of prey or even a lion – they’ll take it on without batting an eyelid. Now just imagine the Honey Badger is actually a bike builder named ‘Isiah’ and his fight was getting this bike ready for the 8th Annual Rockers versus Mods show in Dallas… Here’s Mark Roberts, organiser of the Dallas Rockers vs. Mods show. “Much like the honey badger, Isiah Booth of The Moto Conspiracy doesn’t give a shit. Like his bikes or not, his vision comes from an eclectic background restoring vintage Volkswagens and hammering together small-frame Vespas – and it is a remarkably concise vision. His bourbon-soaked, jovial manner and fart jokes belie the eye of an artist and the hand of a natural-born mechanic.

[superquote]“His bourbon-soaked, jovial manner and fart jokes belie the eye of an artist”[/superquote]

From a haphazard shop that looks more like a barn find than a business he pulled together bits and bobs from numerous bikes to birth this, including forks from a CB500 and a front drum from an early CB77. The fact this bike was purpose-built to raffle off during the Dallas Rockers vs. Mods rally made for a build-on-a-budget. The money was so tight Isiah stitched the seat cover himself to save a dime.” “The engine was built from three hulks bought on the cheap; the tank came from a Rickman dirt bike that was languishing in the corner; Craigslist CL pipes were also utilized and everything else was fabricated, ground down to fit or created from scratch. The seat, for example, was first shaped out of foam and then laid over with fibreglass, allowing the front to match the tank perfectly, as well as frenching in the tail light. The forks and hubs Isiah personally cleaned, polished and relaced with stainless steel spokes.” “The entire wiring harness was built from scratch to keep within budget. All of these decisions to expend extra labor to save money were made so he could focus the minuscule budget on powder coat and paint. Extreme Powder Coating hooked up the frame and wheels, Superior Body Works did the paint to Isiah’s exacting specifications, and vintage waterslides were created with the Rockers vs Mods logo in place of the Rickman moniker.” “And Isiah’s vision resonated with the masses; Dallas’ Rockers vs. Mods sold so many raffle tickets they ran out. Yet Wally Manaugh was lucky enough to have his name scrawled on a blank scrap of paper and walked away with the bike. Well … he didn’t quite walk away with it – he was kind enough to allow TMC to take the bike to the City of Hippies (Austin) to have it featured in the invite-only Handbuilt Motorcycle Show put on by Revival Cycles and sponsored by COTA and Moto Guzzi during the second race of the MotoGP season.” Isiah also took the time to give credit where credit’s due. “I’s just like to say ‘thanks’ to all those who helped out with the RvM 8 Raffle bike. Namely Dat Mai, Michael Alton, Ashton Whitley, Mark Roberts, Matt Booth, Dana Morgan Booth, Justin Bowers, Derek at Xtreme Powdercaoting and Cruz at Superior Body Works. Your help was greatly appreciated.”