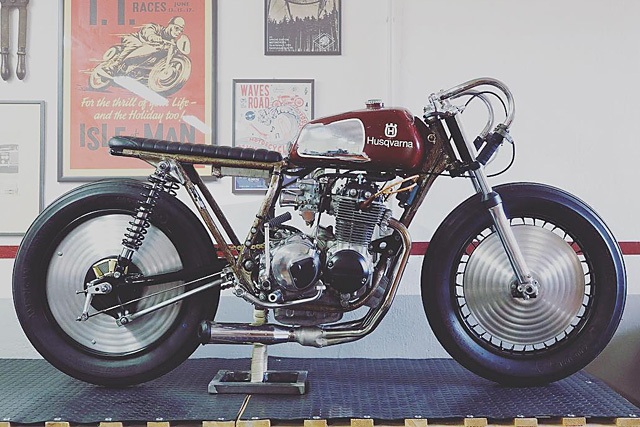 A good custom bike build is a big ask from just about anybody. The time, effort, thought and skills required are a challenge that has bettered the best of us. Starting custom shop is another step above that. Suddenly there are things like rent and customers to think about, let alone building cool bikes. Adding restorations into the mix means you’ll have to have an understanding of just how the bikes came out of the factory. Add cars to the mix and you’ve now got vast expanses of metal bodywork to consider. Seems like your climbing Everest already, yes? Well what if, just for good measure, we now make the shop both a clothing store and a brewery? Mission completely freakin’ impossible? Not for the keen proprietors of Italy’s Apache Custom Motorcycles. And as if to boast, here’s their out-of-the-box take on a Honda CB350F brat. Apache Custom Motorcycles is a relatively new brand created for the purpose of creating Italy’s best custom motorcycles. Born in January 2015, in fair Verona, near Italy’s biggest and clearly most beautiful lake, Lake Garda. The workshop is open 7 days a week to all and sundry, specialising in pretty much everything to do with that big, wonderful world of customisation. This apparently includes café racers, scramblers, bobbers and choppers of both Japanese and English extraction. Add restoration to the mix, and the fact that they carry almost everything in-house for the preparation and reinvigorating of engines, the creation of frames, new and old tanks, fenders and more, and you’ve got a retail space that sounds like any real biker’s idea of seventh heaven. But wait, there’s more. Heaps more. “Within the complex there is also a machine shop for repairs, a motorcycle restorations department, a recently commissioned vintage Porsche department (of which 90% are Porsche 356s), a body shop where we paint the motorcycles and cars, and to finish it off the new showroom is almost complete,” Says Apache’s Danes, short of breath. And just when you think they could possibly have time to do anything more… “We are developing our own line of clothing and accessories, and we currently produce and distribute our beer own beer, an American Pale Ale also named ‘Apache’.

[superquote]“Then we saw the dusty frame of an old Honda 350 four smiling at us from the darkness.”[/superquote]

But let’s not stray too far from the task at hand. “It was barely a month before the big Motorbike Expo and still we had not thought of a decent idea for a bike to promote the shop – main because we had a lot of work commissioned by customers. Getting worried, we looked around for some spare parts inspiration, and in the workshop we had several pieces and accessories that we thought we could use. Then we saw the dusty frame of an old Honda 350 four smiling at us from the darkness.” And hey presto, they had their basis of their bike for MBE 2016. “We wanted to do something different, something that would really strike people. And not necessarily because they liked it – but more because it was different to what they’d seen before.” It was also decided that the build would use a s much recycled materials as possible. So they begin to assemble all the old parts they though could be useful. A wonderful old Husqvarna tank came from a friend of a friend. Some bike handlebars with two old levers, and various other bits and bobs.

“In my house in the countryside, I saw two old tires off a tractor and decided that the bike’s tires had to have that a similar look. In the meantime, we decide to lighten the bike as much as possible; we removed all that wasn’t essential and totally simplified the electrical system.” At the same time they sanded they frame back to patchy bare metal and gave it a few days to oxidise before giving it four coats of clear gloss to sell in the natural goodness.

“We also had another 400cc, four-cylinder Honda engine in stock, and so we decided to use it.” So with a few small tweaks, a thorough tune, new electronic ignition and a polish, it was time to assemble. The wheels were chosen via some good old Italian design serendipity. “We were mounting these ‘lenticular’ wheels on a bobber for a client when Giorgio, one of the three partners, finds himself in front of the bike with one in his hand. Eureka!”

Inspired, the boys decide to ditch the front stoppers and mount the discs to both front and rear wheels, with the front one small enough to leave a halo of spokes showing around the periphery. “And so we came to the Saddle. With enough ‘wow’ already in the bike, a basic flat design was chosen to keep eyes focused where they should be.” Then a handcrafted 4-into-1 exhaust was fashioned from recycled pipes, and was matched to an aluminium can front number board. Is that the sound of opinions I hear splitting? You betcha. The end result? A bike that snubs its nose at the expensive, eye candy bling of most shows with a breath of fresh air, a sense of humour and a refreshingly lo-fi approach. And all for a fraction of you average trailer queen fodder. Leave it to the Italians to see beauty where the rest of us saw broken bits and pieces. Bravo!