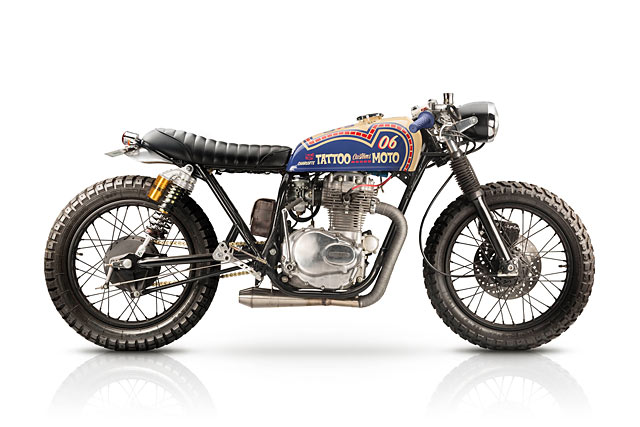 When it comes to a custom builder’s inspiration, we thought we’d seen it all. Bikes inspired by Japanese swords, lightspeed spaceships and sociopath hit men? Been there, done that; as with most truly creative pursuits, inspiration can come from almost anywhere. Then along comes Tattoo Custom’s Rudy Banny and his hopelessly stalled Honda CB360 project. Six months of head-scratching, face palming nothingness… and then a beautiful lightbulb moment hits him in a way he could have never expected. “We took a brief hiatus building bikes to focus on the Ad Agency side of the shop,” says Rudy Banny, Tattoo’s Founder and Creative Director. In a nice twist on the usual shop set-up, Tattoo’s both a custom shop and a creative studio that makes ads for moto clients. “Our build from earlier in 2017, ‘Das Spaniard’ took the top prize at the Raleigh Eurobike Show earlier this year”. Wanting one last hurrah for 2017, they rolled up their office sleeves and got to work on a 1974 Honda CB360 that had been hanging around for a while, clearly not getting the wrenching attention it was due.

“We found two of them on Craig’s List, a few miles down the road. It was a classic story of a little old lady whose husband stuck them in the basement, almost 40 years ago, when it was decided that riding wasn’t going to be their Father & Son activity. They each had less than 3000 miles on them”. When we asked them what their inspiration was, Rudy was quick to answer. “Discontent. Originally, we kept the bike pretty stock with the exception of a few simple mods: pipes, seat, ignition.  And we tried to be good with that, but it just wasn’t enough. It never is. So we tore it apart and reimagined it from the ground up and on the fly. No plan. Record scratch…this proved to be a lot tougher than expected. We couldn’t find the soul of this bike; it didn’t seem to have a purpose or a personality that we could tap into and build upon. So we stared at the bike, up on a rack, for a solid 6 months. And still nothing”. Nothing, until his 18 year-old daughter said she wanted to start riding. Finally he had the perfect starter bike and a real purpose for the build. By all reports, Gracie’s quite sophisticated and stylish, so clearly the Tattoo team were going to have to build something to match.

“It totally inspired me,” says Rudy. “First thing we did was stretch the swing-arm 3.5” to give this bike a lower look without having to modify the suspension too much. We chopped the back end off and welded a new frame-loop to fit our favourite off-the-shelf NitroHeads seat, which sits on top of a sleek seat tray that houses all the electronics”. They decided to keep the Honda OEM rear fender, but shortened it up so it sat high off the rear tire. And what with Ohlins being the shop’s go-to shocks, the choice of rear springers was a real no brainer. “Then we black powder-coated the wheels and wrapped them in some gnarly Heidenau Scouts. When it came to the exhaust, we fabbed up a tidy little 2-into-1, capping it off with a reverse cone shorty”. A new aluminium triple and a headlight bucket with a built-in speedo keep the cockpit simple; a necessary step to ensure nothing clashed with the cafe’s out-there paint. “And speaking of the tank, what a pain in the ass it was getting this damn thing painted! When first deciding what to do paint-wise, one of the guys turned up with a tank that was designed after a Mexican beer label. We loved it, so we took it and made it our own. It was type heavy, so we searched for an old-school sign-painter and we quickly found out what a truly lost art it is. And the few guys that still do it are either over-booked or too busy doing bike shows”.

[superquote]“And speaking of the tank, what a pain in the ass it was getting this damn thing painted!”[/superquote] They soldiered on, but the deadlines promised from painters were continuously broken. Weeks turned into months. And months turned into the best part of a year. “So we moved on to every bike builder’s plan B; we did it ourselves. We went to the ad agency side of the business, had Tattoo Projects’ Associate Creative Director & Senior Graphic Designer draw it up themselves as vector art and sent this off to be converted into decals. Then we just applied them to the Honda and a few layers of clear coat sealed the deal”. And what a deal it is. We hope Gracie likes it as much as we do.