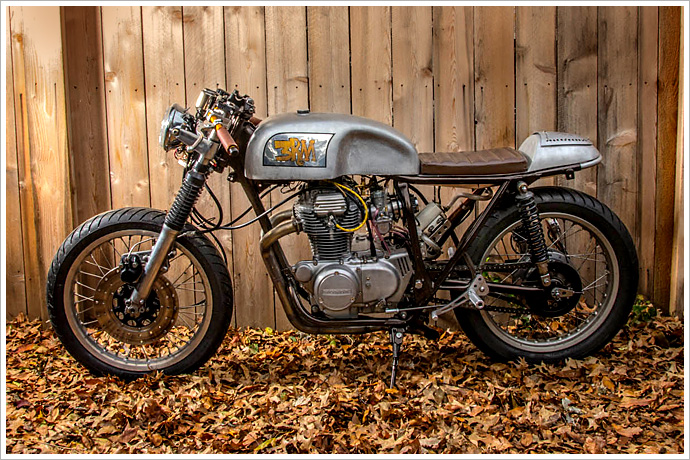 Custom bikes are a challenge that many of us have tried and failed. Whether it be a lack of time, money, skills or a combination of all three, there’s many more projects out there that get sold as spare parts than those that make it to the end. So imagine a project involving four different guys in four different US states that decided to build separate bits of a whole bike and then meet up to put it all together. In three days. At Barber Vintage Motorcycle Festival. Doomed to fail, you think? Think again. “The 3RM project really started out as friendly fire between Junior Burrell from Retro Moto and myself,” remembers Logan Miller, owner of Rust Revival. “I had built the first café project 2 years prior and Junior had no problem unloading his big Texas opinions on it. He’s a harsh guy but he is honest and has incredible skills. I deeply respect his thoughts, hard as they are. I met Junior at Barber in 2012 and we’ve kept in touch on somewhat of a brotherly basis ever since. We’re close and we’re honest with each other. I think that’s a big part of why we enjoy each others company so much. This industry is knee high to a headlight in bullshit, so honesty goes a long way with us.” “The build was innocent enough at first. Junior was going to build a new seat for it and I was going to rebuild the motor. After some typical top end oiling issues, it was only a matter of time before she went. A few dozen text messages and several hours we had ‘jokingly’ designed a completely new bike and called it the ‘3RM Project,’ meaning Rust Revival and Retro Moto. At some point the conversation turned from late night joking into a serious discussion on whether or not we could build a bike several states away and then assemble it at Barber. Keep in mind, Barber is only a one weekend event so we would have only 3 full days for assembly. Somehow, the joke had turned into a challenge and we had accepted. To make matters worse, we decided to make this a build between friends. We wanted to challenge ourselves as builders and see if we could pull it off.

The scene was set. Four Guys in four states would do their part in just a few short months and then meet at Barber to see if it would all fit together. Junior Burrell fabricated the tank, seat and exhaust. I rebuilt the motor from the ground up and took care of the frame. David Kiggins from DEK Performance built a whole new suspension set up and front end. Kiley Owen from Kanticoy Designs would fabricate a new oiling system to oil up the top end and eliminate the lubrication issues. He also kindly provided the garage where the bike was assembled.” “When we arrived in Alabama the atmosphere was great. A lot of people were like ‘where is the bike?’ and their jaws hit the floor when we pointed to a pile of boxes sitting next to the lift. I don’t think people were expecting us to literally start with nothing. The crew arrived at Kiley’s garage around 11:00 that night. We unpacked a few things and since we had all driven from Kentucky, Texas, and Pennsylvania, there was no rush to start building a bike.

But Friday night was a different story. We rolled in from a day at Barber and just got to it. Looking back it was pretty amazing, actually. We didn’t get a game plan together or talk it to death. We literally just started building the thing. The Do The Ton family was on hand, thanks to Kiley and his wife Denise letting them stay on the property. The garage was buzzing with people. To say that for guys built this bike would be kind of a lie. The overwhelming support from the DTT community is a major reason this actually happened. At any given time, there were probably ten guys working on the bike. From grinding parts to lacing wheels, fabrication brackets to tightening bolts. It was like having an orchestra with 4 conductors making this big, beautiful sound.” “At the end of the weekend we had managed to turn our boxes of parts into a living breathing machine. Allowing ourselves only one or two hours of sleep a night, we worked ourselves to the point of exhaustion. The bike was finished and running, but more importantly we had achieved what we set out to do months before. We wanted build a functional and solid bike that would run as good as it looked. None of us were interested in dropping another ‘art bike’ on the floor. It was always about challenging our skills and creativity.”